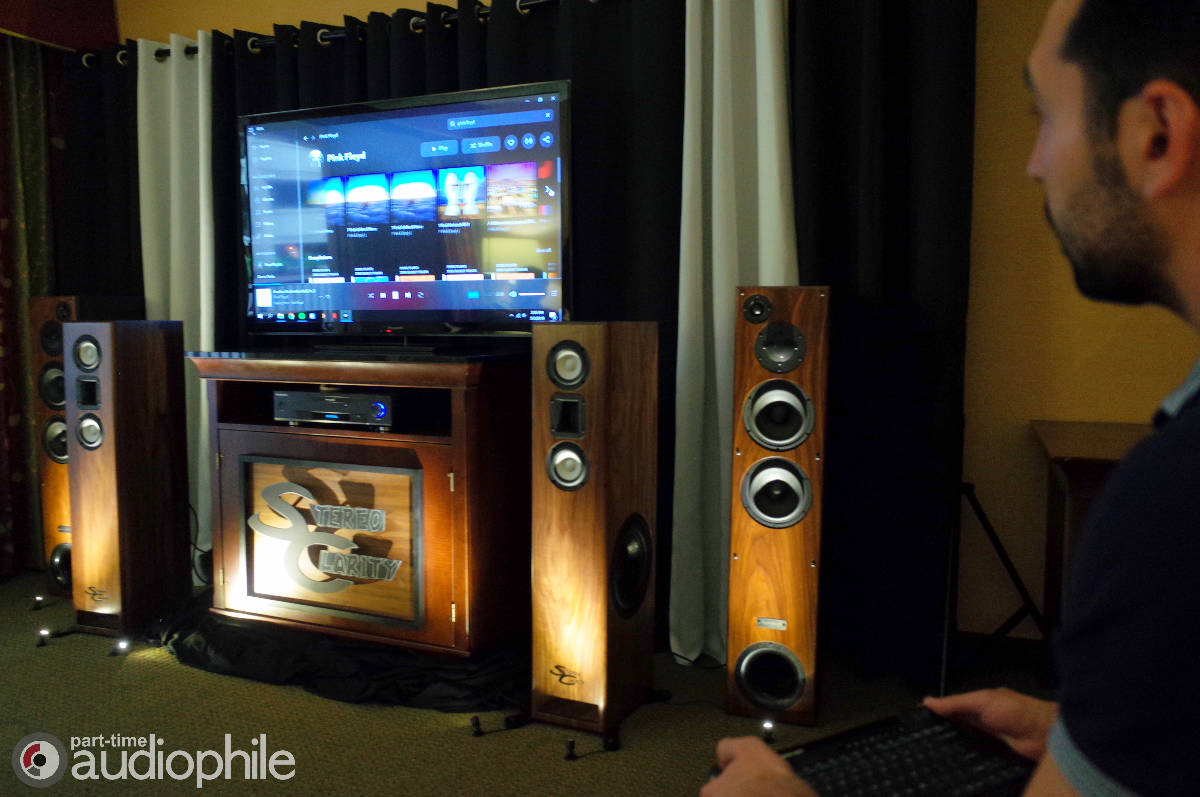 DALLAS (PTA) — Steven Solazzo is running double-duty at Lone Star Audio Fest, as he is not only the owner and exhibitor of Stereo Clarity, he also serves crucial role as one of the audio show’s organizers. 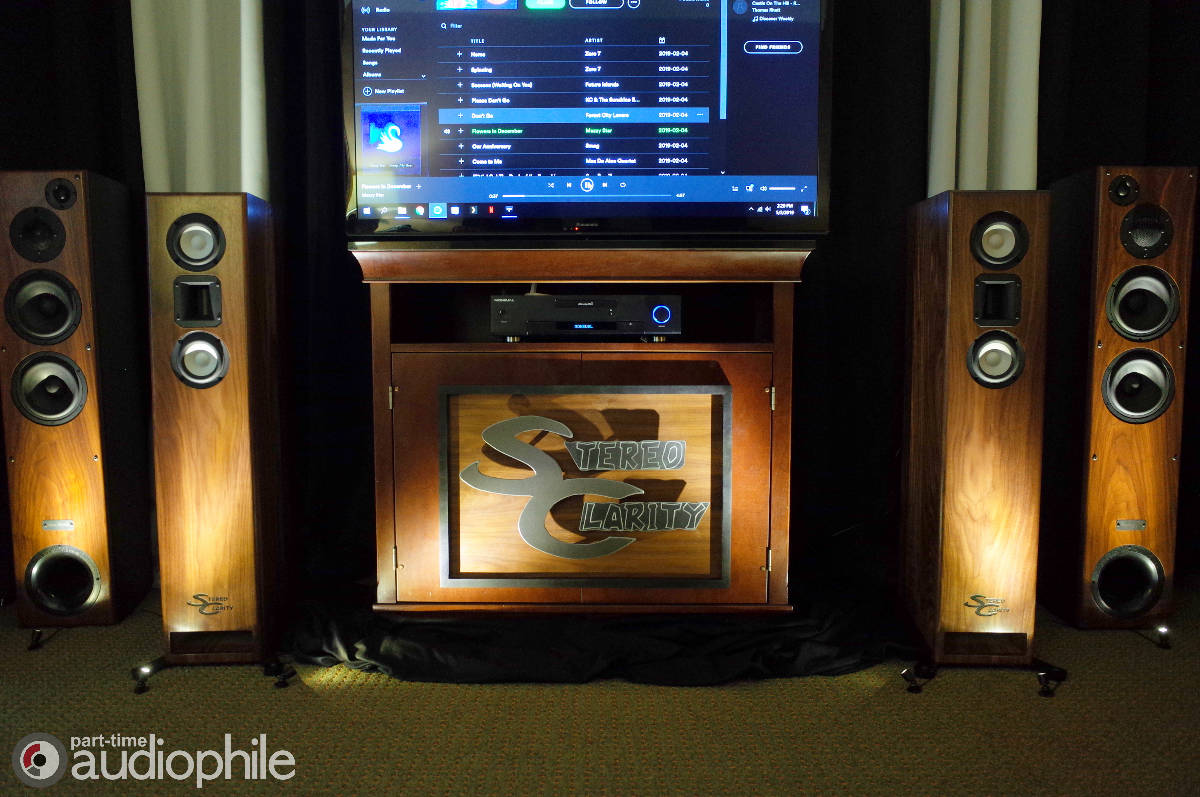 Using a custom built one-box media server/DSP/amplifier, Stereo Clarity was keeping me glued to the room. Scrolling through the streaming services for more than a dozen songs. Most impressive was Steven’s MTM w/Sub configured tower speakers named the Athena 4.

The Athena 4 is a true two-way MTM passive loudspeaker, that employs a single Fountek NeoCD3.5H horn-loaded ribbon tweeter, two SB Acoustics 4-inch ceramic come mid-woofers, a single CSS SDX10 subwoofer, and a 500 watt Bash plate amplifier — per tower. The Athena 4 uses a dedicated chamber to house the upper MTM portion, crossed over from the subwoofer at around 150Hz, and at 2,500Hz between the mid-woofers and tweeter horn. Impedance values for the upper MTM cabinet are at 89db. Cabinet volume dedicated to the subwoofer is at 1.5-cubic feet, and box tuning is at 24Hz, which is 2Hz below the subwoofer driver’s free air resonance.

This loudspeaker should be looked at from the bottom frequencies up. If you don’t have room for subwoofers, but need big bass — these are not on your list, these should BE your list.

The OneSource Media Server (w/DSP and amplifier) Steven Brought to Lone Star’ is a custom built-to-order Windows based PC, that is fully customizable with RAM, storage, and software. The model as optioned on display at Lone Star Audio Fest contained two 4TB drives, a mini-DSP unit (with minimal EQ), and a stereo 250 wpc ICE power (Class-D) module mounted in-case. A true one-box does it all media server/DSP/amplifier. The model used at the show has been running nearly non-stop since it was built in 2012, and has only seen itself powered down during travel between demos.

Also on static display while I was visiting the room, were Steven’s other loudspeaker, the Icon 4. The slender and beautifully finished Icon 4 is a completely passive three-way designed floor-standing loudspeaker, with four total drivers. Starting at the top, a 1-inch SB Acoustics silk dome tweeter, a 2-inch Dayton Audio mid-range, and two CSS 7-inch mid-woofers. Overall efficiency for the tower is rated at an amplifier friendly 91db. Other features include a solid walnut baffle, and a Rhino lined enclosure.

Ridiculously strong levels of dual-subwoofer goodness filled Steven’s room and the atrium corridors. The power on hand with dual-500 watt subs is not to be underestimated. By far the largest and fattest sounding bass at the show. It was truly a “where are the subwoofers?” display. The upper frequencies were uber-smooth, laid back, and ear-friendly. The stereo subwoofers have adjustable gain, so blending of them into the room or to one’s taste is easy to do. For this show, we ran them high. I can’t think of a loudspeaker that provides so much powered bass, in such a small footprint. 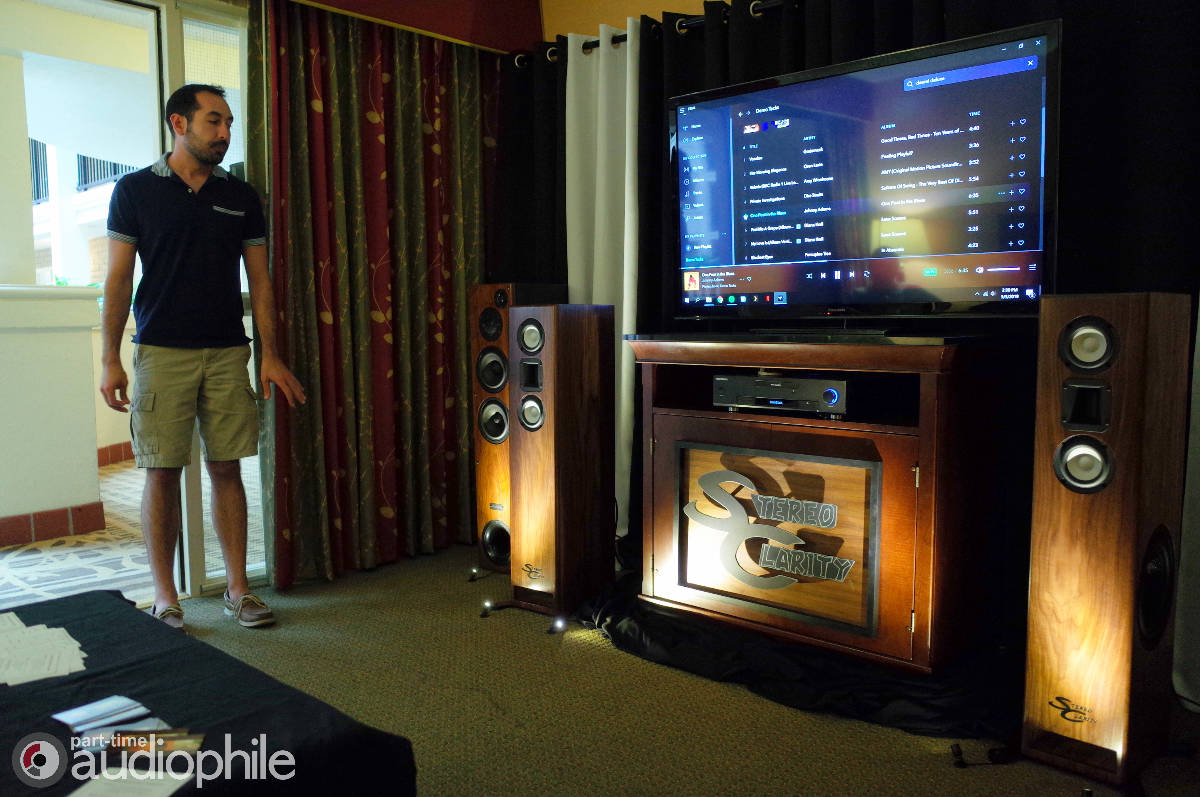 CHICAGO (PTA) — If it is true that we were all created in God’s image, some of us inherited more godlike ability than others. In terms of the ability to work miracles in the arena […]

DALLAS (PTA) — Everything I love about audio shows seldom has to do with audio. As for the Lone Star Audio Fest 2019 in Dallas,Texas, it proves itself as one of the more rambunctious of […]