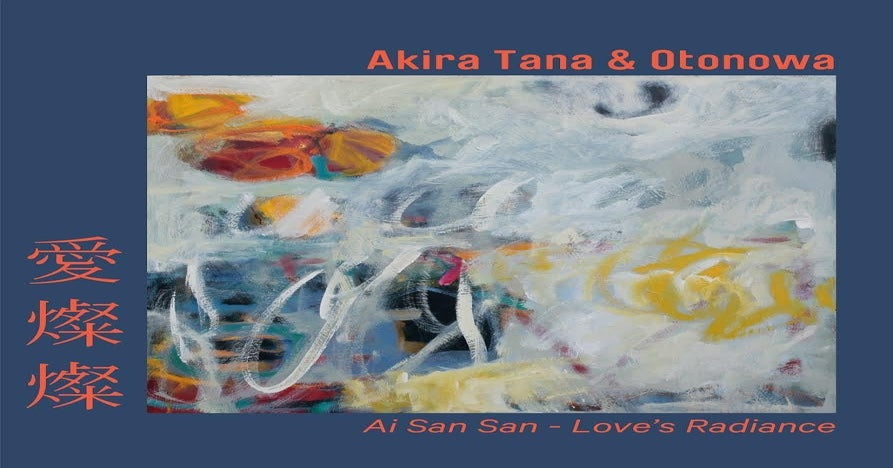 Over the last couple of weeks I’ve listened to a lot of jazz that employs folk music from other cultures, most notably Peter Lin’s New Age Old Ways which borrows themes from Lin’s Taiwanese heritage to bring another compelling layer to his original compositions. Drummer Akira Tana and Otonowa, his quartet, are using traditional Japanese themes and instruments to bring the same global feel to Ai San San (Love’s Radiance),  a set that’s dedicated to “the communities devastated by the earthquake and tsunami that struck Japan in 2001.” Otonowa, formed to address the need for awareness of Japanese natural disasters and now three albums into the effort, uses some of the oldest and most beloved harmonies from Japanese culture to comfort the victims and to pay homage to the resilient spirit of these people.

Akira Tana is quite famous in both Japan and the jazz world–he’s played with greats such as Sonny Rollins, Sonny Stitt, Zoot Sims, Milt Jackson and Art Farmer. He formed Otonowa to feature American jazz musicians with Japanese heritage such as Masara Koga (saxes, flute and shakuhachi), Art Hirahara (piano) and Noriyuki Ken Okada on bass. As a straightforward jazz quartet they shine and move as one with a dense approach that sounds very traditional at first listen. There are long stretches of Ai San San where the core group moves within a singular jazz structure, which almost acts as a reminder that there are no gimmicks here–only heart.

It’s the occasional addition of Japanese instruments–the aforementioned shakuhachi, fan drums, koto and taiko–that reinforce the folk music aspect of Ai San San and bring the message to the forefront. Shoko Hikage, Kenny Endo and cornet player Tetsuya Tatsumi are brought in to build another layer of sound to Otonowa, and this allows Akira Tana’s original compositions to emerge as more than just a mash-up of genres. Tana is quite a showman behind his kit, and his able to bring considerable imagination to this ambitious project–he’s equally adept at confirming the jazz veneer as well as the underlying tributes and deep concern for his homeland.

Ai San San is far from a moribund exercise. Otonowa is, at the very least, a lively quartet (or septet) with plenty of unbridled energy. That vivaciousness is one of the key ingredients to the whole being far more than the sum of the parts. Each musician is able to improvise freely outside of the cross-cultural themes. (Hirahara, in particular, has a particularly rich and melodic approach to the keyboard.) When the Japanese elements appear, however, it’s exhilarating. Otonowa isn’t the first jazz ensemble to mix Japanese folk music with jazz–I can point you to a few Three Blind Mice releases from the ’70s that do the same–but there’s a honorable purpose within Ai San San that never hides behind the jazz.

The best jazz CDs of 2021? Vinyl is the most popular and desirable listening format. Do you agree? When it comes to jazz, that means reissued vinyl of largely dead jazz artists, since the majority […]

Some of my favorite jazz trios are sax trios, proven by my continuing awe at classic LPs such as Sonny Rollins’ Way Out West. I feel as if they’ve been rare lately, and perhaps that’s […]

Trombonist Peter Lin seems to have his finger on the pulse of a jazz from a certain time, not so much the late ’50s as the early ’60s. He’s more Impulse! than Blue Note, less […]