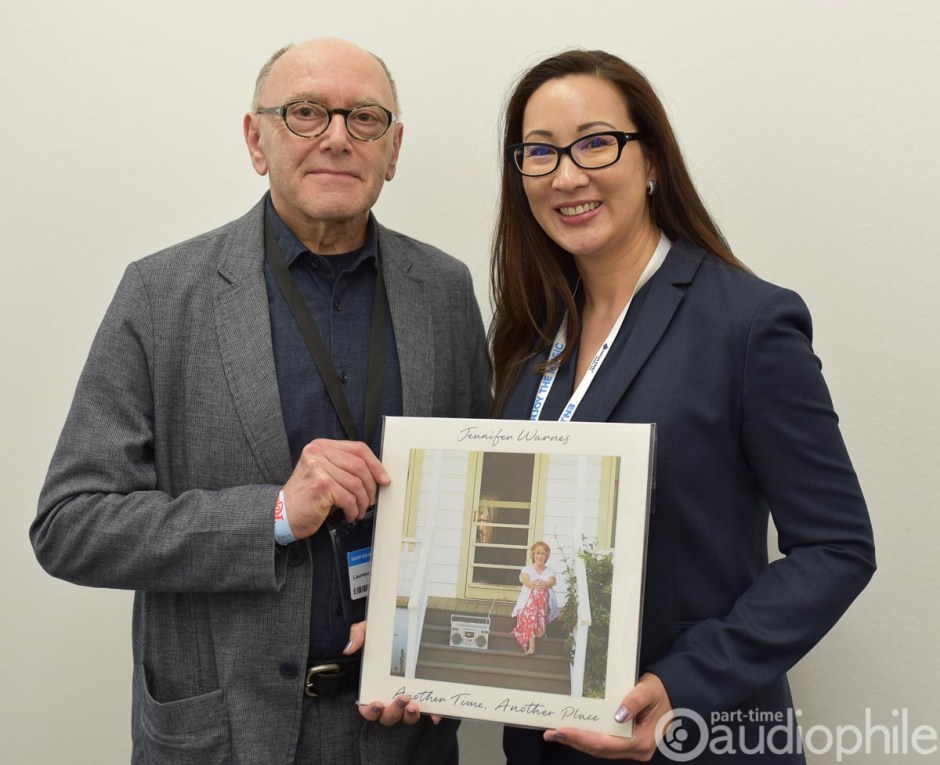 Jennifer Warnes, Another Time, Another Place: One of the great things about going to shows is discovering new music.  Lately, I just have happened to be buying a lot of albums from the Impex label. Some of the classic Three Blind Mice titles seem to have breathed new life in these great sounding pressings which seem to transport me back to 1970s Japan and some superb micing done in a studio.  Recently I picked up the Impex pressing of Michel LeGrand’s Legrand Jazz, a superb jazz performance that features Miles Davis.  This 2-record 45 rpm set is really superb and the best I have heard this album.  Likewise, the Live at the Blackhawk album featuring Miles Davis is also excellent.  In the credits of these, you see Abey Fonn listed as producer.  I always thought it would be interesting to talk to Abey and at High End 2019, I got my chance. 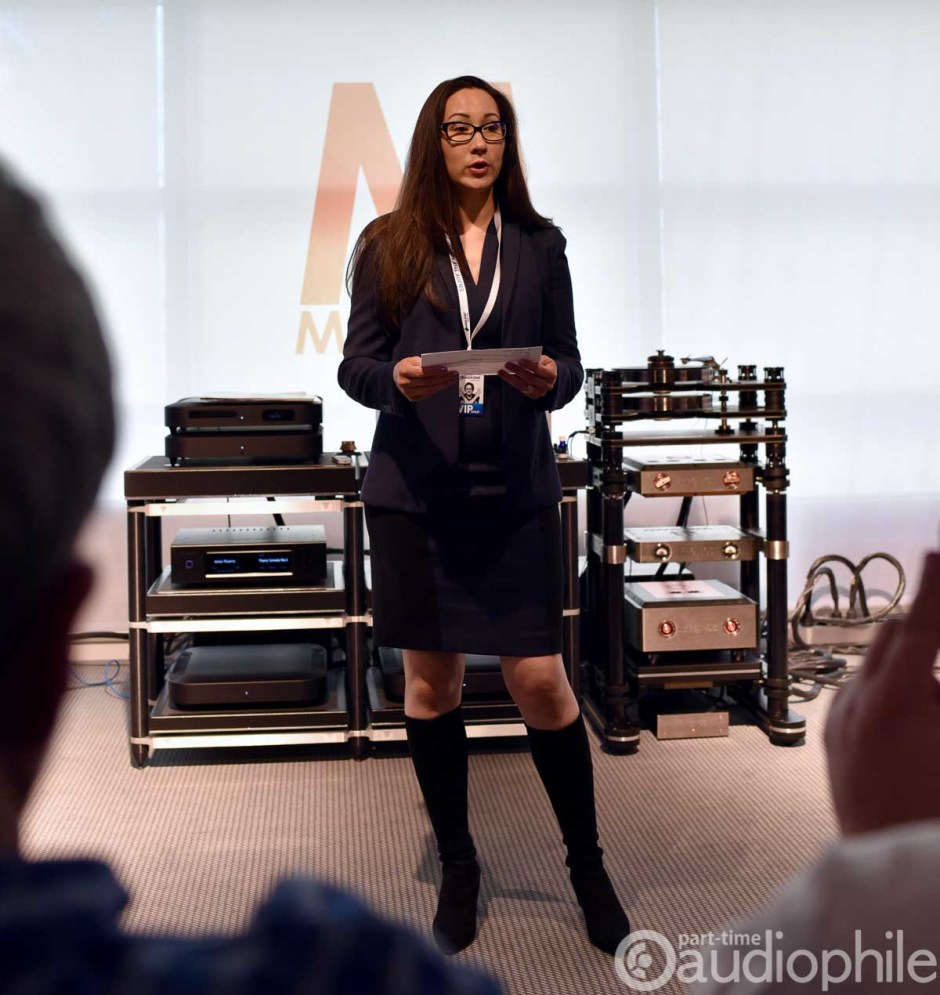 Abey Fonn was going to some of the better rooms and playing the new Jennifer Warnes album, Another Time, Another Place.  Also in attendance was Laurence Aston, Warnes’ manager.  Between listening sessions, Abey and Laurence agreed to answer a few questions from me.

Lee:  How did this come about?  How did things align for the album release after all this time?

Laurence Aston: There was a period of loss of friends and withdrawal but some meetings with BMG management coupled with a creative and business need creating the right circumstances.

Lee: One impression I had along the way was that Jennifer, for all her talent, might be a bit of a diva.  The long time between recordings, the perfectionist masterings…do I have this wrong?

Laurence Aston: In fact, Jennifer is not a diva at all, she is a really genuine person just deeply involved in every aspect of the project.

Abey Fonn: She is not difficult at all but she is proactive, involved in every step of the album production.  But she is also keen on ensuring that everybody gets paid and gets paid fairly.  She watches out for everyone involved.

Lee: Well the results show.  The acoustic instruments on this album are wonderfully presented.  What do you feel led to this natural sound?

Laurence Aston: Roscoe just knows Jennifer’s voice and style so well.  Roscoe translates her voice and everything so well into the recording.  There is a level of trust there.

Lee:  For us audio nerds, tell us a bit about the process.

Abey Fonn: There was a shortlist of 55 songs collected, of which ten wound up on the album.  The mastering took around a year and a half, very careful production, and the mastering was done with Bernie Grundman, who is also a long-time collaborator and he cut Famous Blue Raincoat.  There were no electronic effects, reverb, echo chambers, etc. used at all on this album.  It’s a simple, clean recording.

Lee:  This albums feels more personal to me.  Jennifer is now in her 70s but her vocals remain amazing.  In fact, they sound like she hasn’t aged!  Why did we have to wait 17 years to hear this talent again?

Laurence Aston: Jennifer suffered a lot of loss in these years, but it led to songs of a deeply personal nature.  The time is right for the album now.

Abey Fonn:  There are many personal connections here.  In the 24 page insert are photographs including the front steps of a farmhouse where her mom used to ride her bike to get fresh milk.  Jennifer is a very loyal and kind person who is very involved in supporting animals and the environment. I  think there is a possibility Jennifer will be recording again soon. 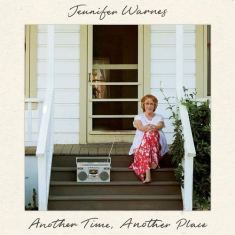 Alon Wolf, who heads Magico, was impressed as he listened in his room with the new M2 speakers playing the album.  I’m a Dire Straits fan so for me, the closing track, a cover of “Why Worry”, was especially meaningful.  This is a real treat for the ears.  The perfect guitar tone, the decay of the notes beautifully natural, the instrument separation and vocal layering on this record sounded spot-on in all the tracks I heard across several systems.  But the “Why Worry” cover on the M2s was magical.  A superbly musical presentation from both LP and playback.

Indeed, we need not worry as audiophiles.  We have talent like Jennifer Warnes returning after 17 years sounding as spectacular as ever.  And we have fine people like Abey Fonn, Laurence Aston, and Bernie Grundman making sure the beauty of her voice and the other instruments come through as clean and natural as possible.  The LP of Another Time Another Place is out now but Abey says the SACD is coming in eight weeks.  I suggest you get a copy whatever your digital or analog proclivities.  You won’t be disappointed. 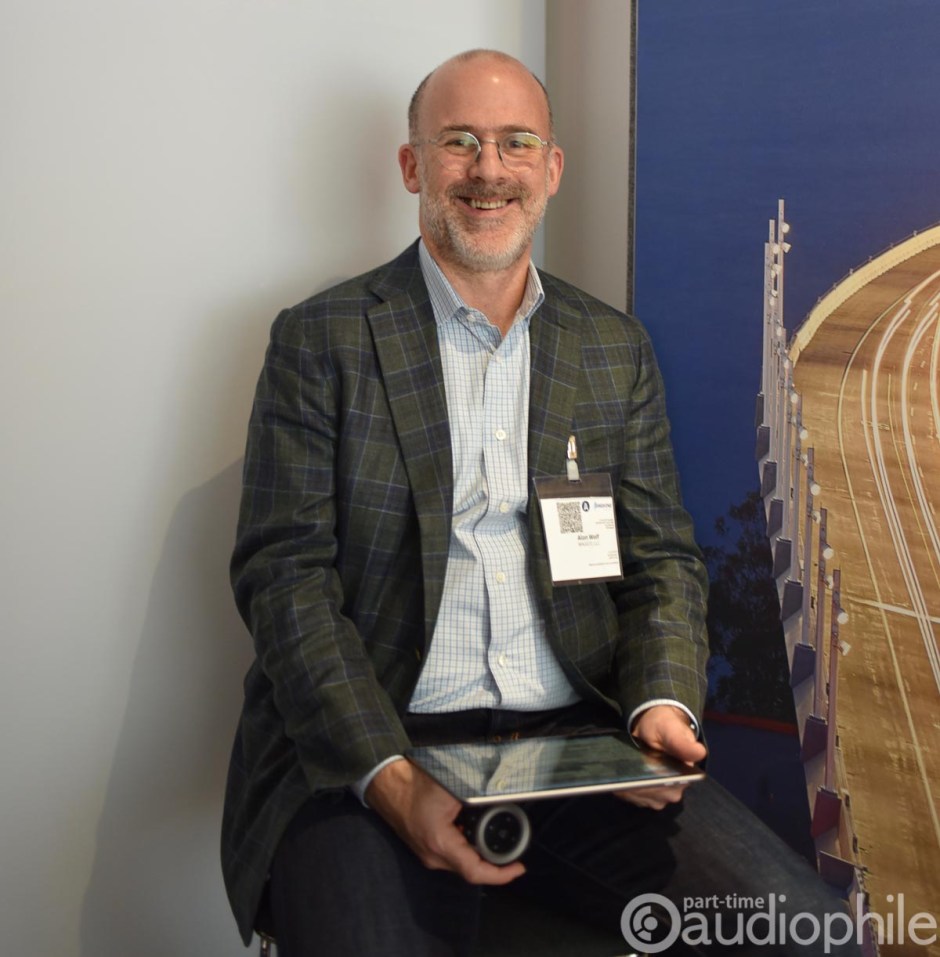 The McGary Audio and Salk Sound room was my first stop on the second day of the 2019 Capital Audiofest, and within seconds I realized I made a very wise decision. The combination of the […]