One of the things that stood out about Munich was the absolute beauty of select gear.  We saw breathtaking speaker quality in John DeVore‘s O/Reference line; we saw amazing Forte turntables from EAT; and we saw gorgeous tape machines from the team at Nagra. 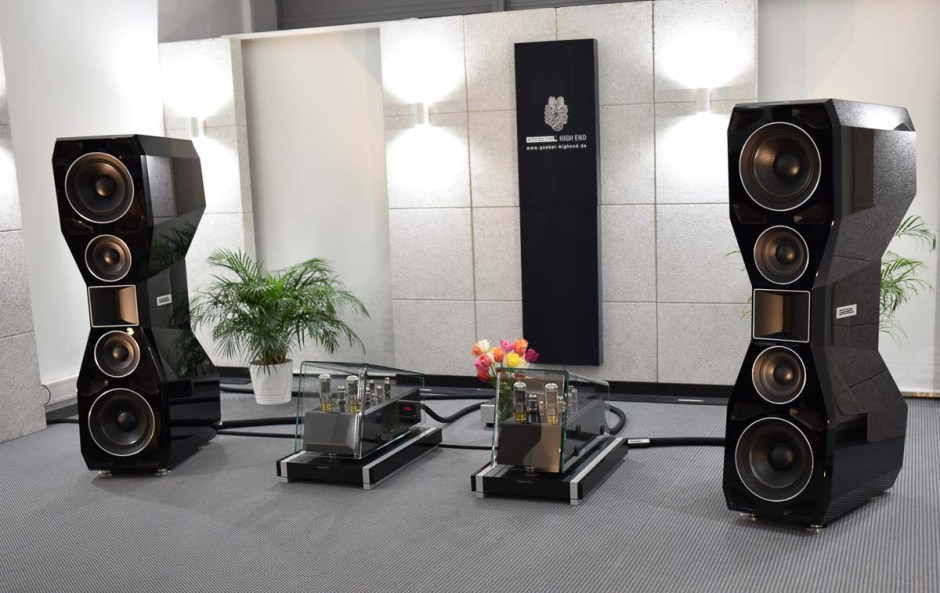 But if I have to select the most beautiful system at the show then it was Timo Engstrom‘s mono tube-amps with Oliver Göbel‘s Divin Noblesse.  To further impress, someone had placed gorgeous flowers in a variety of colors behind the amps.  If you are going to get speakers this big, these artful amps and flowers really created a visual feast for the eyes that a spouse would approve of. 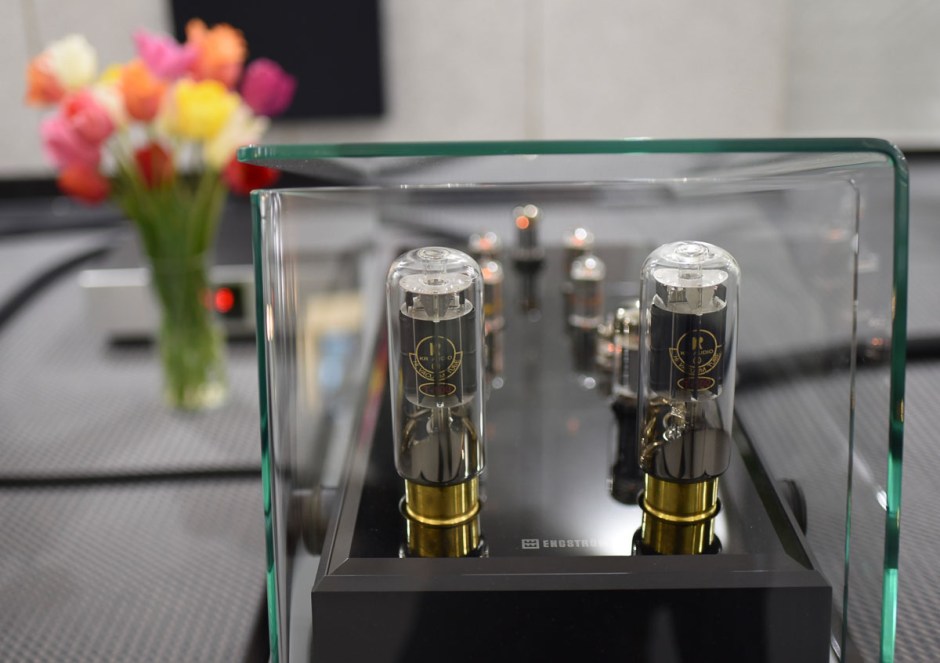 Even better was the incredible sound.

We heard these speakers just recently at AXPONA with wonderful CH Precision gear but this presentation was also excellent.  This was the first time I had seen Timo Engström‘s “Eric” monoblocks, a statement amp for Engstrom.  Using beautiful gold KR tubes, the amps seemed just the right fit with the Divin loudspeakers.  As Engstrom describes it:

The power tubes are T-100 from KR. These are a modern version of 845 with oxide cathode instead of tungsten cathode. Driver tubes are 6L6GC in triode connection. Gain tubes are EC8010 a frame grid tube with high gain and low inner resistance.

Named after a Swedish choir conductor, these amps had dynamics and detail.  They also had a smidge of tube warmth in the very best way. 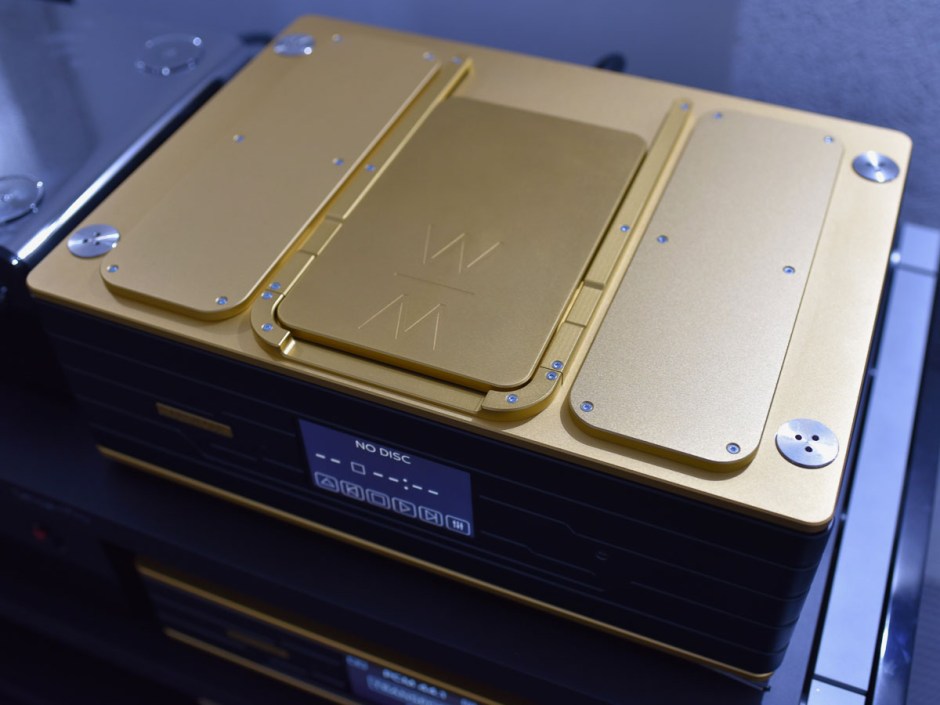 Sources were top drawer.  On the analog side, Oliver had the Kronos Complete Analogue Solution with a ZYX Universe 3 cartridge.  On the digital side, the source was the Wadax Atlantis DAC, streamer, and transport.  Both of these sources sounded excellent.  The Atlantis DAC from Australia was new to me.   It’s a dual mono design with native DSD and PCM and can decode MQA files.  Construction is complex as it includes over 4,000 parts and has a fully discrete analog output stage.  Total jitter is a super low 12 femtoseconds from 1-100khz which Wadax claims is the lowest in the industry. 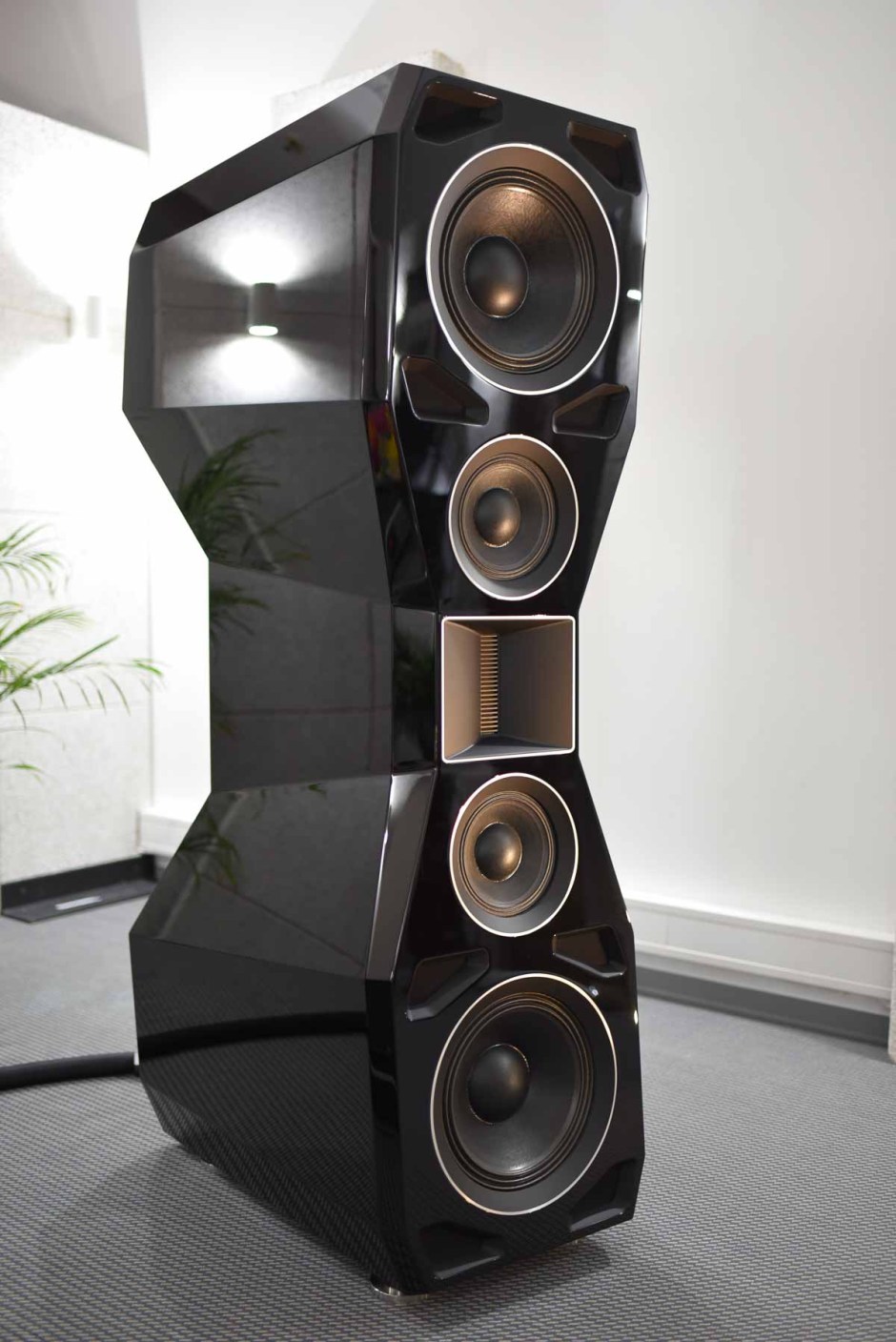 I view Oliver as a bit of a wunderkind.  We have discussed the company’s “bending wave” technology in the past here, but I wanted to sit down with him and Elliott Goldman, his U.S. distributor, at Munich.  We grabbed a table in the outside atrium and I began firing away at the questions…

Lee:  Oliver, you seem to be real passionate audio and music.  What is your background and what led you to become a high end speaker designer?

Oliver:  It really started as a kid.  My family has always had music and instruments around.  I took violin lessons as a kid.  My father played trumpet.  From an early age I started building electronics and that led to a fascination and some early knowledge on loudspeakers.  Later I collected and read literature on speaker design.  I eventually went to university and got a degree, a masters in electrical engineering.  I spent some time working at Siemens using this degree but the fascination with music and reproduction of it stayed with me.  I later formed a company to commercialize the bending wave technology and then a company to create high end products from it in Goebel Audio.

Lee:  You also seem to have created some high quality speaker cables.  Elliott lent me some of the LaCorde cables briefly and I was impressed with the quality of sound.  What technology are you using there?

Oliver:  Well it’s a proprietary metal alloy we use and I’m not going to say much about that. But in addition to this unique alloy, we use very solid connectors and a large, heavy aluminum housing to decouple the cable from the ground.  We use special spades on our speaker cables and some Furutech connectors that we modify.  Each type of cable uses a different connector and different shielding that is tailored to the function of the cable from analog to digital to power requirements.

Lee:  So the past three shows, I have heard some impressive transparency and dynamics in your speakers.  What is Goebel doing differently in the speakers to get this level of sound?

Oliver:  It’s a number of things.  We are leveraging what we learned on the bending wave square membranes to improve the drivers in our large speakers like the Noblesse.  We focus on reducing resonances.  We seek to apply bending wave surface technology to lower the cone breakup of a driver.  This involves all aspects of the driver including even such things as the gluing of the dust cap.  This way we preserve a broad frequency range. We also focus on time to phase metrics.  As close as we can get to perfect is the goal.  We have to control these breakup modes.  On the woofers we don’t have one port like most.  We use symmetrical ports so there is no torquing on the driver.  We want that perfect “stop and start” motion of the cone to be as perfect as possible.  Third, we have heavy quality control.  We work on everything including the design of the spider behind the driver’s cone.  We even have our own anechoic chamber in our factory and access to a world class one at a German university for further work that is 10 x 10 x 10 meters big.

Like our hall conversation at AXPONA, I leave the discussion with Oliver deeply impressed by his grasp of the science; he is bringing genuinely new thinking to loudspeaker design. We heard this in Munich when Oliver played dynamic works.  We heard the music render transients at impressive speed and naturalness.  No doubt the Wadax digital sources and gorgeous Eric amplifiers from Timo Engstrom were contributing as were the mysterious alloys in the LaCorde cables…but at the end of the day the speakers were presenting a beautiful analog wave.  This was easily a Top Three room at Munich for me.  I continue to be very impressed by Goebel.

by Matthias Brötzmann At the High-End show in Munich,

May 20, 2017 Mohammed Samji Munich 2017 Comments Off on High End 2017: Michael Latvis provides the skinny on the HRS Vortex feet

Tweaks are aplenty in this industry, some that work, and others less so. But when it comes to reducing vibration, I have been a longstanding believer. At T.H.E. Show @ Newport, HRS introduced the Vortex […]

I’m moments from liftoff, headed back to Munich Germany for this year’s ultra-extravaganza that is the pinnacle of the annual “audio show circuit”. I am psyched. I’m freaked out. I’m gonna be a total zombie. My […]