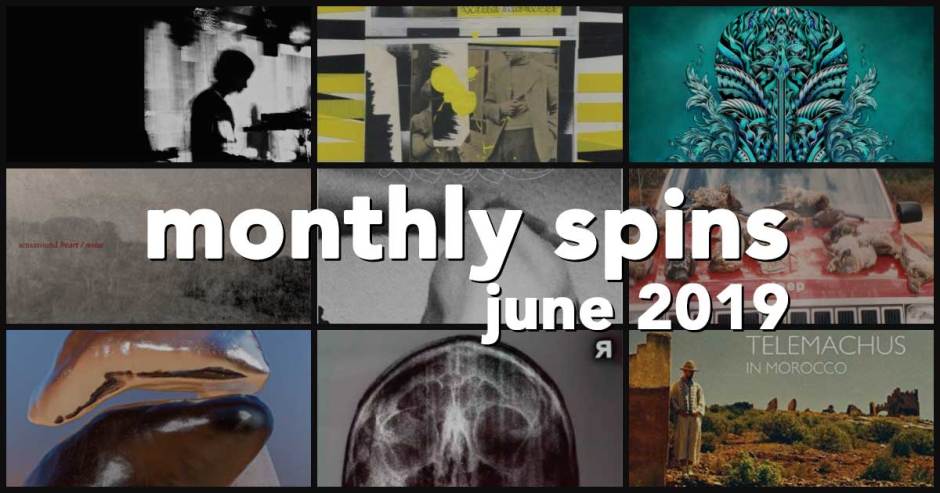 I guess you could call my quest for new music an obsession. I’ve had it since I was ten and often feel transported outside of myself by certain albums. It is a never ending quest for the divine sounds. Not that I discard and forget about old records, but sometimes they embody a particular feeling, of a passage in my life so intense that the record becomes the soundtrack to that emotional space. I feel this way about Radiohead’s In Rainbows, and although it’s one of their finest, I have to be ready to go through with playing it again. The fact that so much of our lives seem tenuous, the future so determined, it amazes me that artists are still producing and bringing beautiful things into this world.

I think this was a featured item on Bc and I listened to the whole thing without realizing it and felt like I wanted more. Bifurcated, blissed out post-rock. Aaron Phillips arranged several improvised sessions with Laraaji, Clarine Jensen and Susan Alcorn, who are friends from NY studio Figure 8. These recordings were then used by Phillips to create the sound on Radish. In addition to his solo keyboard and vocal work, Phillips has worked with Julianna Barwick, The Building, Qasim Naqvi and The War On Drugs. There is a sense in Radish of the beautiful and the sacred, his personal sense of grief and at the death of a parent and the overall sense of calamity in general. The band on the Titanic played beautifully until their fingers were too numb to continue.

Right out of David Sylvian’s playbook, although it also appears at times like the quieter, less poppy, solo work of Peter Murphy, Dark Star Safari brings these fine musicians into a wonderful matrix of sounds and sensations. These guys are all working at the top of their game and it is their first attempt together as a group. Erik Honore contributed the lyrics, which were sung by Bang. If someone played this for me and said that it was the new David Sylvian album I wouldn’t think twice about it, and that’s not to knock there own remarkable effort.

With a deft ear toward the impromptu and the sinister, Errant Monks create a science fiction influenced and divine soundtrack to the rather rough life of its creator. At times dazzling as on opener Vigyen el az íz, the album seems suspended in space and a soundtrack for zero gravity montage. I don’t think you could dance to this unless your were in Berlin, even Prague.

File Under: tru dat is in the interzone

Not only has he been around for decades, but this is the first follow up, arriving 37 years after Vol.1. was released in 1981. A grin of a title, with its nods to the likes of Harry Smith’s Anthology of American Folk Music. Vol.2 The Canon continues with the tradition of translating an alien music he calls Nommo. His working theory is that an alien civilization made contact with early Africans who then influenced the music they made. I take all this with a wink and a nod. Call it speculative musicology, but you can also call it riveting and inventive, music that is at its heart about the trance and the ecstatic moment. And it is not plunder phonics because it evolves from electronica, now advanced greatly since his first appearance in the early 80’s and the references to Vangelis’s epocryphl Blade Runner OST.

Berlin-born solo artist spends her time between Berlin and Vienna. A student of “trans media arts” this is her first recording and she maintains a heavy touring schedule in Germany, Austria, Switzerland, Italy and Japan. With echoing gothic vocals and distorted modular synths, it is her voice that makes the most impact. Although she references a certain late 70’s, early 80’s stripped down German sound, she manages to create a space of originality.

Guided By Voices, Warp and Woof

File Under: my next guest needs no introduction

He’s 65 and still manages to be in top creative form. It is what it is, and it comes with the usual sense of the surreal and absurd as well as the sublime. Pollard’s relentless output of memorable songs that barely scrape the 1 minute mark, yet fill entire albums, can be a little overwhelming. If you are new to GBV just start with Bee Thousand and go from there.

File Under: the newest installment of this blessed improvisational duo.

On album no. 2 things go just about the same as last time and their first improvisations were astounding. Shahriyar Jamshidi is of Kurdish descent and plays the three stringed Kamanche while Raphael Weinroth-Browne does call and response on the cello. Both of these players are masters in their own right, playing in lots of other ensemble groups. What they have created here is as close to divine as you can get with improvised sessions.

File Under: Syd Barrett without the pop?

As you would expect from a Canadian master of God Speed You Black Emperor, Menuck’s collaboration with Kevin Doria is a vast musical universe of swirling and muted guitars, organ and god knows what else. their is an abundance of lyrics so transformed and twisted that rarely do they rise to the conscious mind. A set of prolonged dirges so evocative that I can almost understand the disappointment and sorrow he feels in the eclipse of humanity. From the titles of the songs: Do The Police Embrace?, Fight The Good Fight, A Humming Void, An Empty Place, Joy Is on Her Mount and Death is at Her Side, We Will (I believe he’s saying, survive), Menuck stakes out a gothic wonderland. A primal yawp into the wilderness, the void we teeter against. There is nobility and emotive grandeur to this project. Would you expect anything else but this from such a musician? If you listen to any track start with Joy is on Her Mount and Death is At Her Side.

This is an interview that begins in English at about the 3:06 mark.

I was a big fan of her early. lo-fi work, but on Designer, she’s upped her game enough that the audio and production values, not to mention the array of backup musicians, transcends the muted chanteuse/ folk French tradition she still resides within. Designer shows how her simplicity and straightforwardness is not thwarted by all the studio time and production wizards.

Telemachus doesn’t like repeating himself and this time the title says it all. Space jams with a mixtape, archivist’s glee. Ambient Moroccan street sounds, chanting voices and recordings from old documentaries about the empire’s colonies. Add in some night barking dogs signaling to each other. No one really knows what they are able to convey with barking alone. “The same pace as in biblical times.” the VO track proclaims. These clips are all taken from old, condescending English documentaries about Morocco. They work as a situational veiled critique and constant reminder that the musician is conscious that he is riffing a culture still considered “backwards.” As the VO loops in and out of the mix, the sampled indigenous instruments tell another story.

Luke Younger is Helm and he’s been at this long enough to break a lot of aural barriers. He takes us on long journeys in short segments. OST Blade Runner 2099 is not a bad place to begin the visual landscape. Ambiguity reigns here as well as a grim view of humanity’s future.

There are passages of pastoral restraint, and ambient interludes. Like his other work, Younger beguiles with a seemingly endless supply of sounds effects and perfectly attenuated pitch changes. The album needs to be heard as a complete and whole thing.

All of these players are considered masters of the improvisational form. All of them are explorers and subtle, and listeni closely to each other as the music is invented. It takes a lot of practice and a lot of careful and patient listening. Heavyweights Shoeb Ahmaad (samplers and effects), Alister Spence (Rhodes and effects), Raymond MacDonald (alto and soprano sax). Spence has been a two decade player in the Australian jazz scene and his friendship with Scottish improviser MacDonald.

Singles and Videos of Note

File Under: from a forthcoming album.

Lungfish: “Love Will Ruin Your Mind”

File Under: From a much-anticipated release

by Joe Surdna Quite a list for June. There is just so much amazing new music being made and recorded that it really makes me grateful because I can concentrate on listening instead of watching […]

Lots of late December and January stuff and some from Feb. The reissues are especially noteworthy this month. I hope you discover something that moves you. Please leave comments if you like something.