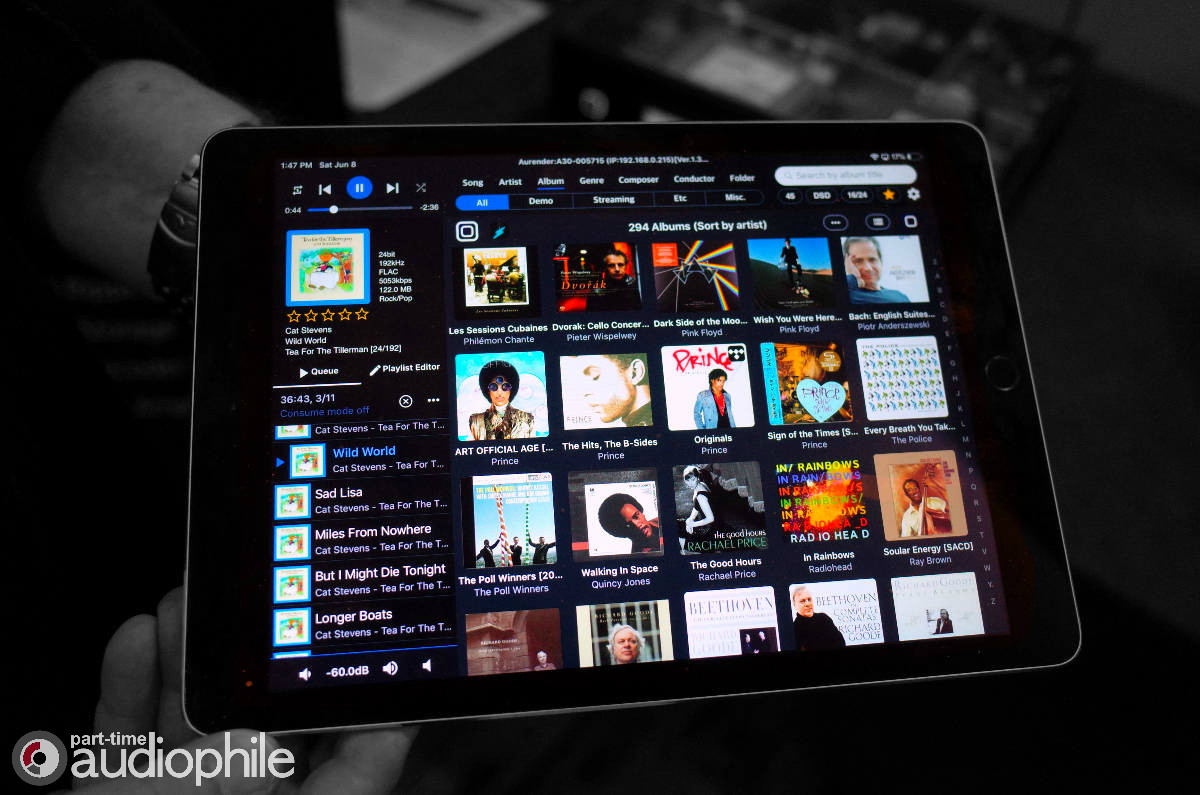 LOS ANGELES (PTA) — In the largest set of dealer-lead exhibits at THE SHOW 2019, Scott Walker Audio and Aurender had a static display of Aurender’s most popular offerings. While Friday’s wrap-of-the-show was taking hold, I decided it would be fun to examine up close the Aurender players on display, and delve deeper into what made them special, and more often the go-to digital source for many exhibitors in the audio show circuit. 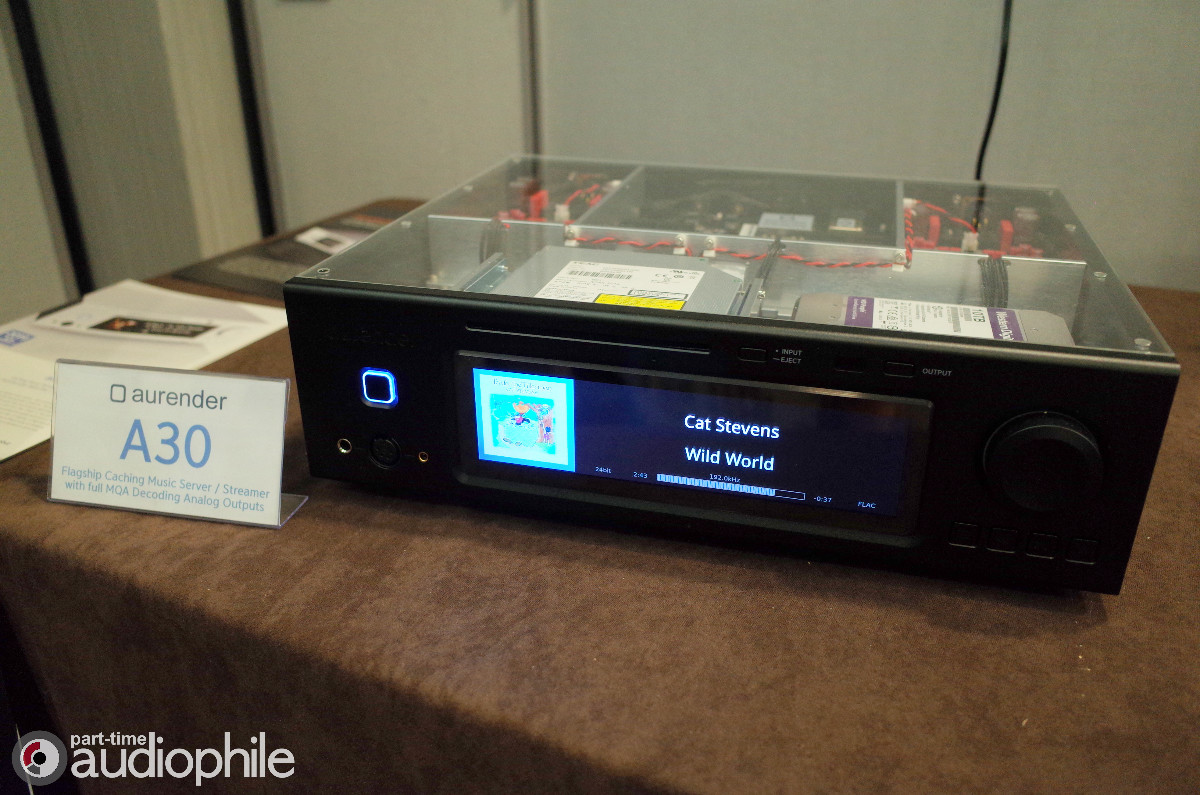 Aurender is a music server company that makes one-box-solutions that store and playback digital music collections of any resolution. The CD Player of the 21st century has arrived and it’s a music server, and in many systems — it wears the name Aurender.

What may set Aurender devices apart from the rest of the pack, is a well designed user experience that is often backed up by performance in both speed of the catalog, but also on the audio front. Both hardware and software are designed concurrently by the same design team at Aurender, so when it comes time for hardware and software to meet up and execute any process, it ends in a hand-shake not a fist-fight. The Aurender platform is by design a stable and predictable system. So with that comes a sense of practical reliability.

When it comes to Aurender’s product lineup, there are two distinctions easily made between the components. The ones that are digital-out and the ones that are analog-out. Currently there are three components in each category, that more-or-less fall into the old “good-better-best” hierarchy.

The entry-level N100H is a USB-out only device, with 2TB of in-board storage. There is a 4TB version that also adds a COAX-output section and is called the N100C. Prices for the N100 series start at $2,500 USD and go up to $3,500 USD depending on configuration.

The mid-level ACS10 is more different from the N100 series, than it is just an upgrade. It was envisioned as a one-box-solution that would eliminate the need for an outside computer to be used in the system. It replaces a computer for duties such as CD-ripping, storage, tag-editing, and library management. The optical drive is sourced from TEAC, which is a CD-Rom data recovery drive that doesn’t play CDs, only extracts the data from them using Aurender’s proprietary ripping engine which incorporates Accuraterip (licenced) to make sure the ripping process yields bit-perfect files. Files are immediately available for playback during the ripping process. The ACS10 stores these files in an 8TB of in-board storage, with an available 12TB drive available in an upgraded configuration. Further, there is a companion storage-drive in each ASC10 iteration that is used for backing up store music files. Also included is an uninterrupted power supply which allows the ACS10 to properly shut-down in the event of a power-outage. This safe-shutdown feature alone allows the unit to securely power down without corruption to the storage drives or CPU installed.

A flag-ship model N10 builds on a lot of the features found in the ASC10, but has a litany of digital-output options. Bigger power supplies, more of everything to isolate power and circuitry. Everything is done inside to the best of Aurender’s ability.

When it comes to the analog side of things, again it is three models ascending the “good-better-best” hierarchy, but we’ll begin in the middle. As the entry-level model A100 is a derivative of the middle A10.

The A10 is one of Aurender’s most popular selling units, because it most essentially can replace a CD player as well as a preamplifier. Output is in both balanced and single-ended, volume control is available from either the Aurender app, the supplied remote control unit, or from the front-fascia mounted volume knob. The heart of the Aurender A10 is the DAC, which is based on AKM4490 chip-set, in dual-mono configuration with dual-mono linear power supply. The model we had to fawn-over in Long Beach included 4TB of in-board storage, with mirroring. More storage is available.

The less expensive A100 is a shrunken down version of the A10, with a smaller chassis, using the same AKM4490 DAC chipset in a stereo version with a single linear power supply, dropping the balanced outputs — leaving only single-ended. Storage is decreased to 2TB and the included remote is now a plastic body versus the machined aluminum unit included with the A10. The A100’s price starts at $3,955 USD.

The flag-ship analog out model A30 has the best build quality available from Aurender, and is built around the AKM4497 DAC chip-set. The entire topology is dual-mono, done as discreetly as possible. All of the features functional of the ASC10 are carried over to the A30, with the end-user required to supply their own back-up drives. The A30 is a superb lifestyle product and high-end unit, as it is easy to use and allows many boxes to be eliminated by one device. It’s the ideal digital centerpiece.

Pass Labs will be showing off their brand-new XA25 Power Amplifier at AXPONA this week, and announced today that the company has started shipping the Class-A amps which have an MSRP of $4,900 USD ($6,500 CAN). […]

The List: Five of the Best Power Amps in The World

Welcome to something new we’re going to try here on PTA thanks to our friend Wynn Wong of Wynn Audio in Richmond Hill, Ontario. I’m going to be curating a new list every month featuring different categories […]