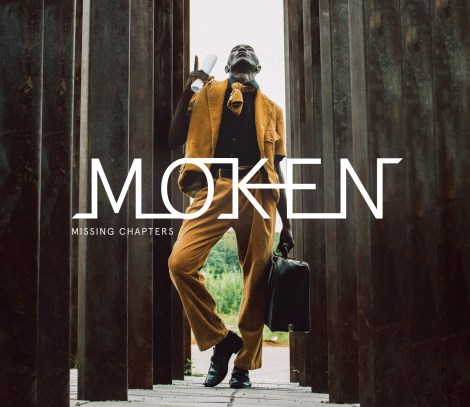 2019 is barely half over, and I’m already prepared to call Moken‘s Missing Chapters as the Best Album of the Year. You might think I’m being ironic, especially if you listen to the first few minutes of this incredibly crazy yet original album. Moken, who was born in Cameroon and now lives in Atlanta, possesses one of those incredibly quirky voices that will either turn you off immediately or redefine your expectations of a modern singer, much in the same way my horizons have been broadened by originals such as Diamanda Galas, Daniel Johnston, Elisabeth Fraser and, most of all, Scott Walker.

I’m reminded of one my oft-told music stories, the one where I played Pixies’ Doolittle for my first wife back in 1989 and she asked me “is this supposed to be serious?” I almost had the same reaction a few minutes into Missing Chapters, but it only took me one complete listen to go from “WTF” to “Album of the Year.”

How do I best describe Moken’s unusual vocal style on Missing Chapters? He’s described as having a multi-octave range, which is fair. When he goes low, he sounds like Geoffrey Holder–his voice is deep, distinctive and rich, but it has a whimsical quality that makes you think Moken’s using a funny voice to tell a funny story. When he goes high, his rapid and forced vibrato turns into a warble, and that’s when you start to ask yourself “is this supposed to be serious?” But here’s the thing–like an actuarial table, your chances of falling in love with this album increase as you move further into it. Make it to the end, and you’re ready for a second listen just to make sure you really just heard what you heard.

There’s a particular genius in the way the music offsets Moken’s distinctive voice. He recruits a talented rhythm section for Missing Chapters, upright bassist and close friend Bill Giwen and a rotation of drummers, to play a calm and measured brand of mid-tempo rock. If Moken had a more conventional singing style, this music would be nice, competent but ultimately just okay. If the instrumentation was as odd as Moken’s voice, the entire sound would spin wildly off into outer space. The balance here is key–these talented musicians heard Moken sing and said yes, count me in. We get it.

The final ingredient to this fascinating music is Moken’s musical contributions. He plays the acoustic guitar in sort of a clawhammer style, capturing the essence of the chords but not quite digging out the perfect notes. He also plays trumpet, again in an unsteady way that sounds like he just picked up the instrument and is still working out the kinks. My first reaction is that he’s not quite playing at what I would call a professional level, but that misses the point somewhat. Taken as a whole, Missing Chapters does maintain that beautiful balance of sound, of joy, or of hardship–it blends into a mysterious and satisfying whole if you don’t pick at the parts. The words coming out of his mouth sound crazy at times, as if he’s singing for kids, but on paper his lyrics are moving and eloquent. It all comes together if you just let it.

How will you respond to Missing Chapters? I implore you to sample it before diving in, but that might not be enough. Moken needs to ingratiate himself first, and that takes time. But we all have performers we love who might sound really strange to friends who are listening for the first time. If you’re open-minded about your musical tastes, however, Moken might be the most illuminating thing you’ve heard for quite some time. At least that’s how I feel.

There’s a huge pile of recordings of female vocalists on the coffee table in my listening room right now, and Beata Pater‘s Tet has been sitting there for months, unnoticed. That was a mistake since […]