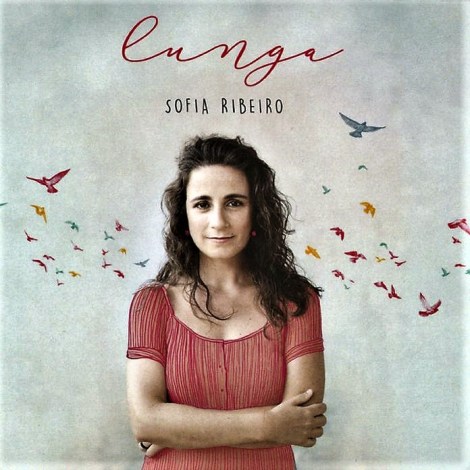 Portuguese singer Sofia Ribeiro has one of those pure, beautiful voices that makes you want to get to know her, maybe hang out for a bit and talk about music over some coffee or whatever they drink in Lisbon these days. It doesn’t matter that she sings mostly in Portuguese, a language that sounds inscrutable to me despite the fact that I speak Spanish, because there’s an upbeat quality to her songs on her new album Lunga, a sunny tone that implies she’s an optimist.

I find this intriguing because my last exposure to Portuguese music was fado, that traditional genre that’s marked by sailors spending an inordinate amount of time at sea, thousands of miles away from those whom they love. Those tears are nowhere to be found here, which shouldn’t suggest that Sofia Ribeiro doesn’t have a lot of depth or emotion to her compositions. Lunga is an album about making connections and enjoying life, despite frequent setbacks. On “My Floor Is a Rug,” she uses the comforts of home to reach out to the rest of the world: “The future may be in a utopian mansion, but for now there is only the present. Does the perfect ground exist?” The darkest she gets is on “The Afternoon,” when she sings that this misfortunes in her life try to trample her, and as “they crowd together and crush one and other? For that reason, they do not kill me.” See? That’s optimism.

One of the delights of Portuguese music, as I discovered with fado, is purity and simplicity in the service of beauty. Fado is focused on the voice with minimal accompaniment and maximum impact, while Sofia Ribeiro surrounds herself with exceptional musicians who bring a distinctive sound to her jazz, a mix between subtle Latin rhythms, tango and European pop structures. She’s backed up mostly by a trio made up of pianist Juan Andres Ospina, bassist Petros Klampanis and percussionist Marcelo Woloski, with occasional guests, and everyone understands that it’s Sofia’s light, friendly and loquacious singing that’s the star. She’s playful when she needs to be, speeding up the lyrics with the rhythms, but when it’s time to really shine, she lets loose and delivers that pure beauty.

As I mentioned, she does sing in English once in a while. I sense that her English is perfect or near-perfect–she wrote me a lovely email introducing herself and it was composed with skill. When I can suddenly understand her words, it has an intoxicating effect–she seems less exotic and far away. She becomes a good friend, someone who takes time out from speaking in a foreign tongue to explain things to you, just for you, perhaps over that cup of coffee. The voice doesn’t change or lose its fascination, it just reveals more to you. It’s like getting to know someone new, which is always a pleasurable experience.

Aviva Chernick’s new album La Sirena immediately reminds me of two recent albums I’ve reviewed–Sofia Ribeiro’s Lunga and Alex Cuba’s Sublime–and not just because of the language difference. Ribeiro is from Portugal and sings in […]