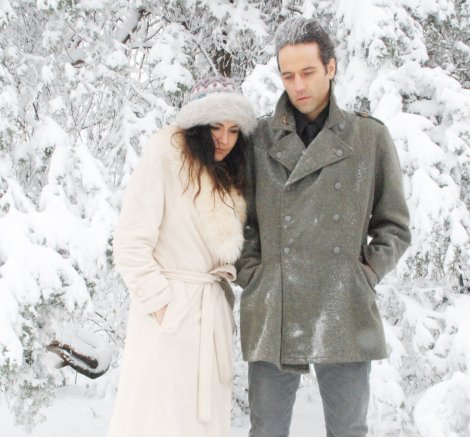 I’ve been a fan of The Smoking Flowers since I reviewed their album 2 Guns back in 2013. They have a story like no other–Scott and Kim Collins are a married couple who also happen to excel at creating both stunning harmonies and a unique, passionate brand of Americana through their supreme songwriting skills. What makes them different from most is the fact that Kim battled breast cancer successfully a few years ago, and their music reflects that–these heartfelt and powerful songs revolve around surviving through love and commitment. You can hear it in their lyrics, how they’ve been through hell and back and how they’ve had rough days and moments where everything almost fell apart. But they didn’t let it happen, and they wrote songs about it afterward.

Snowball Out of Hell, the Smoking Flowers’ new album, is an “all-acoustic companion” to Let’s Die Together, their last album. (I also reviewed that one here.) Snowball, in fact, is being released on June 21, one year to the day after Let’s Die Together. I wrote, “These are the songs you might hear at a club, one where you can get relatively close to the stage and know there’s simply no way this is going to be a disappointing night.” Since 2 Guns, Kim and Scott have successfully navigated the intersection between hard blues-rock and country, and on LDT they also managed to slow it down a bit with a number of delicate ballads. On Snowball Out of Hell, Scott and Kim remain in that softer place from beginning to end, even though the power of their journey is never diminished.

As I’ve mentioned before, the Smoking Flowers deliver sort of a one-two punch when you first listen to them. First you have Kim’s amazing voice, strong and dusted with experience–she’s always reminded me a little of Ann Wilson of Heart in the way can she belt out a song and still seem vulnerable underneath. The second, more subtle punch comes from Scott’s guitars, which are always compelling whether they’re electric or acoustic. Here you only have the latter since this is an acoustic album, but he has such a relaxed and comfortable movement along the frets. Oh, and I almost forgot that Scott is a hell of a singer, too–he has that rocker growl that reminds me of Gram Parsons. But, and here’s the point, the Collins blossom and fly away the minute they start singing together.

Snowball Out of Hell sounds like something you’d hear from the Smoking Flowers live–an endeavor I’ve yet to accomplish–since so much of it reflects just the two of them playing live. Guest musicians make sparse appearances, a drummer on one song, a piano here and there, and even a lone and lonely-sounding trombone on “One Friend.” But this album, as all Smoking Flowers albums, is about one thing–a wonderful love affair, the kind that reminds us why we listen to love songs in the first place.

How many of y’all love The Flying Burrito Brothers’ Gilded Palace of Sin or The Byrd’s Sweetheart of the Rodeo? How about Nashville Skyline? Despite the fact that I was alive during the great California […]

One of the things I’ve learned about music over the last couple of years is that there’s a difference between a hybrid genre, such as country-rock or Latin-funk, and playing one genre of music entirely […]

I knew that Cape Disappointment, the new LP from Aaron Semer, was in my review pile for at least a few weeks. I was surprised when I retrieved it from said pile only to find […]