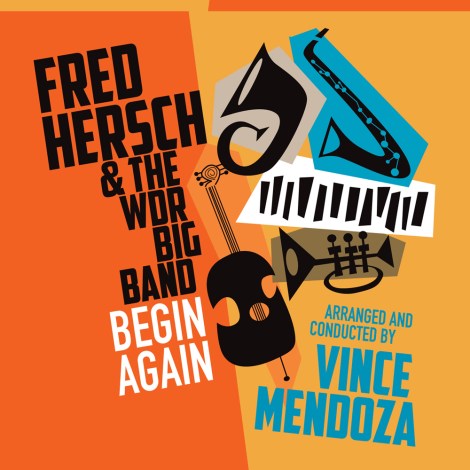 It says a lot about legendary jazz pianist Fred Hersch and his unique style that he can play with a large ensemble such as the WDR Big Band and leave you thinking primarily at those thoughtful phrases and unique cadences on the keyboard. WDR, based out of Germany, has a fine reputation for coming up with a sound that stands apart, so much so that I instantly know that these performances will not sound typical, all dynamics and precision and scope. Fred Hersch and WDR seem perfectly suited for each other, in other words, and Begin Again‘s only ambition is to reap the benefits of this partnership.

Begin Again, which was arranged and conducted by Vince Mendoza, covers nine original Fred Hersch compositions that span his long and incredible career. If you don’t know about Hersch, he is one of those pianists who has become iconic for his life as well as his playing. He started off as a bit of an audiophile’s darling with a series of releases by Chesky Records through the ’90s. He’s been sidetracked a couple of times in his career, first when he became HIV-positive and more recently, in 2008, when he succumbed to a coma for two months. This, of course, resulted in his masterwork, My Coma Dreams, in 2011.

I’ve been a Fred Hersch fan from the beginning, buying those Chesky CDs because Stereophile told me to, but I’ve reviewed his albums as recently as last year when I tackled his trio’s Live in Europe. I was even treated to his very recent appearance on Judy Wexler’s Crowded Heart, which I reviewed right here. I enjoy his work for a very simple reason–he plays like no one else. That doesn’t mean he’s weird of quirky or makes strange noises while he’s playing. It’s all in the notes that he chooses, the ones that aren’t the easiest to capture. He has a lyrical quality, but he can also head down a dark, mysterious road and challenge you to follow. He’s never boring, which is why he makes this one of the most compelling big band recordings I’ve heard in a while.

Okay, I admit it. Sometimes I get so flooded with big band recordings that it becomes a chore to dig out the worthwhile bits, the details that go beyond the merely big. The WDR Big Band has always been adept at this. I mentioned the words dynamic and precision earlier, as sort of a less-than-ideal quality for big band jazz, but that’s where WDR shines. They execute flawlessly but at the same time they take risks, ones that always pay off. On Begin Again, that risk is knowing when to quiet down and let Fred Hersch play with minimal accompaniment. There are plenty of stretches where it’s just Fred, performing his magic, but the WDR always knows when to come in and offer a little reinforcement, an expanding of the sonic horizon. I wish more big band jazz recordings were this fascinating and original.

Pianist Fred Hersch (website) released his new album Songs From Home in celebration of his 65th birthday, and that makes me feel old. When I first discovered Hersch in the ’90s, he was one of […]

Felipe Salles and his new project The New Immigrant Experience isn’t the first time we’ve had a large scale jazz recording that documented the experiences of DACA “Dreamers.” Back in 2018 I reviewed the […]