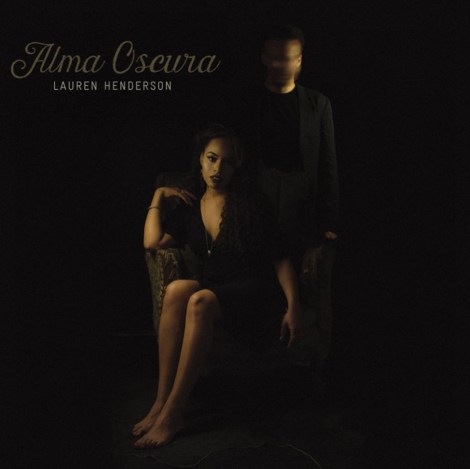 Lauren Henderson‘s new album, Alma Oscura, is destined to become one of those sexy, romantic things you play when you’re, well…let’s just say “in the mood for love.” It’s smooth and it’s sultry (a word I’m really beginning to like and overuse) and if you listen to it by yourself it might just seem a little weird. So take heed, audiophiles. And I do target audiophiles because this album sounds great. Really great. You want in-front-of-the-fireplace-on-the-bearskin-rug warmth. It’s a total package.

I first heard Lauren Henderson just last November, when I reviewed her six-song EP Riptide. I wrote “Henderson’s low growl is like an embrace–it settles you down and yet keeps you engaged and ready for what’s next.” I liked that album a lot, especially that low growl of a voice, but I might have been a little reluctant about the pop elements. On Alma Oscura, Henderson focuses on her Caribbean heritage–her parents were from Panama and Montserrat–with a much greater commitment to sing mostly in Spanish. That adds to the purist approach here, of making something smooth and romantic and swimming in beauty.

Alma Oscura is Lauren Henderson’s sixth album, and it possesses a lot of confidence–the kind that comes when you’ve made a decisive final step toward being who you are and loving what what you are doing. She surrounds herself with plenty of musicians who play calmly and with focus–at times it’s as intimate as Dean Martin’s trio on Dream with Dean. That gives these songs plenty of freedom to be themselves, to be something varied and different and still stay true to Henderson’s mesmerizing vocals.

That means you might hear a string section in addition to a jazz piano trio, or a harp, or a mellow horn section. The most impressive tangent is created in Tessa Lark‘s violin in “Where Are You Now,” which is possibly the best single song I’ve heard this year. That violin stretches out into a fiddle and everything brushes up against bluegrass in a very interesting manner.  Finally, there’s that sound quality issue, that this album sounds so gorgeous and it really whisks you away. It’s even better when bring someone along.

Mention the name Pat Battstone to me and I’ll brace for something wild and unexpected, a free-spirited exploration in pure sound and what it means to fixate on a single note and think about it. […]

The Sumiko Celebration 40 moving-coil phono cartridge entered the stable during a very busy time for analog at my place. I’ve plenty of phono preamps and step-up transformers and cartridges in for review, and we’re […]

Kathleen Grace with Larry Goldings, Tie Me To You | The Vinyl Anachronist

I often tease audiophiles about their obsession with recordings of the female voice, especially when that’s all they want to hear. It’s not that I don’t enjoy female singers, it just seems provincial and dull […]