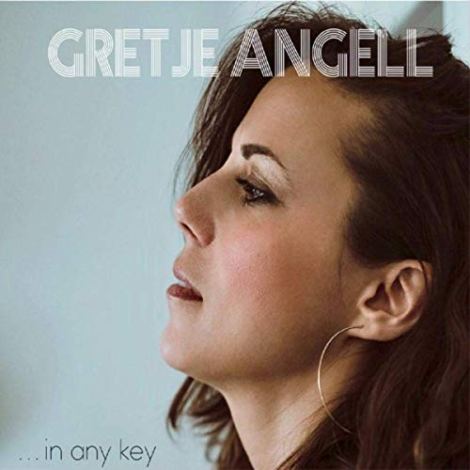 Gretje Angell’s new album, In Any Key, makes it two days in a row of fabulous woman singers–including, of course, Lauren Henderson’s warm and beautiful Alma Oscura. Both women have that seductive quality in their delivery, Henderson more classically so, but Angell is doing something a little more sunny and carefree, a little more mid-60s, a little more “Isle of Capri romp” and a little less “come join me in front of the fire.” In other words, In Any Key is the epitome of a breezy sound that seems to travel great distances to finally arrive at your ears. It puts me in a time and place that was so long ago that I can barely remember, yet I knew it was a good place to be even back then.

It’s an interesting name, Gretje Angell, but this jazz singer comes from Akron, Ohio. You almost hear it, the Midwestern austerity, in the Hammond B-3’s growl on the classic  “Fever,” and you can find it in the spaces in between Dori Amarillo‘s intricate but understated guitar fills. (Amarillo is also the album’s producer.) It’s Angell’s voice on these standards that’s out front, however, and it’s amazing how her voice reminds me of being a little kid in the ’60s and hearing all that music, all that different music from all angles, and bright and happy it all sounded. Genre? What’s that?

Gretje Angell and that carefree voice reflects a lifetime of her listening to jazz–her father and grandfather were both drummers. She studied classical music when she was young and eventually focused on jazz when she moved to LA. That might explain her real focus, which is adding just enough Latin jazz to her sound to make you wonder if Akron and Rio are neighboring towns. Even her cover of “Do Nothing Till You Hear from Me,” a song where its most famous performance can’t be forgotten, is thoughtful and on the money and also reveals some of those classical roots.

I feel almost reluctant to mention her name again, and here’s the reason. Before I learned she was born and raised in Ohio, I thought I could hear just a tiny accent in the way she sang, the kind of accent from the kind of European country where everyone has been speaking English as a second language since they were kids, so it might not be there at all. That’s how strong the Gretje Angell voice is, the calmness and sophisticated phrasing that hints at “let’s go the casino tonight–maybe one of the Grimaldi grandkids will be hanging out.”

She, along with Lauren Henderson, are elegant jazz singers, different in superficial ways but connected deep down. This was a beautiful double feature.

It seems like the last few jazz guitar albums I’ve heard are somber affairs, with delicate and thoughtful notes plucked within the context of oceans of space. Shawn Purcell doesn’t fit that description–on his new […]

Event Horizon, the eponymous debut album from the Chicago-based quartet, arrived under strange circumstances. I had just read an article on the 1993 space-horror film of the same name, and how it has achieved cult […]

Inside the debut album from J. Graves, I found a postcard. “Marc,” it said, “as shown on the cover, this record is my heart and everything inside of me. Thank you for listening–I’m just getting […]