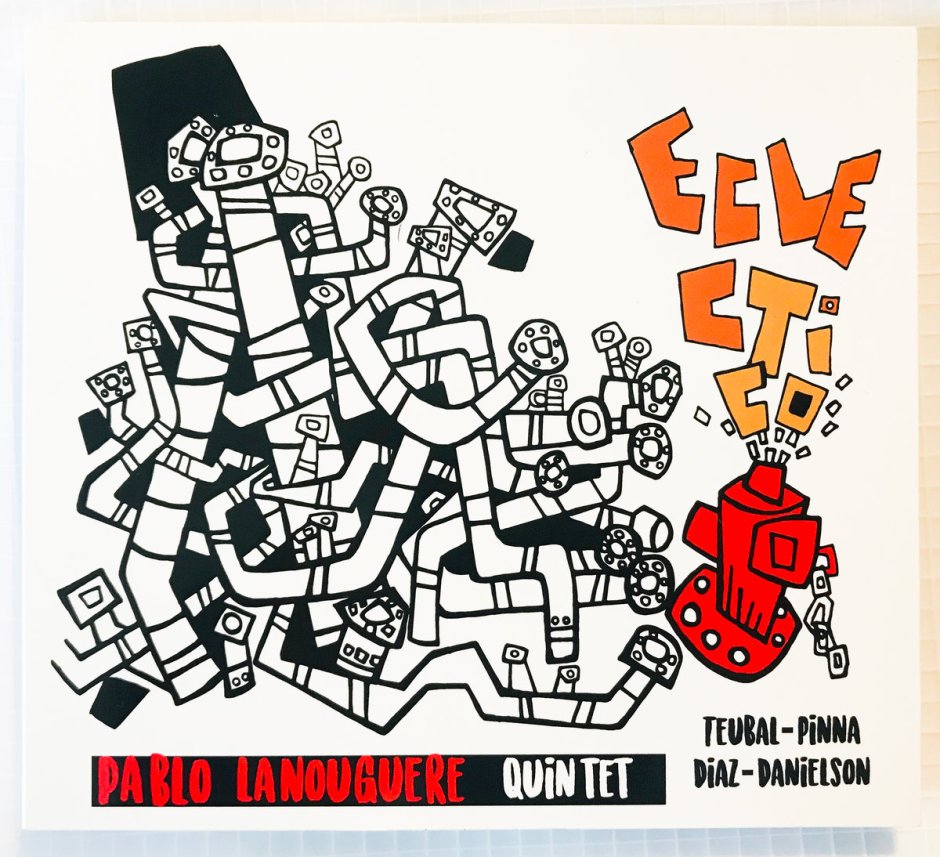 I’ve been talking about the Great Tango Revival of 2019, and the Pablo Lanouguere Quintet and their new album Eclectico is certainly part of that. But here’s the thing. The Tango Revival seems to be marked by constant innovation, a need to expand this genre both stylistically and geographically–something that’s not found as much as in, say, the Big Band Jazz Revival that’s been going on for the last few years. Eclectico lives and breathes by this creed, that you just can’t play the hits (so to speak). Most of these tango albums I have on deck are brilliant exercises in building upon traditions, but Argentine bassist/composer Pablo Lanouguere has an entirely different approach, one that makes this album stand out from the rest of the tango crowd.

These are original compositions, conjured by a man who wants to take familiar jazz tropes and watch them transform and evolve in the context his own life experiences. His fellow musicians–violinist Nick Danielson, guitarist Federico Diaz, pianist Emilio Teubal and drummer Franco Pinna–are just as well-versed in other sounds from far-off lands. Danielson’s expressive violin, for example, can inject folk touchstones from Eastern Europe and even the Mideast, and once in a while I thought I heard an Appalachian flourish that might have paid a momentary tribute to Aaron Copland. The entire time, though, the sound of the tango glides across the room, led by Pablo Lanouguere and his rhythmic bass.

Eclectico is a supremely musical album, one where melodies are rich and well-grounded. Pablo Lanouguere and his quintet are comfortable in a variety of genres such as salsa, funk, fusion and even the occasional ballad, but they always place the tango and its sensibilities at the front edge of the stage. That’s the whole idea in a nutshell–we’re a tango ensemble who can play anything. You name it, and we’ll accomplish it with feeling. Since these are original Pablo Lanouguere compositions, however, the quintet isn’t playing requests. They’re granting wishes.

Perhaps that’s why the Pablo Lanouguere Quintet is so unique. You can listen to each of these tunes, the way a familiar sound from the past is introduced and explored and then someone taps you on the shoulder and says hey, this is all tango ya know. Then there’s this shift in your head, your feet touch the ground once again…and then you forget. It’s all just music without borders, energetic and full of beauty.

Bill O’Connell, Wind Off the Hudson | The Vinyl Anachronist

Bill O’Connell released his latest album, Wind Off the Hudson, a few months ago, back then it was a bit more topical. This is a summer album, the kind of jazz you listen to while […]

When I last heard the music of Puerto Rican composer and saxophone player Miguel Zenon, he and his horn were backed by a string quartet in an interesting and somewhat avant-garde piece called Yo Soy […]