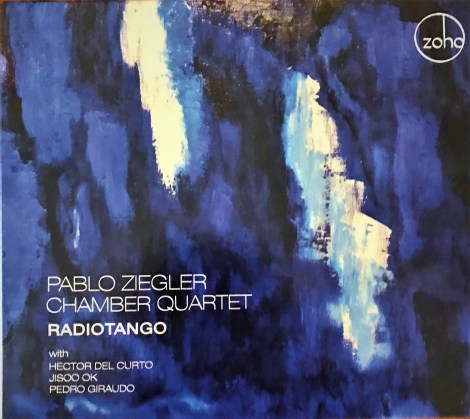 Just a couple of days ago I talked about the some of the current tango trends, and how everyone is using this Argentine musical genre as a foundation for something new. Now, the Pablo Ziegler Chamber Quartet turns in this modest little masterpiece, Radiotango, a purist performance in every sense. Picture a tango in your mind, a couple gliding along the dance floor, and then pay attention to the music that’s playing. That’s this music, just four masters of the tango playing it how it’s supposed to be played–just like you’d imagine, and in front of a live audience.

Pianist Pablo Ziegler, bandoneon player Hector del Curto, cellist Jisoo Ok and bassist Pedro Giraudo are all known for their love for and devotion to nuevo tango, which refers to Astor Piazzolla’s compositions and how they blended traditional tango, classical and jazz starting around the late ’50s. That makes me wonder if these new innovations I’m noticing are part of a nuevo nuevo tango, or just an extension of the original movement.

To my ears, a pair that’s been getting a crash course in tango in the last few months, this is close to Piazzolla’s original spirit as it gets. In fact, it sounds more retro than nuevo. (Heck, I’m just now realizing I really enjoy this music even though I bought my first Piazzolla album back in the early ’80s.) Tangents are created off the traditions, especially when Pablo Ziegler takes off on a long-armed, sweeping solo that becomes untethered to those familiar rhythms, but that lusty spirit is never far away and drops in at unexpected moments.

The title Radiotango comes from a Buenos Aires radio station program, “FM Tango,” that used to play in the late eighties. Each of these songs does refer back to Argentina, Buenos Aires, tango and other traditions, everything from a lone Astor Piazzolla cover (“Fuga y Misterio”) to a song from the Argentinian remake of The French Connection. Pablo Ziegler composed and arranged these tunes to reflect these points and intersections in his life, but his quartet also know how to build a universal feel to these tunes, ones that make an instant impression.

It seems like the last few jazz guitar albums I’ve heard are somber affairs, with delicate and thoughtful notes plucked within the context of oceans of space. Shawn Purcell doesn’t fit that description–on his new […]

I barely made it through another year of holiday jazz releases, and I have to admit I skated a little because I only talked about one release from Jeff Hamilton as if that’s the only […]