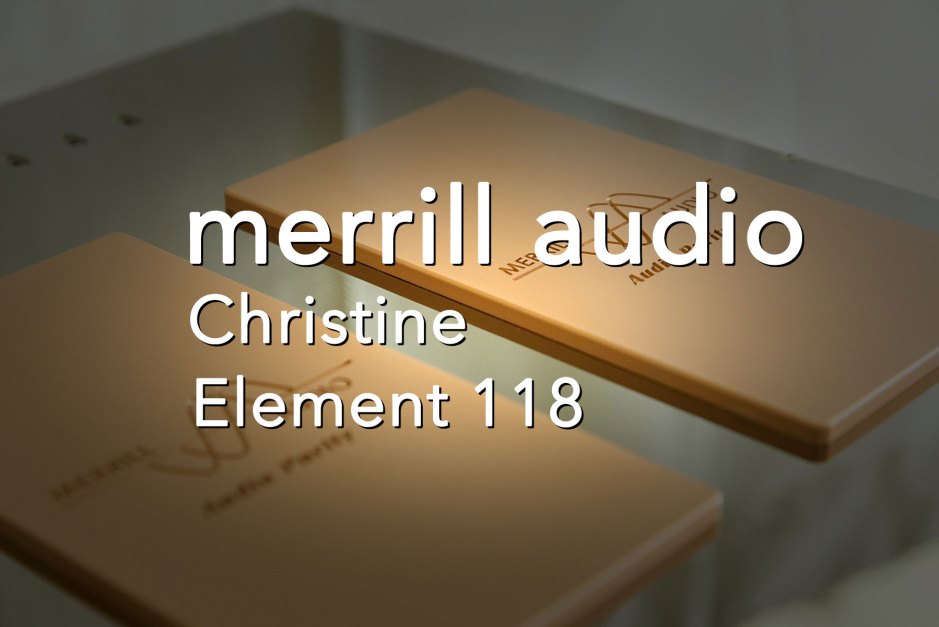 Back of the Class?

Ever since their introduction in 1958, Class D amplifiers have been loved by many for their efficiency versus traditional Class A, AB or B circuitries. Theoretically, Class D circuits are capable of achieving 90-98% efficiency, whereas Class B operates at approximately 75% and Class A at 20-50%. This difference gives Class D significant advantages as these amps generate less heat, and require much less space. For these reasons, Class D amps are routinely found in the professional arena such as concerts, stadiums or PA systems. They are also commonly found in active speakers or subwoofers.

Words and Photos by Richard Mak

Yet, Class D amplifiers have always been plauged with controversies amongst audiophiles, at least in their early days. Despite their efficiency, there are several limiting factors which can hamper Class D performance. Class D amps require the use of MOSFETs that rapidly switch back and forth between the power supplies to produce output pulses. However, MOSFETs have relatively large capacitance hence they need to charge and discharge; this can delay the switching process, causing distortions. As a remedy, some have resorted to using high doses of “negative feedback”, others have resorted to “bridging amplifiers”, but each will bring another set of challenges into the equation, namely loss of detail and possibly adding “graininess” to the sound.

Personally, I belong to the camp of individuals who remain rather skeptical of Class D Amplifiers. I vividly remember my demo of the NuForce Ref 9 Class D amplifier in 2006, back when my system was powered by a pair of McIntosh Labs 2012s. At half the size of a normal shoebox, the NuForce pumps out a whopping 300W at 4 ohms, with a damping factor of over 4000 at any load. It was small and efficient, but the problem was the sound, which was the complete opposite of the MC2102 tube amps. They had tremendous control of the woofers on the Dynaudio Temptations, but the music was analytical and grainy, the sonic image was like a television with the “sharpness” turned to the maximum. My subsequent encounters with the Jeff Rowland 501 Class D Monoblocks or the Audio Research DS450 were much better. While they no longer carry the “edgy” and “analytical” traits of earlier Class D designs, their sonic characteristics remain somewhat unnatural to my ears. I do not hate the sound, but I could not live with them either. 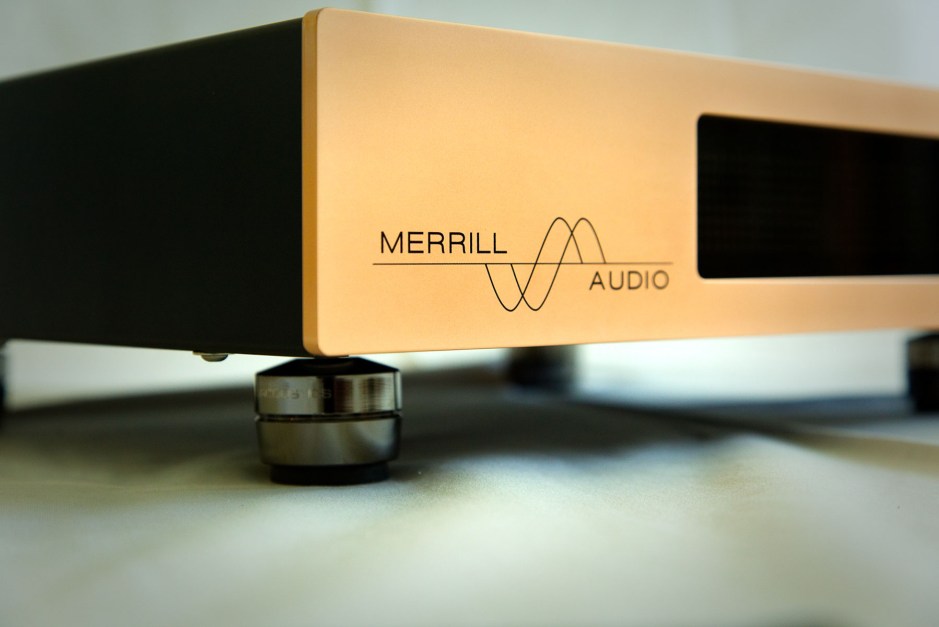 In 2018, I received a phone call from Merill Wettasinghe, CEO of Merrill Audio, that he was interested in having Part-Time Audiophile review the Merrill Audio Christine and the Element 118 combo. I explained that “analog” is my area of focus and that I may not be the best candidate for amplifier reviews. I have a large system which centers around the Peak Consult Dragon Legend speakers in a room-sized 18.5 x 29.5”, which calls for fairly large amplifiers, usually in excess of 1000Ws before I am happy. However, we kept the conversation going and in March of 2019, I decided to try out Merrill Element 118 amps.

Wettasinghe comes from an electrical engineering background, with various tenures in semiconductor testing, software development, analog, and digital designs. Later in his career, he took on more sales and management roles in wireless communication. In 2012, “in a moment of madness” (in his own words), Wettassinghe decided to start Merrill Audio from the ground up, that is to say, he is the owner, designer, and CEO of the company.

The design philosophy of Merrill Audio is to achieve sonic accuracy true to the recording, while actively engaging the listener – quite a common order as nearly all manufacturer aims to achieve these two goals. Wettassanghe adds that

Live instruments require a very dynamic range, say the piano, for instance, is very difficult to reproduce accurately with the full dynamics and clarity without crushing all the sound into a jumble of noise. The recording engineer and mastering engineer might change some of this however what is on the musical track need to be reproduced faithfully. Direct to Disk, high-quality tapes and high resolution digital recorded music are some of the best challenges. The lower the distortion, the better the reproduction. The greater the immediacy, the more liveliness the sound. The lower the noise, the greater the dynamic range. All of these are design goals of Merrill Audio.

What separates the Merrill Audio Element 118 amplifier from other Class D designs, according to Wettasinghe, is the bleeding edge circuitry which it employs. Most MOSFETs carry a rather high inductance and capacitance, these new amps use the latest Gallium Nitride transistors which keep inductance and capacitance as close to zero as possible, while eliminating the use of negative feedback. This has led to a very high level of output while achieving extremely low levels of distortion. The 118 Monoblocks are spec’d at 400watts into 8 ohms, and 800W into 4ohms, and 1600W into 2 ohms, measured at 1kHz at 0.005% distortion. Westtassanghe further emphasizes that real distortion happens when you have complex pieces of music or a square wave; these are extremely hard to measure, but very noticeable to the ear. The Merrill 118 has an “Active Distortion” of approximately 0.05%, an extremely low number even at maximum output.

The Merrill Audio Christine and Element 118 arrived in 4 separate boxes, which are well thought out and bombproof. Westtassanghe even made a video on how to unpack the amplifier:

The Merrill Audio Element 118 Monoblocks sport a simple and elegant design, with rose gold front faceplate which is nearly 5mm thick, made of machined and anodized aluminum. The body has a “pewter” finish, also made of thick aluminum, with a dark but shiny finish. The Merrill Audio Christine preamp has a thick front panel, but the body has a powder-coated sheet metal finish. The display letters on the preamp have the largest font size I have ever seen; even from 20 ft away, I could easily identify the volume level, the font size easily topping 150-160. The preamp employs a remote which is identical to the Apple TV. The menu structure is a bit difficult to navigate, but it was made easy by the very detailed owner’s manual.

The Merrill Audio monoblocks and preamp came to me from another reviewer who has had many hours on them which meant these test samples required no break-in. Yet the Power amps have no ON/OFF switches so they remained powered on through our review. The sound did change after the initial 3-4 hours so leaving them on must have some effect on the sound.

The sound of the Merrill Audio Element 118 almost fully eliminated my long bias against Class D amplifier. Not only did they not carry any hint of “grainy” or “analytical” characteristics, but they also ventured into the sonic spectrum of my resident McIntosh MC2KW amplifier which is more relaxed and musical in nature. A strong characteristic which stands out is the apparent “roundedness” of the presentation, that is to say, the edge of the instruments and voices in the acoustic space is smoothed and rounded out. This is quite noticeable string instruments or modern high definition recording. The transient response is fast, but not rushed. The musical pace of the sound is just about adequate, at no time did it feel rushed, or artificially slowed.

I particularly enjoy jazz music on the Merrill gear; they have an immediacy and forwardness to the sound which made the jazz band upfront and up close. The biggest surprise to me is the slightly warmer than neutral tonality, which was not my experience with other Class D amps.

At approximately 700Watts into 5 ohms, however, the Merrill Audio amplifiers did struggle on recordings with explosive dynamics such as Mussorgsky’s “Pictures at an Exhibition”, with James Levine conducting the MET Orchestra (DGG 437 531-2), or the famous Proprius recording Cantate Dominos. The lower octaves are no match against the 2000W McIntosh Mc2KWs, bass drums and low organ pipes did not go as low, as if the speaker’s low-frequency roll-off happened sooner. The chorus became garbled up at high volume (Over 90dB), which is a tell-tale sign of insufficient power. 700Watts is plenty for the majority of the systems out there and likely more than enough, but with 4x 12” drivers on the Peak Consult Dragon Legends with a power demand to push the sound to over 90 dB, they are not quite doing each other justice. 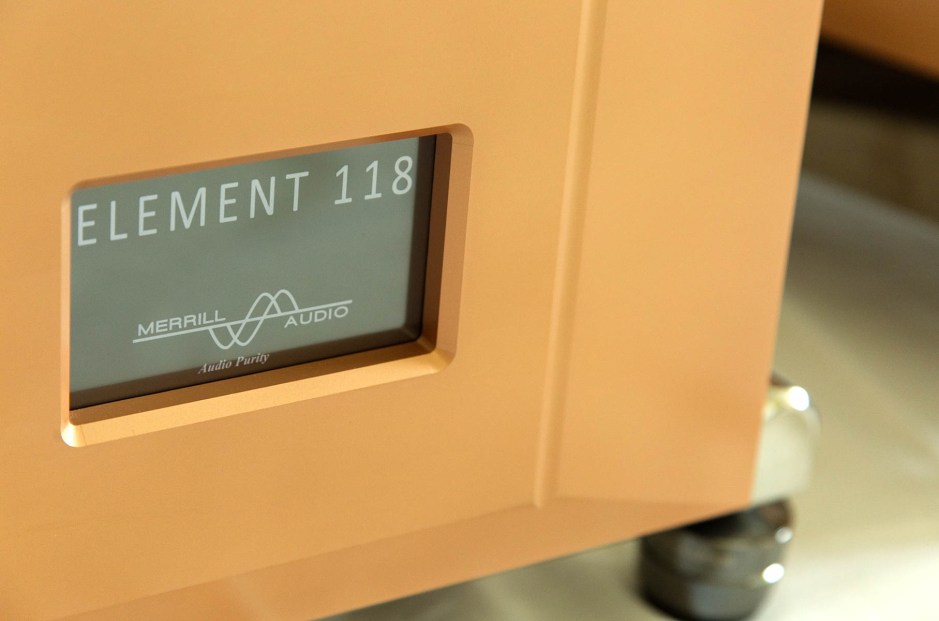 The Merrill Element 118 monoblock amplifiers and the Merrill Audio Christine preamplifier are priced at $36,000 and $12,400 respectively. In all my years of writing, I have never indulged readers in value justification. Some audiophiles believe it is a sacrilege for an audio system to cost over $5,000; meanwhile their spouses carry $20,000 dollar Hermès handbags. $45,000 can be chump change for a billionaire; $45,000 is an entire year’s salary for a teacher. If you are in the market for a set of Class D amps, the Merrill Audio Christine and Element 118 are serious contenders in that arena and deserve your utmost attention. It is a star amongst all the Class D combos I have heard.

Once upon a time, I was young and innocent, brash and bold. I believed in the superiority of digital playback. Cables could have no impact on the sound quality of my system. You could never […]

Audiophileo 1 with Pure Power: The Little Combo That Could

— by John Grandberg Just how important is the transport in a quality audio system? It’s a deceptively difficult question. Notice I’m asking specifically about transport rather than DAC. If you browse various audio forums […]

Triode Wire Labs, run by the eponymous “Triode Pete” (aka Pete Grzybowski) was a company recommended to me very highly by my fellow PTA staff members. That included both Scot Hull and Marc Phillips, who […]