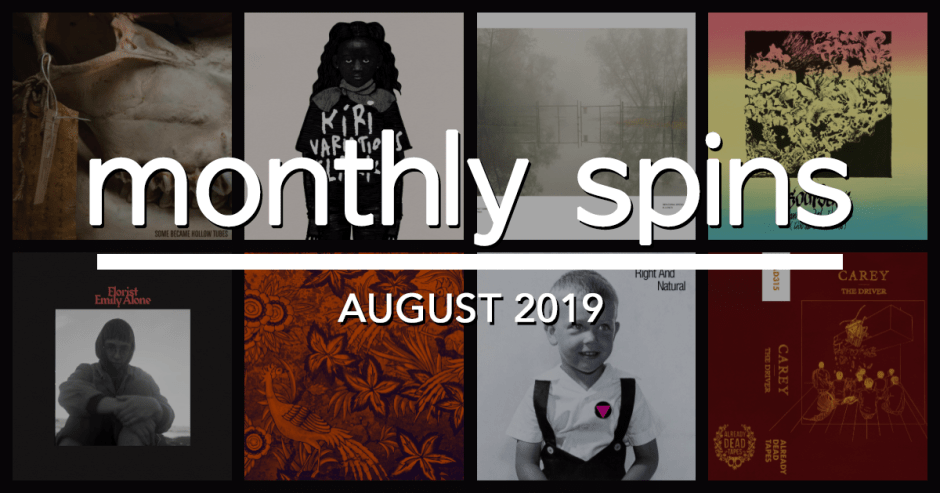 It’s nearly over folks and September is here. Escape velocity and interstellar ruminations are what I’m listening for. Get me outta here music!

Some Became Hollow Tubes: Keep It in the Ground

Here are two stalwarts of rock’s sprawling regions of psyche and dark drone with Aidan Girt ( Godspeed You! Black Emperor) and Eric Quach (Thisquietarmy). Percussion is front a center to this writhing whirlpool of of loops, pedal pushing. It is a journey, like so many on the list this month, through vast rock atmospherics. Not noise and not a cacophony but a series of meditations that invite you in.

Florist was once a band but singer songwriter Emily Sprague had a bad breakup. Her mother died suddenly and unexpectedly, leaving a void in her life. Because she was living on the west coast she decided to record the next Florist album by herself and the result is this introspective and exploratory album without the slightest hint of folk bromides and excessive posturing. It is more like a train journey through Sprague’s mine which is a supple and rewarding record I’ve played many times this month.

Two world class improvising woman combine talents on this come hither, come thou meeting of the minds. Agathe Max has often performed as a solo artist with a lot of foot pedals and effects. Here she works Natalia Beylis, who plays a variety of instruments including mandola, piano as well as the exotic cumbu, which is an oud-like Modern Turkish instrument. Instrumental incantations and spectral haunts make this album, named after a book oof illustrations drawn by Irish artist Harry Clarke for Hans Christian Anderson’s The Garden of Paradise a welcome listen.

File Under: electronic and acoustic genius

Clark has always been cutting edge and leads the Warp Records crew with always creative innovations and new pathways and textures. Absent are the pulsing kicks, the distortions and daunting bass lines. In its stead is a recording that is straightforward and that exists within that pastoral English landscape that is decidedly weird. It’s simply a stunning record with small, short peaks into Clark’s ever growing oeuvre. Yet another tasty addition to this month’s list and one that might very well make it onto the Best of 2019 list.

Bill Laswell with Dark Matter Halo: Caravan to the Stars

Back with the usual high level of intent and experimentation.

File Under: ANB (ambient not boring)

K. Leimer is a Seattle ambient musician who has been at this since the late 70’s when he was turned on to ambient by Eno. ANB is a high honor in my book. To do it well there must be ample spatial arrangements and at least the ghosts of real instruments, real time structures and a plentitude of empathy, even sacrifice for the sense of the greater good. Kerry says of this recording that he “does not profess that music- especially an experimental, lyric free music—can change or influence such circumstances we are living through. But this in the context in which we now live, and this has shaped the music of Irrational Overcast—a coping mechanism for living under clouds of baseless beliefs and simplistic ideologies that disfigure and stifle what is an admittedly difficult, though really quite lovely world.”

The Frogs: It’s Only Right and Natural (reissue)

File Under: freak folk, rock with a heavy dose of glam-punk

This is my first introduction to a band lauded by Kurt Cobain, Eddie Vedder and Smashing Pumpkins Billy Corgan. To say that they are an acquired taste is a cliche I will use to get the ball rolling. Think Butthole Surfers, add in some now unthinkable black face with pink wigs and every possible thing that you can no longer say or do and you have The Frogs circa 80’s and 90s. The Frogs formed in 1980 by two brothers from Milwaukee, Wisconsin, with guitarist Jimmy Flemion and percussionist Dennis Flemion being the only members of the group that remain steady throughout the years. Low budget stage spectacle and pseudo-glam stylings. One brother always wore a giant pair of bat wings and glam boots. They performed frequently in coffee houses and clubs but didn’t get their big recording break until a tape of their mostly improvised show got into the hands of Homestead records Gerard Cosloy. He assembled 14 songs from the tape into 1989’s It’s Only Right and Natural, which is an important indie rock record you should hear at least once. Beck sampled on Odelay. They have toured with and opened for Smashing Pumpkins, and Pearl Jam, and when he was alive Kurt Cobain sited them as an important influence. They have dozens of recordings and perhaps hundreds of songs. In 2005 while swimming brother Dennis Flemion drowned at 57 effectively ending their long career.

It’s generally one Frenchman Ernest Bergez doing violin and effects. When he plays live and outside, like he does here, is when the magic really happens. In the gloriously magnificent Mantras (Bc) he played next to a concave French mountainside where giant, indigenous horns are set. Here he is also playing in the mountains and it is sublime and can’t help but mute the noise.

How could you go wrong with this mix of English experimental monsters. You can tell that Grumbling Fur kept the others grounded in pop structures, since given the off-the-leash density and layered quality of this album. Although it contains multitudes and remains as challenging as any of these musicians named projects, it still manages to hug the earth, letting a lightness into the fabric of ambient gravity.

Such a lovely well thought out record. The artist Carey is sort of an enigma. He or she has little to no biographical information but please don’t let that stop you from giving this a spin. At times
there are elements of jazz but there is none of the usual showing off. Quieter moments of Mahavishnu Orchestra come to mind.

2019 went by really fast, a blur of truth/reality and fake/reality. One might be tempted to say that 1984 is finally upon us and all the early post-modern philosophers got it right. The “simulacrum” was […]

Dave and Carol Clark of Positive Feedback. Dave and Carol give us all the details on creating a print magazine, shifting to an online publication and learning how to really enjoy audio shows. Co host […]