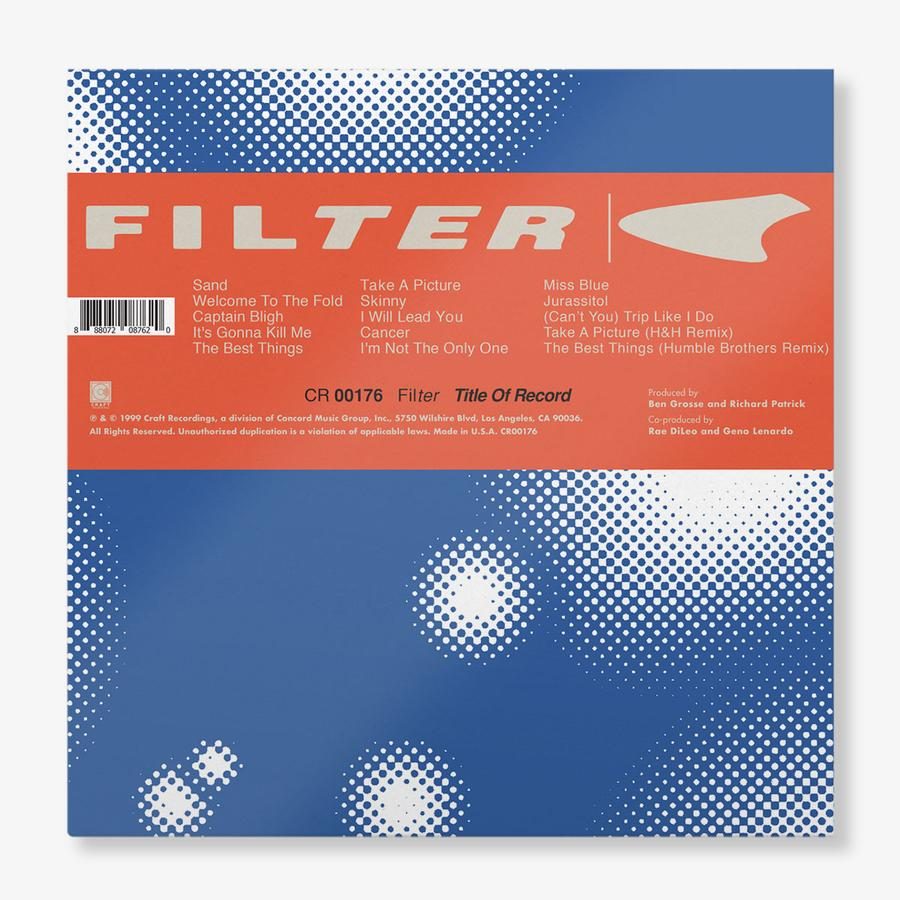 Craft Recordings, the company that just released It’s the Great Pumpkin, Charlie Brown! for the first time on vinyl, has also sent me the 20th anniversary reissue of Filter’s second album, 1999’s Title of Record. Listen to these two reissues back to back and you’ll start to understand just how ambitious and eclectic Craft Recordings is. For those of you who don’t already know and enjoy the music of Filter, the story kinda goes like this…front man Richard Patrick was the touring guitarist for Nine Inch Nails, and he decided to start his own project after Trent Reznor informed him that he would be spending a lot of time in the studio working on his next album, The Downward Spiral. Filter was formed in 1993, and in 1995 they released their first album, Short Bus, which I actually bought because I liked the single “Hey Man Nice Shot.”

Not only is “Hey Man Nice Shot” one of those catchy, head-banging industrial-metal tunes that’s hard to forget, it’s also famous/infamous for really being about R. Budd Dwyer, the Pennsylvania state treasurer who committed suicide on live TV after he had been convicted of bribery in 1987. That gives the song a creepy, gallows humor feel. Nothing else on Short Bus is nearly as interesting, in my humble opinion, but I felt at the time that the band was far more accessible and likable than NIN. In 1999, Filter released their second album, Title of Record, and I remember tuning out because the first single, “Take a Picture,” was far less dark and sinister. It sounded like a pop sell-out to me, and I moved on.

Twenty years later, we have this new reissue of Title of Record, and once again it’s time for me to re-evaluate my original opinion. This 2-LP reissue is the first time Title of Record has been available on vinyl, and it includes four bonus tracks–“(Can’t You) Trip Like I Do,” which was featured on the soundtrack for the film Spawn; “Jurrasitol,” from the soundtrack of The Crow; and remixes of both “Take a Picture” and “The Best Things.” You also get detailed liner notes from Bryan Reesman for the 20th anniversary release–everything you ever wanted to know about Filter is seemingly documented here.

Is it worth $30 to buy Title of Record just to have it on vinyl, and to have those four additional tracks? In a word, definitely. I don’t have my old CD copy on hand for comparisons, but I’ll say this: Title of Record sounds much better than I remember. Like other Craft Recordings LPs, this is a very quiet pressing, with little to no surface noise. The tracks also sound exceptionally clean and dynamic. This is an album that adheres to the old adage that you need to PLAY IT LOUD. Well, I’ll let you in on a secret–this was the first Vinyl Anachronist music review where I listened with the Von Schweikert Audio ESE speakers mated to the huge McIntosh MC2152 power amplifier–150wpc of pure tube bliss, and my system plays louder and cleaner than any other system I’ve had in my home.

Between Title of Record and Fear Inoculous, my Halloween is set.

I started off 2020 expecting a break from the multitude of Latin jazz releases–specifically tango and Brazilian jazz–that dominated the music scene in 2019. I love this music, but after a while it all starts […]

This week’s international jazz surprise comes, once again, from Russia. My Story from Ilugdin Trio isn’t as esoteric as some of these other albums I’ve been reviewing–even from fellow Russians such as LRK Trio. Instead, […]