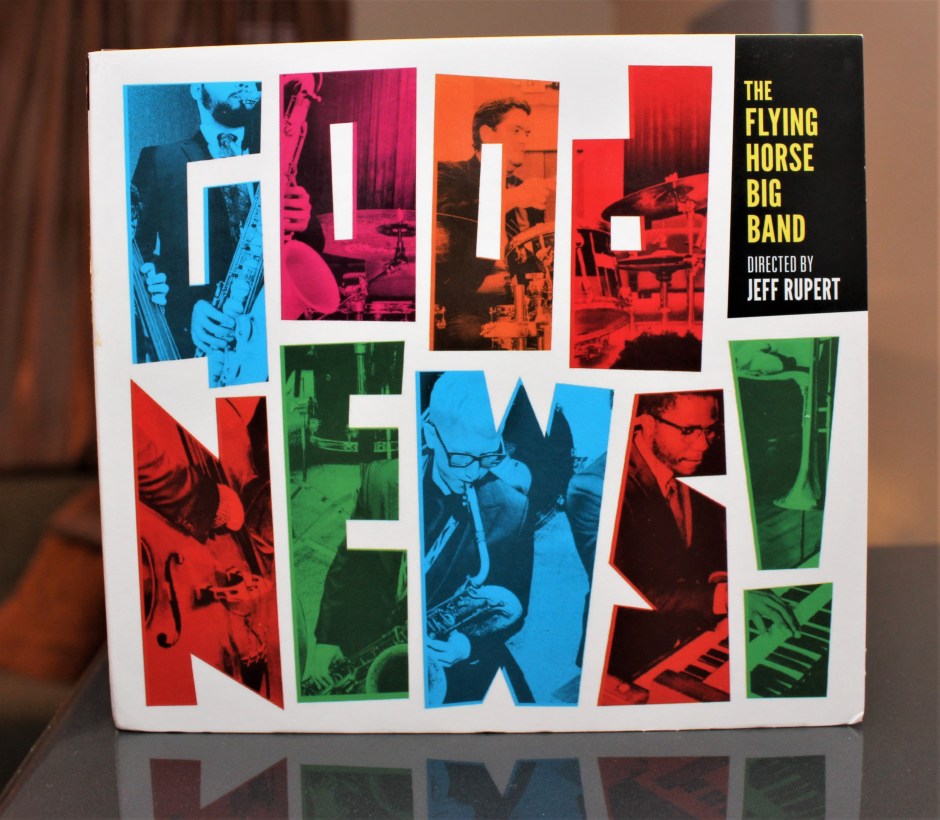 Talk about extremes–yesterday it was Filter, and today it’s the Flying Horse Big Band. I was just thinking that the big band jazz releases have been slowing down lately, but if you can say one thing about the Flying Horse Big Band, it’s that they are prolific. In the last couple of years I’ve covered a few of their releases including 2018’s The Bat Swings! and 2017’s Big Man on Campus. This particular big band jazz ensemble is another juggernaut from a highly regarded university jazz program, just like University of North Texas program I covered last year–except, of course that FHBB hails from the University of Central Florida.

The Flying Horse Big Band is prolific, yes, and they’re a whole lot of fun to listen to. (The Bat Swings!, if you recall, was focused on Nelson Riddle’s arrangements for the original Batman TV series.) Good News! is their new album, and it takes on a slightly more serious theme–covering classics from jazz masters such as Miles Davis, John Coltrane, Thelonious Monk and Antonio Carlos Jobim. This almost seems like an unnecessary shifting of the gears, of taking that lively and humorous demeanor of this ensemble and distilling it in order to pay a reverential  tribute to the greats. Perhaps Jeff Rupert, the inventive director of Flying Horse, felt it was time to stop all this fooling around.

Good News!, however, is far from serious and stodgy. One entertaining feature is framing such standards as “‘Round Midnight” and “The Serpent’s Tooth” with an almost epic playing of John Lennon’s “Imagine,” in two parts, with Jeff “T-Bone” Gerard providing heartfelt commentary along the way. Another is the inclusion of the UCF Studio Orchestra in order to give these classics a lush, expansive field. This is where I discovered another unique feature of the Flying Horse Big Band–they play so smooth and so big, they often sound like an orchestra even when the orchestra isn’t playing.

Sometimes it’s difficult for me to listen to too much big band jazz at once, even when it’s an outfit as dynamic and talented as the Flying Horse Big Band. But here’s the thing. As I mentioned in my Filter review yesterday, I’m currently reviewing the Von Schweikert Audio ESE loudspeakers with that monster tube amp, the McIntosh MC2152. I’m getting a gigantic yet effortless sound from this combo, and I’m cranking up the volume a little higher than normal just to take advantage. Good News! was a rare sonic treat for me, a big exciting blast of sound that gave me goosebumps every few minutes. I can’t think of a more sublime big band jazz release to explore this wide open landscape than this.

Welcome to the Best Amplifiers section of the Part-Time Audiophile Buyers Guide for 2022. The Guide is more than “We heartily endorse this [fill in the blank ].” This collection represents our enthusiasm. Every product […]

I’ve come to the realization that I like my jazz on the soft side. I’m not talking about lite jazz or soft jazz or any of that twinkly keyboard stuff, nor am I just thinking […]