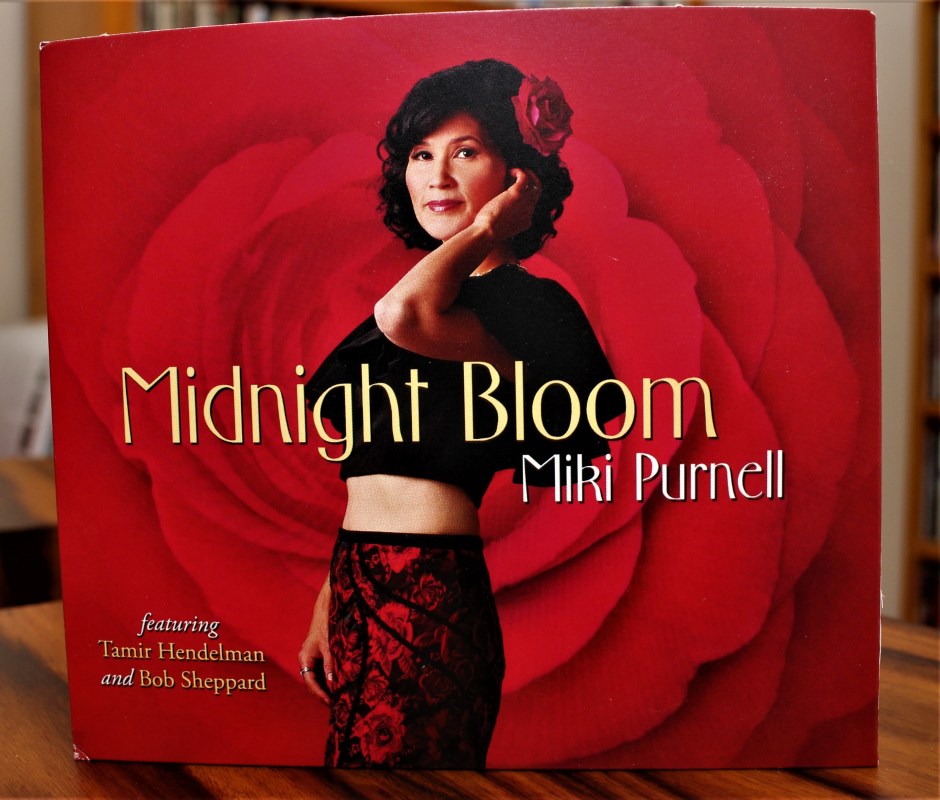 I’ve been struggling lately to find the suitable adjectives for jazz singers such as Miki Purnell. I used to employ words such as girlish or kittenish or coquettish, and possibly words far more embarrassing than that, to describe voices I consider sexy and alluring in a still somewhat innocent manner. In this day and age, that’s opening up a Pandora’s Box of hurtin’. But there has to be a way to express a voice that sends chills down my spine, a voice that makes me think a woman has just walked past me and oh my, what perfume is that? It’s becoming an old-fashioned conceit that sex sells, and that we should avoid it as much as possible, but Miki Purnell’s voice isn’t sexy in a crude or forward way. It’s just…adorbs.

Instead, I’ll focus on Miki Purnell as the exceedingly interesting person she is, one of those talented souls who came back to music after living the muggle life for a while. Purnell was raised in Japan, and she grew up taking classical piano lessons. In college, she discovered Miles Davis and Bill Evans and Chet Baker and eventually wound up singing in a jazz club. After college she went down another interesting path–she became a doctor in Hawaii. Her only musical outlet was performing for nursing home patients with another physician who played guitar. She eventually wound up practicing in San Diego, and the music bug returned. She released her debut album, Swingin’ to the Sea, to strong reviews.

Now we have Miki Purnell’s Midnight Bloom, which features standards with moon themes such as “No Moon at All” and “‘Round Midnight” and “The Night We Called It a Day.” As Purnell explains, “I want to invite listeners to a midnight garden where beautiful darkness, silence and stillness harmonize with night blooming flowers.” While I still categorize her voice as coy and demure in the sweetest possible way, there’s also an underlying maturity and intelligence that makes me feel a little guilty for succumbing to her immediate charms so capriciously. She has perfect pitch, for example, and her focused approach to these arrangements is traditional yet complex.

Miki Purnell usually accompanies herself on piano, which she is reportedly doing for her third album, but her she relies on the excellent Tamir Hendelman and his fluid, Bill Evans-inspired runs on the keyboard. The rest of her ensemble is perfect, including drummer Dan Koba, bassist Alex Frank and Bob Sheppard on sax, clarinet and flute. They keep it light and breezy to match Purnell’s voice, and this set is as consistently delight as that goosebump-inducing voice. I guess I’m just nursing a crush here, which can’t be a bad thing, right?

It was such a pleasure to find Margules Audio exhibiting at FLAX 2020. I’ve known the Margules family of Mexico City for many years, back to when Colleen and I used to regularly visit their […]

I saw this Jacqueline Kerrod CD in the review pile and I though oh, harp improvisations! I like the harp. I have plenty of harp recordings that I use as demo tracks. I adore Joanna […]

I tried to tell you about this new release from 2L Recordings before the holidays, but I just ran out of time. Fryd, from choir conductor Tove Ramlo-Ystad and her singers, known as Cantus, sounds […]