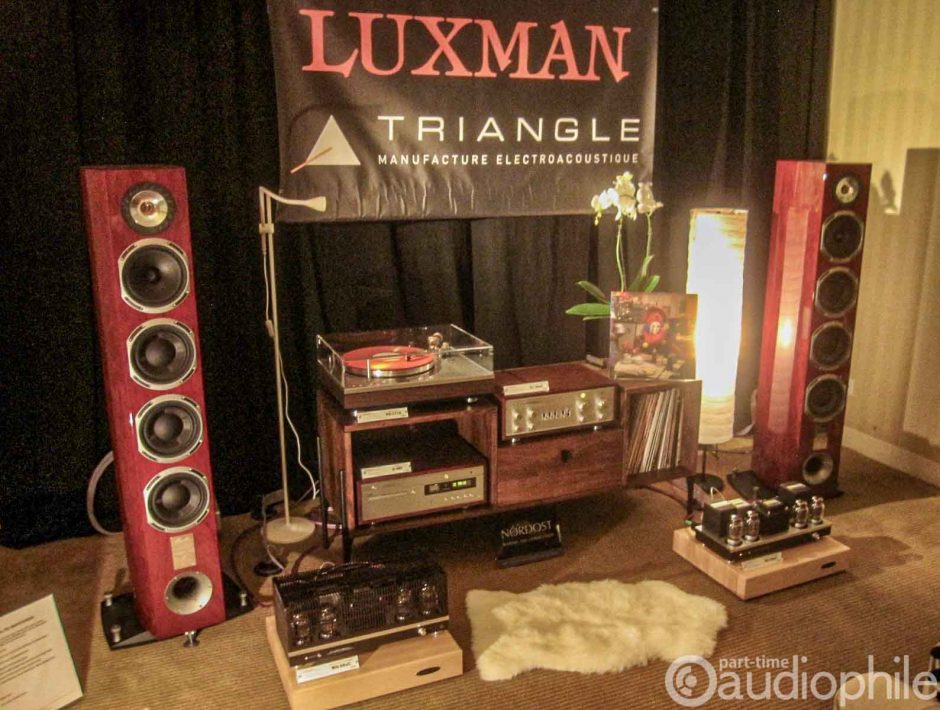 This room was getting pretty crowded and when we entered the room, we were temporarily stuck in the narrow entryway hall.  We were hammered with bass, which was probably being amplified by the Helmholtz resonance of that space.

Fortunately, when I was able to take a seat in the listening area, the bass dropped to a more proper level.  What was cool about this room was that Luxman was attempting to show a similar line of components to what they showed at their debut at the New York Audio Show 43 years ago!

The host pointed out the following components with all but the amps housed in a retro-style component cabinet complete with a record storage compartment:  PD-171A turntable, D-380 CD player with switchable tube or solid stage output, CL-38uC preamplifier, and MQ-88uC monoblock KT88 tube amplifiers (wired in triode).  Speakers were Triangle HiFi Magellans.

An LP by an Irish pop singer, Roisin Murphy, called “Overpowered” was playing and it had a distinctive, heavy bass disco beat.  It was a fun selection and certainly was not intended for critical listening.  With that caveat, I’d have to say the room was a success and the crowd of people trying to get into the room would lend credence to that.

Long Beach will never be mistaken for Munich, but I do have reasons for wanting to come out to T.H.E. Show 2019 in Southern California. I was born and raised in very nearby Orange County, […]

Sometimes I think that our North Carolina crew has all the fun. They visit each other, hear all the cool gear that’s been coming in for review, swap back and forth, and I’m over here […]

Luxman has been on an incredible roll over the last few years, producing one stunning world-class component after another, But the announcement of the new Luxman LMC-5 phono cartridge–the first Luxman cartridge in 40 years–is […]