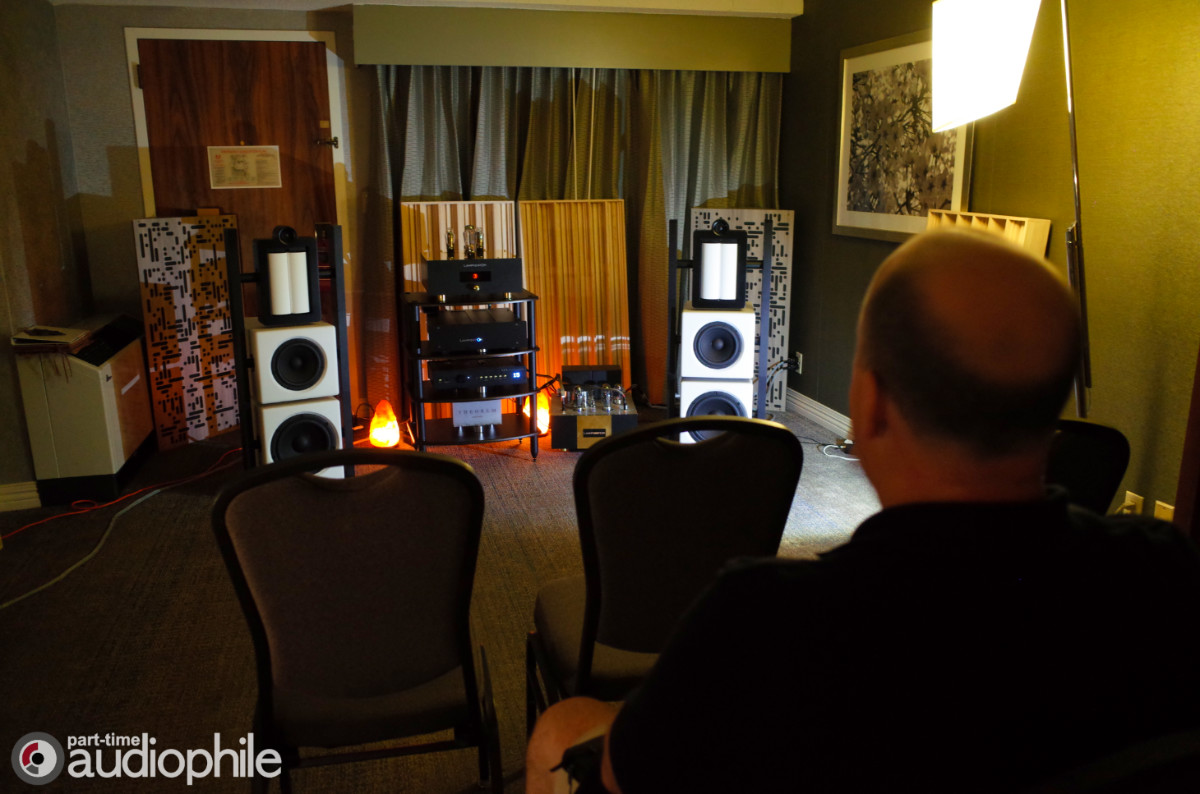 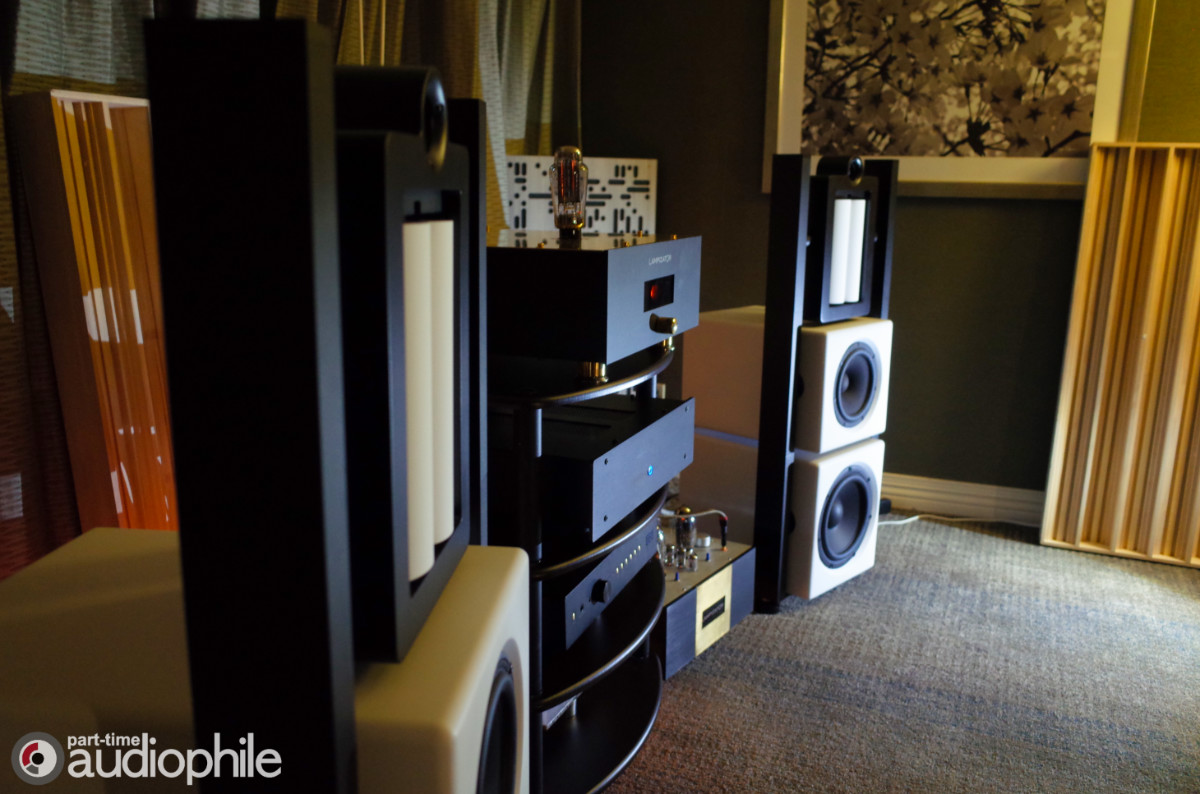 Destination Sound Group, the North American distributor for AudioNec, LampizatOr and Final Touch Audio, was debuting the new Lampizator KT150 Stereo Integrated Amplifier. The LampizatOr KT150 however was configured in the show system as a stand alone power amplifier, to be used between the Linear Tube Audio MicroZotl preamplifier and AudioNec EVO #2 loudspeakers. 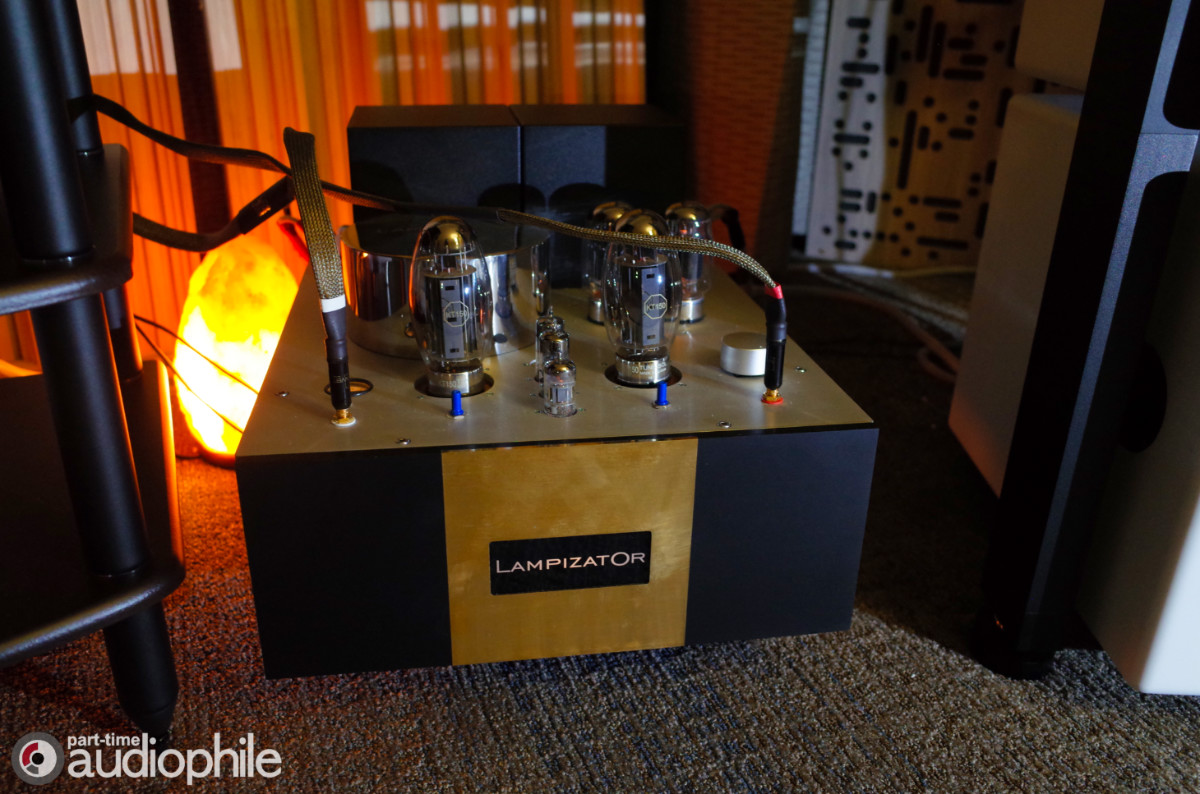 Based on features of 211 Pacfic monoblock amplifiers, this smaller single chassis integrated amplifier features E80F pentodes in the input stage (triode mode), ECC88 tubes as the pre-input stage potentiometer buffer. From there it’s KT88 driver tubes, a pair of KT150 output tubes. The connection between the KT88 driver tubes and KT150 output tubes is galvanic, capacitorless and transformerless. Volume is handled by a HATOR 48 step ladder. Biasing for this amplifier is manual and aided by a built in meter. 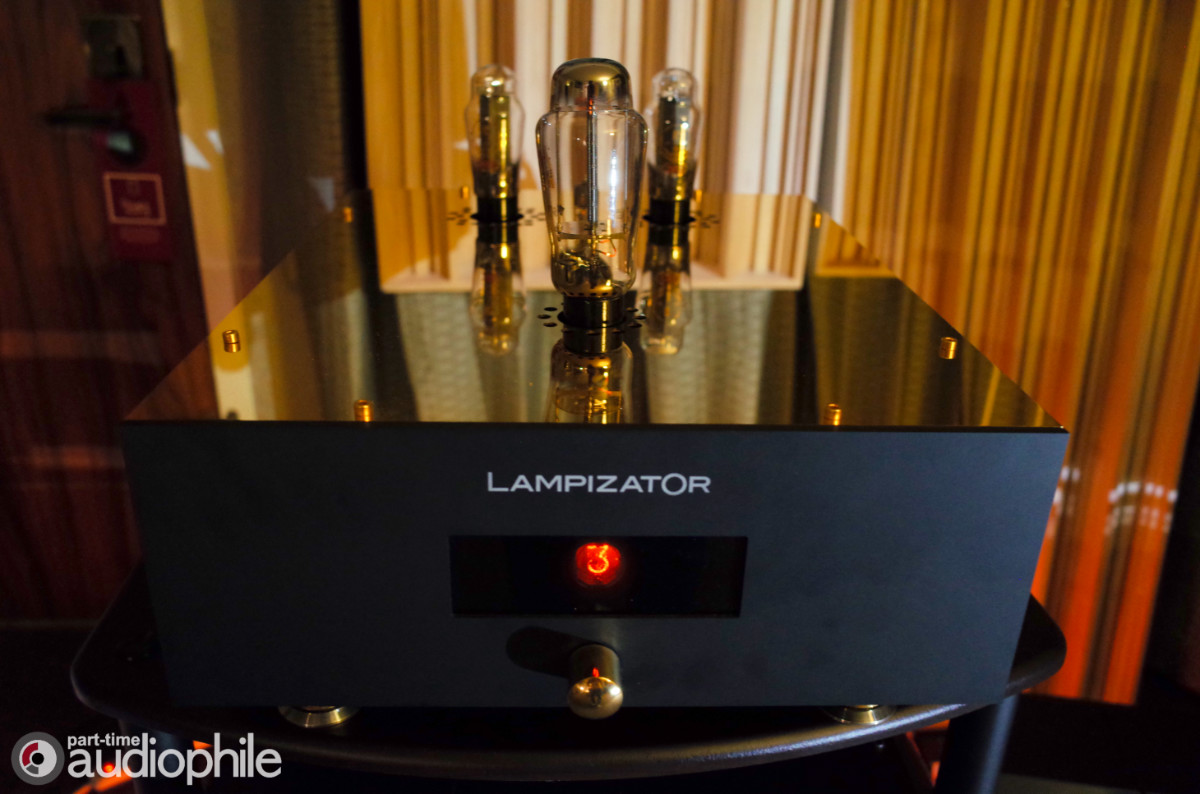 For the system at Capital Audiofest 2019, we had the middle of the pack EVO #2 which gave of insight to both the EVO #1 as we were able to de-activate the subwoofer, and the EVO #3 as we were given a taste of what the speaker was like with half of the powered bass available in the larger model. 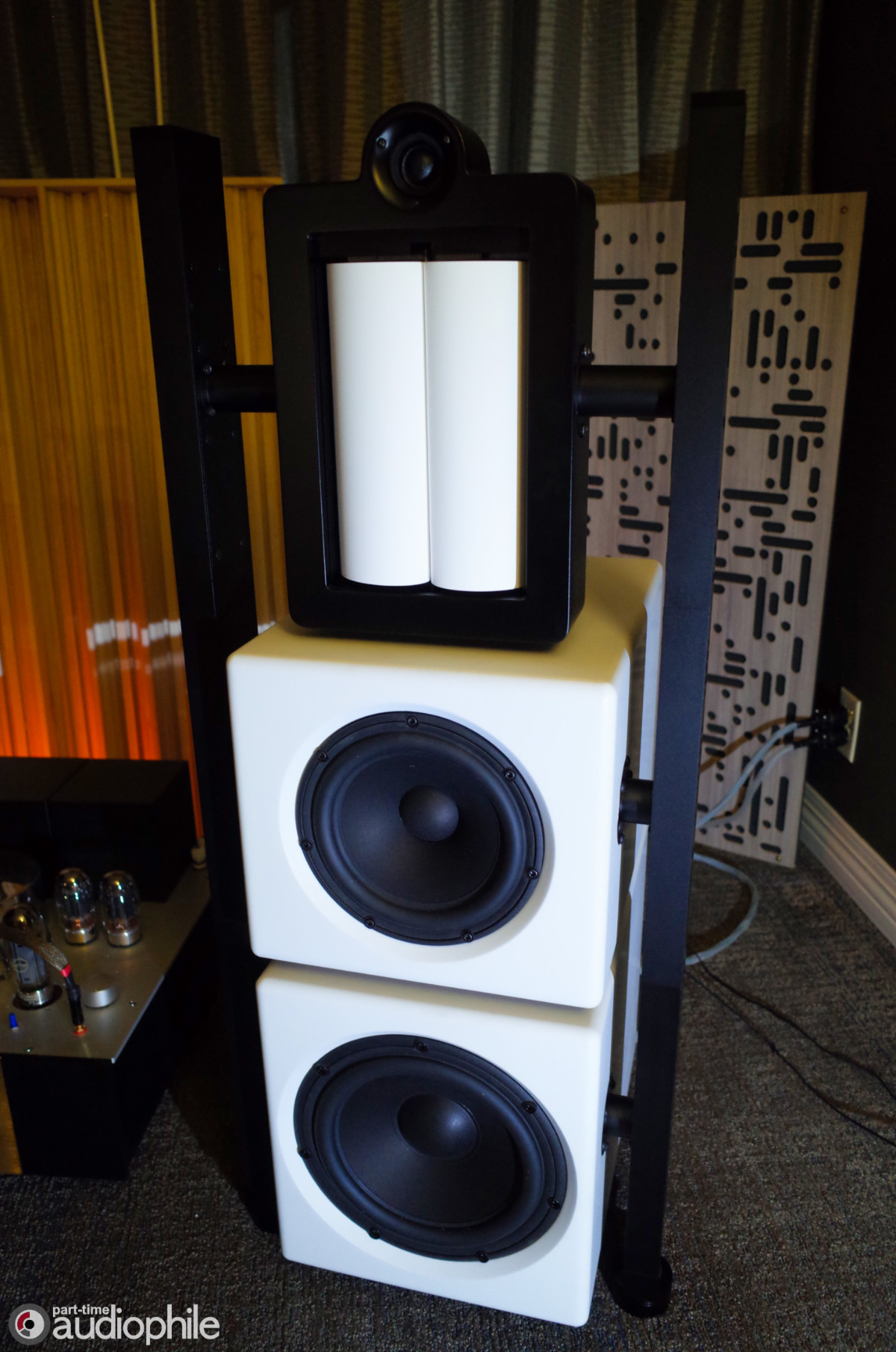 All three EVO LINE models share the DS31 wide-band duopole driver, super tweeter, and 8.6-inch passive low frequency driver cabinet. If configured alone in that description, we’d have the EVO #1, which by itself is a 6-Ohm, 89dB sensitive three-way loudspeaker that plays across a frequency range of 35Hz at the low end, up to 45kHz at the extreme high end.

For our EVO #2 as configured for the show, an additional 11-inch powered subwoofer is added to each right and left speaker. Upping the sensitivity of the system to 96dB, and reaching down into the lower frequencies at 18Hz. 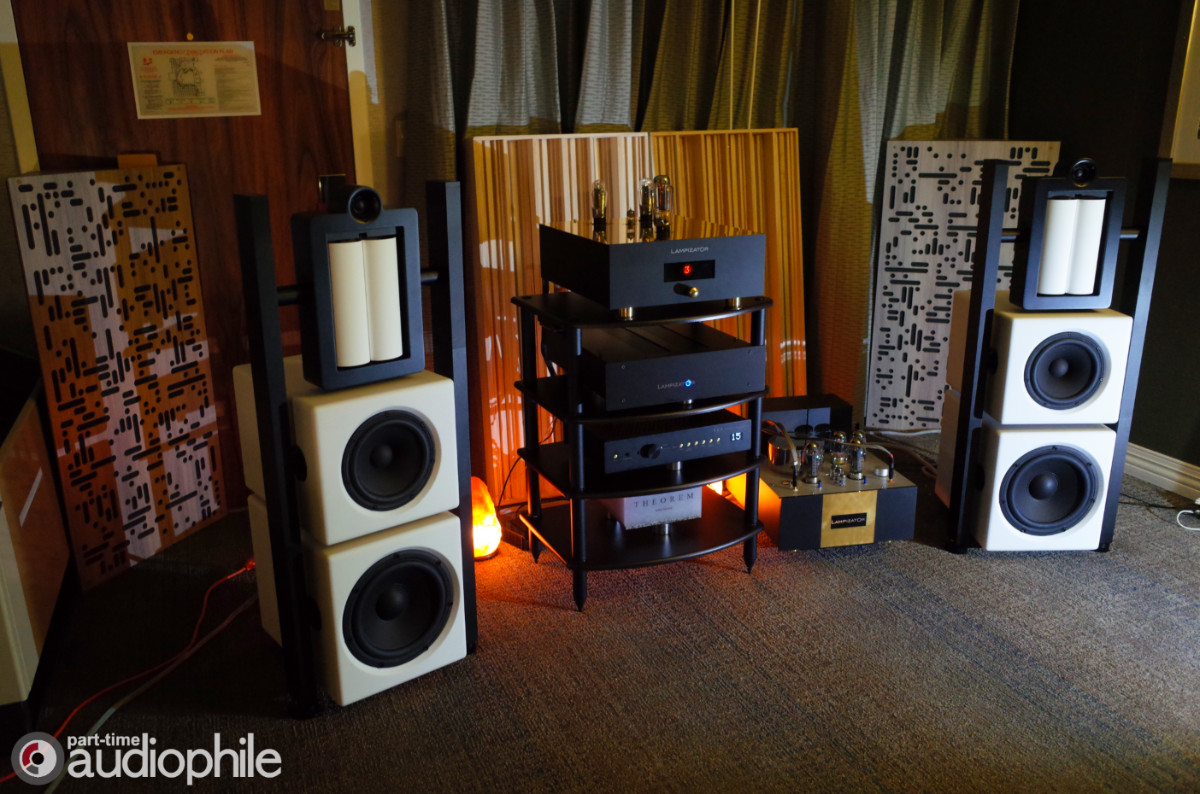 The unique DouPole driver faces the front and rear of the loudspeaker, energizing the room in both directions. It’s crossed in at 400Hz and plays up to 20kHz where the super tweeter takes over. It should be noted that the super tweeter and DuoPole driver can be independently amplified from the enclosed 8.6-inch low frequency driver. Making it possible for true bi-amplification, aside from the powered subwoofer channels. 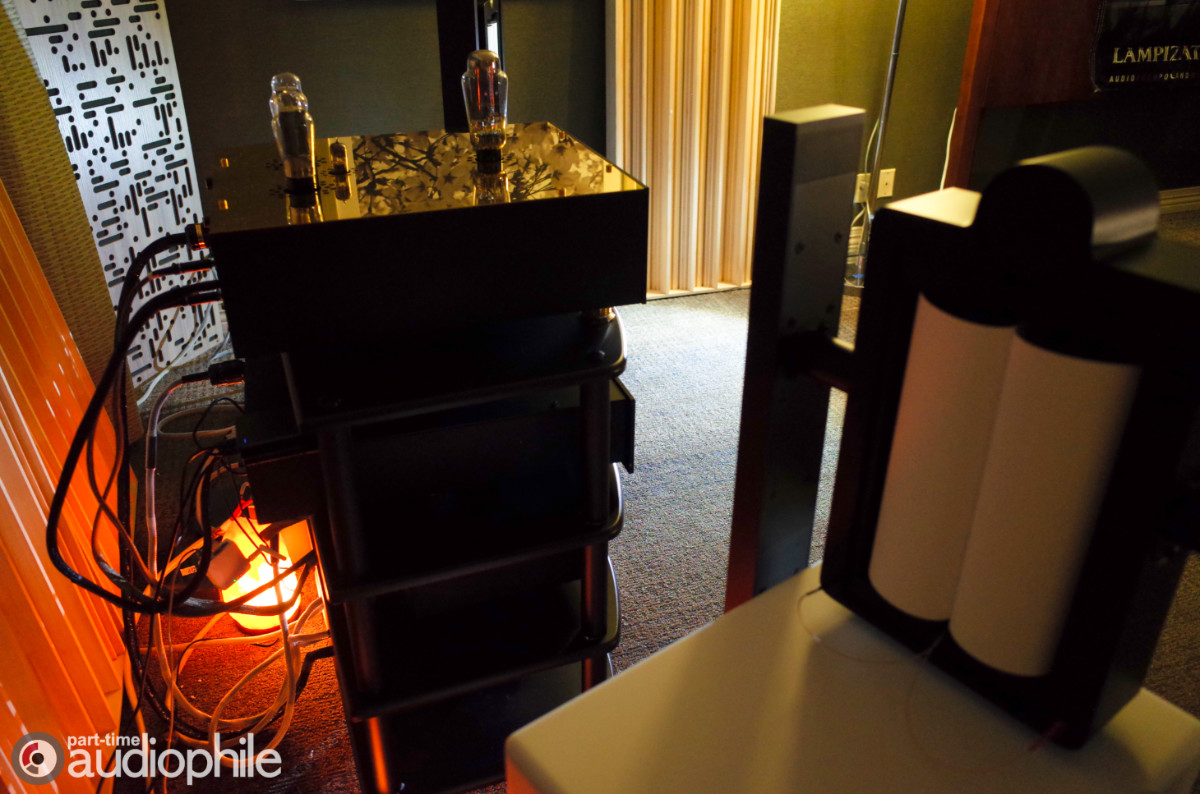 Things got right down funky (in a good way) in this exhibit room. The AudioNec speakers looked and sounded different from anything I had heard at the show. They played the upper frequencies like open-baffle electrostatics, yet had a really nice point source image on the front edge. Soundstage depth on these new speakers was deep and controlled magnificently by the LampizatOr amplifier. Bass and mid-bass frequencies from the passive 8.6-inch low frequency cabinet was impactful and gritty (also a good thing) where the bass detail called for it, for example with piano. The powered subwoofers integrated better than I would have expected as I’m not sure how they were delivered a signal. Was it from the KT150 or the LTA preamplifier? I should have looked. Overall, the package melded well and played wide, tall, and deep in all senses of those words. 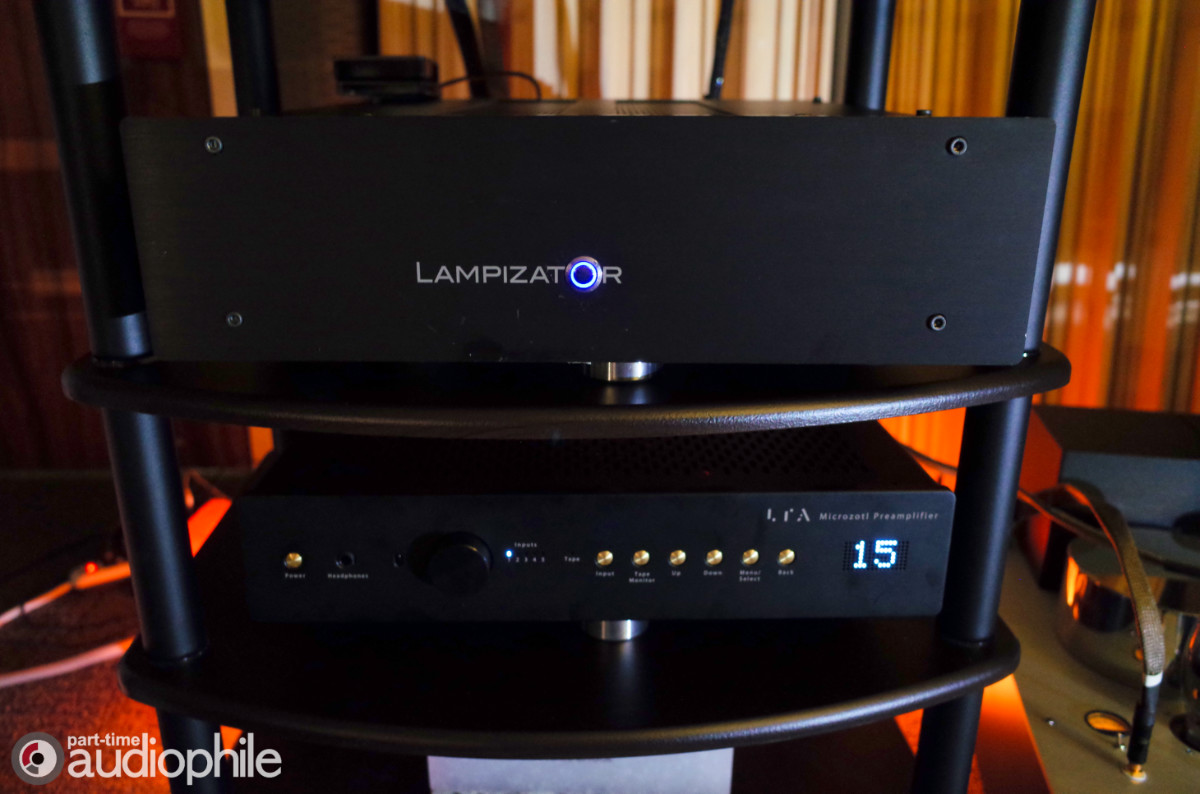 All cabling by Final Touch Audio

I thought a 2019 Capital Audiofest preview from me was necessary, since so many products featured at the show are being reviewed (or have been reviewed) by both Part-Time Audiophile and The Occasional. This is […]

Welcome to the Best Digital Players section of the Part-Time Audiophile Buyers Guide for Summer 2022. The Guide is more than “We heartily endorse this [fill in the blank].” This collection represents our enthusiasm. Every […]

Devore Fidelity is still monkeying around, Doshi Audio goes hybrid, and J. Sikora sets a new Standard. The Story Doshi Audio has grown into its commercial and critical success, achieving recent prominence in the high-end […]