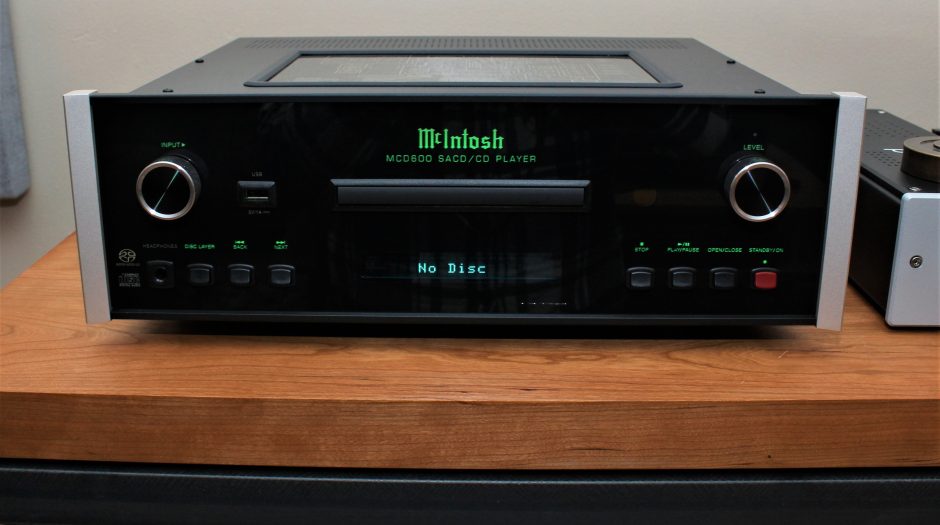 Before I discuss the McIntosh MCD600 SACD/CD player, I have to tell a story. Just a couple of weeks ago I overhead a conversation between two audiophiles who were discussing the continued role of compact discs in their lives. “I’m very tempted to get rid of my CD collection after I rip everything to a server,” Audiophile #1 said.

Audiophile #2 responded, “You know that in a few years CDs will become the same niche market as LPs, and I’ll have to listen to you bitch endlessly about selling off your discs.”

I think that’s where we’re at in 2020. All through the 2010s I represented high-end audio manufacturers that still sold basic CD players. Every year there had to be a discussion about the relevance of these products. Is there still a market in the USA? Should we just switch to DACs and servers? What type of customer are we looking for?

The answer back then, of course, was yes. Yes, there was still a need for a limited number of CD player models in a manufacturer’s digital line-up because there are still quite a few audiophiles who have a large collection of CDs and want to hear them on a good-sounding machine. Over that decade, however, that strategy evolved as our digital options grew. As audiophiles discovered the joy of hi-rez streaming, CD players had to provide a way for the DAC to be used separately from the transport. Digital inputs and outputs became the norm. That worked, so we moved on. For a while, anyway.

In 2020, where are we? Should CD players still be a thing? I’m one of those audiophiles who still owns thousands of CDs. I bet if I kept a log, a good 33% of my listening sessions involve the little silver discs. But I stream via Roon and Qobuz 33% of the time and the remainder is still devoted to LP. I still need a good-sounding CD player, but with the connectivity options to cover whatever happens in the next few years. 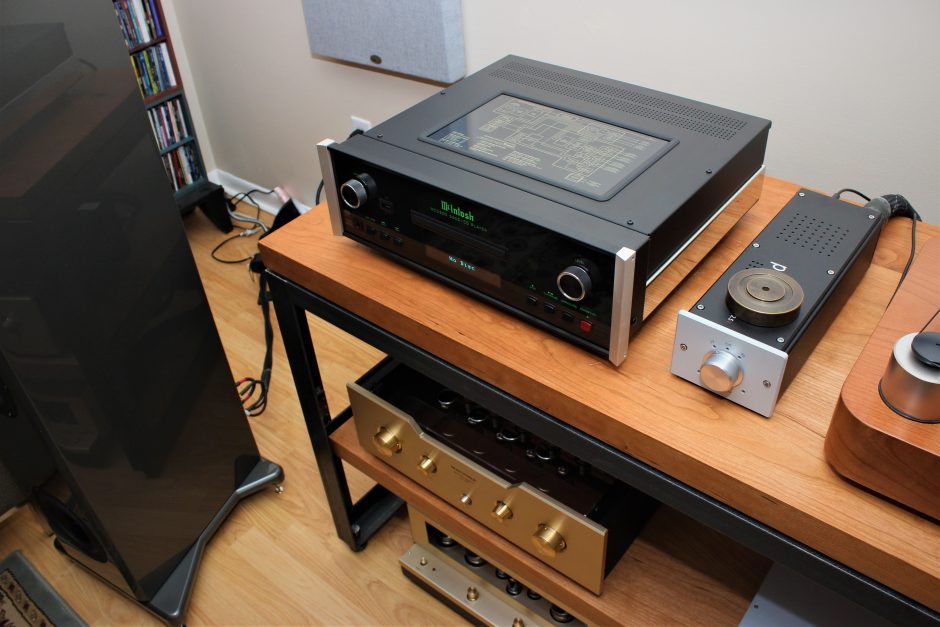 There is such a beast, and it comes from McIntosh Labs. I’d just returned to the Binghamton NY factory with the magnificent MC2152 power amplifier I reviewed for The Occasional No.6, and we had discussed a second review of something else. When the MCD600 SACD/CD player was mentioned, I immediately liked the idea and we made plans for a swap.

My first reaction to the MCD600 and its cornucopia of modern features was that it played SACDs. I’ve heard countless SACDs over the years, but never in my own system. I’ve never owned an SACD player. I own many CD/SACD hybrid discs from the likes of 2L Recordings and Analogue Productions and more, but I’ve never been able to do an A/B comparison between the two digital formats. So that was the biggest reason to bring this Mac back to Rochester.

Once I got it home, however, I immediately noticed that the MCD600 had a lot more to offer—especially considering my digital habits in 2020. First, it has a USB DAC with a port right on the front panel. My first thought had to do with streaming Qobuz directly from my laptop into the MCD600, but the port was designed for thumb drives.  I have quite a collection of those, and I rarely listen to them because it’s simply not easy or convenient. With the MCD600, it suddenly was.

That’s a great start, but what else can the MCD600 do that my 10-year-old reference CD player can’t?

First, there’s a new 8-channel 32-bit PCM/DSD DAC that operates in Quad Balanced Mode, which means that there are four DACs on each side. You can play music from USB flash drives, DVD-Rs, and just about everything else but Blu-ray Audio (something I need, thanks to 2L Recordings). You get fixed and variable outputs (both balanced and RCA), so you can use the MCD600 as a preamp and plug it directly into a power amp. You get a killer headphone amp—Mac’s High Drive. Best of all, you can get it all in a classic McIntosh chassis, with green lights and glass plates and everything else you desire from Binghamton. 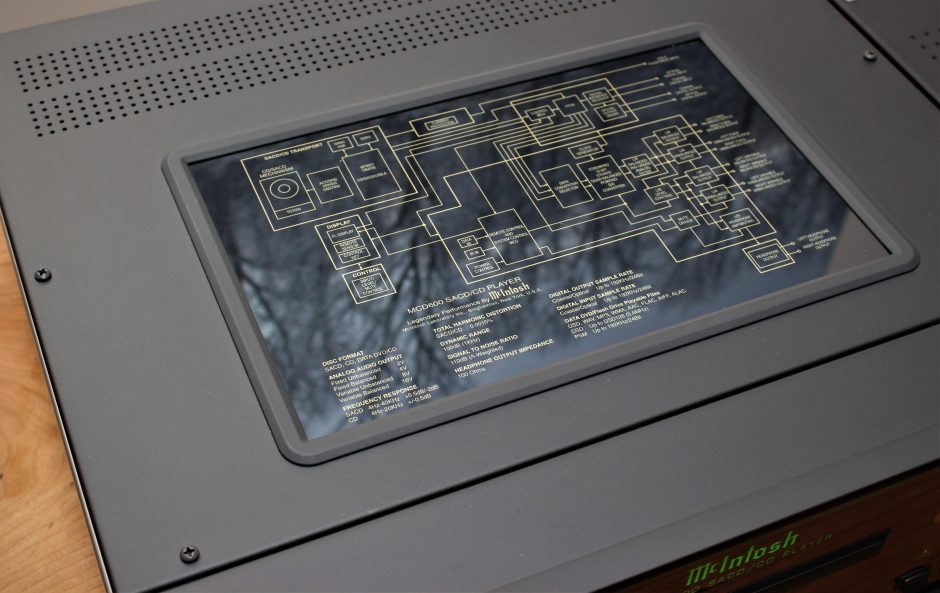 It’s tough to just say “the McIntosh MCD600 sounded really nice, with a lovely midrange that blah blah blahs.” That’s because the MCD600 immediately assumed the role of a very important new tool for my system, one that changed the way I evaluated gear. That’s vague, so I’ll elaborate.

With the McIntosh MCD600 in my main system, I suddenly had more flexibility when it came to building systems. As I get sucked deeper into this whole reviewing thing, three distinct systems have emerged in my home—the reference system, the warm-up system in the office and my headphone/streaming rig, also in the office, At various times each system can be limited in what it can do—for instance, I’ve ran both vinyl only and CD only systems. With the arrival of the MCD600, that became unnecessary.

In essence, the sound quality was almost an afterthought with the MCD600. ALMOST. I spent so much time rearranging systems and trying out the new configurations that it took me a couple of weeks to sit down and ask myself, “So…how does it sound?” 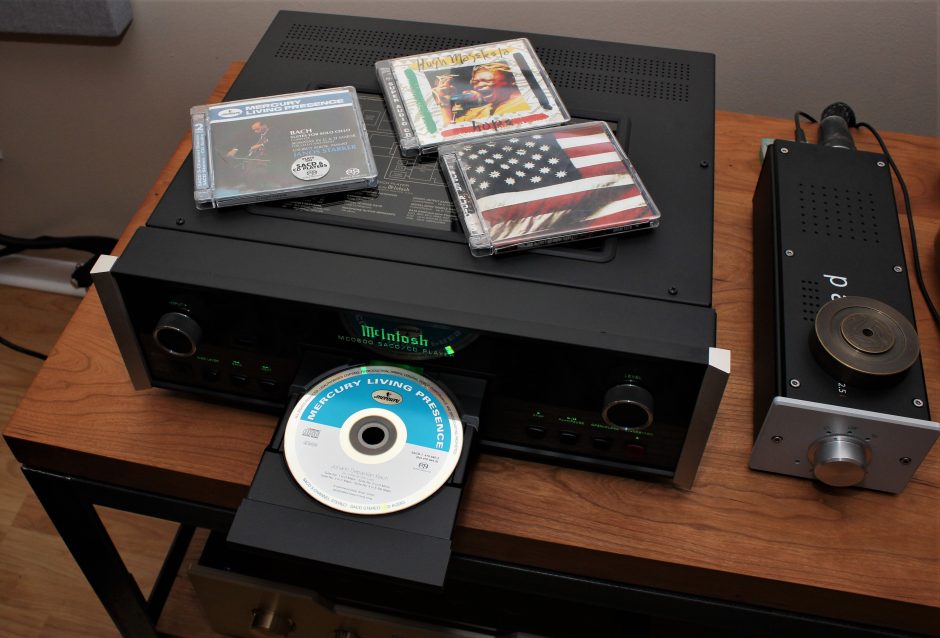 I’m sure you’re not interested in my views on SACD as a viable digital format in 2020. But thanks to that sizable collection of hybrid CD/SACDs, I can now provide a somewhat educated opinion on what I think. I did the A/B comparison thing on a number of hybrid discs, mostly from 2L, and I came up with nothing substantial to say. In my opinion, CD/SACD hybrid discs sounded better than just normal Redbook CDs, for whatever reason.

By nothing, I also meant silence. We’re talking about the space between the notes, as Miles Davis and thousands of audiophiles used to say with some frequency. When I first started playing with Blu-ray Audio discs (with a $66 machine from Samsung that was purchased at a supermarket, of all places), I first noticed how quiet the new format was, and how those proverbial notes emerged from a silky blackness. My first impression of SACD is pretty similar. It’s dead quiet. The noise floor is almost non-existent with the Quad Balanced Mode DAC and its lofty upsampling capabilities.

Okay, so I heartily endorse this format. It deserves a second chance in the marketplace. But the real fireworks were ignited once I started listening to the big guns—high-resolution CDs from companies like FIM that can take advantage of the MCD600’s 32-bit, 384kHz capabilities through that stupendously musical DAC. 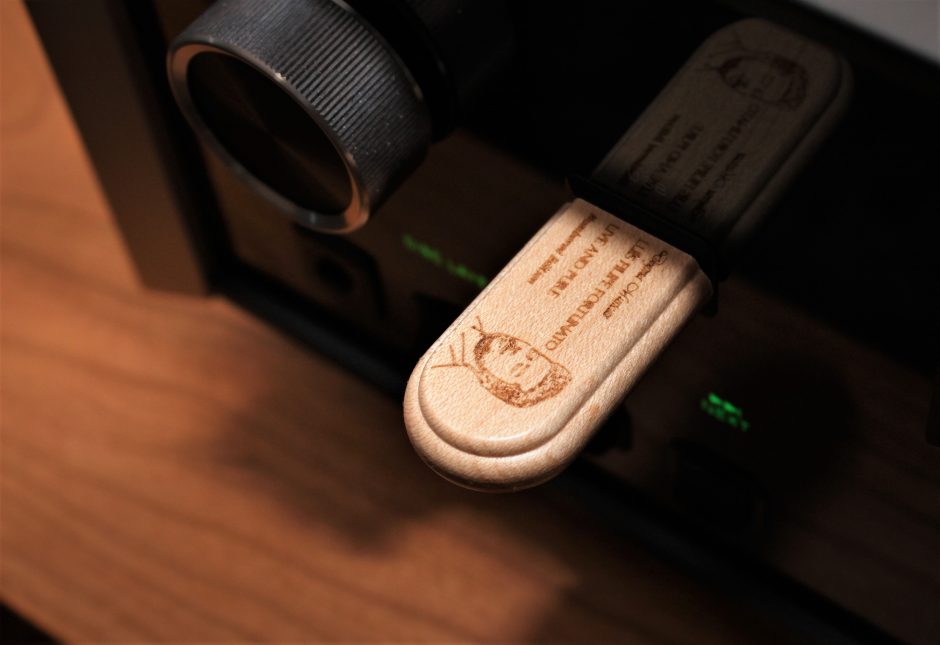 After comparing and evaluating the sound of SACDs, I moved on to what I call the big digital dog in my CD collection, Shota Osabe Piano Trio’s Happy Coat from FIM. This is a 24-bit 100 KHz 99.9999% silver disc, and I consider it the finest sounding CD I own. The warmth and the thrill of this recording, one of legendary bassist Ray Brown’s recorded performances (it was captured in 2004, shortly before Brown died).

Listening to Happy Coat on a system comprised of Von Schweikert Audio ESE speakers, Vinnie Rossi L2i integrated amplifier and MasterBuilt cabling, I was reminded of how relaxed and effortless hi-rez digital can be—satisfying enough to make this old vinyl guy forget about the source. Ray Brown’s bass was astonishing, even more than usual, with big fingers plucking big strings and extracting a fully-formed sound that dissects everything that’s going on in Ray Brown’s magnificent performance. I’ve never heard Happy Coat sound better than this. 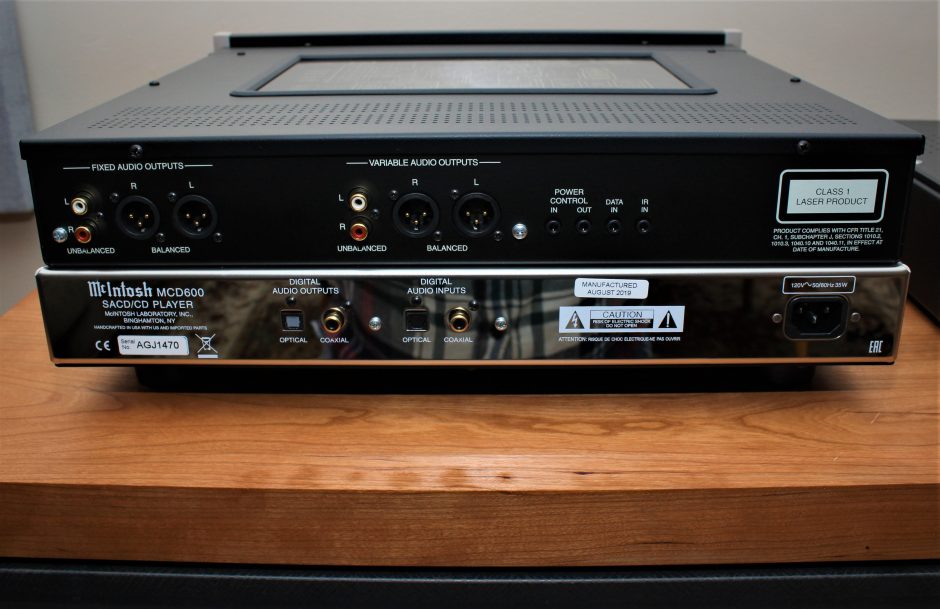 As I mentioned, I’ve been using the same CD player as a reference for the last nine or ten years. It has dual DACs, and a quartet of 12AU7s in the output stage. It sounds really good, and that was all I needed back in 2010. It cost about $4500, and I always thought it was a good value and a strong performer, which is why I still use it.

The MCD600 is $7000, and in 2020 that sounds like a lot of money for a CD player. For that extra $2500 over my existing deck, you do a get a lot—especially when you consider the cost of an outboard headphone amp that sounds this good, or four separate high-resolution DACs, or the choice of fixed and variable outputs, or the ability to play USB thumb drives or DVD data discs.

It doesn’t quite have everything I would want—I’d love to see Blue-ray Audio supported, and I’d love to figure out a way to stream Qobuz using this amazing DAC. (Thanks to optical and coaxial inputs, that can only be accomplished through an additional DAC.) But here’s the thing. I recently had a chance to play with a music server that also had a DAC, preamp, headphone amplifier and one curious feature that’s becoming common again—a CD ripper. My first question to the manufacturer was “Does it have a way to playback CDs?” It didn’t. That machine was approximately three times the cost of the MCD600.

I also know for a fact that there are a few of those one-chassis digital solutions out there. Many of them cost far less than the McIntosh MCD600 (didn’t Oppo make its name by doing this?). But I’ve always shied away from Swiss Army knife products in high-end audio because stuffing a bunch of parts into a single box creates a whole new set of issues.

The McIntosh MCD600 excels at the things it does do. That DAC is a wonder. The MCD600 is a beautiful product—especially if you’re in love with the classic McIntosh look. If you’re an audiophile who still wants to listen to a large CD collection with a great-sounding player, take a look at the MCD600. If you’re an audiophile who, like me, is looking for a way to integrate digital into an otherwise analog system, take a look at the MCD600. If you love all things McIntosh, this is the CD player you should own.

Now that the McIntosh Labs MCD600 is gone, back to the factory, I miss it. A lot. If I ever need another high-quality CD player with lots of digital features, this is at the top of my list. 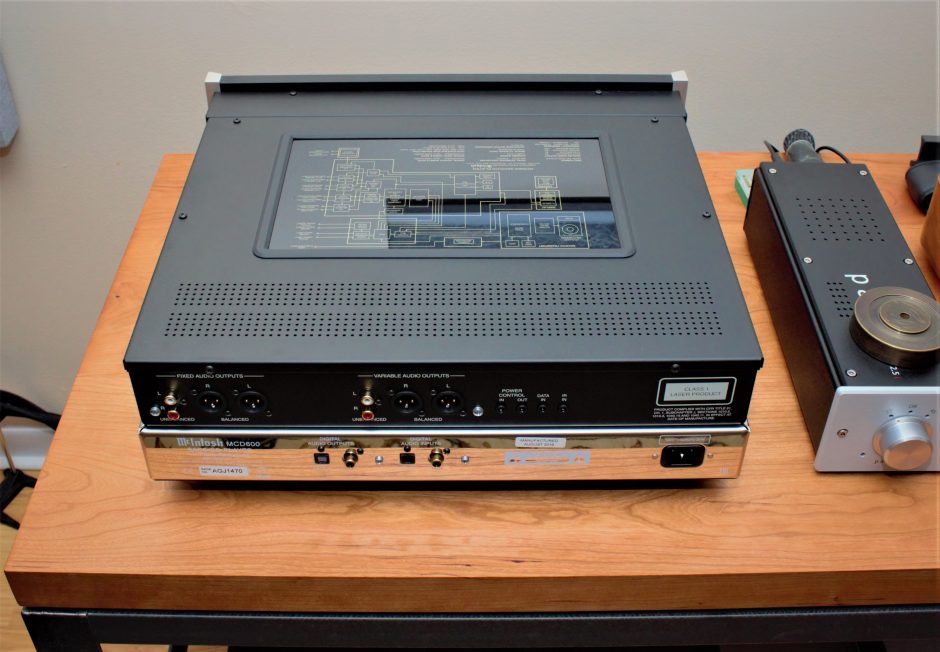 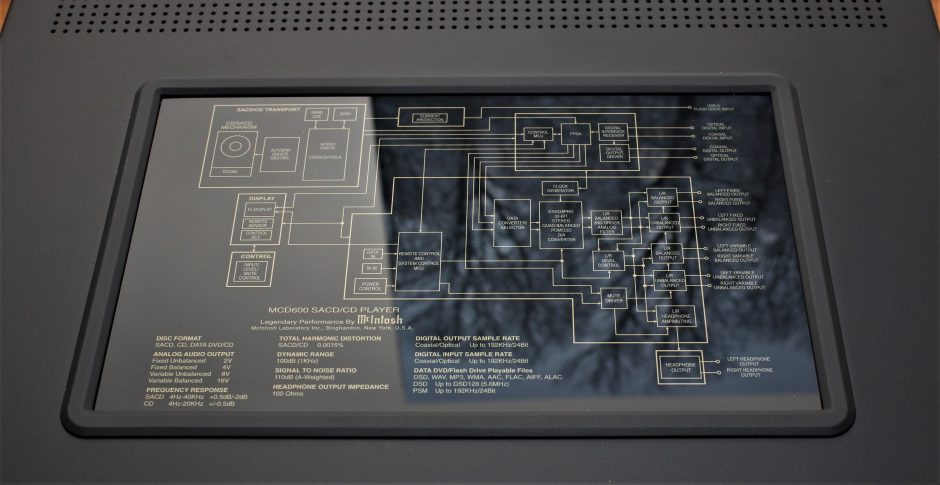 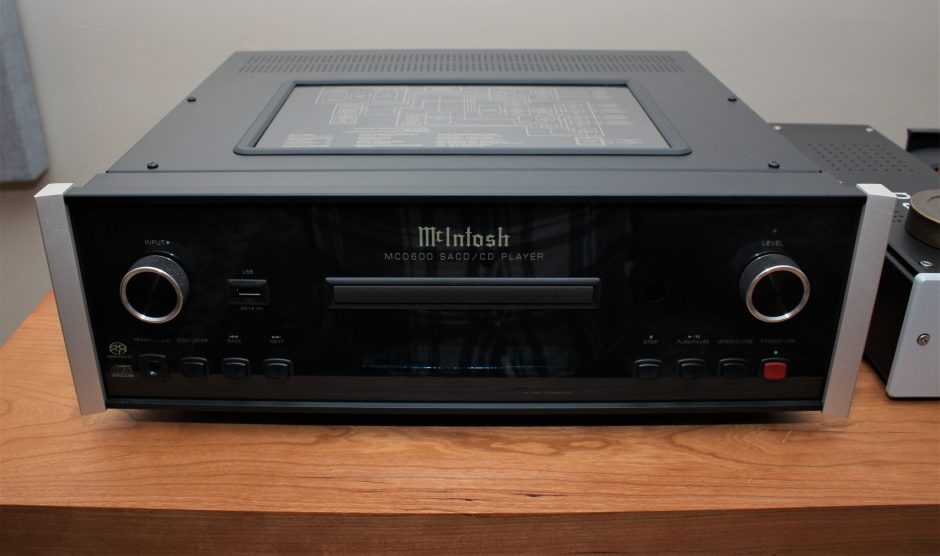 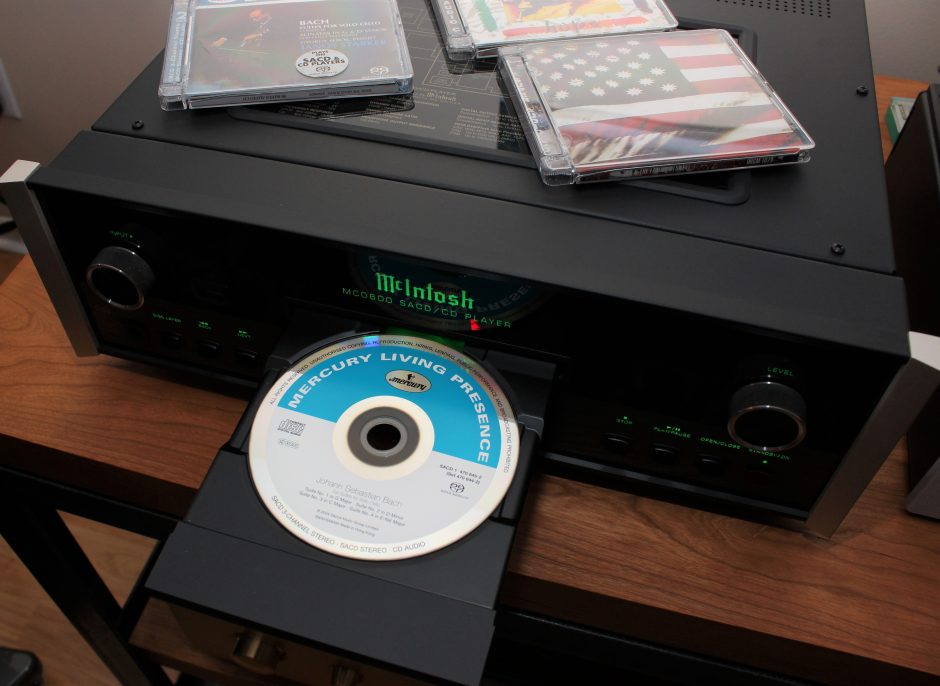 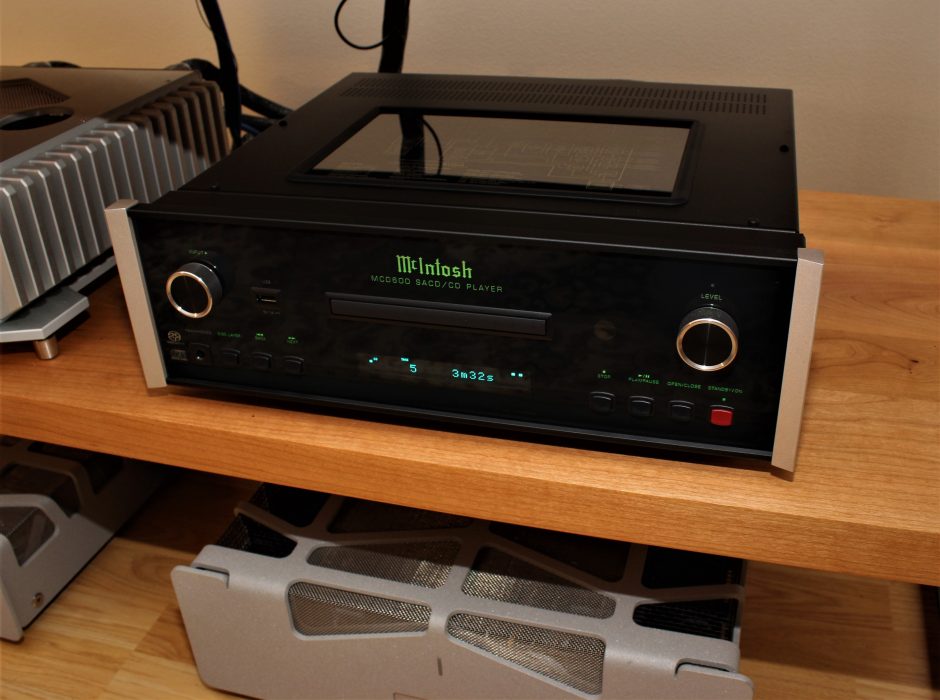 All the Real Girls, Movie Star Handsome | The Vinyl Anachronist

David Boswell, The Story Behind the Story | The Vinyl Anachronist

I’m sensing another trend in contemporary jazz. Here’s the formula: take a musician who has something new and original to say, and have that person play nearly every single jazz genre on an album. I […]

I’ve developed a strange habit while listening to new releases for the first time. I press play, wander through the other rooms, and I almost dare it to lure me back into the listening room. […]