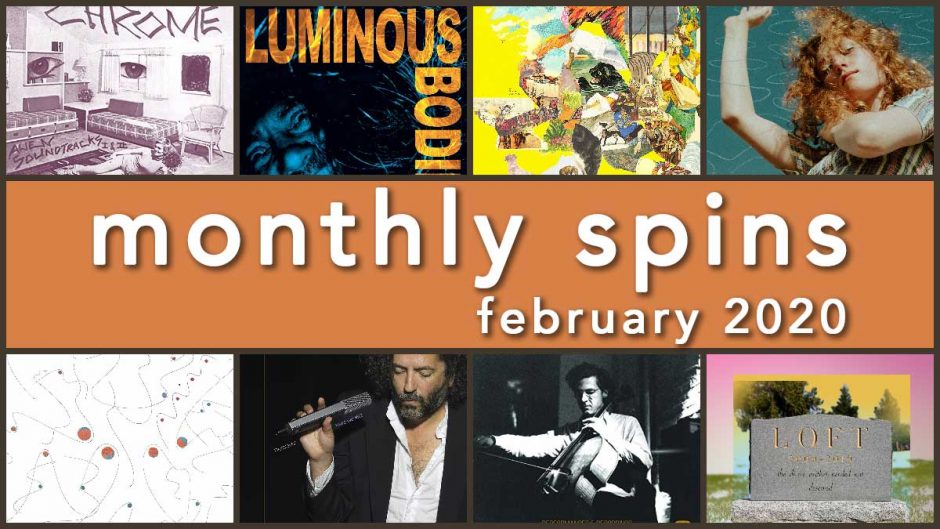 File Under: a gothic-style of vocalization

Keeley Forsyth is a composer, singer and actor from Oldham in the north-west of England. Her first album
is astonishing and emotional. Probably falls into the Weird Old UK moniker. If the title track doesn’t grab you
then certainly the rest of the album will. Almost gothic, close to but not folk. I can hear Brian Ferry singing these
songs on a solo album. With violins, guitar, some subtle effects, but even these are used rarely.

File Under: Aya is LOFT

Perhaps IDM run through the blender of a very attentive, percussionist-minded composer who asks the simple question: would you rather dance on the floor AND the walls at the same time? I recently watched a film released in 2006 and found myself amazed that not one person was huddled over their phones scrolling and texting. She is of this generation and her self-distracted, diffused and yet effervescent album that shines through all the noise.

Destroyer: Have We Met

File Under: Weimar style is alive and well

Dan Bejar comes from an exalted, nearly gothic place where songs appear as truncated news crawls. Thank god nothing rhymes. In some viewpoints you could say that Bejar does everything wrong but that might imply he shares some of the banal silliness of a Lana Del Ray. This is of course only a digression meant to distract you from the utter beauty of Have We Met. This will appeal to people willing to go along with flat delivery and an often perplexing sense of the surreal. Few songs disappoint with their intricate wordplay and an attitude that reflects back any sense of the merely charismatic artist trying to please his audience.

Here the mighty American cellist Charles Curtis cuts a sometimes microtonal journey throughout 20 years of his performances of rare and never heard before compositions from such composers such as Alison Knowles, Richard Maxwell, Eliane Radigue, as well as a few of his own. He offers up gems from Webern, Feldman, and Hume. What’s fascinating is how restrained and disciplined he is as he evokes such simplicity. A pure and holy place where they make diamonds.

The best live concert I have ever seen was at a small bar/performance place in Philadelphia called the Khyber Pass. Two drummers and a lead singer/sensei named Yamataka Eye, who literally ran up the stage walls and did karate style backflips while singing. Sometimes the drummers played in sync and sometimes not. YoshimiO is a founding member of The Boredoms and has had a long solo career playing under the OOIOO moniker. The most important element to both of these bands has been unabashed sonic exploration, combining noise and rhythmic counterpoint. This being the sixth album from YoshimiO comparisons to earlier work seem pointless. It’s a high standard to uphold and OOIOO are masters of their domain.

Squirrel Flower: I Was Born Swimming

File Under: a confident and talented new voice

Jay Som, Mitski, Ruth Rundle opened up this sonic territory of female singer-songwriters with heavy guitars and sharp-tongued lyrics. Squirrel Flower is the moniker of Ella O’Connor Williams, who currently resides in Boston. In this, her first full length, O’ Conner Williams creates a sonic palette fueled and empowered by the afore-mentioned artists. A strong statement and one worth a few listens, even if to identify the lyrics.

Ecstatic, ethereal, redolent or some hothouse bristling with rare orchids. Evanescent, liminal and without guile. Like the quoted referents Gooch’s lush atmospherics seem to flow like a liquid that finds every crack and seam and burrows into your brain.

The Homesick: The Big Exercise

So many emblematic points of reference. Yes, in some way it feels a little like 2010 given the Animal Collective-ish vocals and phrasings. Yet again it could have come 40 years ago, around the time of Yes, Fragile. There’s that Go-Betweens, Gang of Four, King Lizzard and the Wizard Gizzard guitar-driven, near motorik pace. If you told me they were from Melbourne, or out of Auckland I would hear the strains and wouldn’t question you further. This holds up for many listens.

File Under: there is nothing subtle about the Butthole Surfers

So much lovely distortion and inventiveness The song “Hey! You!” is sort of a perverted hillbilly rocker. The sort of Trash invention where Luminous Bodies lets loose with blistering acid vocals and a Montrose-like intensity. And what exactly is acid rock? It’s fast, loose and is not afraid to go right over the edge in each song. This sort of attention to detail and unabashed invention is rare these days. Since these are Brits there might be multiple levels of deceit going on: irony, post-irony, blatant unhinged self-parody. None of this matters, except: Does it rock? Is it relentlessly unforgiving and possibly drug-fueled mayhem? Yeh Yeh Yeh.

File Under: It’s the acid strong sound of rock n roll cooking at a roaring boil on the stove.

This is not a new release but I add it to this list because I consider it a lost classic. You could say that about Chrome’s entire catalog. Beginning with the late 70’s, and slightly ahead of they’re time, Chrome defined a sound fired up by the Stooges and Industrialized Joy Divsion. Alien Soundtracks pretty much describe all of they’re albums even though it came 2nd. It was the additional guitar of Helios Creed that made the whole thing work. This is one talked about by other musicians and album archivists like a ghost record because only a few dozen that were initially pressed. Anyone interested in the combination of rock and industrial that first emerged around 1980 should give this a couple of spins. If you don’t have this in your library, you should.

by Carlos Guzman Technics RS M63. That was the first cassette deck recorder I bought with my own money. On monthly installments, I paid $21.50 for 24 months with my funeral home’s attendant part-time job. […]