Words and Photography by Dave McNair

When any audio company designs gear, there are many things involved in that process but a few common factors emerge: measurements, listening, and the people that perform those functions. People, especially the person(s) directly part of the design process that incorporates listening evaluations are an integral part of the product development. Even equipment designed with neutrality in mind has a sound, and those sometimes subtle sonic attributes can form a ‘house sound’ across different pieces of equipment in a line.

Recording engineers, mixing folks, and even producers have been familiar with the house sound of famed audio designer Rupert Neve for many years. Recently, with the company’s entry into the audiophile market, the two-channel and head-fi peeps can now discover what the pros have known and loved since the late ’60s. 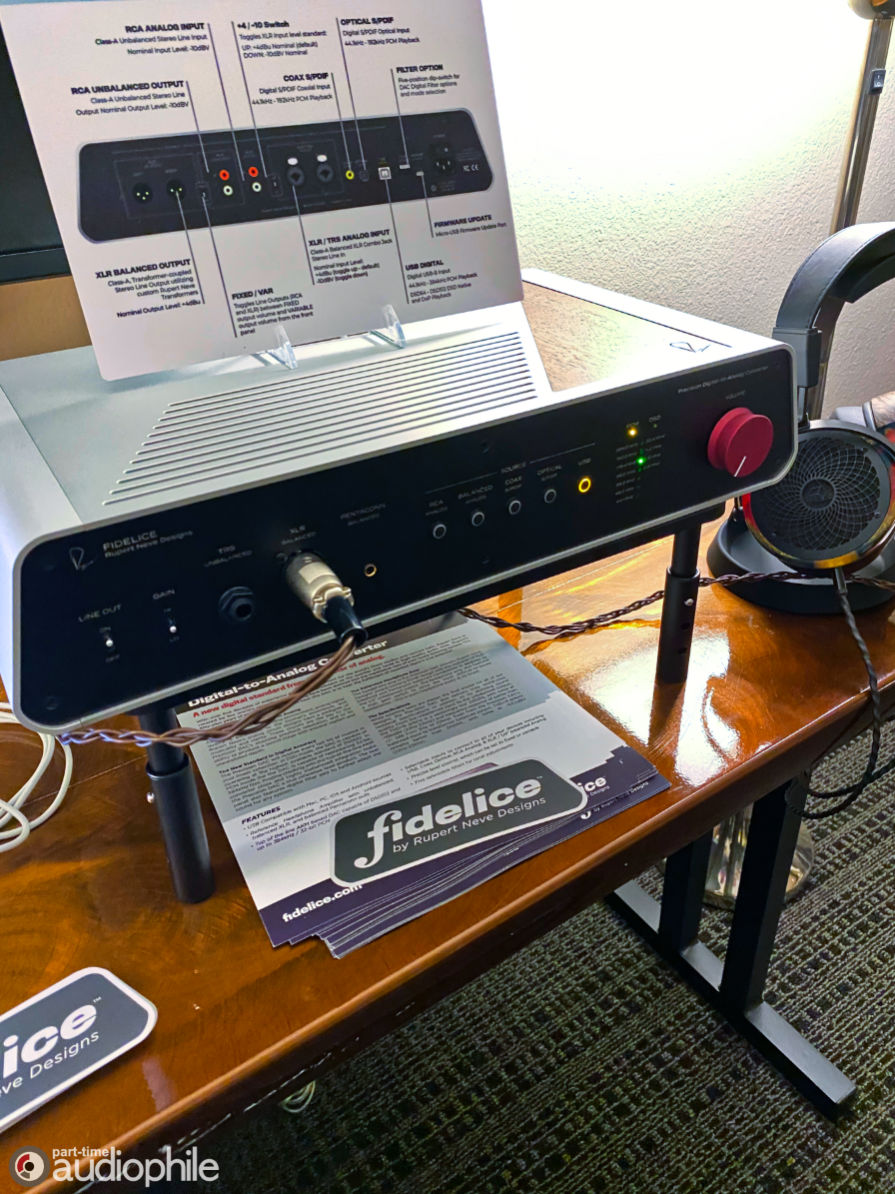 I had an opportunity to hear a few of the awesome offerings from Rupert Neve Designs with their new Fidelice line of products at the 2020 Tampa Audio Expo starting with the Fidelice Precision DAC ($4,995 USD). It’s a DAC, a headphone amp with true balanced output, and has a fairly flexible array of inputs and outputs with controls to enable usage as a preamp/control center. Balanced XLR and RCA analog inputs with switchable +4db and -10db levels is a welcome feature for system interfacing. Coax and Optical S/PIDF and USB inputs are digital-in options. I would have liked to see an AES/EBU digital input, though that’s not a deal breaker. Analog outputs are balanced XLR and single-ended RCA, both with fixed or variable output control.

I found the sound of the Fidelice Precision DAC to be instantly engaging while listening to Rosson Audio Design RAD-0 and Dan Clark Audio (formerly Mr Speakers) Ether headphones. I could hear that same magic Rupert Neve sonic signature that I’ve found so appealing in the classic pro audio designs. Detailed, textured, forward without being aggressive with a phatt’ but focused low end. Rupert himself told me years ago that he likes to do final tweaks based on listening to choral music to nail that difficult to reproduce massed vocal sound, so classical or jazz music lovers shouldn’t be scared by the Neve rock pedigree that most are familiar with.

I also listened to the Fidelice Precision Headphone Amplifier ($1,195 USD). Using it with the less than easy to drive Sennheiser 650’s, it was clear this little guy has the beef to rock any set of headphones you throw at it.

I didn’t hear the Precision Phono Pre ($1,195 USD) but I’m looking forward to quality time in my home and studio systems with this and the Precision DAC, at some point in the near future.

My hat is off to RND for these new exciting additions to the audiophile market.

Well it’s been another amazing year for us here at Part-Time Audiophile, and this holiday season has snuck up on us all too quickly once again. So, since December 25th is all about giving, and […]

Perfect Sound Taiwanese maker Perfect Sound was demonstrating their stylish in-ear headphones as well as their full-size d901 “Dido” cans. I listened briefly enough to the d901 think that the sound and build quality seemed […]