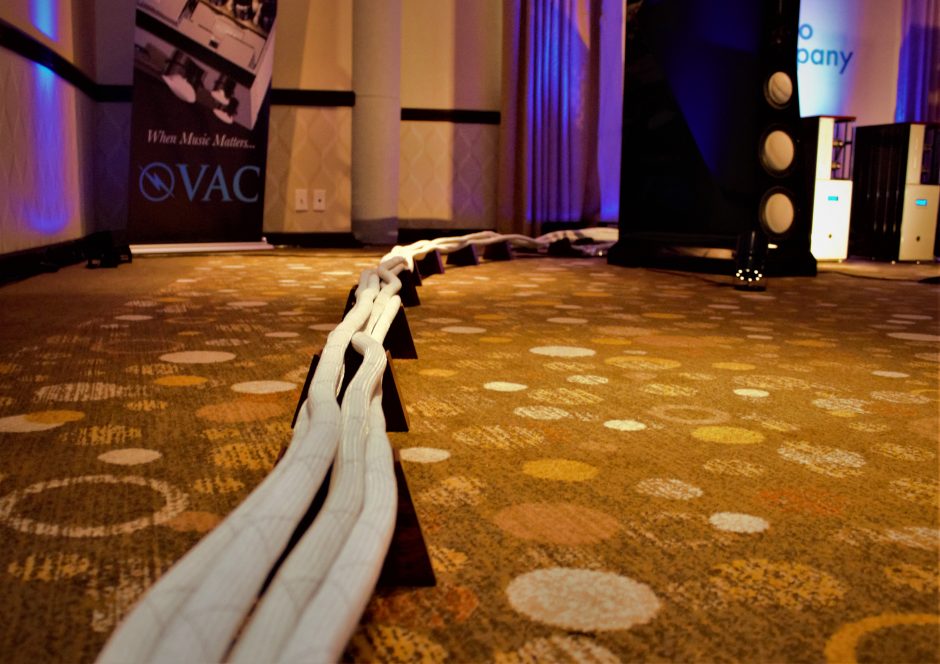 My reason for wanting to cover the 2020 Florida Audio Expo was ostensibly about taking a break from the cruel Rochester winter. When I arrived in Tampa on Thursday evening, the temperature was in the upper 70s and it was remarkably humid. I saw palm trees everywhere and thought oh, this must be the place. Later that same evening a few of us were herfing on the back patio of the Hilton Embassy Suites–I had just mentioned that I was especially anxious to visit Tampa’s Ybor City, one of the few magical spots in the world for premium cigar smokers outside of Havana–and suddenly we all received a weather warning on our cell phones. A tornado warning. Right here, at the hotel, fifteen minutes. Seek cover.

Fifteen minutes later, patio furniture was flying everywhere while the hotel employees were scurrying around and try to batten down the hatches. I tried to finish my cigar–never leave a man behind, I always say–but eventually I had to crawl back inside. That was a really good cigar, too. Totally drenched.

Welcome to the Florida Audio Expo in Tampa, Florida. This was my first year, and only the show’s second. I can’t tell you that it was much bigger than last year–Eric Franklin Shook already did–but I can tell you that apart from the tropical cyclone it was a smoothly run show that featured many great-sounding rooms. My only complaint was that the show didn’t feature a marketplace where you could buy music or visit smaller businesses at their booths. High-end audio shows need that to be a total success. Next year, perhaps?

In his wrap-up, Eric mentioned that most of the rooms sounded great. I demur slightly. At our last high-end audio show, the Capital Audiofest, almost every single room sounded excellent with very few exceptions. I think the rooms at that particular hotel, also a Hilton, are just well-suited for audio shows. I felt a little differently about this hotel. Many rooms had issues–room nodes, odd reflections, systems that were clearly too big for the room they were in. As a result, there was a greater gap between the rooms that sounded magnificent and those that didn’t. (Note that if I don’t mention you below, it doesn’t mean I thought your room was bad. But a handful were, well, troubling.)

I’m not sure if there’s anything Embassy Suites can or should do since it was a lovely place and the staff was organized and exceptionally friendly and my sleeping room was downright extravagant. I’m not sure if there’s anything the show organizers can do, either. Let’s just say that some exhibitors figured it out, and that room treatment and meticulous set-up practices are essential for this show.

So without further ado, here are my choices for the Best Sound at the Florida Audio Expo. 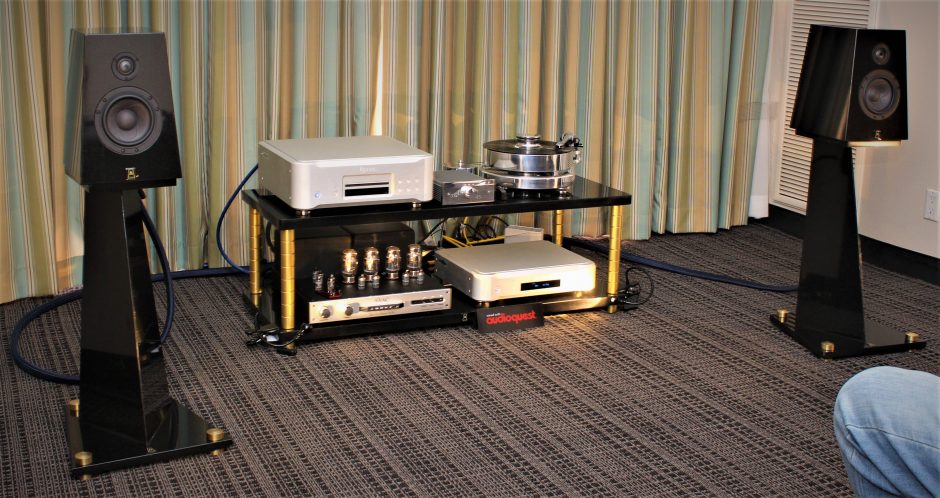 Valerio and Sheree Cora of the Canadian loudspeaker manufacturer Acora Acoustics easily win the award for Best Newcomer of the Year. As I mentioned in my show report, every time I visit their room I fall just a little bit deeper in love with their designs. These sleek, beautiful loudspeakers and their granite enclosures click all the right boxes–great dynamics, fantastic tonality and, most importantly, Acora Acoustics creates speakers that forge a more direct connection to the emotional content in music.

The most exciting thing is that Acora Acoustics had two rooms at FLAX, with different speakers, the stand-mounted SRB ($15,000) and the floor-standing SRC-1 ($28,000) and both models connected with me for completely different reasons. I can easily imagine myself sitting at an Acora dealer and driving the salesman crazy because I can’t decide between the two. That’s quite an accomplishment–excellence across the board, up and down the line. 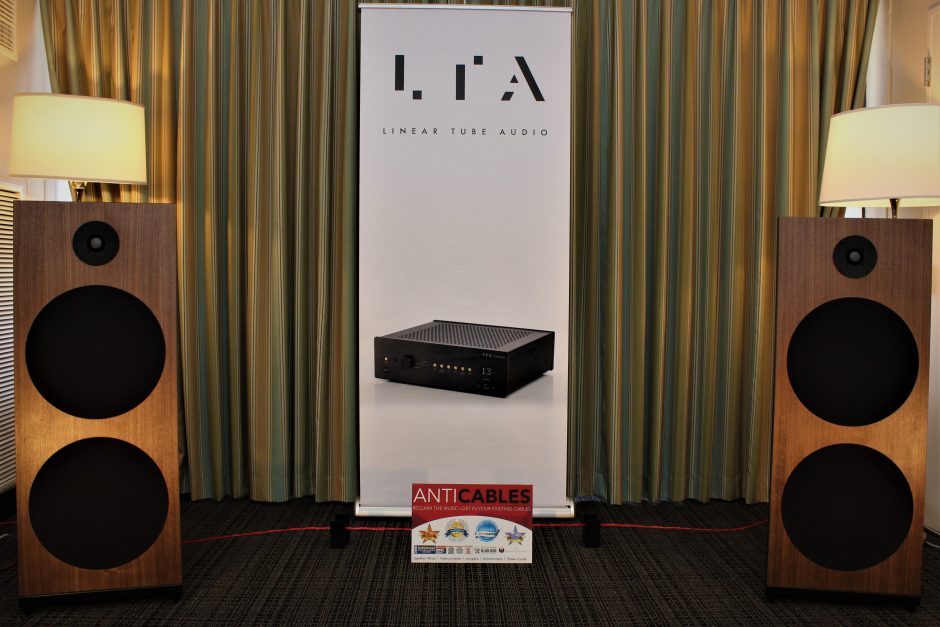 Before I go any further with this room, I have to say LampizatOr. LampizatOr, LampizatOr, LampizatOr. I had a serious brain clog during the show–I kept forgetting to mention that the superb LampizatOr Amber 3 DAC ($2650) was part of the magnificent $10,950 system offered at the show. I’m not sure why I kept forgetting the Amber 3, other than the fact that LampizatOr makes such incredible DACs that I didn’t think it was possible to include it in the cost of this superb, musical system that also includes the LTA Z10 integrated amp and the Spatial Audio M3 Sapphire speakers, all hooked up with ANTICABLES.

I dubbed this greatest way to spend $11,000 in high-end audio, and sure enough some people commented that $11,000 is still a lot of money for an audio system “for most people.” To that I reply, “No! You’re not getting it!” I’m not talking about spending $11,000 on some entry-level system that’s designed to attract newbies. I’m talking about sheer performance, a true taste of high-end audio with few sonic compromises. It’s not “great for the money,” it’s a great system period, one that should cost WAY more than it does. 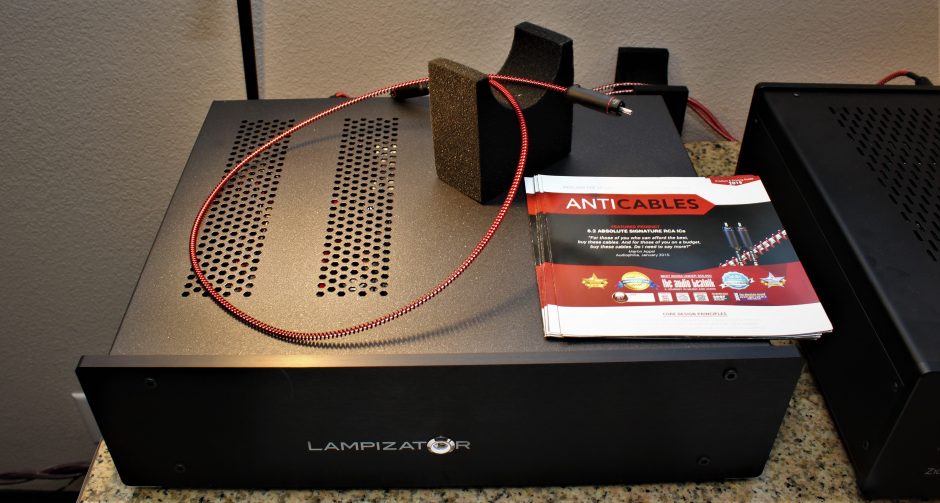 And one more thing: LampizatOr! 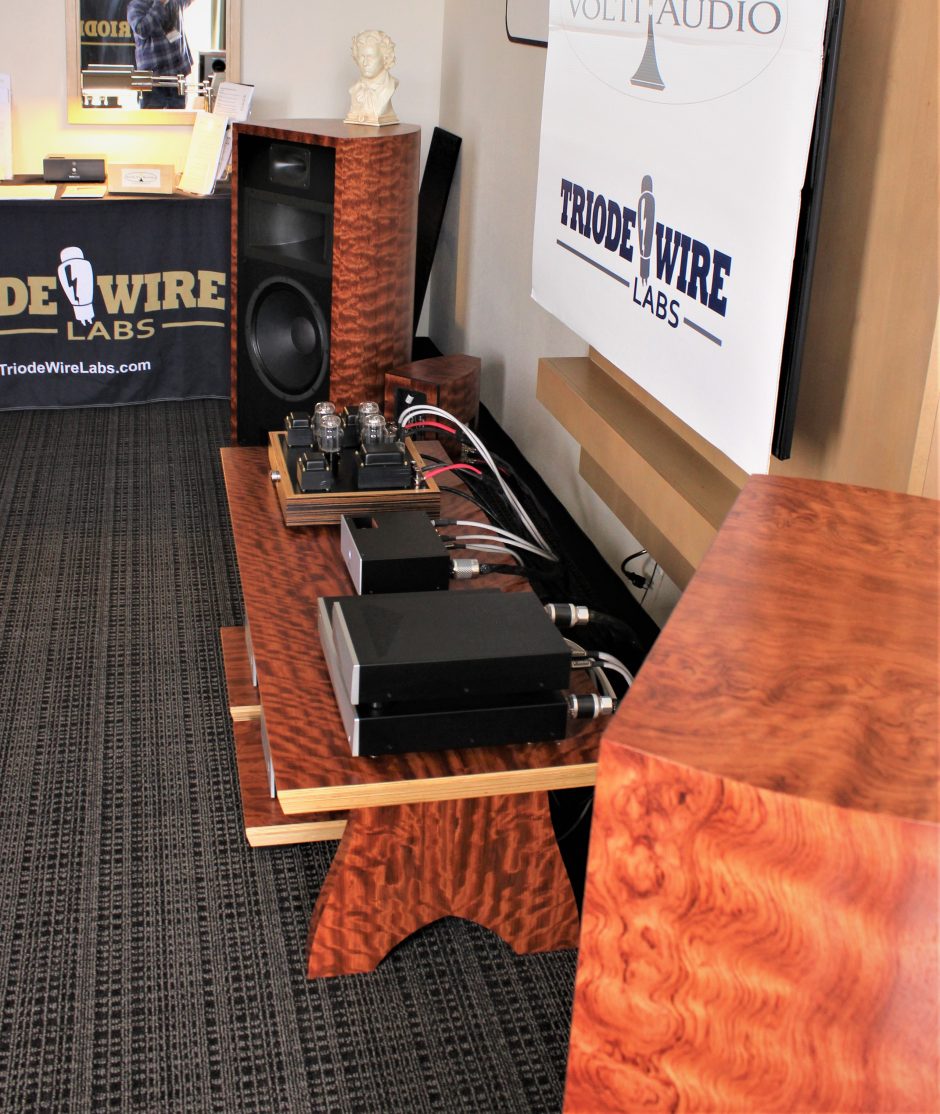 The arrival of the new Volti Audio Rival SE speakers ($19,950/pair) has transformed this room, which is usually one of my favorites, into something that keeps me up at night thinking about the possibilities of ownership. In my show report I mentioned that this room isn’t your typical show room, but rather a listening room for people who just want to enjoy their music, without constraints, with all of their friends and family.

This immersive and powerful system now sounds less ‘”different” from everyone else than it used to, but perhaps it’s closer to the ultimate truth (or TRVTH, whatever that may be to you.) It’s still just as fun as before, maybe the most fun you can have in high-end audio, but I feel that these three companies (let’s not forget the vital contributions of BorderPatrol and Triode Wire Labs for even a second) have turned a corner and now they’ve gotten more serious about really making a statement about who they are and what they can accomplish. This room was amazing, and perhaps the biggest surprise of the show for me. 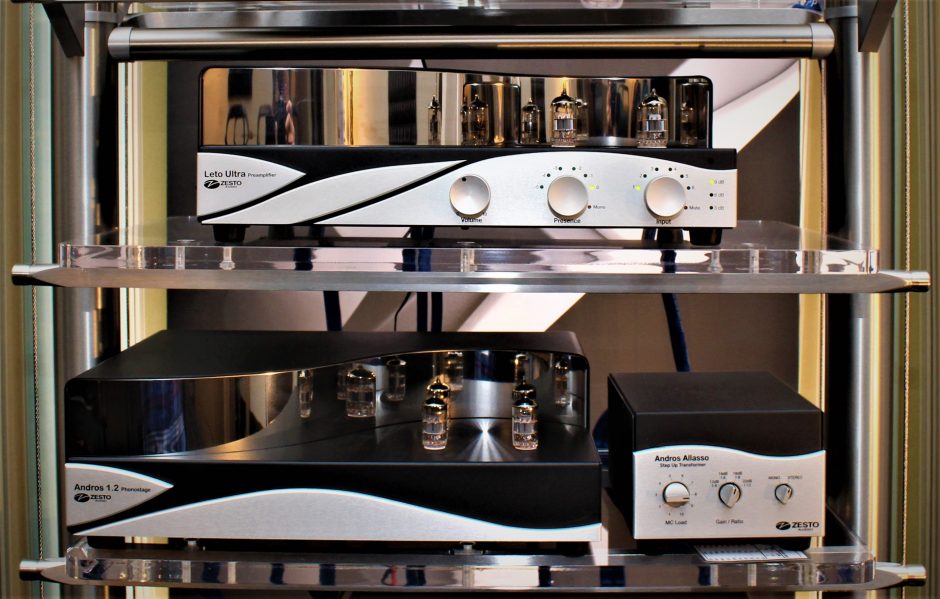 I’ve been talking about Zesto Audio‘s George and Carolyn Counnas for the last year or so, and how they always make me feel welcome in their room. Part of this is the sound of the systems they assemble, which have that same welcoming feeling. Come in, sit down and watch an hour or two fly by. Their tube amplification always sounds glorious and dreamy without losing any of the inner detail and presence in the music. I’ve previously called their room an oasis (apologies to PFO’s David Robinson and his Audio Oasis Awards), because that’s what it is.

The presence of Vimberg loudspeakers in their FLAX room was an added bonus. Tidal Audio and Doug White weren’t in Florida, but that sense of perfection and poise was. Vimberg may be a less opulent Tidal Audio design, but it’s hard to see where the compromises were made. If you need to find a place to get away and find yourself all over, Zesto and Vimberg (and, of course, Cardas Audio) can provide the soundtrack. 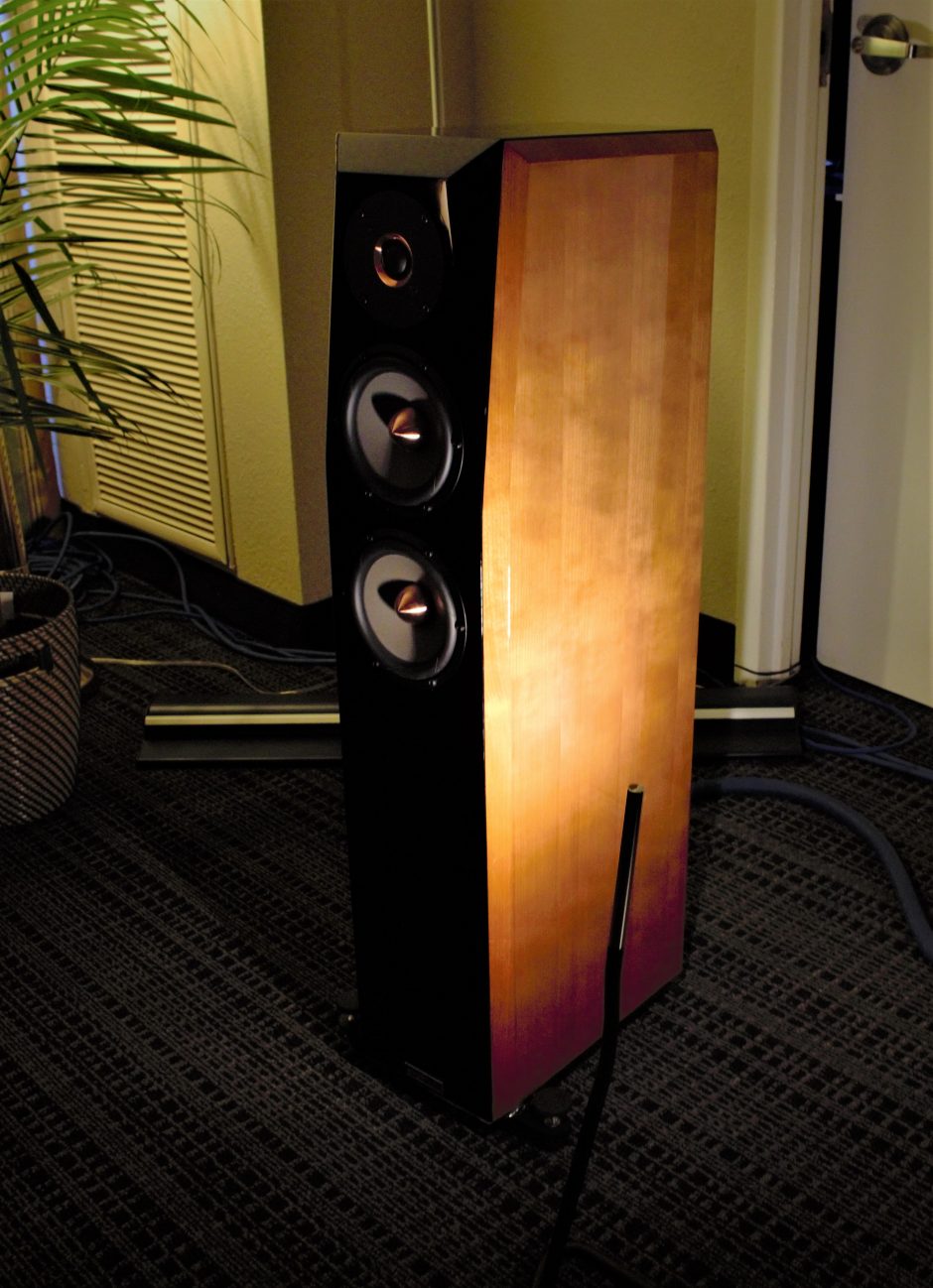 It’s become difficult for me to describe the sound of Joseph Audio loudspeakers, especially when mated to Doshi Audio‘s excellent tube amplification and the same Cardas Audio cabling I’ve been using in my home system for years. I sit down, I listen and everything sounds just like it’s supposed to sound. When I review equipment, I’m trying to get it to sound just like this. It’s my sound. As I mentioned in my show report, it makes me feel like I’m home.

As I also mentioned in the show report, many people have thought it was strange that I’ve never reviewed a pair of Joseph Audio speakers. Well, Jeff Joseph and I have rectified that situation and soon I will receive a pair of Joseph Audio Pulsar Graphenes, the lone model in the line-up I haven’t heard. (I’ve heard the older version of the Pulsars countless times and think they’re one of the finest 2-way monitors ever designed.) Jeff simply told me, “You’ll love em.” I can’t wait for them to show up. 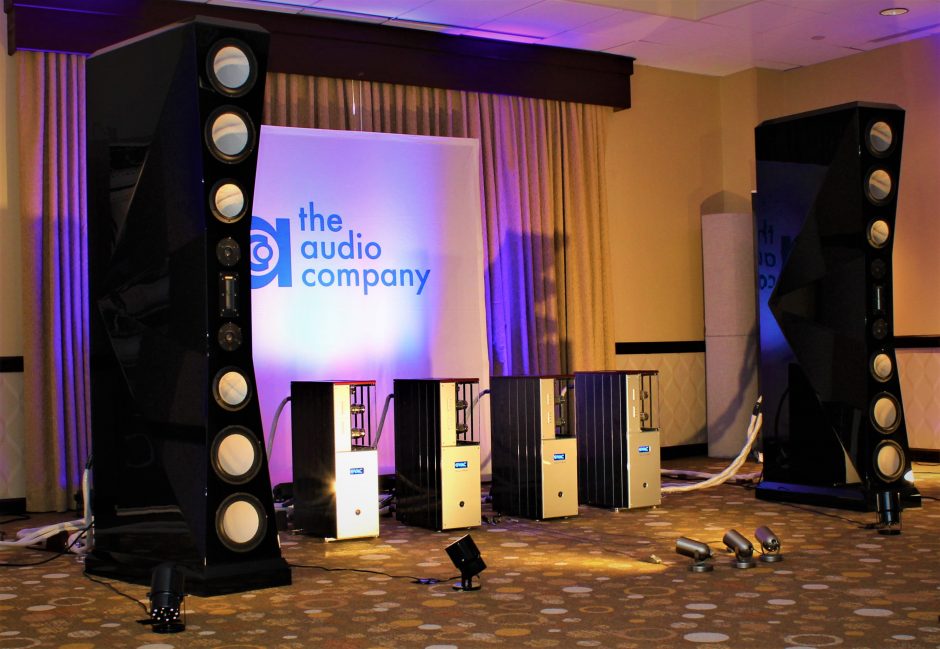 It’s even more difficult for me to spill more words onto the page for the VSA/VAC exhibit rooms because there’s only so many ways you can say something is the best you’ve ever experienced. So instead of me blabbing on and on about this extraordinary $1.5 million system one more time, I’ll simply give you a link to a Facebook post recently written by Lukasz Fikus of LamipzatOr, which you can read here. There’s nothing I can add to these sentiments, other than thanks to Leif Swanson, Damon Von Schweikert, Kevin Hayes and everyone else involved for bringing this supreme audio experience to people all over the world.

That’s it! Next stop for me, AXPONA in April! 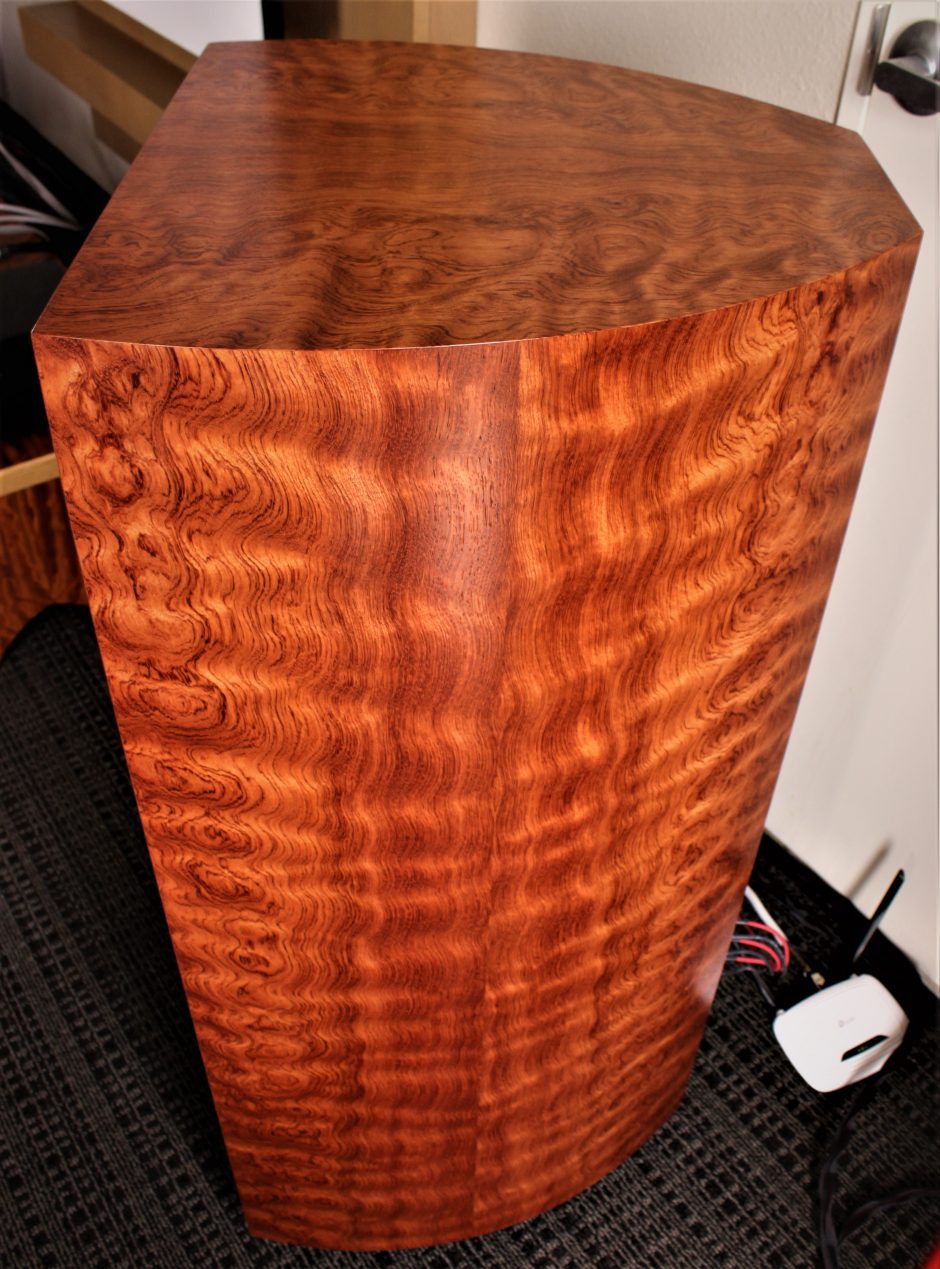 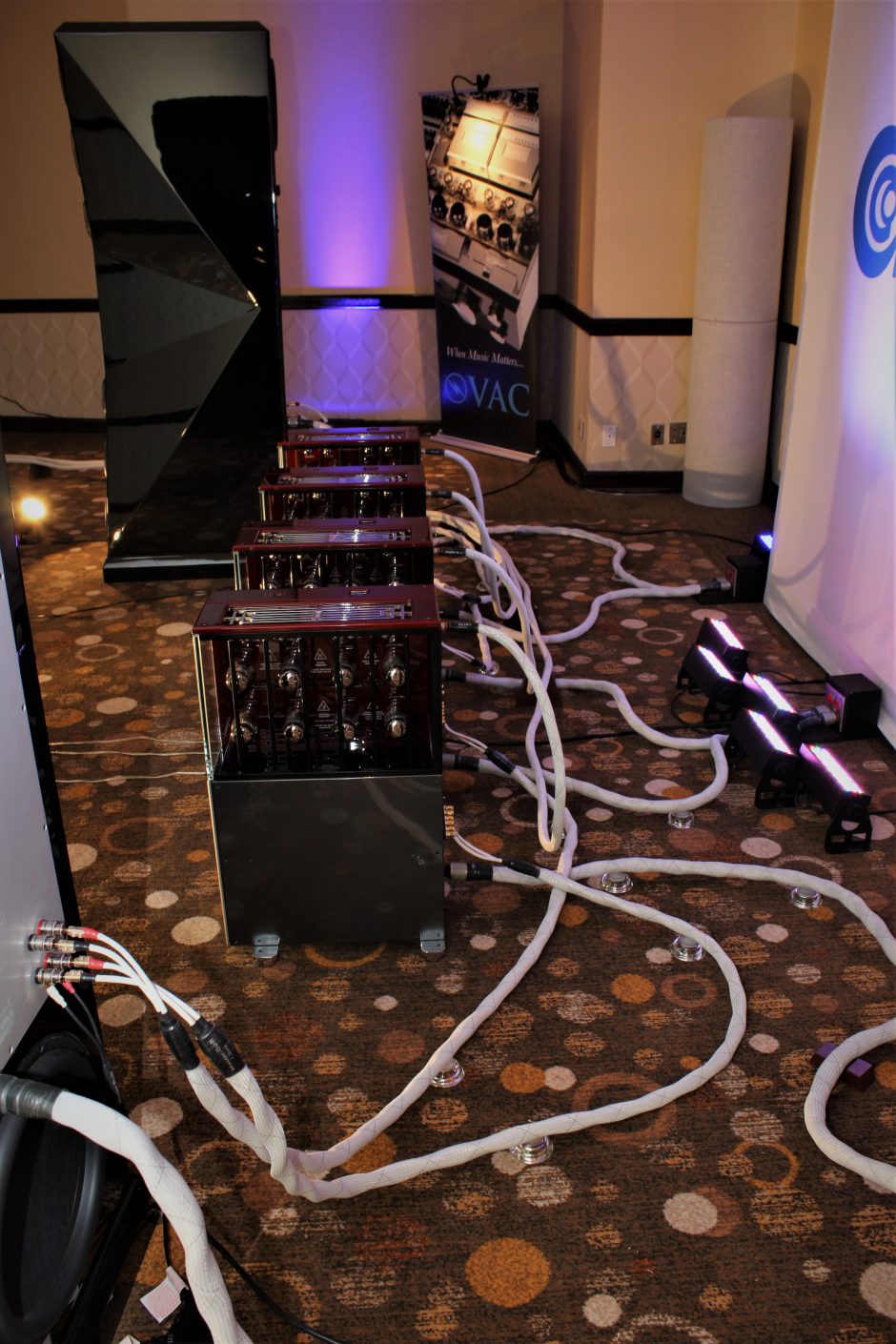 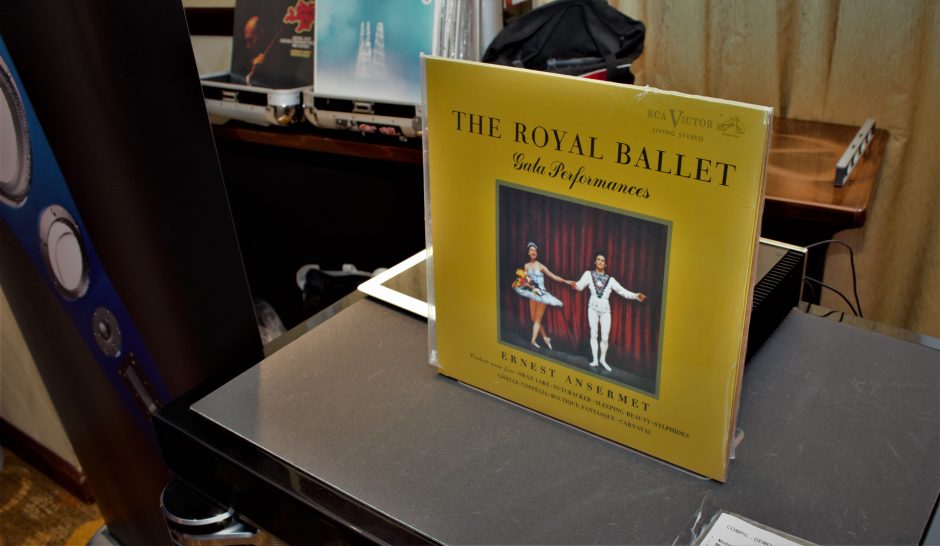 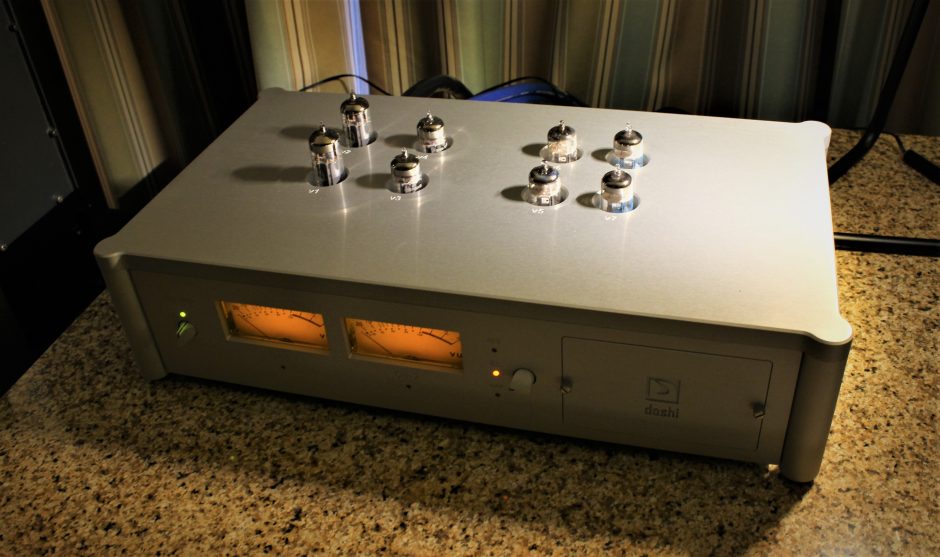 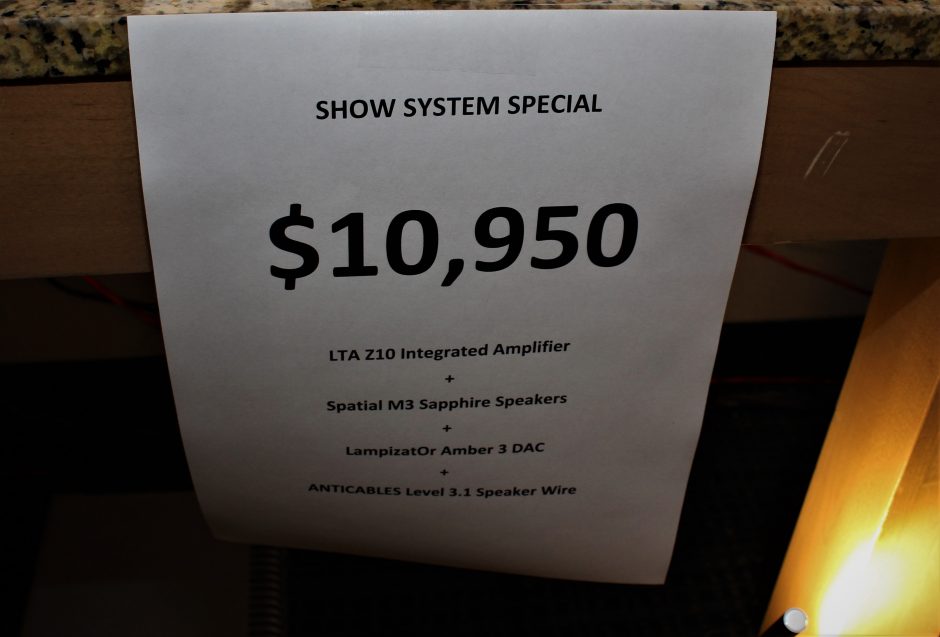 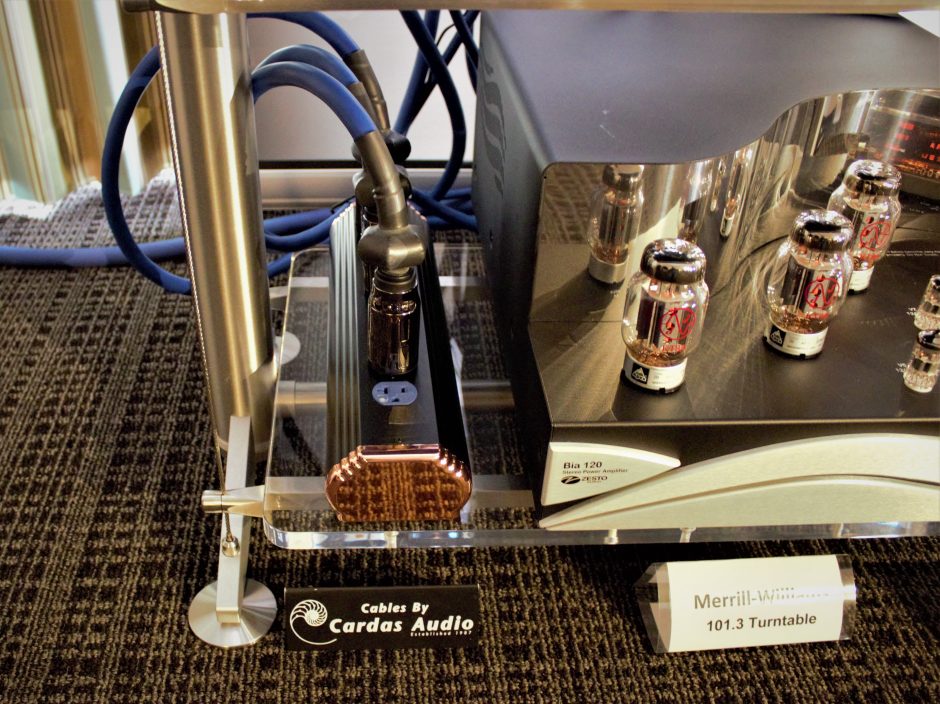 Let’s talk about the Passion Of St. Bernard. No, not the dog. No, not Bernard of Clairvaux (1090-1153), the Benedictine monk–although he was no doubt passionate about his stuff. I’m talking about the founder, and […]

Fast becoming one the best pairings we’ve heard are the Salk Sound speakers, with the McGary Audio tube amplifiers and Anticables cables (still an odd name for a cable company, but I like it). Salk […]