It takes a brave soul to review high-end audio cables, it seems, even something as worthy as the Raven Audio Soniquil series. Many high-end audio publications no longer review cables—not because there aren’t obvious differences between cable brands, but because no one wants to deal with the fallout, the nasty comments from readers who say there are no differences, the instant challenges to controlled A/B comparisons since no reviewer has ever been able to pass that test–so they say.

Inside the industry, away from internet comment sections, it’s a different world. We openly declare that we hear obvious differences. We do have clearly stated preferences and opinions. In the last few months, for example, I’ve had three manufacturers ask me to review their products, either speakers or amplifiers, with a specific brand of cable. While those nay-sayers in the forums will tell you that’s because some deal was made between the two companies, I know that in most cases it’s because the amplifier/loudspeaker was voiced with a certain cable or because the manufacturer tried a certain cable and said, “Wow, my stuff sounds fabulous with this!”

Would I like to review some cables from Raven Audio?

Absolutely, and for a number of reasons. First, I’m not afraid of taking an A/B challenge as long as the protocols are properly formulated. That’s one of the reasons no one has been “able to pass the test”—because it’s usually a hot mess. Secondly, I’ve been comparing cables for a long time. I have a mountain of cables from various brands, and I can swap out cables at will to draw out differences in a system. I do it all the time.

I know that in order to hear differences between cables, you have to do at least two things. You have to have a system that’s resolving enough to reveal those sonic differences. I’ve heard many skeptical audiophiles say things like “I tried expensive cables with my mid-fi system and heard nothing.” Hurr. You also need to rewire the system with a complete loom* of cables from the same brand for the best results. Again, I’ve listened to the guy who told me that he threw a single $500 power cord into his $800 system and again heard no improvement. Again, hurr.

I quickly said yes when Scot Hull handed me a box filled with Raven Audio Soniquil cables—power cords, interconnects, speaker cables. I’m not afraid of internet trolls, because I was one for many years. To paraphrase Rorschach, I’m not in here with you. You’re in here with me.

Raven Audio and I go way back, back to my days living in Texas. I first discovered the brand at the Lone Star Audio Fest, which is held every May in Dallas. If you’ve ever attended LSAF, you’ll know it’s quite different from RMAF or AXPONA or Capital Audiofest. It’s a small regional show, featuring a lot of local hobbyists who are revealing their designs to a close-knit group of friends. It’s mostly DIY—in many cases you buy a set of schematics, not a finished product.

Raven Audio always stood out from the crowd at LSAF, the proverbial big fish in a little puddle. They’d be exhibiting in the largest room at the show, a downstairs conference room, and they’d bring at least one of everything they made. Raven Audio is known for their tube amplification—it’s beautiful stuff and it sounds really good. In the modest environs of LSAF, the dimly-lit Raven Audio room will take your breath away with all the glowing tubes and gleaming surfaces. 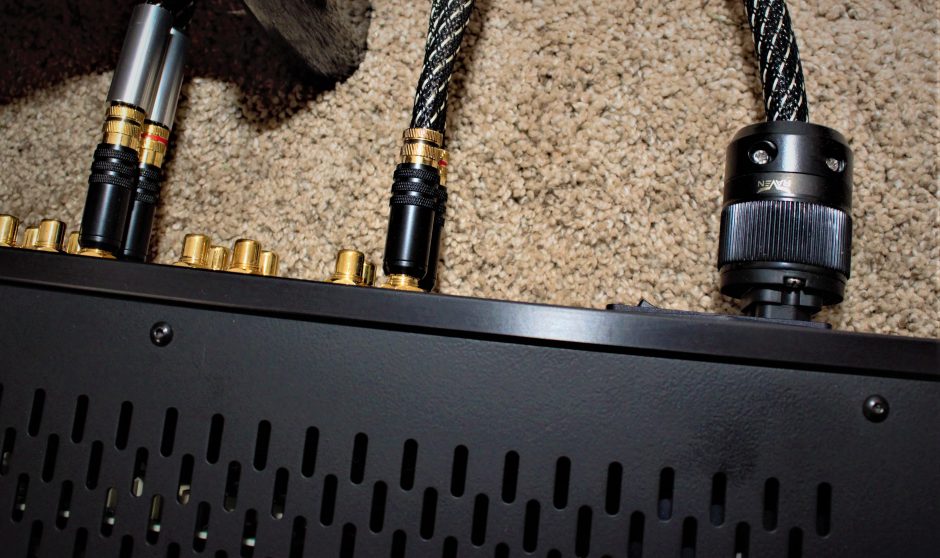 As Raven Audio grew and started making appearances at the big high-end audio shows, I felt a vague sense of pride, sort of like “hometown boy makes good.” Still, I wondered why Raven Audio decided to start manufacturing cables. Based on my previous points above, I assumed that their cables would be voiced with their amps, so when a client asks what type of cables they should use with a newly purchased Avian Nighthawk Mk. 3 integrated amplifier or a pair of Spirit 300B Mk. 2 monoblocks, the folks at Raven can say “oh, these right here!”

I have a confession to make. I didn’t know the price of Raven Audio Soniquil speaker cables, interconnects and power cords until I was almost done with the review. Raven Audio amplifiers aren’t cheap—they start at $3000 for the Avian Nighthawk and go to $50,000 pair for the Shaman Mk. 2 monoblocks. The fit and finish of the Soniquil cables is high—the jackets are beautiful and the connectors are of very high quality. I went through the review period thinking these were fairly expensive cables.

After several weeks of testing, I decided to check out the price of the Raven Audio Soniquil cables on their website. The RCA interconnects cost $99-$169/pair, depending on length. The XLR interconnects cost $119-$189. The speaker cables cost $149-$219/pair. The power cords run from $149 to $199. In the world of high-end audio, that’s a cough. 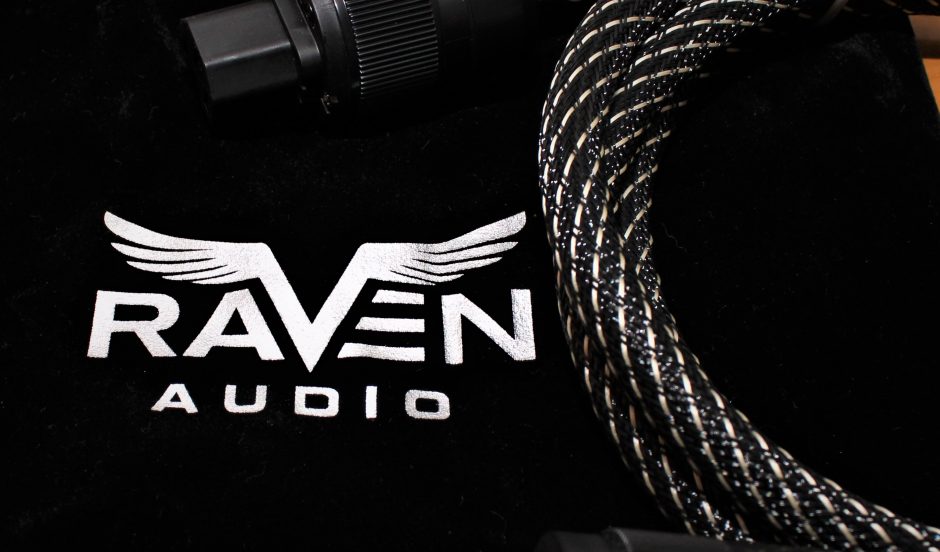 I first used the Raven Audio Soniquil cables in my new office system, which has been designated as my “break-in” system. I had a lot of gear to review over the winter, and the only thing that made sense was to set-up a separate system in another room—my office—and allow everything to settle in. Once there was room in the reference system, I’d move the review piece in. It’s one of the best ideas I’ve had in a long time.

What I didn’t expect was that the break-in system would sound so good. My office turned out to be a great-sounding room, and I had plenty of space to spread components and position speakers for the best sound quality. This second room system is now a permanent fixture in my home, and I spend a lot of time listening to it.

The loom of Raven Audio Soniquil was there from the beginning. The first break-in system consisted of the Bryston B135³ integrated amplifier, the Martin Logan 35XTi loudspeakers with the Dynamo 800 subwoofer and my trusty Unison Research CDE CD player. (Everything was plugged into the AudioQuest Niagara 1200 power condition I have in for review.) I was impressed by the deep soundstage of the system, as well as the clarity of the lowest frequencies. 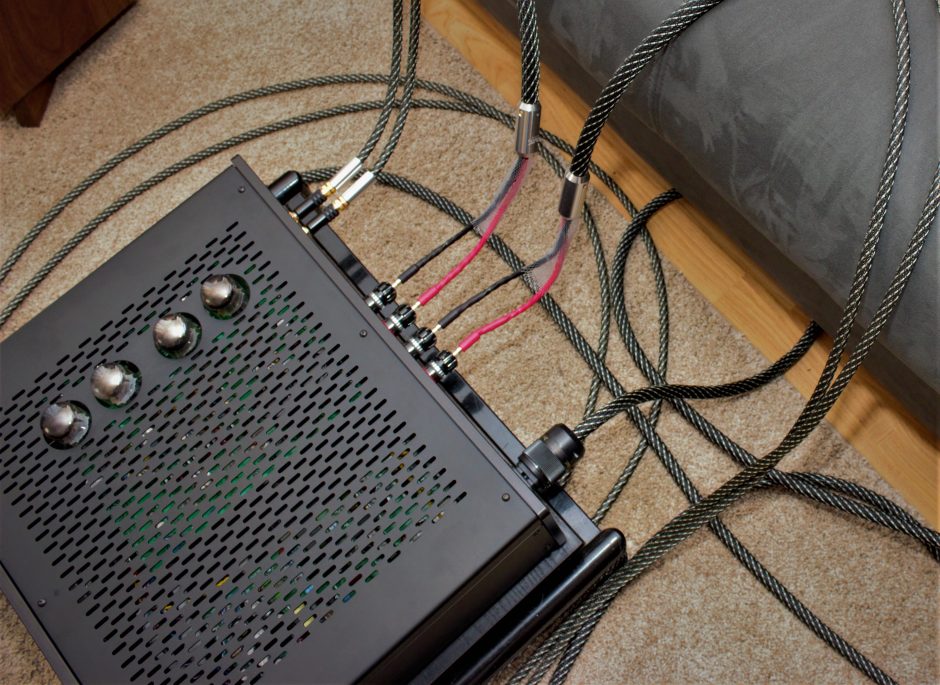 Then I swapped out the Bryston and the Martin Logans and upped the ante to the Fern & Roby Raven II loudspeakers and the Linear Tube Audio Zotl 40 power amplifier and Microzotl preamplifier. Here I noticed the sublime tonality of the Fern & Roby/LTA combination, and the brilliant way the Raven IIs preserved those tones off-axis. With both systems, the Raven Audio Soniquil cables happily did their jobs by staying out of the way of these stunning components. That didn’t tell me a lot about the Raven Audio cables by this point, however, other than they didn’t screw anything up. I needed to compare the Soniquil line with the other cable looms I had on hand. That meant it was time to move the Raven Audio cables to the main system.

Was I setting the Raven Audio Soniquil cables up for failure? 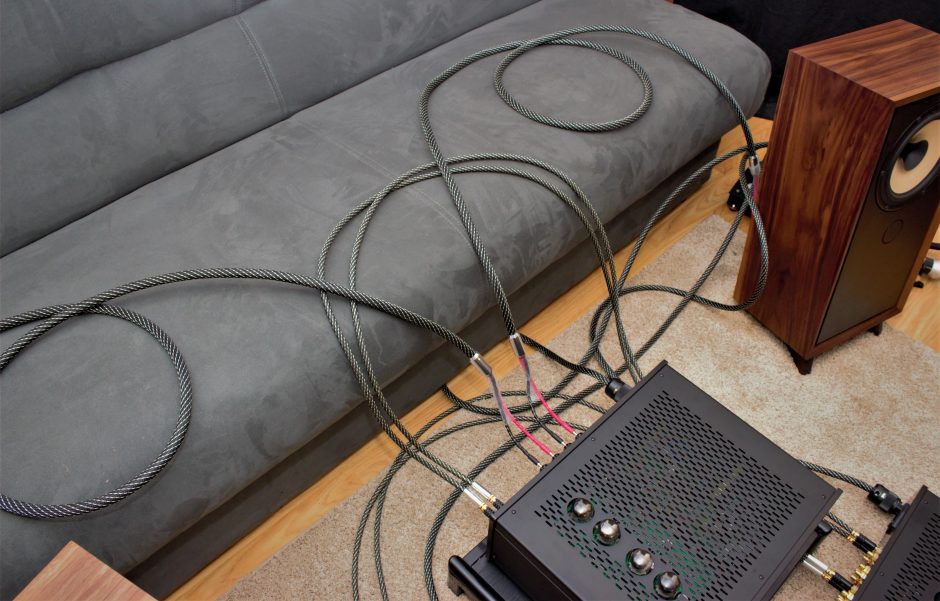 Well, let’s be honest. There was a remarkable difference between the sound of Raven Audio cables and the expensive stuff. That’s one A/B challenge I’ll be glad to accept. I heard significant differences in soundstage size and the noise floor. I heard more detail and more space between performers.

But here’s what didn’t happen—the sound of the big system didn’t fall apart with the Raven Audio cables. At no point did I experience despair, screaming “Please take these inexpensive cables away!” The Soniquil loom’s strength was preserving tonality. As I experienced with the LTA/Fern & Roby break-in set-up, tone was king. Instruments sounded realistic and authentic. Voices hung in mid-air.

Best of all, the Raven Audio cables excelled at both imaging and in deep bass performance. I never felt a need for more bass in the room—it was always taut and fully fleshed-out. The impact of Tony Levin’s Chapman Stick in Paula Cole’s “This Fire” and the first few bass drum whacks in Dead Can Dance’s “Yulunga”—two of my favorite test tracks for deep bass—sounded almost exactly the same as with the more expensive cables.

Over time, I stopped think about comparisons between Raven Audio Soniquil cables and my usual reference cabling. I just relaxed and enjoyed music. 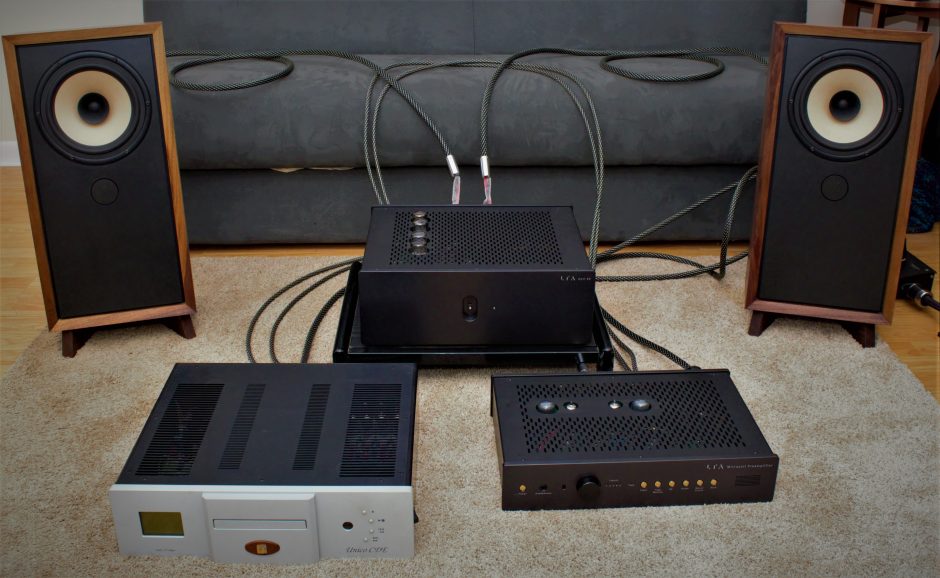 For a variety of reasons, I’m swimming in cables. All kinds of cables. Need a specific cable? Let me check. I’m sure I have it.

That wasn’t always the case. I remember a time when I really needed some quality cables at a reasonable price. I always had ultra-cheap options around such as Radio Shack, Belden, Blue Jeans, Monster and more. I also had plenty of gear that needed more than that. I would have leaped at the chance to buy something like Raven Audio Soniquil cables.

Think about it. If you have the kind of basic set-up I always had as a journeyman audiophile—integrated amplifier, CD player, turntable and speakers—you’re talking about $500 for a complete loom. I look at the loom in my reference system and I think, “I could buy a new car for this kind of money.”

Maybe I’m placating those internet skeptics by saying that there’s a line of cables that are well-made, attractive, affordable and sound good. That’s easier to state than telling y’all I tried a pair of $50K speaker cables that changed my life, and you’ll never know true happiness until you re-fi your home and buy a pair.

Since Raven Audio offers a 45-day risk-free home trial, it’s easy to find out if they’re perfect for you. 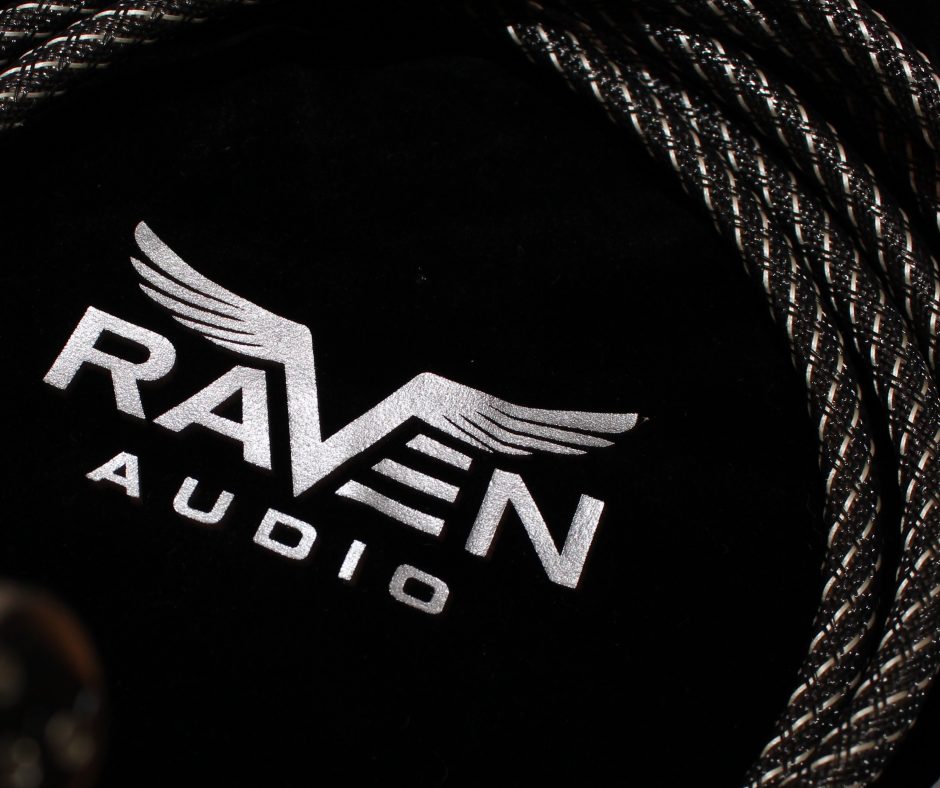 by John Richardson You’d almost have to be labeled an old-fashioned Evil Pinkie Communist (think Boris and Natasha from the Bullwinkle cartoons…) not to like and admire what the folks at Shinola are doing. At […]

Brodmann Acoustics was showing off several speakers at the show over the weekend, paired with some wonderful gear from Electrocompaniet. But unfortunately for me, I can’t find the sheet of notes that talked about them. […]