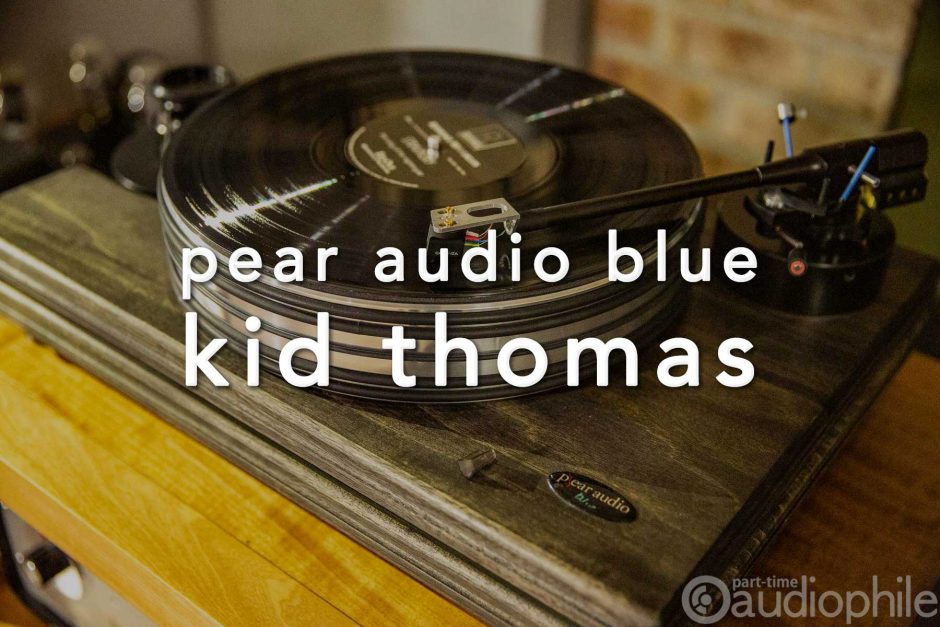 The Pear Audio Kid Thomas turntable I had in for review came to me by way of Dr. Vinyl, a local audio dealer, and Audio Skies, the US importer for Pear. I had seen this turntable at a variety of audio shows, and almost always paired with some exquisite speakers and electronics from GamuT. In the spirit of full disclosure, those demos have always been among my favorites. So, when it came time to go shopping for a new, upscale, and modestly unaffordable turntable, this was one of the first places I turned. And, if I’m being honest, the fact that my friend Michael Fremer had given it a “Class A” rating a few years back weighed more than a little in my decision to bring it in.

If you’ve never seen one of these turntables, visually, it’s no-frills and kinda plain — your money is certainly not going into frivolous bling. At least, that’s what the Pear Audio Blue “puffy” logo sticker on the plinth says to me. The plinth itself is a sturdy wood, has a satin finish, and is stained an understated, and almost vintage-looking, greyish-brown. The wood is also soft, so have a care, and while the cut/fit is beyond reproach, it does fall a bit short of the simple-but-elegant casework on, say, a Kuzma Stabi R. The Kid Thomas has a dual plinth, separated from each other by some Sorbothane for isolation. The arm-mounting and outboard motor are of a dense, matte, Delrin-like POM material — they look and feel very well-made, but do not stand out in any way or at any distance. 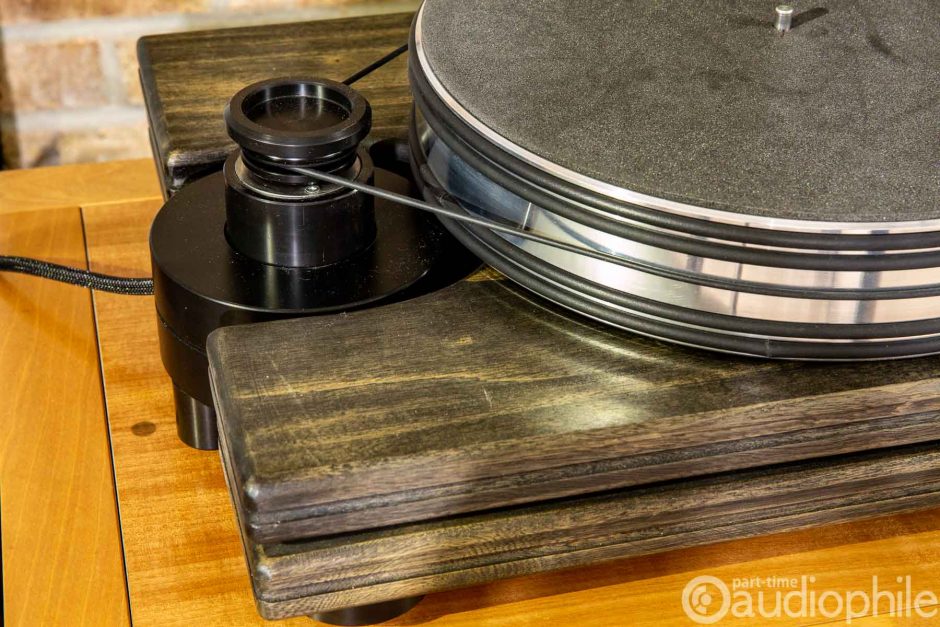 Perhaps it’s a good thing that I noticed none of that when I got up close and personal. Really, what fairly leapt out at me was that massive 25lb aluminum platter, wrapped (damped) with a series of rubber o-rings. That’s a big hunk o’ metal.

The platter as the “visual grab” makes a sort of sense to me, especially given that the history of this belt-drive design flows directly out of Nottingham Audio — so, yes, you do have to spin this platter by hand in order for the low-torque motor to “catch up” to the platter and stabilize its speed, and then maintain that speed for playback. It’s kinda retro-cool, but this low-torque, high-mass design really shines. Once up to speed, at least theoretically, it’s a small and simple matter to keep that speed stable. In practice, it appears to work a treat. Oh, and the other end of that — “braking” — that is, stopping the record spin? Also by hand. I should probably confess at this point that this is all deliciously low tech in an oddly satisfying “I’m doing something” sort of way. Take that, digital playback!

My demo came with the optional outboard motor controller, housed in a black plastic case, which can spin the platter up and down for 33/45 switching (but the platter might need a hand to “get there”, LOL). A wall-wart is standard, I believe.

My demo unit came standard with a Pear Audio Blue Cornet 2 tonearm. I did not review the arm in any special way (that is, swap it out for another), but instead, reviewed the turntable and arm “as a package”, which is the way that the vast majority of buyers apparently acquire them.

On that arm, I chose to mount my reference-grade Windfeld cartridge from Ortofon. Other supporting analog gear game from the excellent (but now discontinued) TW Acustic Raven Phono made by Thöress.

Setup was performed by the expert and charming personage of Jose Ramirez of Dr. Vinyl. 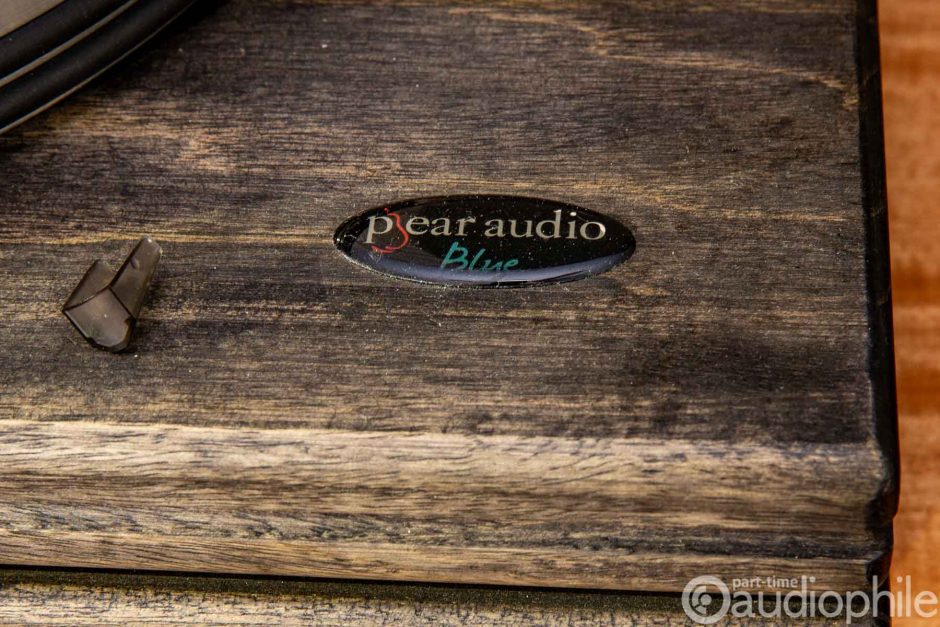 I’m embarrassed to say that Mikey got it right. Okay, not embarrassed “that” he got it right — Mr. Fremer is a legend — but that he completely nailed it. My notes, after playing some audiophile standards (Kind of Blue by Miles Davis, and The Moonlight Sessions, Vol. 1 by Lyn Stanley), I wrote “rich and creamy”. And then underlined it. Twice. The embarrassing part? That’s apparently the exact same thing Mikey wrote the first time he sat down to listen, too. Sigh. This is not the first time I’ve discovered exactly how derivative I am. Whatever. What can I say? That’s science for you. Totally replicable.

In fairness, with a different cartridge, I’m sure that the Pear Audio Blue Kid Thomas would produce an entirely different experience. My old Windfeld is neutral to a fault, and I think that this balanced very deftly with the natural midrange lushness I was getting out of Kid Thomas experience. With a more lush cartridge, like a Koetsu say, my suspicion is that this would get to be a “too much of a good thing” situation, posthaste. I fully expect your mileage to vary.

Some other notes. Mikey notes that the bass was not “the last word”, and while I’m not going to quibble here with my friend, I will offer that my experience made me wonder what he was might have been missing. On deep-bass cuts (Pure Heroine, by Lorde, for example), I heard nothing to complain about, and my Volti Audio Rivals were fully able to alarm small animals and compress my digestive tract. Relapsing into intuition, I suppose my friend could be referring to the sense of drive that direct-drive turntables (like the excellent Technics turntable we reviewed in The Occasional Magazine last summer, or what other high-torque motor designs can wring from their platters), but I wouldn’t swear to any sense of “falling short”. Seriously. Bass was “on”.

On the other end of the spectrum (with, say, brass decays on the opening sequence in “Fanfare” from Copland), I will agree with The Expert — while the sound was eerie, natural, and hair raising with sparkle a-plenty, I have heard more extension and more air. I’m reminded of my twice-as-expensive TW Acustic Raven AC-3 turntable here. But don’t get carried away, this is mole-hill (not mountain) stuff.

Where things got gobsmackingly great was right where you want them to be great, and oh-my-goodness but human voices are just lovely off of the Kid Thomas turntable. The general effect reminds me of my reaction to the Living Voice Avatar OBX-RW loudspeakers, if you’ll pardon the modality-switch, which may well be the best mid-range speakers I’ve ever heard. And by “best”, I mean, “climb into your lap and lick your neck” kind of good. Seriously. You’re going to need a wash after those sessions. And this is where the Pear Audio Blue Kid Thomas plays — you’re going to have serious problems staying still while listening. It’s like getting washed. By hand. Slowly. … And now I need a bath. Gah.

The Pear Audio Blue Kid Thomas is an excellent-sounding turntable. In fact, it’s one of the best I’ve heard at any price. It’s very easy to use and will routinely astonish. I see no reason to not get the “matching” Cornet tonearm, and while I did not swap a different one in or out — this was a dealer loaner, and not something I was going to muck about with much because I didn’t want to hurt it — the overall sound was so good that trusting the manufacturer with pairing seems perfectly reasonable.

As I noted, this is not the most elegant-looking turntable, and at almost $10k for the turntable and tonearm, that’ was my biggest disappointment. The Kuzma Stabi R that I mentioned above is about the same price, and visually speaking, it competes favorably with a new-vintage aesthetic.

But in the same way that the 300b vacuum tube may well be the “King of All Vacuum Tubes” (fight me), I think that the Pear Audio Blue Kid Thomas just has that certain je ne sais quois that the 300b has, too. It’s rich. It’s creamy. It’s magical. It’s love. And yes, I love the sound of the Kid Thomas. If you’re looking for reference-grade sound with a healthy dose of nostalgia and user-interactivity, then I highly recommend an audition. 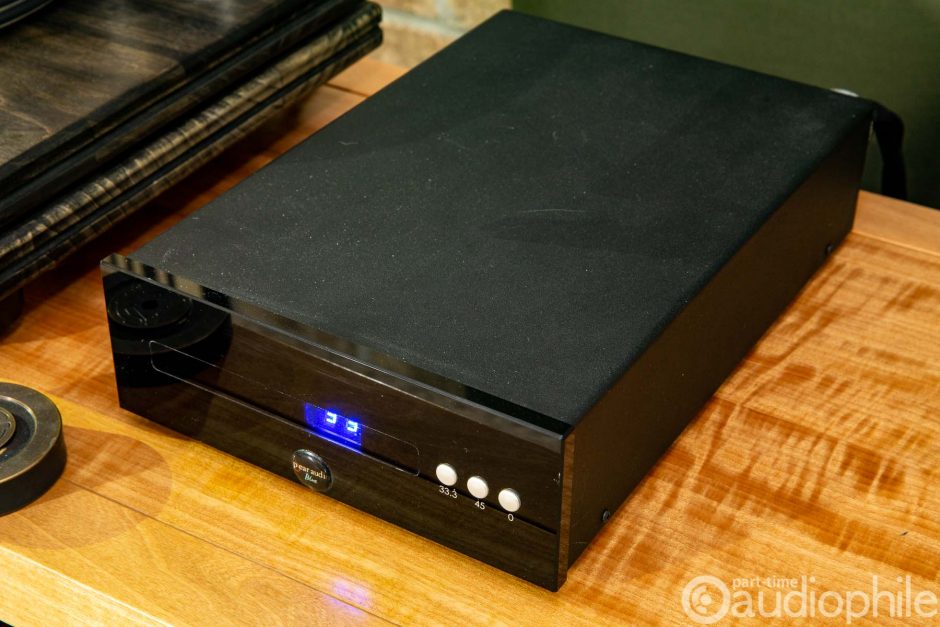 Do you want the hernia or the double hernia? The voice on the phone asking that question was Bryan Stanton, a communications specialist who works with Pass Labs. A few weeks prior, we had begun […]

Fans of Part-Time Audiophile will recall my (on going) love affair with the Polish DAC wonder called LampizatOr. Just to recall some of my highlights — once upon a time, I met up with the PCM-only […]

LOS ANGELES (PTA) — Alaia (“ah-lye-a”) is the Hawaiian word given the wooden surfboards originally used by the Hawaiians in the 19th century. Alaia Audio in partnership with LKV Research electronics, made their world debut […]