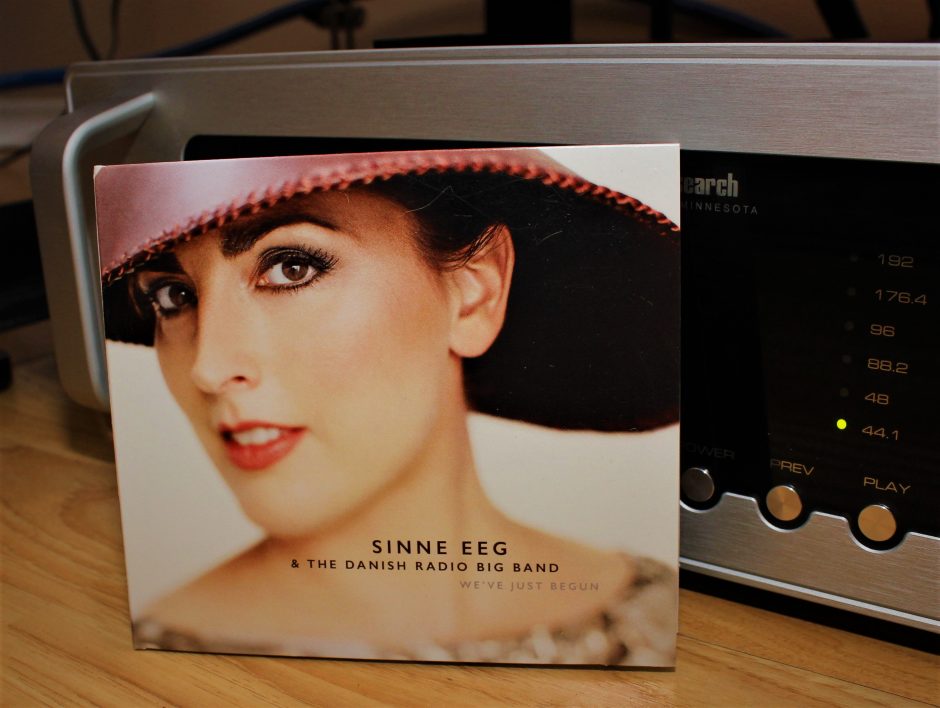 I’m still struggling with my approach to big band jazz lately, and how to search for the recordings that will truly engage me. A couple of years ago I dove in head first, and perhaps drifted so deep under the surface that it all just started sounding big and dynamic and punchy–my three favorite adjectives for big band jazz–without having the substance I needed to continue the journey. In other words, about three-quarters of these contemporary performances sound the same to these ears. Sinne Eeg, a Danish jazz singer, has reminded me of what I really desire from big band jazz in her latest album, We’ve Just Begun.

While reviewing several big band recordings featuring the excellent WDR Big Band from Germany, I’ve discovered that these ensembles can be far more innovative than their American counterparts, who are still steeped in tradition and generally careful to adhere to a code that celebrates precision and perfection. The Danish Radio Big Band, like the WDR, knows how to sound precise without also sounding stiff and unwilling to have fun. Sinne Eeg has this smoky, alluring voice that grabs you gently by the earlobe and guides you around the room in an enchanting slow dance. The DRBB, led by conductor Nikolai Bogelund, not only knows how to step out of Eeg’s way, but the band can also heighten that sense of seduction in the same way as a skilled film soundtrack without being manipulative.

What makes Sinne Eeg even more compelling in We’ve Just Begun is her taste in music. She’s not content to rely upon the Great American Songbook, something that is all too common when you assemble this many musicians in a studio. There are just three standards–“My Favorite Things,” “Detour Ahead” and “Comes Love”–and with the exception of “a swinging adaptation of a tune from a vintage Danish film” named “Hvor Er Lykken Sa Lunefuld,” it’s the remaining originals where Sinne Eeg is either the composer or lyricist that brings out the emotions.

That’s what gives this album such a personal feel–Eeg isn’t just another female voice trying to get noticed in a very crowded field. Three separate arrangers–Jesper Riis, Peter Jensen and Roger Neumann–help her to keep each track unique while maintaining a steady energy from beginning to end. It’s Sinne Eeg and her voice that will ultimately hold your interest, however–her tone is casual, even conversational, but it grabs your attention because she’s talking to you and no one else. That’s something that quite a few jazz singers forget to do, especially when they’re surrounded by so many other performers on the stage.

When I first heard The Sphynx from jazz violinist Jonathan Ng, I thought someone had thrown the wrong CD into the case before mailing it off to me. You look at the cover, and then […]

The Sumiko Celebration 40 moving-coil phono cartridge entered the stable during a very busy time for analog at my place. I’ve plenty of phono preamps and step-up transformers and cartridges in for review, and we’re […]