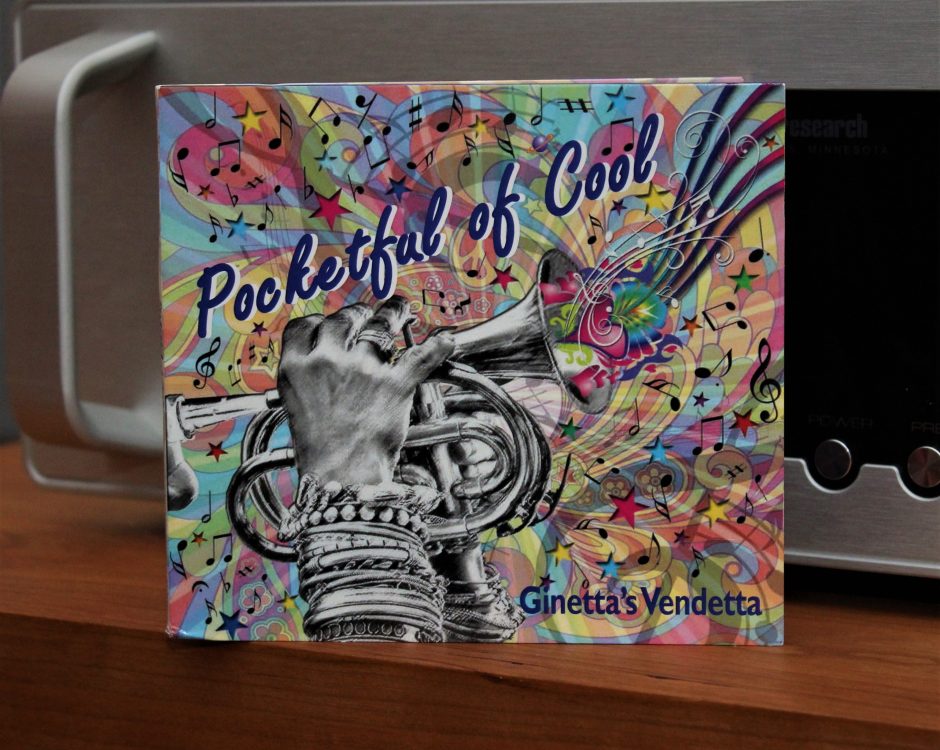 Just last week I was discussing the flugelhorn, and how I was considering this mellow cousin of the trumpet as the next musical instrument I’d like to learn. After listening to Ginetta’s Vendetta and their new album Pocketful of Cool, I might have a new candidate–the pocket trumpet. Ginetta Vendetta–that’s her name, and Ginetta’s Vendetta is the name of her quintet–has been playing the pocket trumpet for many years in addition to singing and composing. When I listened to Pocketful of Cool for the first time, I was expecting a “toy” version of the trumpet, a sound that is perhaps higher and lighter. If you know anything about pocket trumpets, you’ll know that’s just not the case.

The pocket trumpet plays the same range as the trumpet, and if you straightened it out it would measure the same. The idea of the pocket trumpet is one of convenience, that it’s easier to carry around when you need an impromptu practice session. It’s considered a bit of a novelty, and not something you’d pull out on stage, although Don Cherry used to do it occasionally. Ginetta’s Vendetta takes the opposite approach–Vendetta herself likes to say that “with my horn as my passport, there is no place I cannot go.” It just doesn’t take up that much room in a suitcase.

On Pocketful of Cool, the listener is tempted to listen to the different tone of the pocket trumpet. I couldn’t do it, although I assume someone more familiar with brass instruments could. Vendetta plays the heck out of hers, and her fellow musicians–tenor sax player Danny Walsh, pianist Jon Davis, bassist Belden Bullock and drummer Eric Halvorson–perform these standards in that ultra-cool, swinging manner you’d find in a nightclub right before last call. In other words, Ginetta’s Vendetta doesn’t play cool jazz. They are cool cats who play jazz, if you know what I mean, songs like “Fever,” “Work Song” and “My Little Suede Shoes.”

Ultimately, the focus of Pocketful of Cool and Ginetta’s Vendetta in general isn’t the pocket trumpet at all–it simply stops mattering because it’s all about Vendetta’s talents, her husky and bluesy singing style and the supreme talent of this quintet as a whole. Perhaps it’s a vital tool to get the pocket trumpet some respect in the world of jazz–from this album, I see no reason why it would be considered an instrument that shouldn’t be taken seriously. This is both a fun and enlightening album.

The Sam Chase & The Untraditional, The Last Rites of Dallas Pistol | The Vinyl Anachronist

The Sam Chase & the Untraditional‘s new 2-LP release, The Last Rites of Dallas Pistol, is so unique that it might create its own musical genre–arena Americana, epic western folklore or panoramic country. This is […]

Samoa Wilson and Jim Kweskin, I Just Want to Be Horizontal | The Vinyl Anachronist

Samoa Wilson reminds me a little of the Occaquan Inn in Virginia, one of my favorite restaurants in the world. The Occaquan Inn, which is located right on the bank of the Potomac, has a […]

Back to the Garden from Judy Wexler | The Vinyl Anachronist

When you talk about contemporary jazz in the United States, you’ll probably be talking about New York City at some point. No matter where you’re from, you’re probably headed there to pay your dues and […]