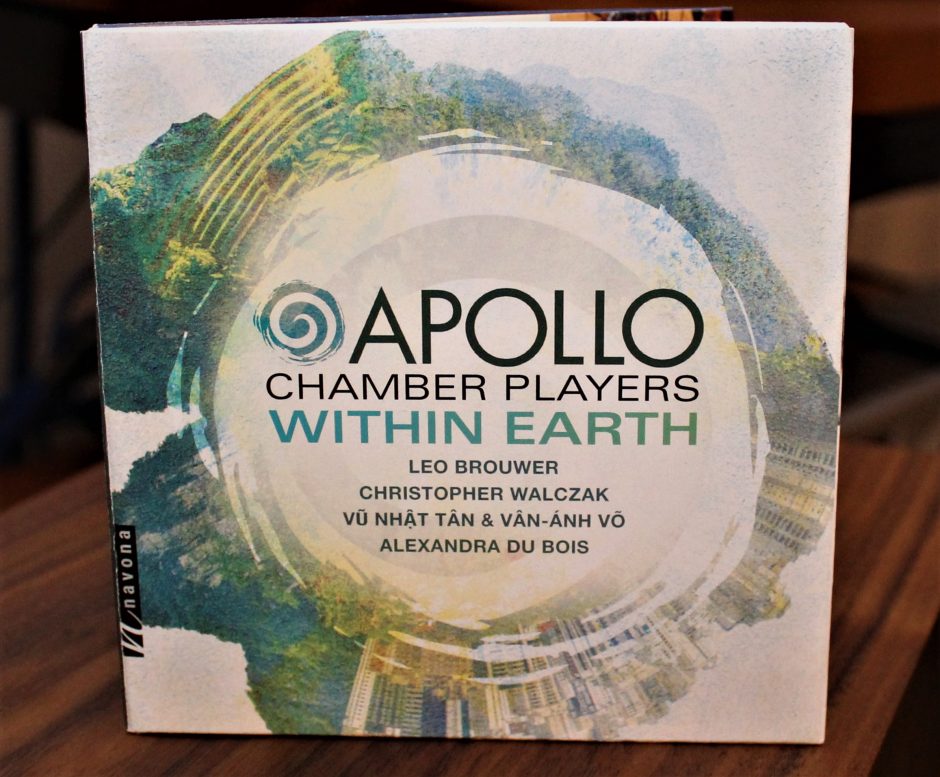 My love for the classical string quartet has been neglected for the last few years. It seems like the only new releases I receive are occasional titles from 2L Recordings–otherwise, I hear little about contemporary works that focus on what’s new. The Apollo Chamber Players, based in Houston, were kind enough to send me a copy of Within Earth, a new release that includes four major works composed in the last ten years: Leo Brouwer‘s String Quartet No. 6, Christopher Walczak‘s Four Dreams, Vu Nhat Tan and Van-Anh Ho‘s May (Cloud) and Alexandra du Bois‘ Within Earth, Wood Grows. Each of these pieces describes where we are in modern chamber works, and how we’ll move forward in the future.

The Apollo Chamber Players–violinists Matthew J. Detrick and Anabel Ramirez Detrick, violist Whitney Bullock and cellist Matthew Dudzik–might not be as well-known as The Kronos Quartet, an outfit that helped me cultivate my love for this type of chamber music, but they’re definitely on their way. They’ve won awards, played at Carnegie Hall and, like Kronos, have become a fascinating and reliable source for contemporary compositions from all over the world. While their tastes are adventurous, they’re also attracted to the pure musical content in their choices and they’re never satisfied with just the sound of their instruments. These four pieces carry distinct narratives and ideas, and they are not challenging to absorb in the least.

Brouwer’s String Quartet No. 6 is an agitated, energetic work, full of references to Webern and Schoenberg and other early 20th century composers, and yet there’s a compact structure that doesn’t hide the emotional currents. It’s subtitled Nostalgia de las Montanas, and draws surreptitiously from Brouwer’s love for Brazilian and Afro-Cuban rhythms since he’s a well-known Cuban guitarist. Walczak’s piece is remarkable for the way it highlights the viola, which serves as the “glue that holds it all together.” May (Cloud) diverges from the string quartet norms by adding the dan bau, a type of Vietnamese zither–a rare instrument that possesses an otherworldly and beautiful theremin-like tone. Finally, the Apollo Chamber Players augment the du Bois piece with contributions from other chamber ensembles–Kinetic, Windsync and Loop38, to introduce a large, expansive sound to the finale.

While these four pieces are distinct in tone and mood, it’s amazing how Within Earth flows so easily from beginning to end. When I listen to my old Kronos Quartet albums, I’m always thrilled with the variety of the pieces, and how they can ruffle my comfort levels by introducing ideas I’ve never heard before. (Kevin Volans‘ White Man Sleep is the ultimate expression of my wandering into new frontiers.) The Apollo Chamber Players aren’t playing it safe here but they are sticking to a unified motif, which is finding the beauty within a prickly exterior. If you’re fascinated with string quartets that take chances with bold ideas, Within Earth will be a pure treat.

Hamilton Leithauser, The Loves of Your Life | The Vinyl Anachronist

Singer-songwriter Hamilton Leithauser is one of my favorite discoveries over the last few years. His 2016 album with Vampire Weekend‘s Rostam Batmanglij, I Had a Dream That You Were Mine, was one of my top […]

My father, who passed away in August, loved classical guitar recordings like Hazar Reincarnated. On his birthday that was one of the very few slam dunks, a sure thing for a man who was “notoriously […]

What do you do for an encore after you win three Grammy Awards for a jazz album that celebrates the contributions of young DACA Dreamers to our society? If you’re trumpeter and flugelhorn player John […]