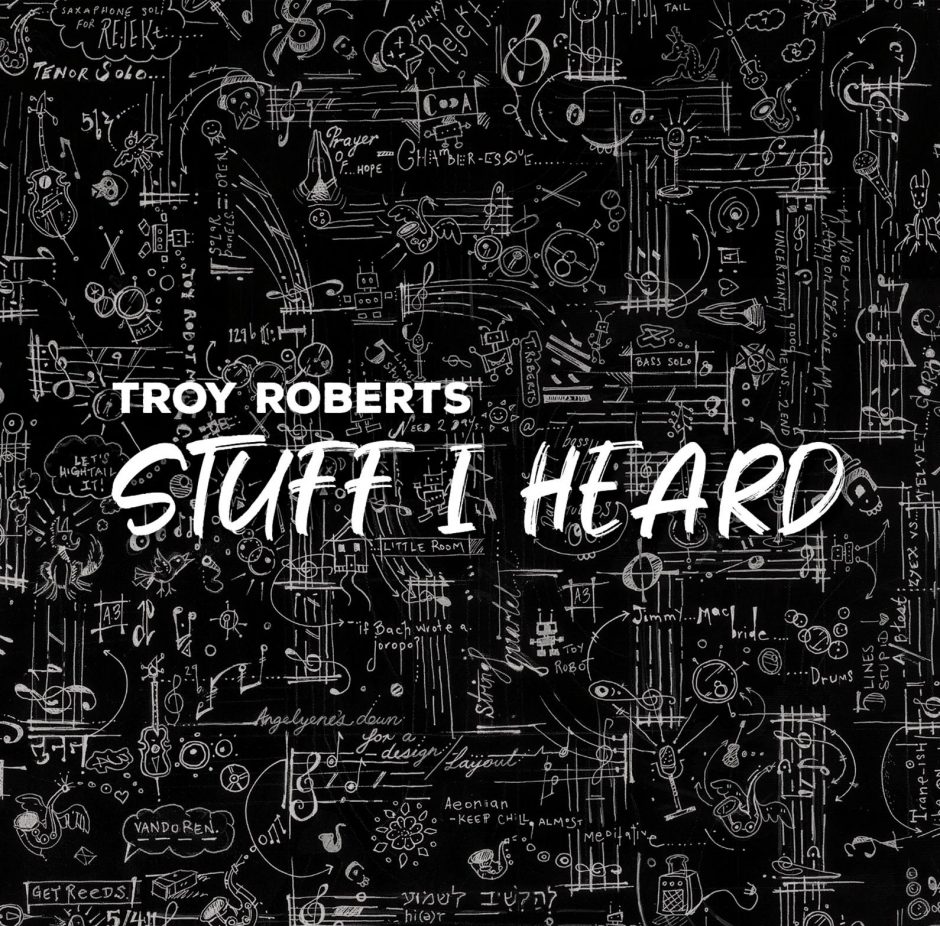 Stuff I Heard, the new album from saxophone player Troy Roberts, is the polar opposite of yesterday’s Doug MacDonald music review. The Coachella Valley Trio’s Mid Century Modern was easy, familiar and yet expertly played, the type of jazz where you turn off your brain and float along with the gentle mood. Troy Roberts has a different approach to jazz. He’s all about excitement and innovation, about doing things no one else is doing and yet still wrapping it up in a thoroughly jazz-like veneer. He’s not into free or experimental jazz, but he’s definitely finding nooks and crannies to explore, places that have never hosted a jazz musician like this. I’ve reviewed a handful of his previous releases, and he never fails to be intriguing with his musical choices.

Troy Roberts offers an interesting story behind Stuff I Heard. While Mid Century Modern was all about three veteran musicians who have developed a stunning synergy, this is about Roberts and how he composes. Whenever he has an idea in his head, he simply sings them into his phone. “Every so often, I transcribe and save them to a folder on my hard drive called ‘Stuff I Heard’ for later development.” What makes this album even more fascinating is that Roberts goes beyond his usual soprano, alto and tenor saxes–he also plays the acoustic and electric bass. His only partner in this recording is his longtime live drummer Jimmy MacBride.

What makes Troy Roberts so unique? He reminds me a little of pianist Fred Hersch and how his phrasing is so distinctive. He’s not reaching out into the wilderness and grabbing something brand new, as most specialists in jazz improvisation. Instead he’s going back and finding out what no one else noticed on the first pass. His melodies and themes aren’t alien to jazz fans, but they always seem like they’re being approached from a different direction. This sounds like great jazz from the past, but it also suggests new directions with every note.

Since Troy Roberts is playing so many instruments on his own, he’s also paying attention to how he’s arranging the tracks. He uses multiple saxophones for “harmonic support,” and he layers those bass tracks as well. That creates an overall sound that doesn’t sound like the duo that it is, or even a trio. Stuff I Heard is full of beefy horn sections, with an energy that suggests what you might hear from big band jazz. If you didn’t know the story behind this album, you’d probably guess that a quartet or quintet were playing at the very least. That’s impressive enough, but it’s the music that matters here. And in this case, it’s superb.

I’m not sure what type of morning we’re waking up to, but it almost has to be a good day to play Noshir Mody. The title of Mody’s new album, An Idealist’s Handbook: Love and […]

In the space of just a few days in late summer I received several new releases in the mail that were double albums, chock full of music and additional content. Hazar Reincarnated was one (even […]