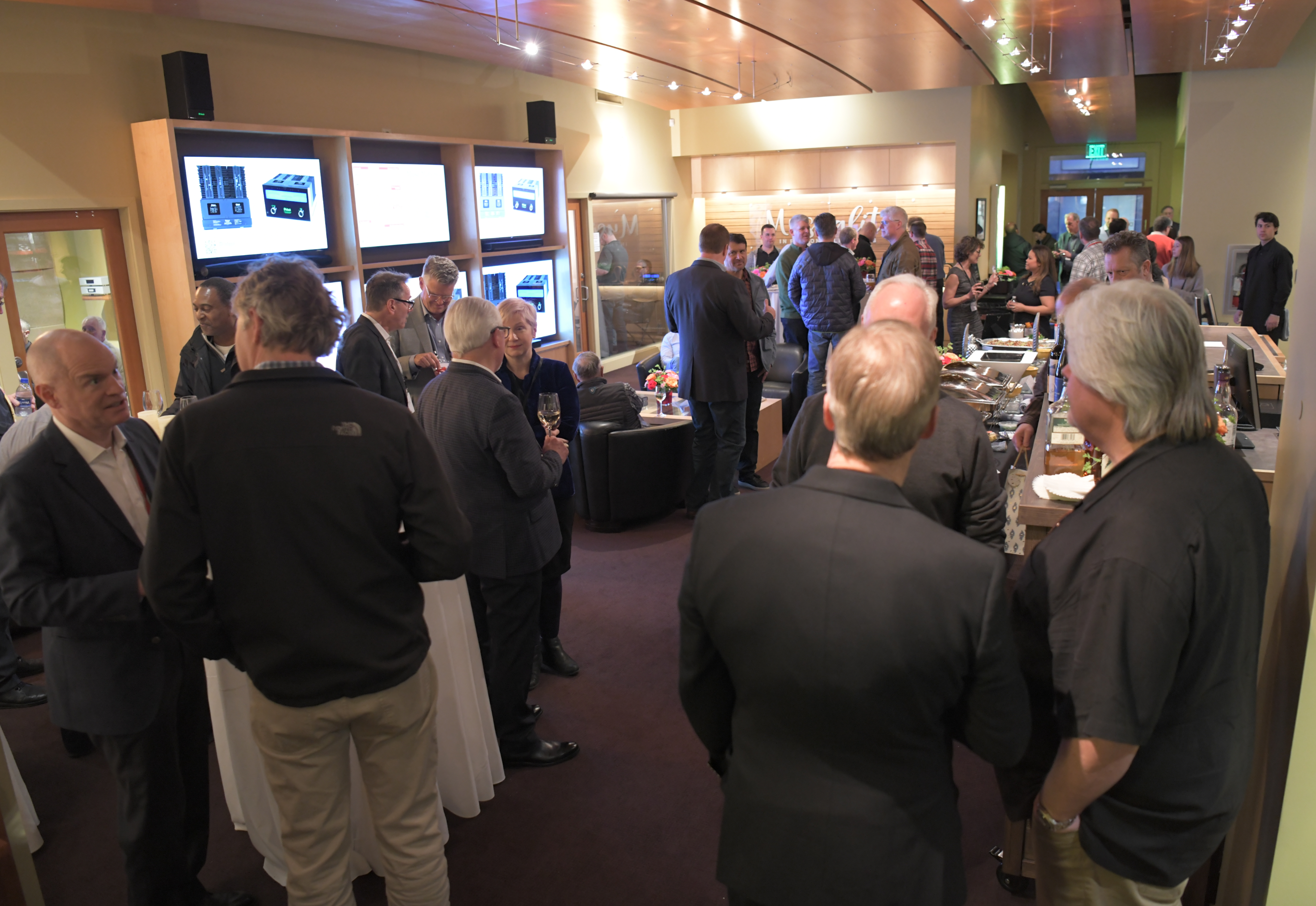 In a time where audio shows are being canceled faster than toilet paper is being pulled off the shelves, Definitive Audio managed to host Music Matters 15 to celebrate their 45th year in business in Seattle in March.  This year had a twist, instead of squeezing in a full house of attendees, they opted for a small event covered over two nights and made all the demo systems available for audition for the rest of March. Their six rooms ranged from entry-level (under a couple of thousand dollars) to one where if you must ask the price, well don’t … just press play and enjoy the experience.

I had heard all of these pieces individually or in other combinations, but never all together.

40-year-old Transparent kicked off the evening showcasing their top of the line Magnum Opus interconnects and speaker cable, Transparent XL digital cable and Transparent Opus power products.  Bob started with the goals of their products: tonality, dynamics, and space. We can debate if they achieve it (I believe they do), but when executed they offer great music reproduction. 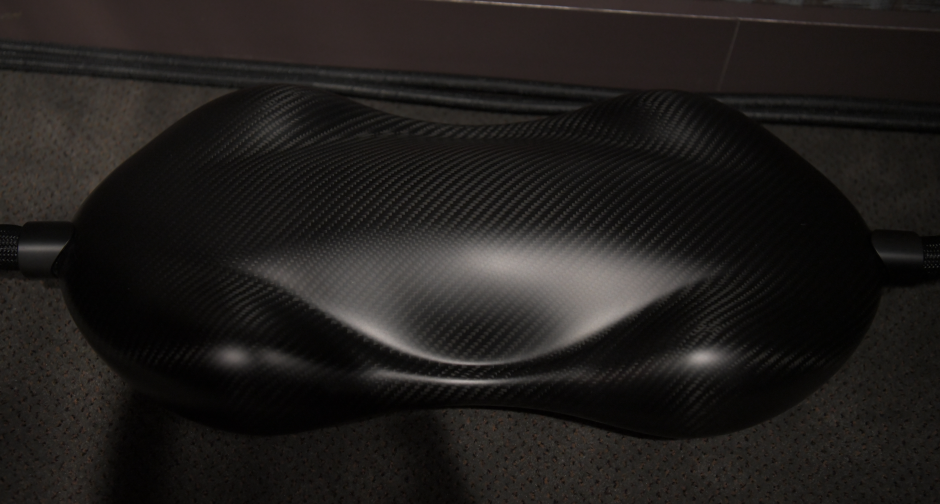 Dan D’Agostino himself made it out to MM15 and it’s always a pleasure to hear him give us the skinny on his work.  Dan reminded us that his goal was always to make a perfectly balanced amplifier.

“In my opinion, all amplifiers should be balanced. Balanced in and balanced out. Unless you do it perfectly, you will have a sound that is not as good as a single ended amplifier.” 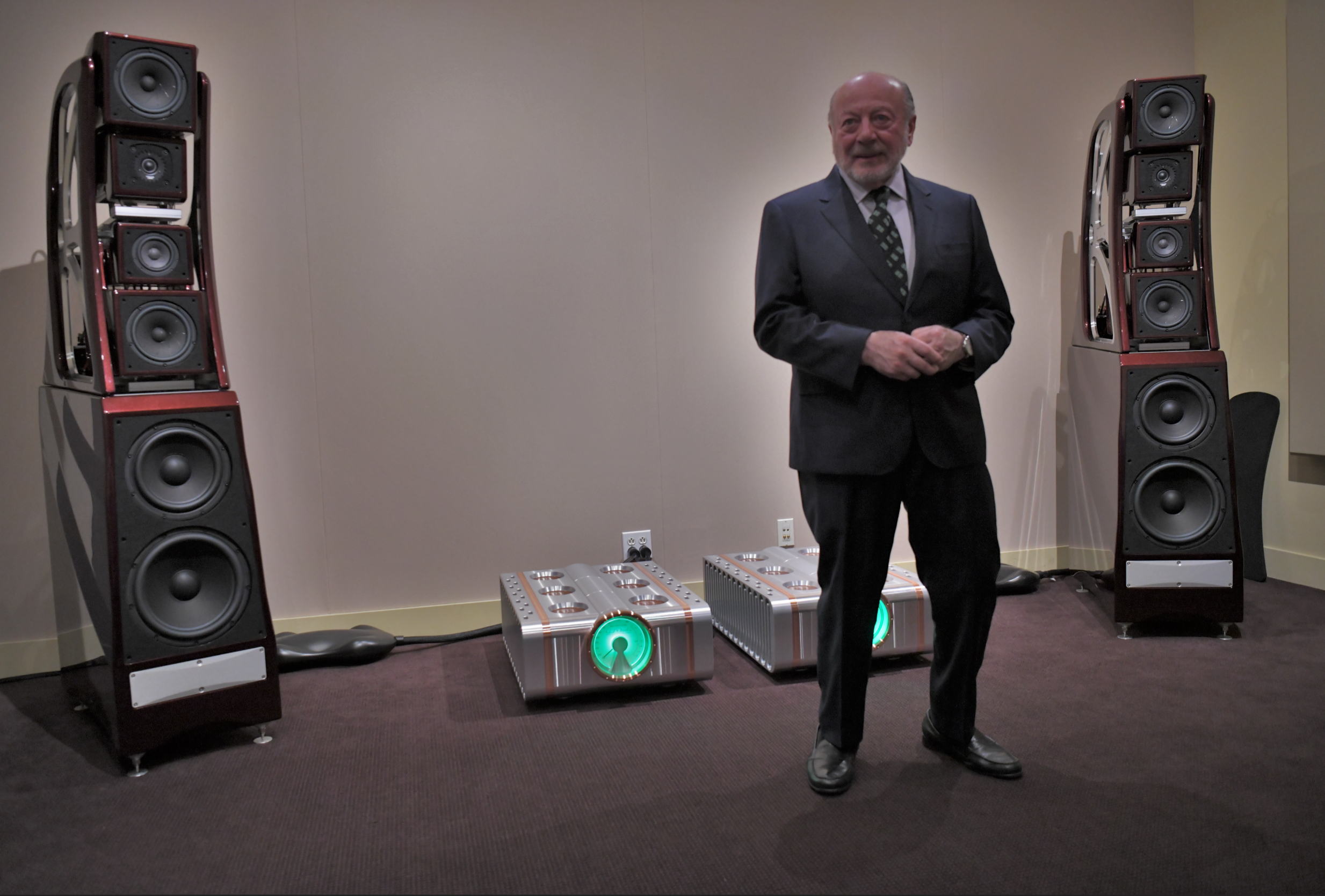 “But when you build a truly balanced amplifier, with an exact reciprocal, where the plus and minus are perfect mirror images, you can listen to this phenomena which is almost unlimited power, musicality, detail, and tremendous energy that you don’t hear in most amplifiers.” 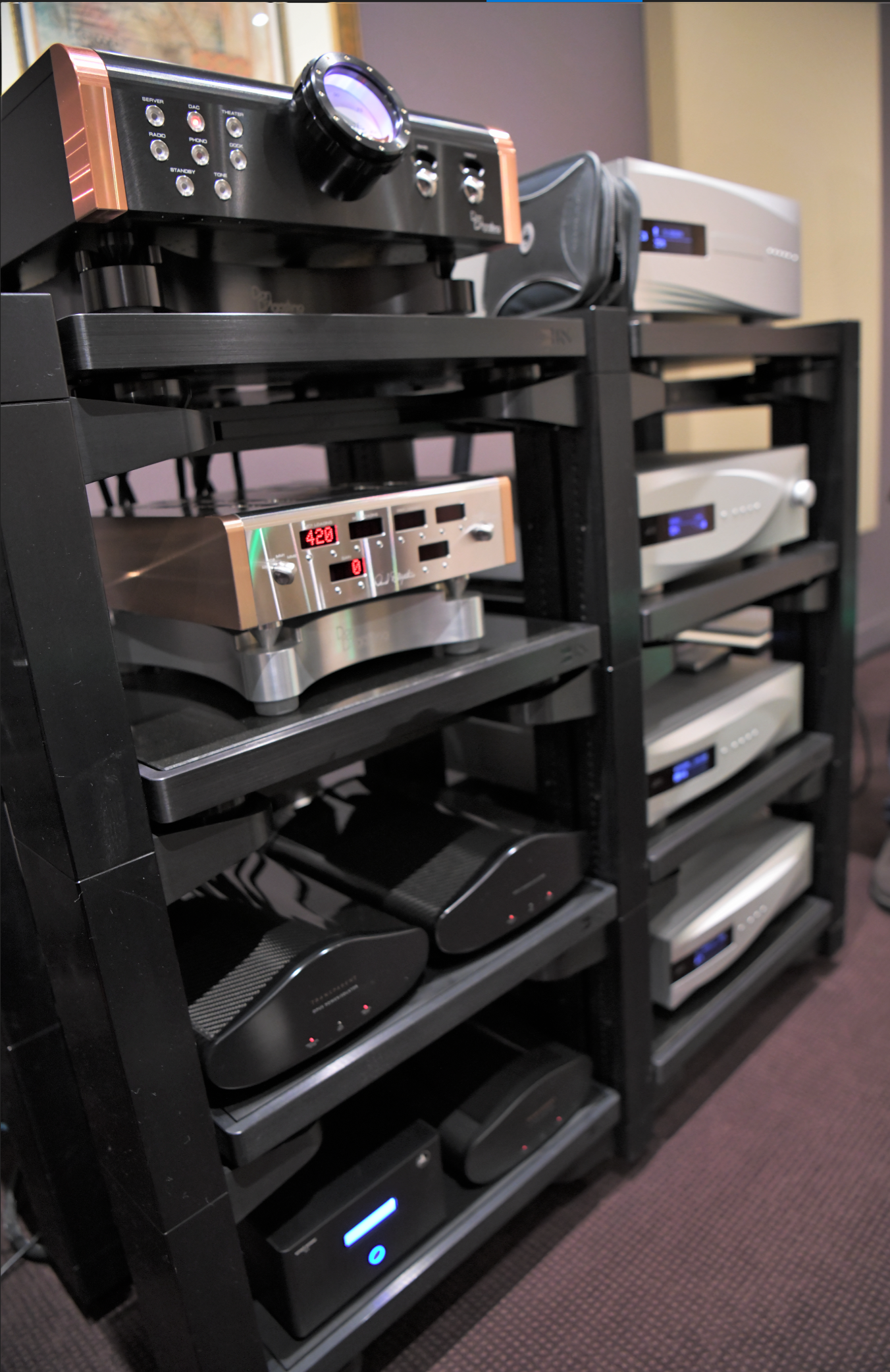 Dan announced that he has a Relentless Pre-amplifier in the works! It was going to debut this week at AXPONA, but with the show canceled we’ll hope to see it elsewhere, soon.

Brad O’Toole was next up and walked us through the HRS reference VXR Audio Stand, loaded with HRS M3X isolation bases. It looks clean and modern, especially in their black finish.  My gear is banished to a server rack in the garage, but it would be nice to have this level of isolation. 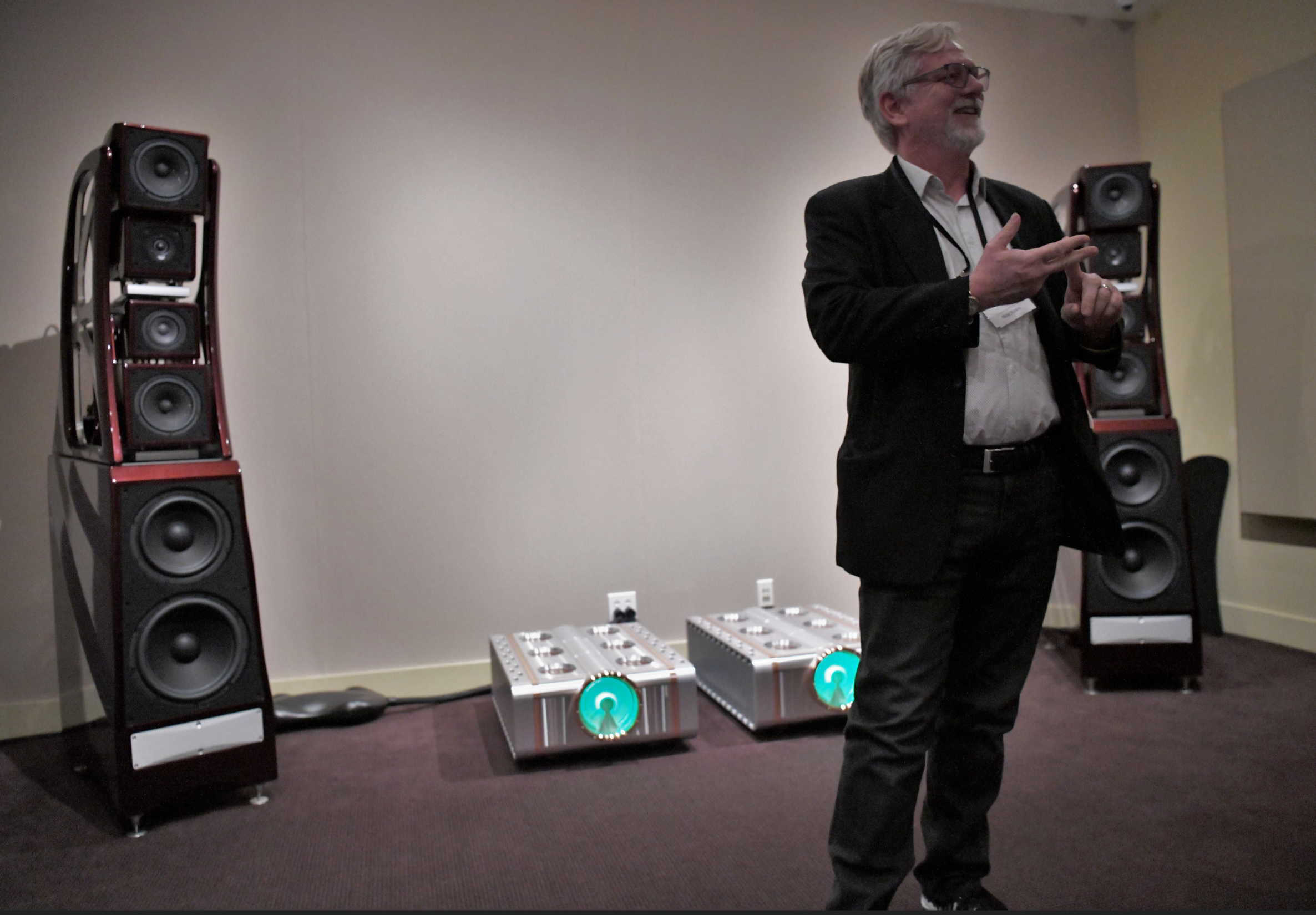 Brad explained the level of customization in the rack for any system. My personal experience with just their shelves has been positive, enjoying the fact that you can customize the parameters of their shelves to the size and weight of the equipment that you place into it. 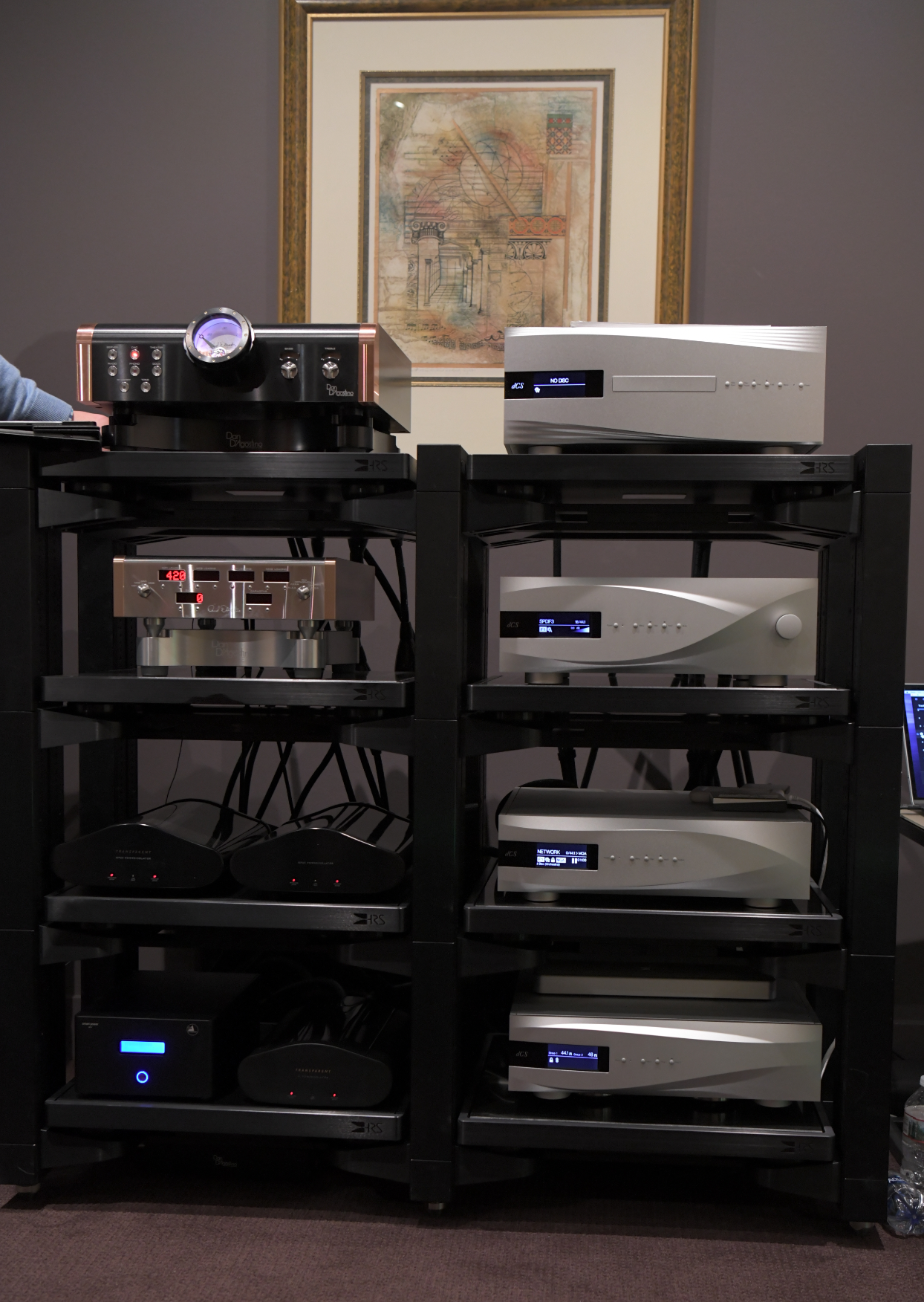 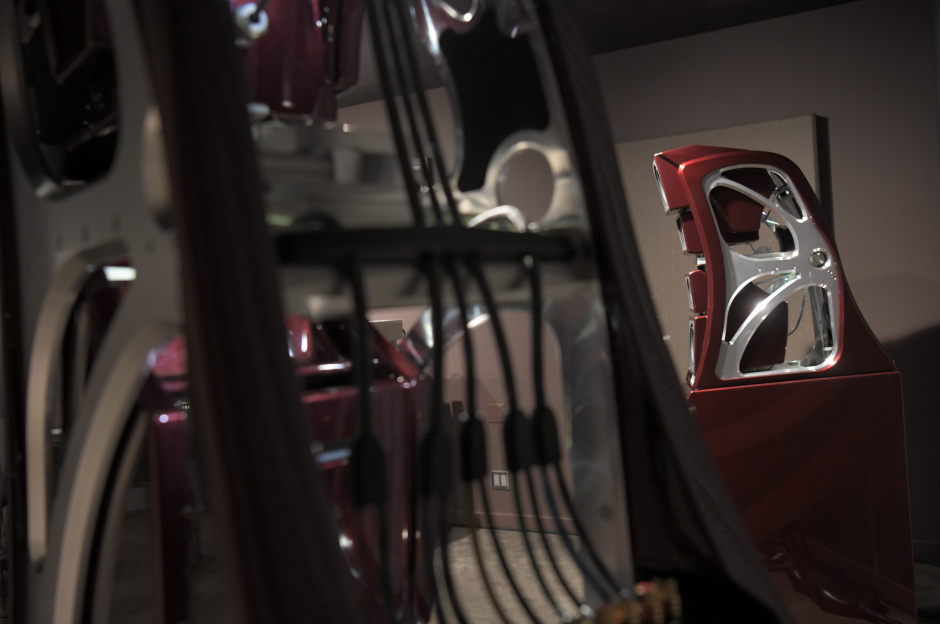 Sporting a suit and cool red shoes, Daryl Wilson started kicked off his presentation with:

“Music is a wonderful thing in our lives, and everyone connects with music in a different way” 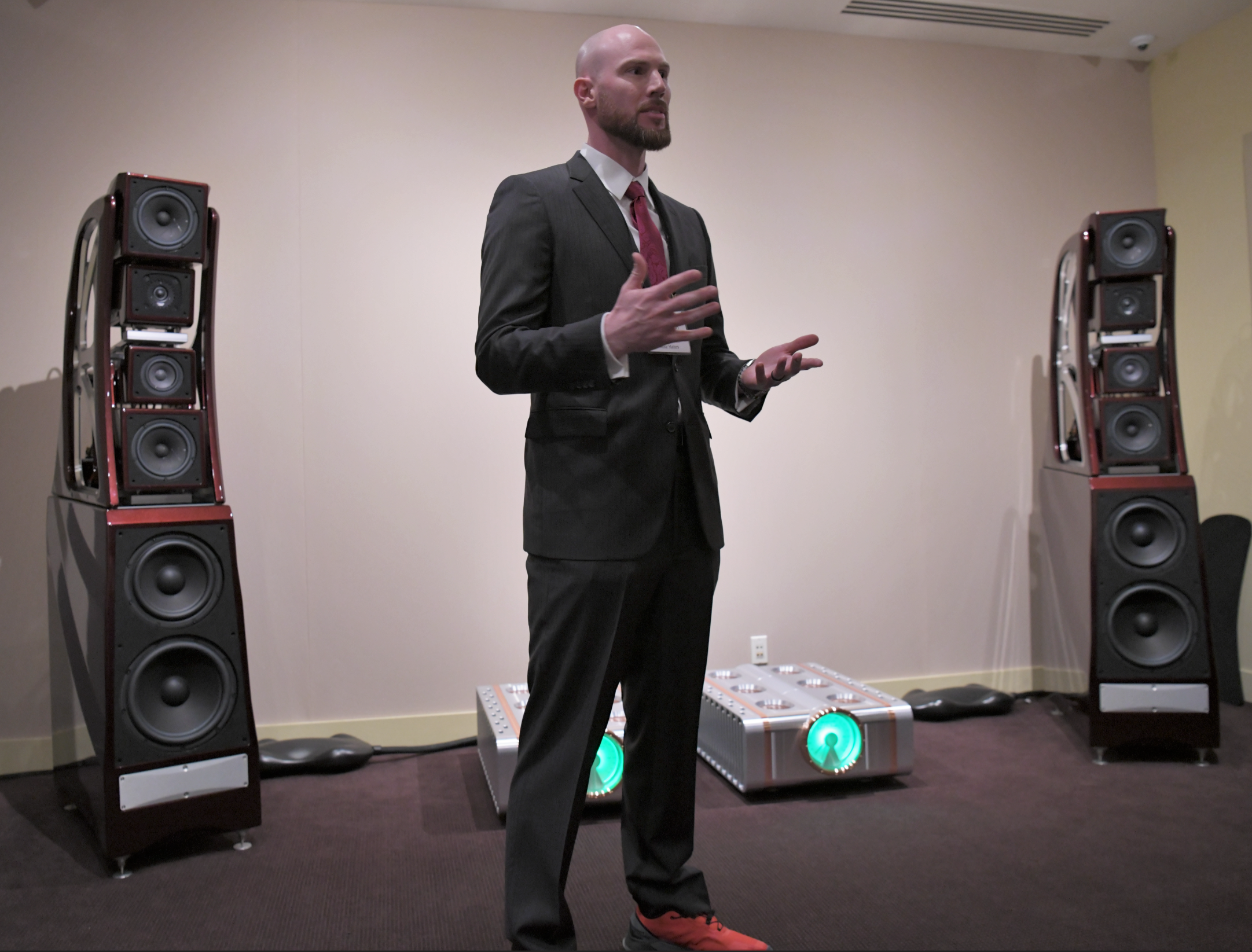 Daryl went on to explain the name for Wilson’s latest large-scale speaker, the Chronosonic XVX, just one step down from their reference Wilson WAMM Master Chronosonic speaker that his late father David Wilson developed.

Coming off the explosive WAMM Master Chronosonic, Daryl and his team had the challenge of how they could make a smaller speaker that could be used in more rooms, at a more affordable price, and not loose performance.

Although the XVX is big, it is still about a foot shorter than the WAMM. It sports a total height of 6 feet 4 inches, the exact same height as Daryl standing beside it. 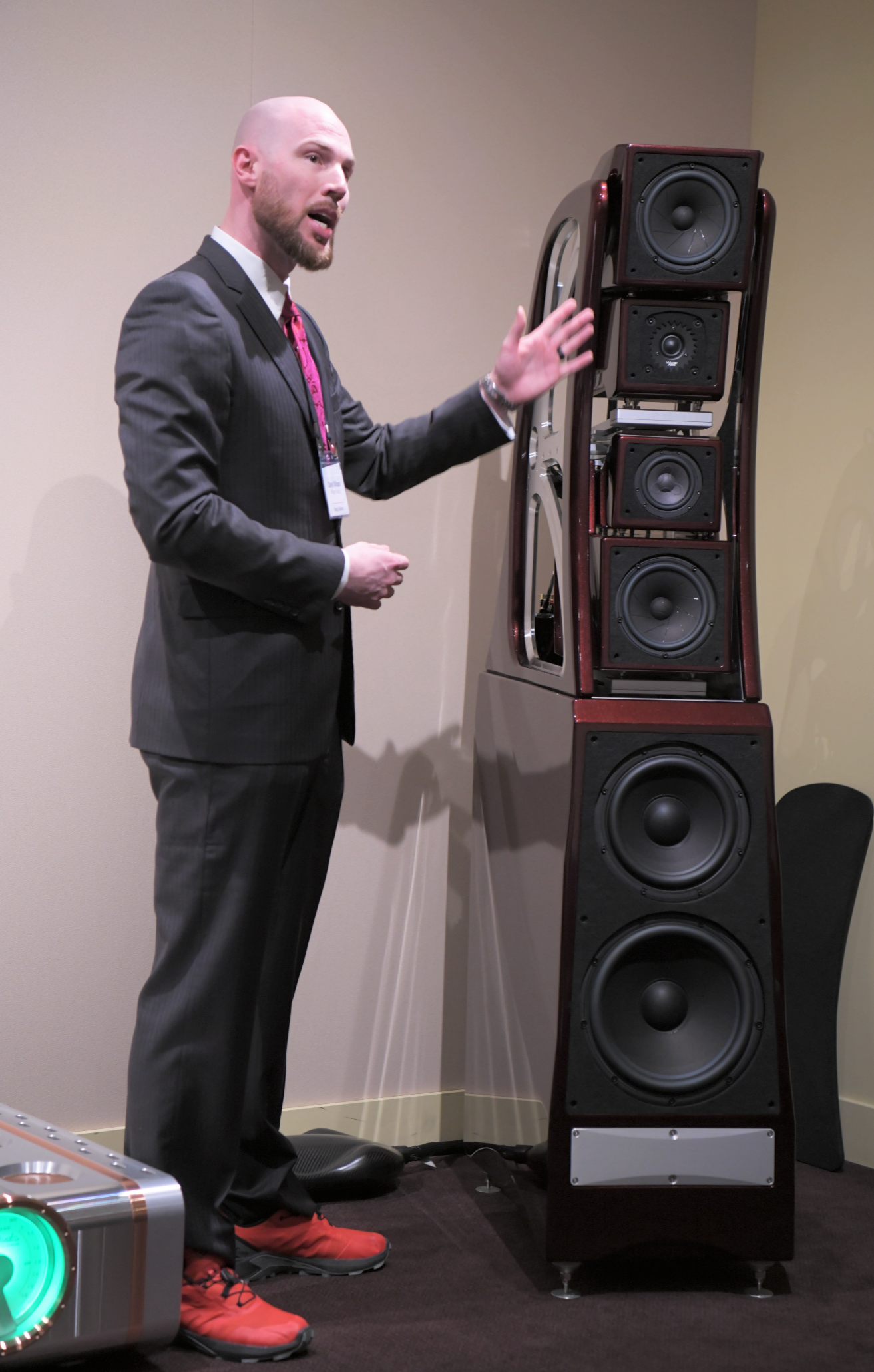 The key changes in the XVX over the WAMM include 2 less drivers per channel that allowed them to decrease the total height of the speaker by about one foot. The design maintains a rear-firing Convergence Synergy Mach 5 tweeter, like the WAMM, with an attenuator, allowing you to adjust for the ceiling height of your room.

Like the WAMM and Alexx, the XVX includes a crossflow port system that allows you to decide if you want to port the bass cabinet forward or back to also allow for room adaptability.

The mid-range driver has been updated and was a design that was started during the WAMM design process and has been recently finished by Daryl and his team. 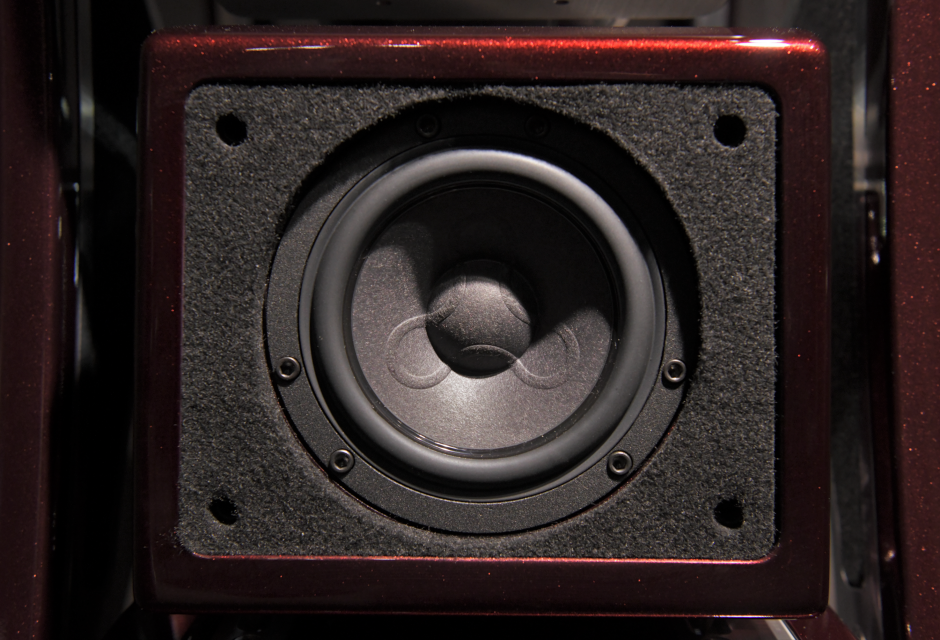 The paint-process has also been elevated and showcases a new set of pearl finishes. 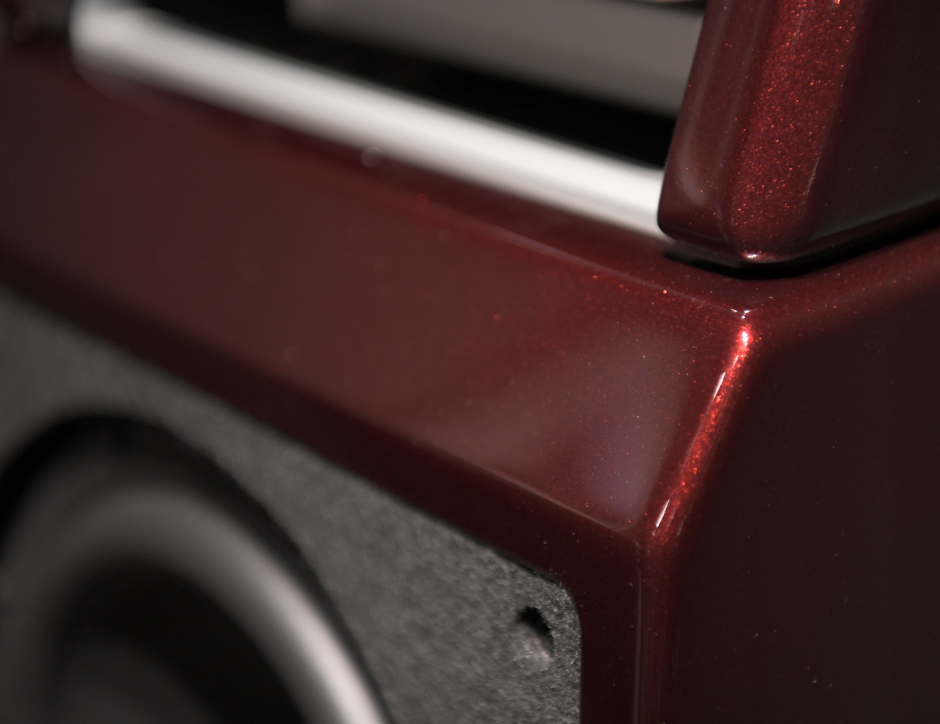 The amount of adjustability of the modules for time alignment is impressive, both in terms of results and in terms of pure engineering. In addition, the XVX also adds LED lighting to allow you to showcase the hardware.

Daryl claims that you can adjust the time alignment down to 2 microseconds which is lower than perceivable by the human ear. 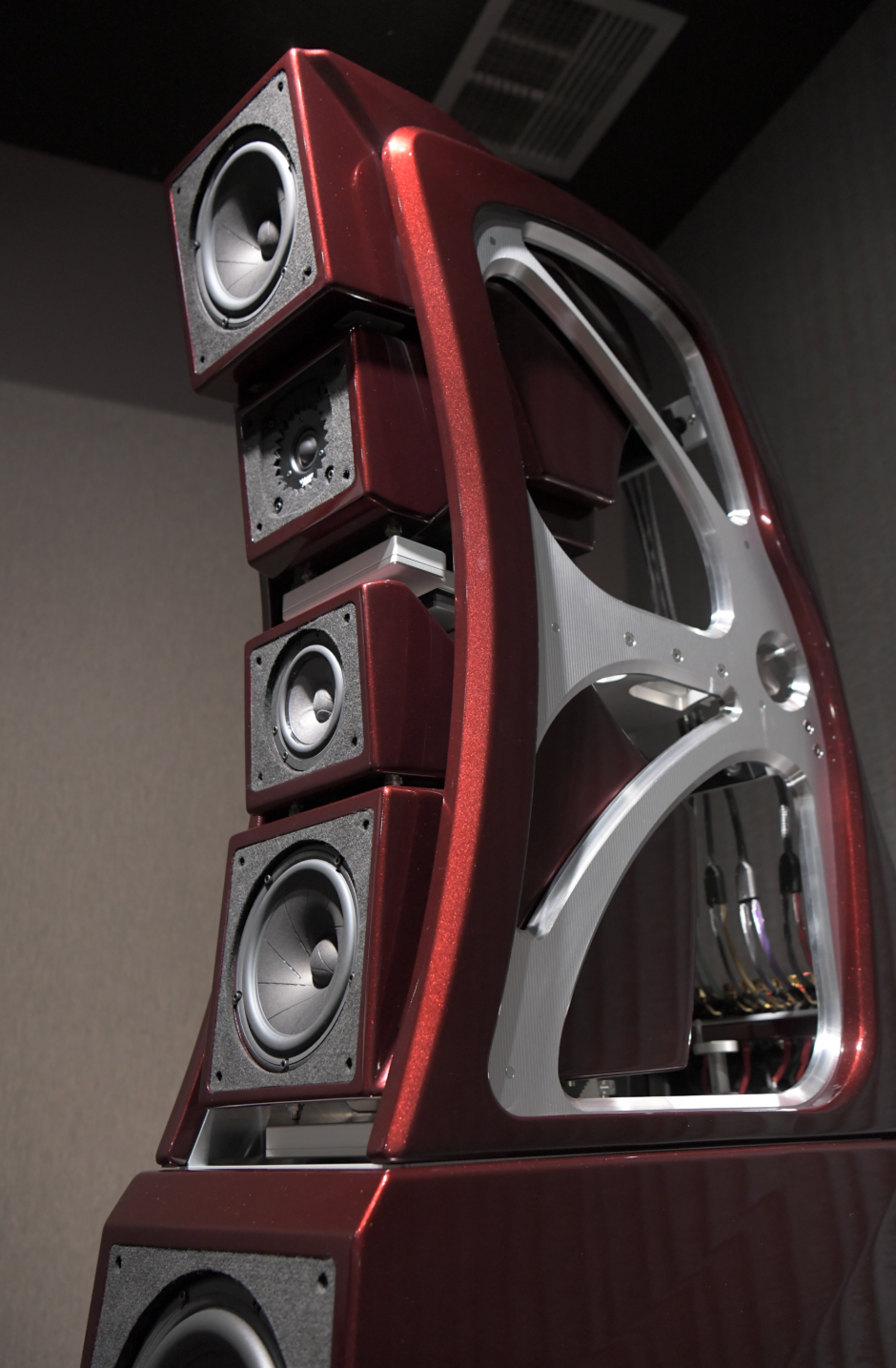 All playback for the evening was digital, and provided by a dCS Vivaldi stack. Music was streamed from TIDAL / Qobuz using a dCS VIvaldi Upsampler as well as wonderful recordings from Peter McGrath. 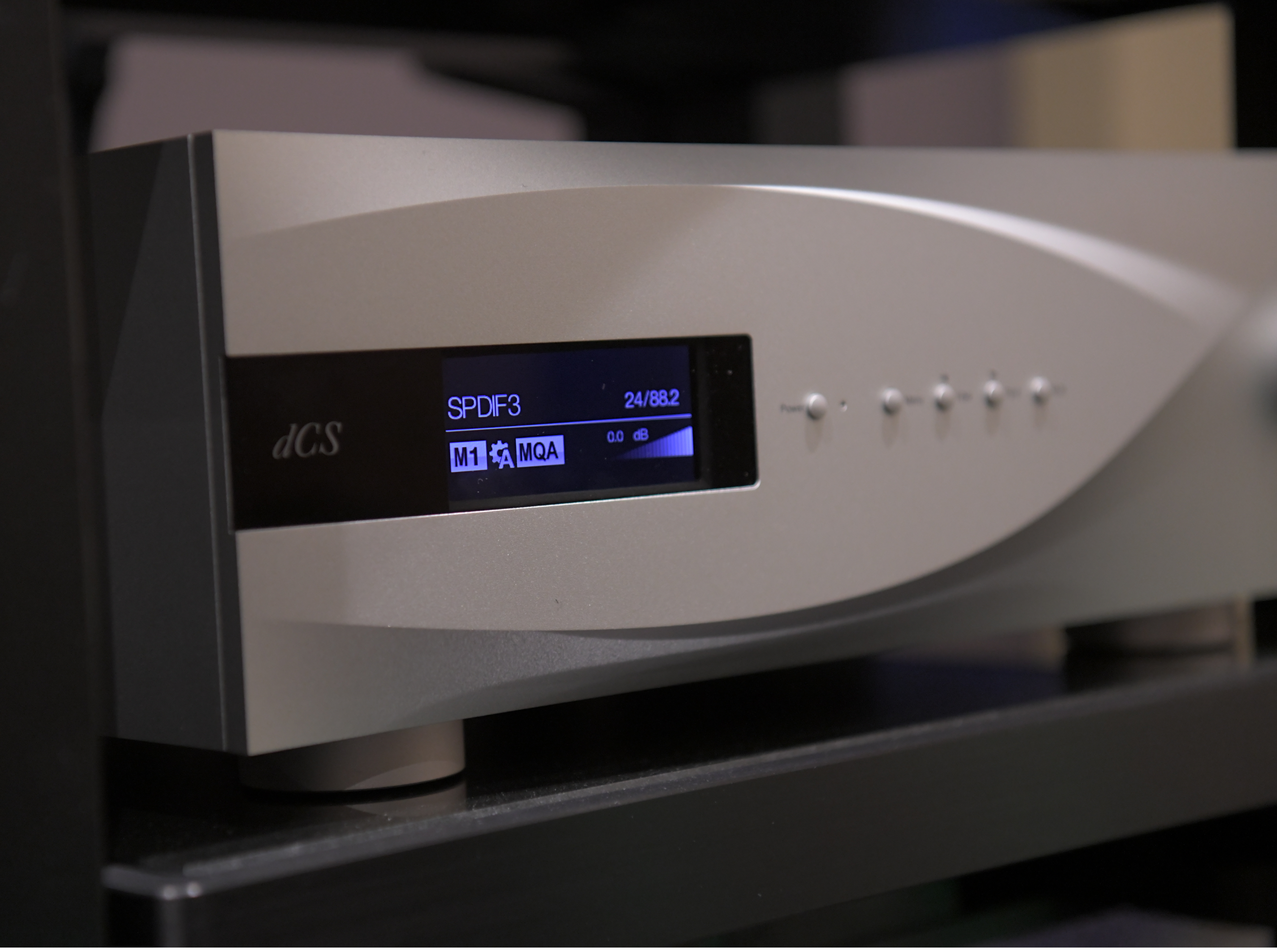 The first track that pressed play was a demo track that I had not heard in years. It was what Daryl thought we needed to get past COVID-19, and I think he was right. It was “Don’t Worry Be Happy” by Bobby McFerrin.

It was fun, upbeat and demonstrated the lay-out of the instruments with extreme precision. Daryl had memories of dancing at home with his dad when he listened to it- a lovely memory of him and his father.

At this point, Peter McGrath of Wilson Audio took the keys and became DJ for the rest of the evening. 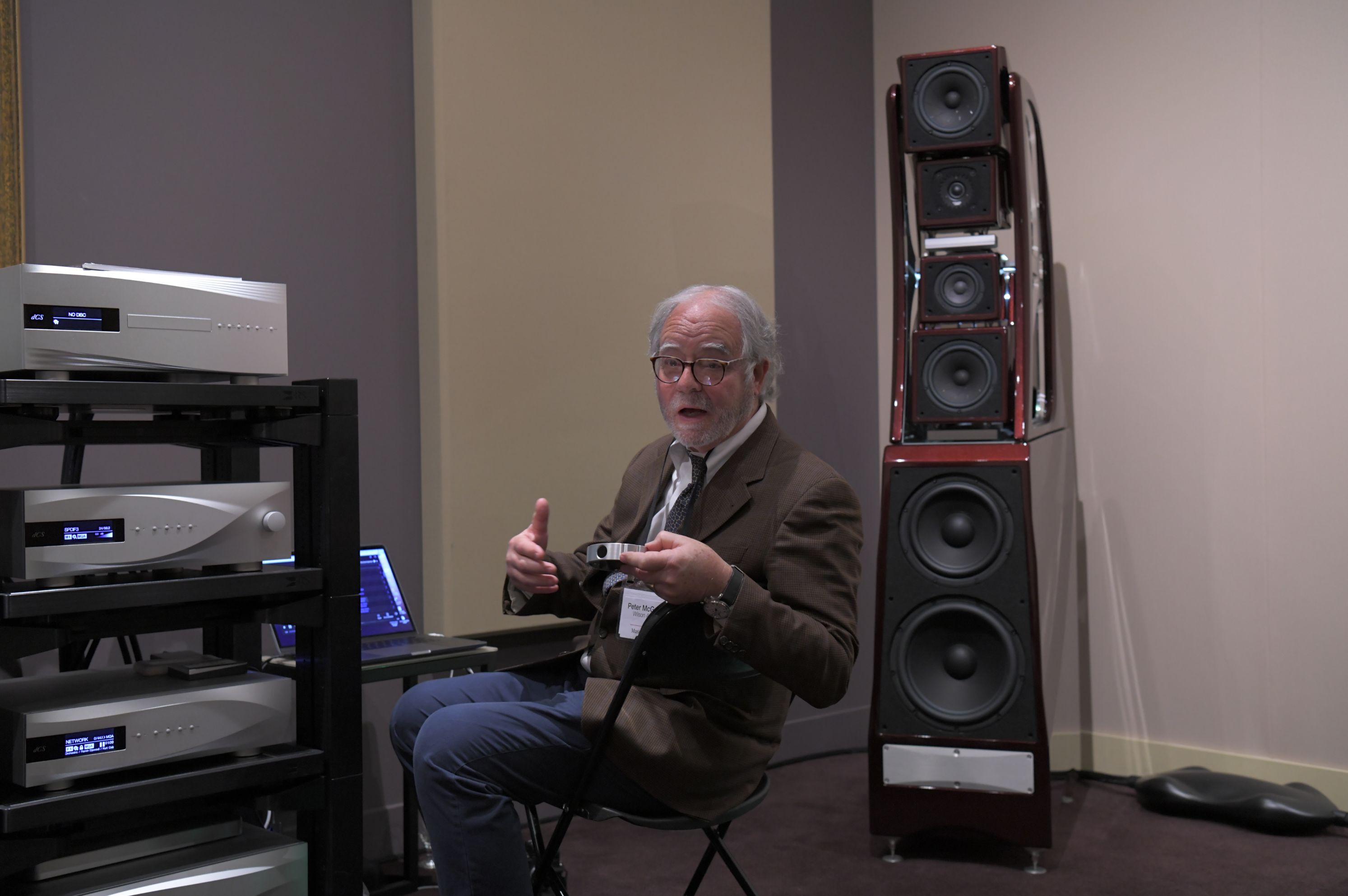 He wanted to light it up with some electronic music from Boris Blank.  We listened to “The Time Tunnel” from his “Electrified” album.  You were instantly surrounded by a wall of sound. All kinds of sonic creations extended from floor to ceiling, and you were walking into a huge sonic escape. The room was about to get huge. 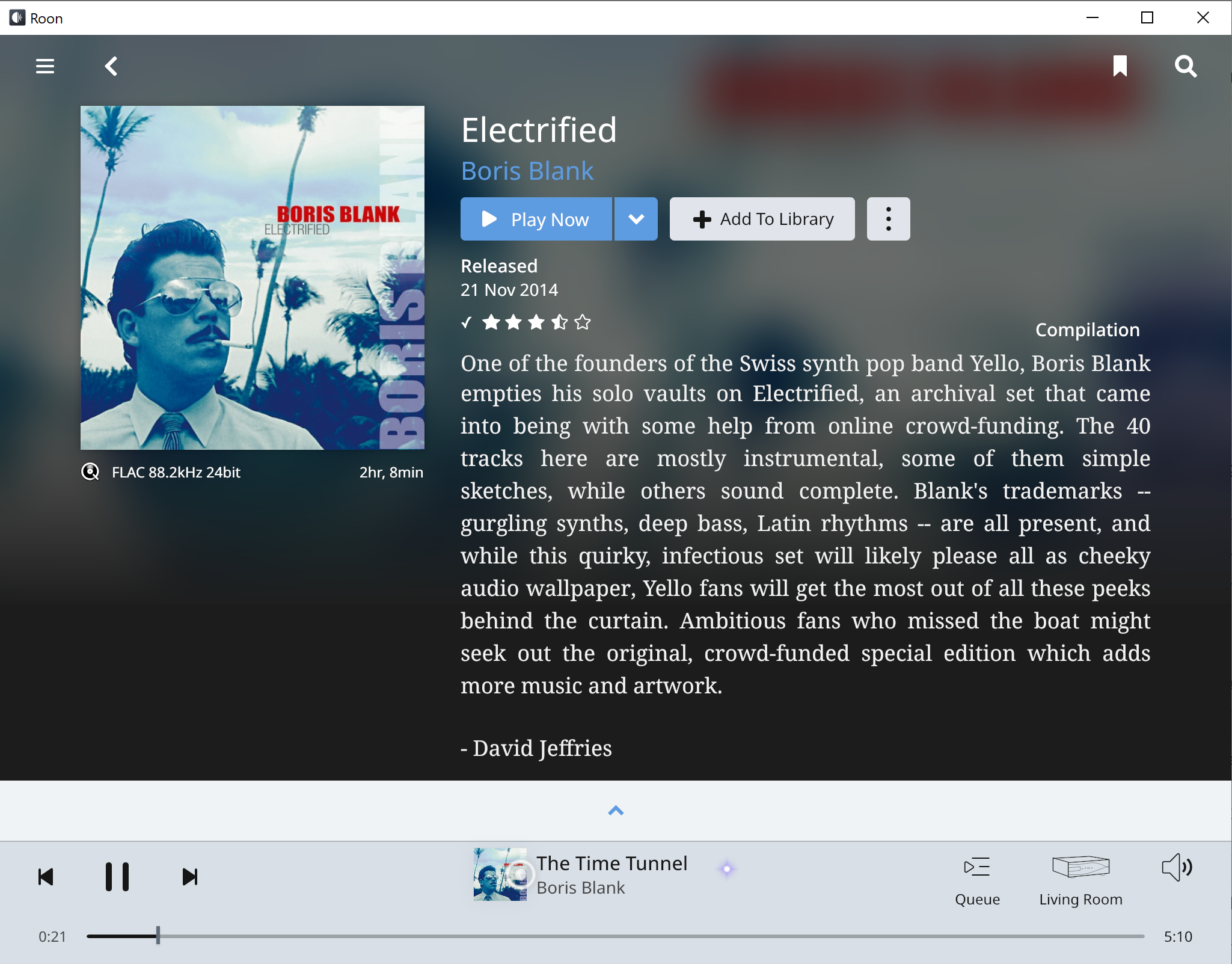 I was thinking, it is the exact music I want to hear at a club, and in this case, it sounded amazing. I wish we could have pushed it to 100+ dB. The Relentless amplifiers were ready to run, but I am not sure the other attendees would want that level of volume. I did.

Next up was the other extreme; Peter moved on to something delicate that he had recorded in Miami. The question was, could a large speaker like the XVX with so many drivers render something like an exquisite solo of a piano and violin.

The real challenge is for a speaker this big, with so many drivers to render something as exquisite as a solo violin and Piano, and to get them to the right size and scale.

Following this, we went back 50 years and listened to some classic Frank Sinatra. Peter played “What’s New”, a beautiful song about meeting a lover that you lost. With the resolution of the system and its ability to reproduce, you feel every ounce of emotion in Frank’s voice as he reached out in pain. 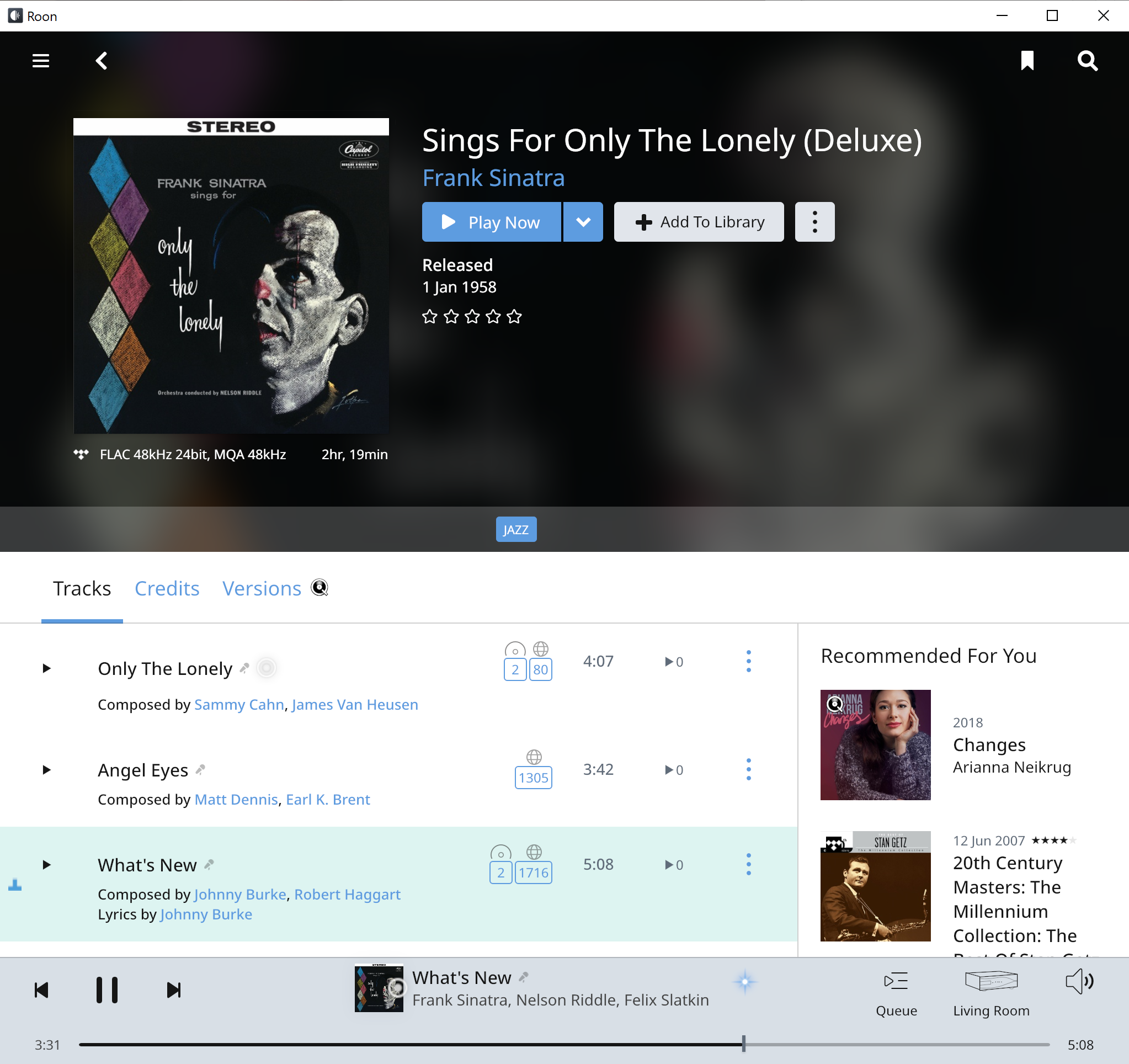 The pairing of the two seemed to be like a seamless combination. For the first time in many years, it reminded me of that magic moment I had when I got to listen to David Wilson’s listening room with the Wilson Audio WAMM Master Chronosonic. Was it better than that, no, but it did take me back in time .… 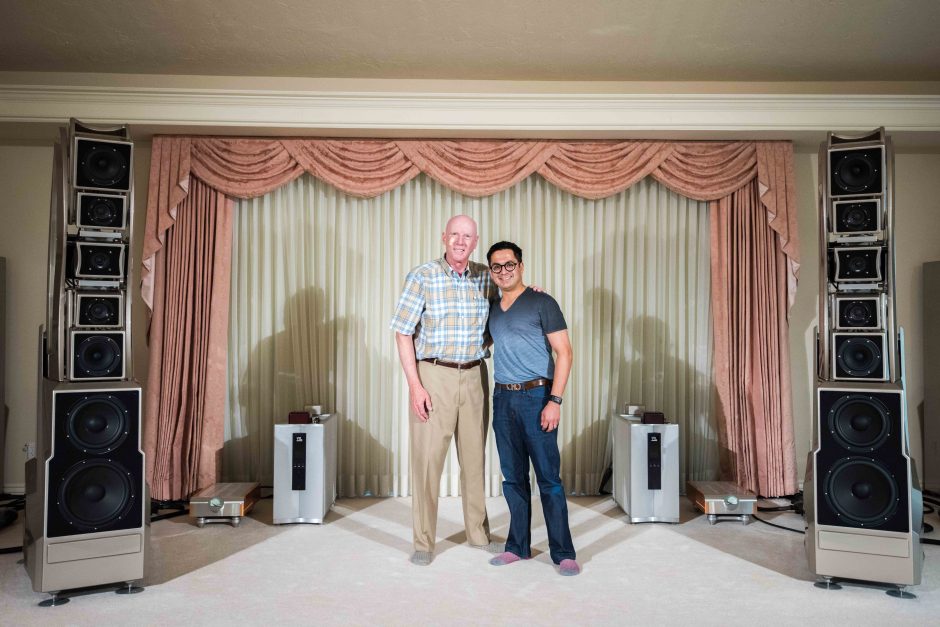 Alex Siufy of Alma Music and Audio in San Diego had a very strong presence at T.H.E. Show 2019 with multiple exhibit rooms. I previously mentioned how wonderful the latest generation of Wilson Audio loudspeakers […]