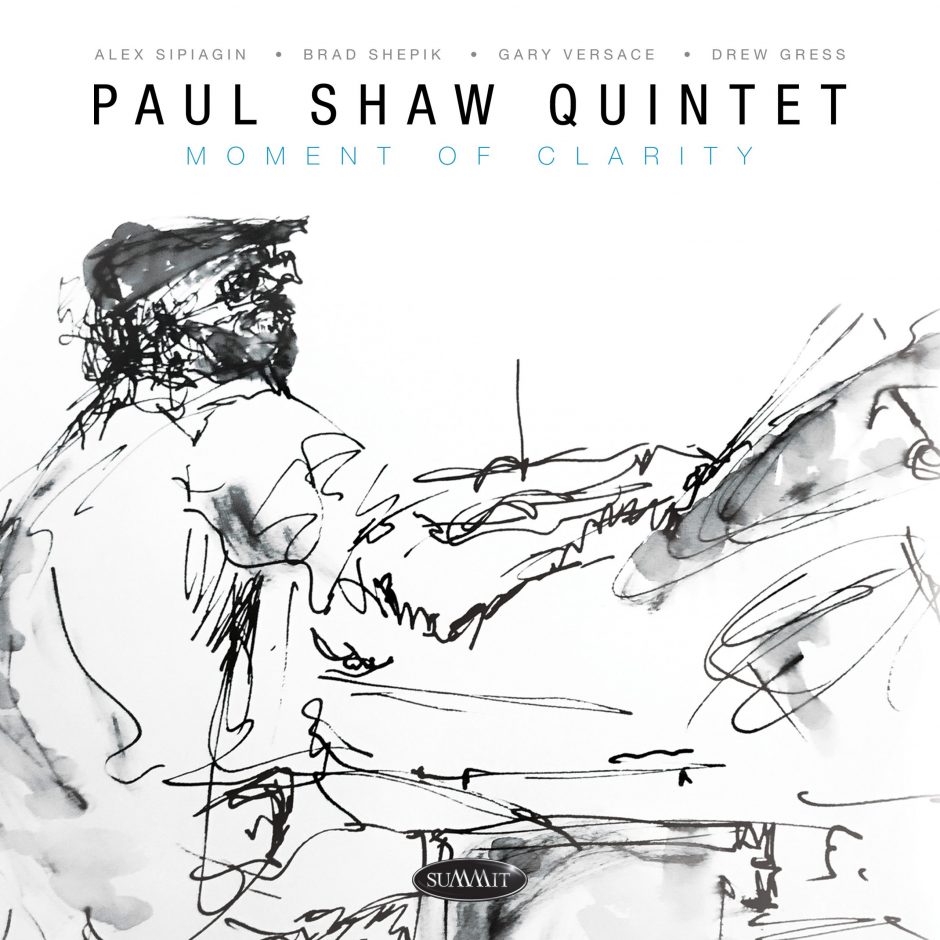 After spending most of last week inundated with jazz trios, it’s time to expand the mix into something bigger–say, a jazz quintet. (That, of course, wrongly suggested that I’m organized about the order of these reviews.) The Paul Shaw Quintet fits the bill with an exciting, energetic set that uses the momentum you can only find when the drummer is the band leader. Paul Shaw, born and raised in South Jersey, has played in small ensembles and big bands, and his arrangements reveal a gift for making a handful of gifted performers sound downright huge. Moment of Clarity is his first release as leader, and it’s a confident debut that captures his style for clean, forward style on his kit.

Paul Shaw knows that a confident debut requires that you surround yourself with experienced musicians, which explains why he has called on trumpeter Alex Sipiagin, guitarist Brad Shepik, pianist Gary Versace and bassist Drew Gress to follow his gracious lead. Shaw is one of those drummers who can settle into a variety of grooves with ease, and he can extract an amazing array of percussive sounds. (He’s generous with the drum solos, by the way.) His quintet can adapt to that shape-shifting–just absorb all that gorgeous drama in “Song for Everyone”–and Moment of Clarity becomes a jazz album with plenty of twists and turns.

Many drummers-as-leaders sit back and provide an important foundations so that the others on stage can wander and roam through various ideas, but Paul Shaw creates a unique energy on his drum kit, so much so that his direction is clear and noticeable much of the time. He’s busy without being domineering, and there’s a lot of individual touches hiding between the beats. That makes him the proverbial drummer’s drummer, I suppose, doing those special little things that hardcore jazz fans will love, but at the same time Shaw is exciting, even when he’s leading his quintet through ballads. Amazingly enough, his style is both restless and disciplined.

No, I don’t have a batch of jazz quintet recordings ready to go. The Paul Shaw Quintet’s Moment of Clarity won’t be another kick-off for a Theme of the Week. In fact, I see plenty of jazz trios in the review pile, so I view this album as a respite of sorts. I could dive into the crowd of big band recordings that have recently showed up in my mail box, but these are quiet and reflective days. Moment of Clarity is just that, the right album for the right kind of day in late April where the snow is still falling, however lightly.

Stuff I Heard, the new album from saxophone player Troy Roberts, is the polar opposite of yesterday’s Doug MacDonald music review. The Coachella Valley Trio’s Mid Century Modern was easy, familiar and yet expertly played, […]

Futari, Beyond | The Vinyl Anachronist

A recording of piano and vibraphone duos? I’m not sure how it gets any better. I’ve mentioned my love for “malleted instruments” many times before, and I’m starting to think there’s something in the tones […]