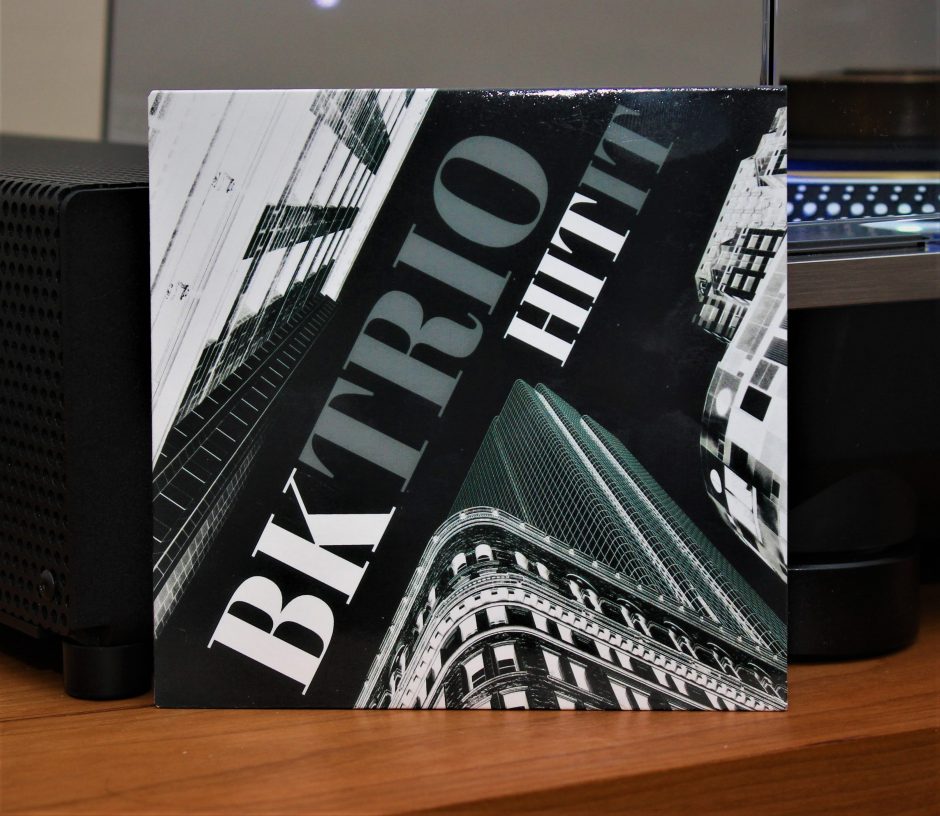 Thankfully, Hit It from the BK Trio sounds quite different from the seemingly countless jazz trio recordings coming out this spring. Much of that comes from guitarist Brian Kooken, the BK in BK Trio, who leads his organ trio through a blistering set with loose undercurrents of rock and the blues. That’s not to say he sounds like a rock guitarist who wandered into the wrong room, but when you learn Kooken was born in the ’60s and openly declares his love for David Gilmour’s playing, the same as me, you hear it in his music.

BK Trio is indeed an organ trio, an ensemble always welcome in my house. Organ trios continue to intrigue me because they can be so down and earthy and full of the sound of air moving slowly. Since the bass is usually played with the organ’s foot pedals, something I used to call the Ray Manzarek syndrome, there’s a greater simplicity at work here. Greg Hatza‘s Hammond B-3 is locked in a foot race with Kooken’s guitar–they play together and they play fast, matched by the swift drumming work from Robert Shahid. This is indeed one of the quickest and liveliest organ trios I’ve heard in a long time, but they’re doing it without succumbing to a wild energy that might seem out of place in the genre.

That means Hit It can still be in a supreme groove when it wants to, which is about half of the time. But there are so many ideas flowing from Kooken and Hatza, plated beautifully by Shahid, that you’ll feel the careful structures at work, the idea that quiet and loud can happen at the same time. Every once in a while you’ll find yourself in a moment where, removed from context, you hear those rock and blues influences appear in the phrasing. It’s so convincing that you expect Shahid to come in big with an athletic and steady 4/4, but he doesn’t. That creates tension and excitement in the BK Trio, which elevates all of the performances here.

Brian Kooken also seems to defy expectations when it comes to a boomer rock guy who really wants to lay down some jazz. Kooken’s more than legit–he spent a lot of time playing the blues in New Orleans, most notably with Marva Wright. When he was younger, he played a lot of gospel music. That’s the secret behind the BK Trio, presenting those influences, those life experiences, and allowing them to bleed through where needed while maintaining a stolid sense of “this is what I do now.” Doing it this well also helps.

Saxophone player Anna Koroleva just sent me her new album, Antigravity, straight from Russia. This was probably my favorite part of covering contemporary jazz in 2021, this influx of recordings that have come from places […]

The Naim Audio Mu-so changed the way I listen to music. That’s not hyperbole, a ready-made pull quote that Naim can use in their print ads. A few years ago, I was lucky enough […]

Melbreeze (website) is a singer who was born and raised in Turkey but now lives in the United States, and she has certainly found a niche for herself in contemporary jazz. I Love Paris is […]