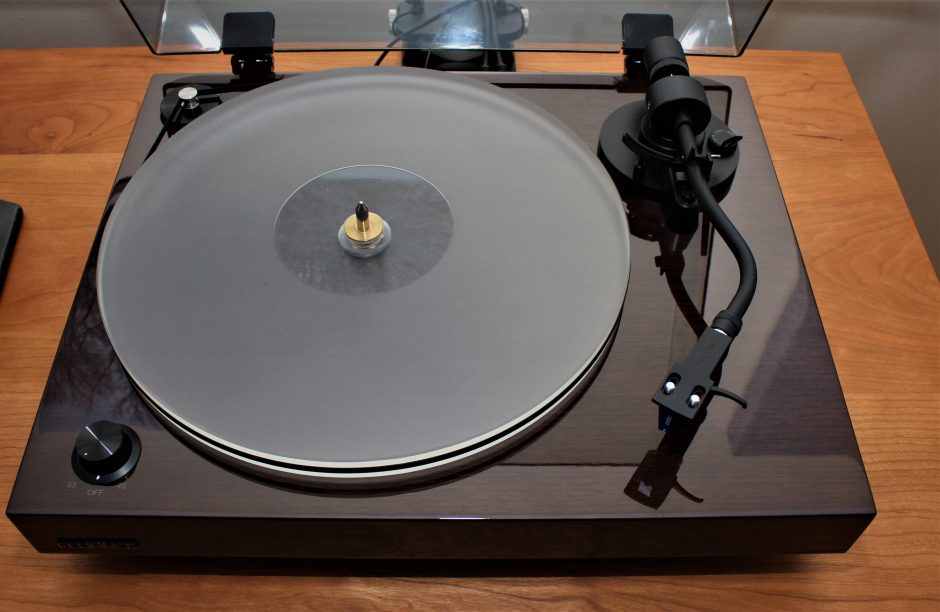 The Fluance RT85 Reference turntable retails for $500. That’s very important to me from a historical standpoint, so allow me to elaborate.

I came up with the $500 Rule for turntables back in 1998, during the early days of my original Vinyl Anachronist column for Perfect Sound Forever. The $500 Rule states that “you have to spend about $500 to get a turntable that out-performs every mass-market CD player out there.” This, of course, was back in those dark, almost medieval years when most music lovers thought CDs sounded way better than scratchy old LPs, and the only suitable response to the idea that vinyl still sounded better was derisive laughter and finger-pointing.

I picked the $500 figure because that was the retail price of the Rega Planar 2 at the time. That was my recommendation for an entry-level player, the absolute minimum you needed to buy before you could say yes, LPs do sound better than the little silver discs. I heard many record players that retailed for less, but none of them sounded convincing enough to make my point about analog superiority. At the time, my only exceptions were vintage turntables such as Duals, Garrards and ARs that were still in perfect working condition. Taking that route often led to additional headaches and a keen desire for the simplicity of the average compact disc player.

So where are we in 2020? Does the $500 Rule still apply? The current iteration of the Planar 2 retails for $675, complete with the Rega carbon phono cartridge. It’s still a very good turntable for the price, especially if you grab a more interesting cartridge such as an Ortofon 2M Red or Blue.

Over the last few years I’ve heard a number of entry-level turntables that retail for $500 or less, and some of them actually sound okay. Not great, but possibly good enough to persuade a vinyl newbie that playing vinyl is a fun and worthwhile endeavor, and better than buying something that’s completely made of plastic. That’s why I decided to review the Fluance RT85 Reference turntable. That $500 MSRP leapt off the page of the Fluance email. 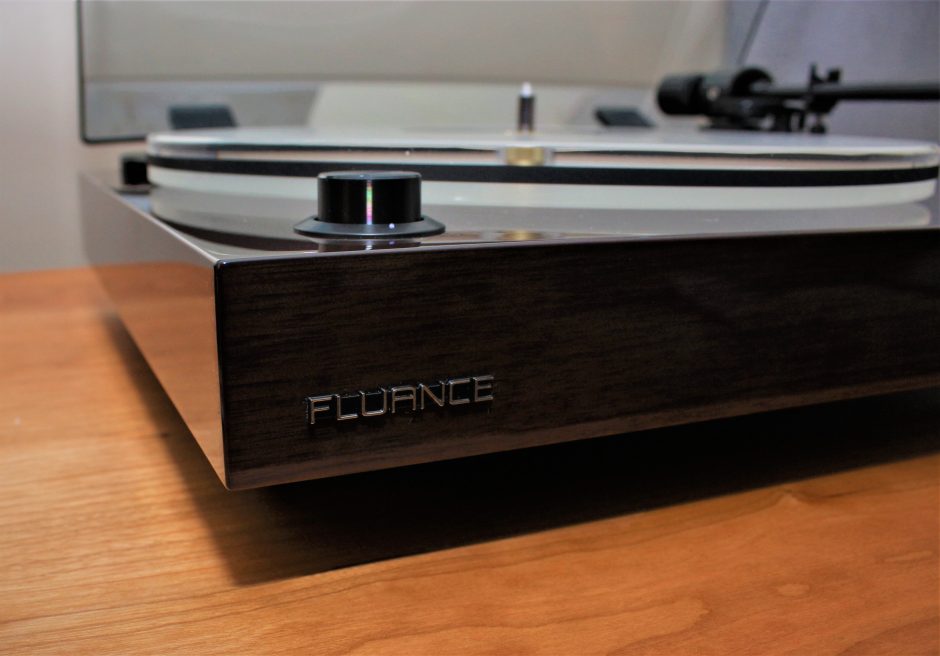 Fluance, if you don’t already know, is a Canadian company that has specialized in affordable products—most notably a line of small speakers that have garnered decent reviews. They’ve been in the turntable game for a few years now, with designing and engineering done in-house in Canada with manufacturing outsourced to the same Taiwanese company that has manufactured some of the entry-level Thorens ‘tables. They received even more favorable press for these models that start at a mere $250. The belt-drive RT85 is their flagship, arriving with the busy and ambitious moniker of the Fluance RT85 Reference High Fidelity Vinyl Turntable.

The RT85 comes with a number of improvements over the less expensive models such as an acrylic platter (more on that later), speed control motor, a solid wood plinth (MDF inside, a beautiful walnut veneer outside) and a set of rubber isolation feet. What’s simply incredible is that it includes that Ortofon 2M Blue—the same one I’d tell you to buy if you bought someone else’s entry-level ‘table and wanted to improve its performance to beyond the mundane. I’ve had plenty of experience with the 2M Blue over the years—it was the first cartridge I mounted on the original Technics SL-1200 that suggested that this popular ‘table could be, at the very least, listenable to audiophile ears.

Here’s what’s incredible—the Ortofon retails for $236 on its own. That’s right, nearly half of the cost of the Fluance RT85 is sunk into the cartridge. Does that mean the actual ‘table is a cut-rate affair? Surprisingly, no. The RT85 is small, compact and relatively light compared to more expensive turntables, but it’s surprisingly solid and hefty compared to others at this price point. In addition, it’s attractive and possesses a nice fit and finish, and its operation, for the most part, is solid and user-friendly. 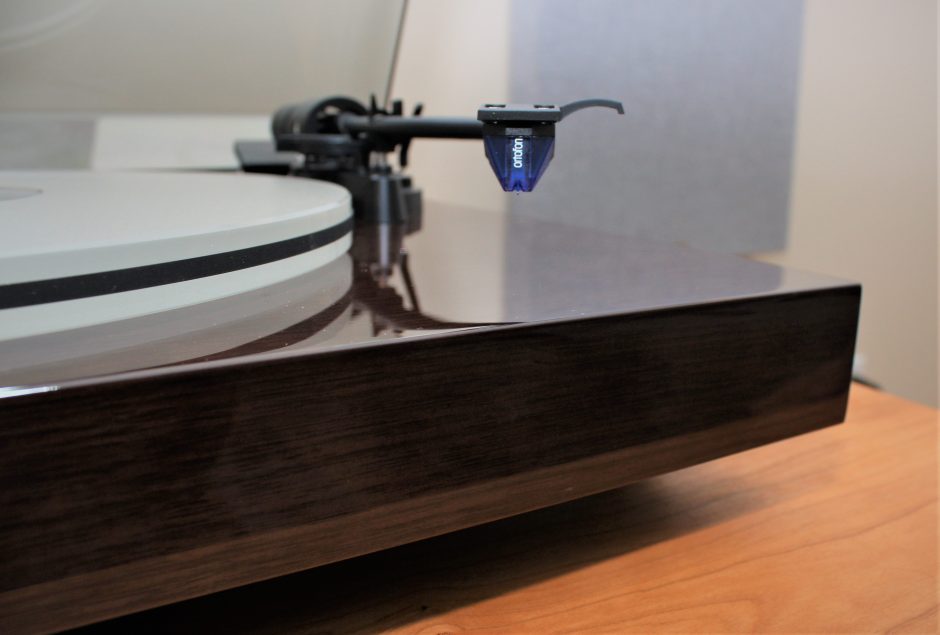 At this price point, most turntables out there are as close to plug ‘n’ play as possible. The cartridges are aligned at the factory, and the most technical chore that’s usually asked of the new owner is to apply a drop of oil on the bearing before setting the platter. In this regard, the assembly of the Fluance RT85 was straightforward.

My only quibbles during this process were brought on by myself, the turntable guy who doesn’t look at the owner’s manual until he gets into deep doo-doo. I spent an inordinate amount of time looking for the platter mat, going as far as sending an email to Fluance asking them to ship one out. That’s when I remembered that the RT85 is the only model in the line-up with the acrylic platter, and a mat isn’t necessary. The owner’s manual, much to my chagrin, refers to all of the Fluance ‘tables and it kept mentioning the mat.

Okay, that one was my fault. The other quibble, however, probably deserves the attention of the designers. The dust cover hinges are made of relatively thick and stiff plastic, and the edges of the dust cover don’t glide right in like they do with a Rega. I had to apply serious pressure to get the lid to slip into the hinge, enough so that I could easily imagine breaking off a chunk of acrylic. Assembling a dust cover shouldn’t make you think of the phrase “something’s gotta give.”

I had only one more reservation. I found that the Fluance turntable can be vulnerable to footfalls compared to much more expensive designs, even considering those nifty rubber feet. I’ve used a lot of turntables in the last year, some with complex suspensions and some without. I found myself tiptoeing around the Fluance when the needle was in the groove. Between the rubber feet under the plinth and the rubber isolation pucks in my Fern & Roby rack, there should be plenty of isolation so perhaps my suspended wooden floors are getting sketchy. (Good thing I’m moving this summer.) If you’re going to consider the Fluance RT85, you might need a wall shelf or an additional isolation platform. If you have a concrete slab floor, however, proceed with confidence. 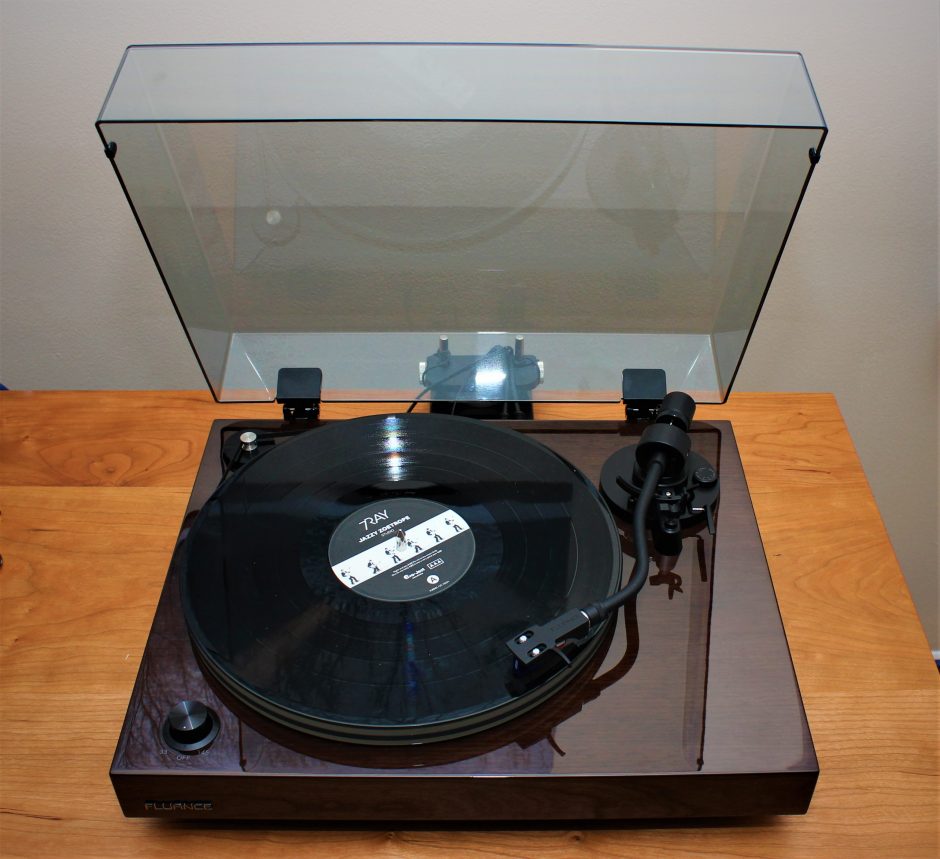 Let’s be honest for a second. I’ve been incredibly spoiled over the last couple of years—Technics SL-1200G, Dr. Feickert Analogue Firebird, Palmer 2.5i, Fern & Roby Montrose. My first impression of a $500 turntable—any $500 turntable—is going to focus on what it doesn’t do.

Compared to those turntables—the most affordable one is eight times the cost of the RT85—the Fluance came up short in soundstage size and inner detail. Over time, I started noticing the lack of quiet that you get with a substantial, high-mass ‘table. With my ears close to the speakers, I could hear the motor noise.

But are these fair comments? My main reason for reviewing the Fluance was to see if it complied to the $500 Rule. Does it sound good enough to divert you from cheap CD players and MP3s? Of course it does. That’s a very low bar. We audiophiles can laugh and joke about $500 turntables, but the average vinyl newbie thinks that $500 is a lot of money. Most of them think it should cost a hundred bucks or so, two hundred tops. But $500? What’s it made of, platinum?

Let’s scrap the idea of $500 Rules and everything else for a minute and ask ourselves if the Fluance delivers music. While the overall sound of the Fluance/Ortofon rig was a bit lightweight, it excelled at imaging right off the bat. With Cannonball Adderley’s classic Somethin’ Else, the shimmer of Art Blakey’s magnificent cymbals floated out into the room in a wonderfully wide, panoramic manner. With 7Ray’s Jazzy Zoetrope, the first album from the new record label from Pro-Ject, the spaciousness of the venue was intact with only a slight shortening of depth. I even pulled out my old vinyl copy of King Sunny Ade’s Synchro System, which has layer after layer of percussion, the Fluance RT85 was able to separate all of the performers and reveal their precise locations in the studio.

Tonally, the Fluance RT85 remained true to the source. While I mentioned the absence of the innermost detail in complex recordings, individual sounds were presented naturally and with a minimum of colorations. How much of this was due to the Ortofon 2M Blue? Probably a great deal. But credit goes to Fluance for designing this turntable around a cartridge that I think is the finest $200 high-output moving magnet ever made. 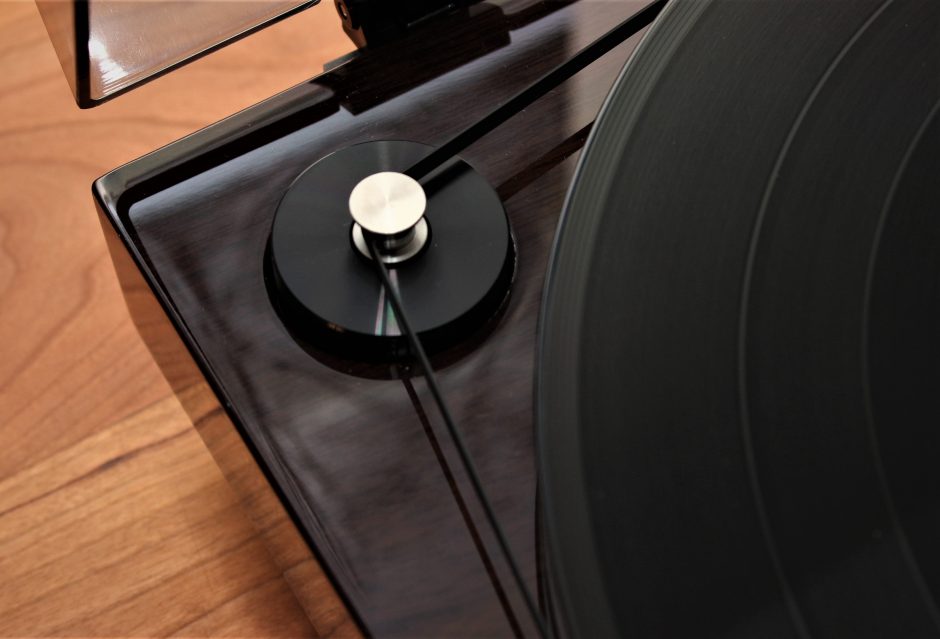 There’s only one question to answer here, and that’s whether the Fluance complies with the $500 Rule. It does. These days there are a lot of choices at this price point, and many of them don’t receive my budget recommendation. Some are cheap and flimsy and wobbly—the Fluance isn’t. Some of them yield a woefully small and finite sound that won’t inspire vinyl newbies—the Fluance does.

For over twenty years I’ve been making turntable recommendations for those who haven’t been desensitized by high-end audio prices. It’s not an easy thing to do. As no-frills as the Fluance RT85 is, it gets the basics right and not once did I regret the time I spent with it. That’s not damning with faint praise—I’m genuinely excited that there’s a new option for those who just want to play records without diving into that glorious rabbit hole the rest of us know all too well. 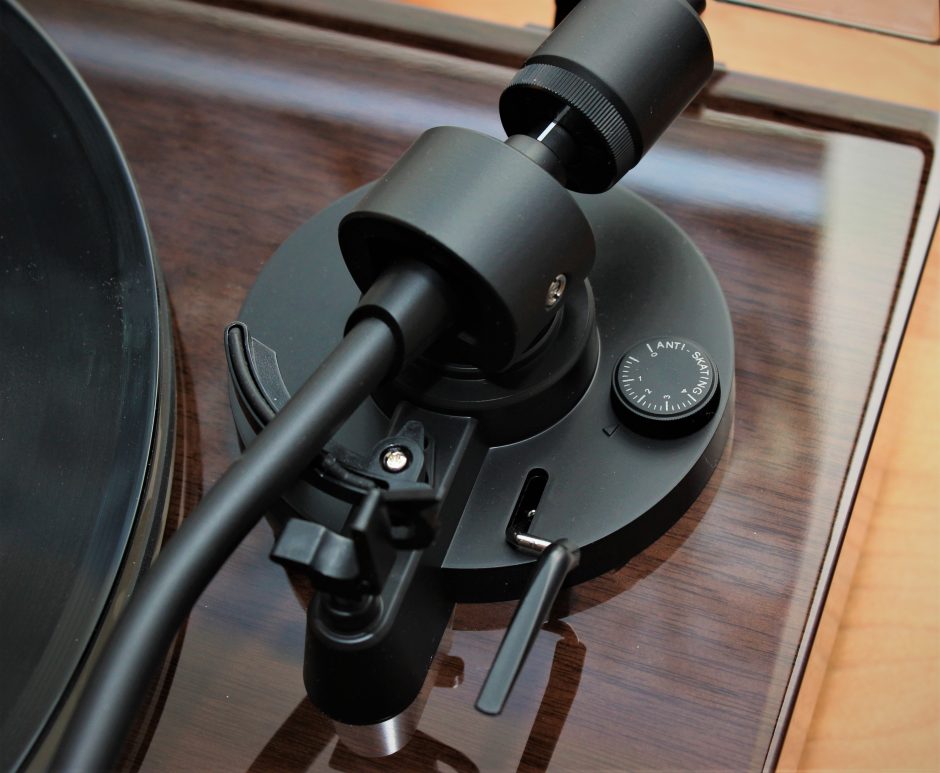 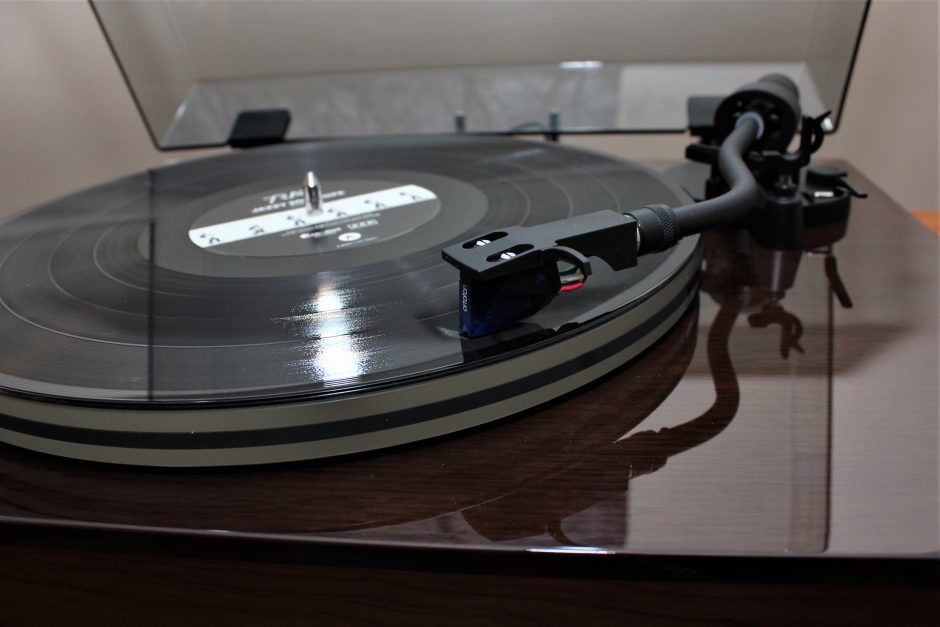 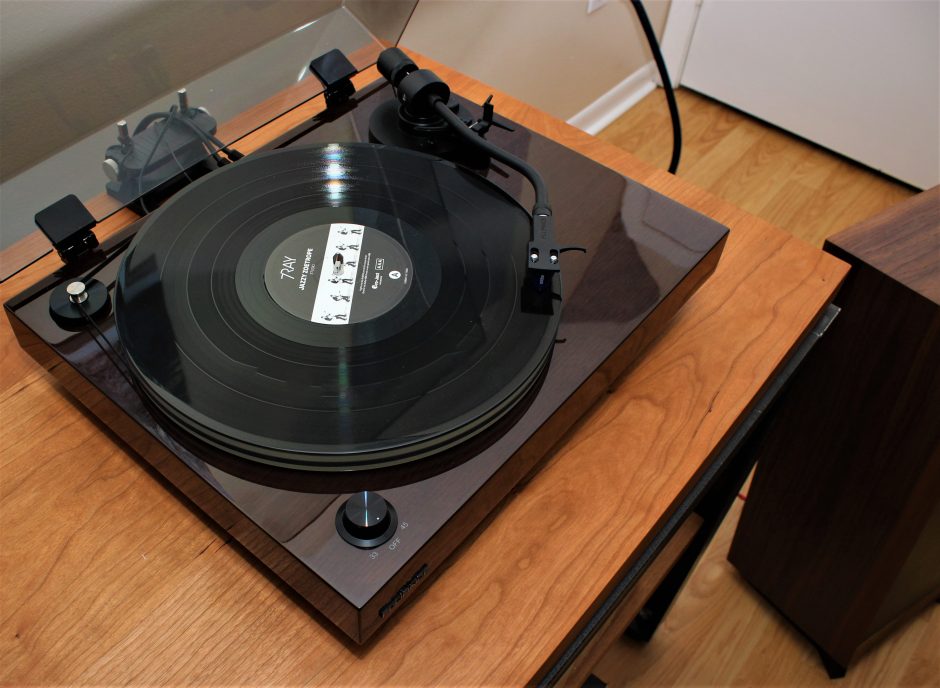 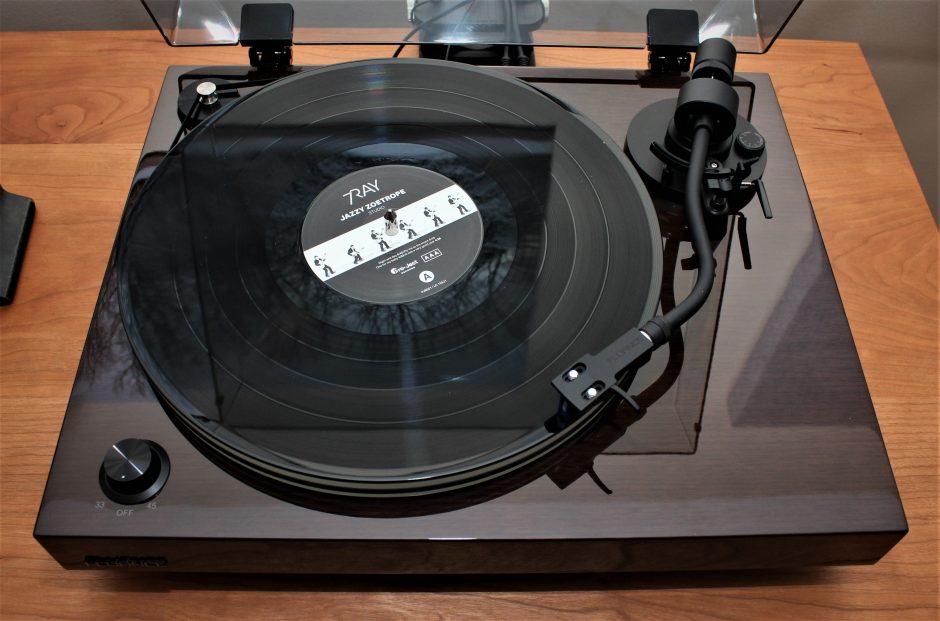 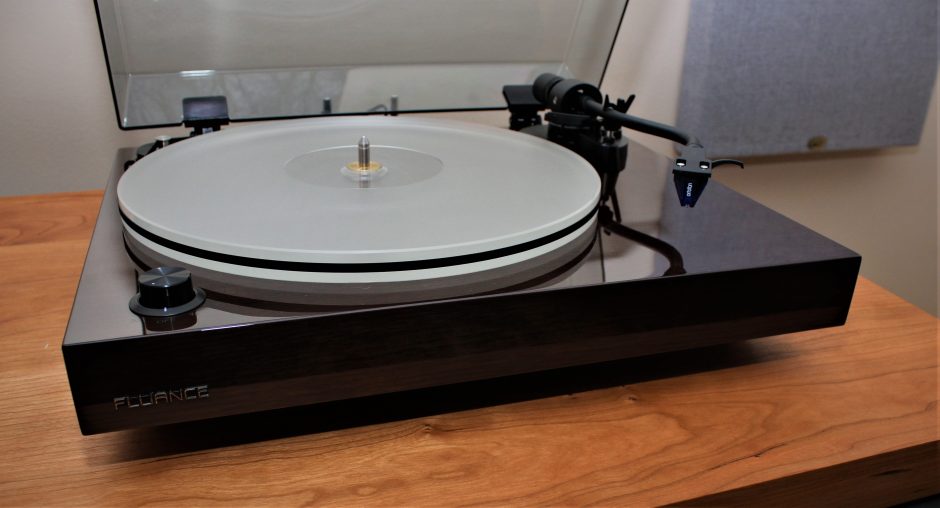 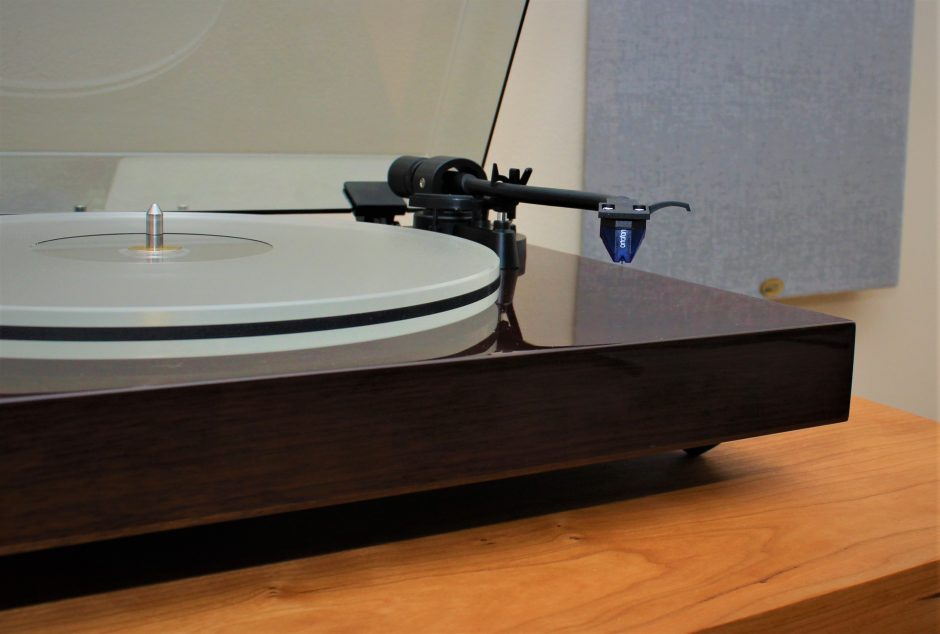 Welcome to your completely unnecessary and wholly unsolicited Part-Time Audiophile guide to the holidays, Part 2 of a bazillion. You’re welcome. Vinyl Affordable vinyl is not impossible, but it is not a given either. You […]