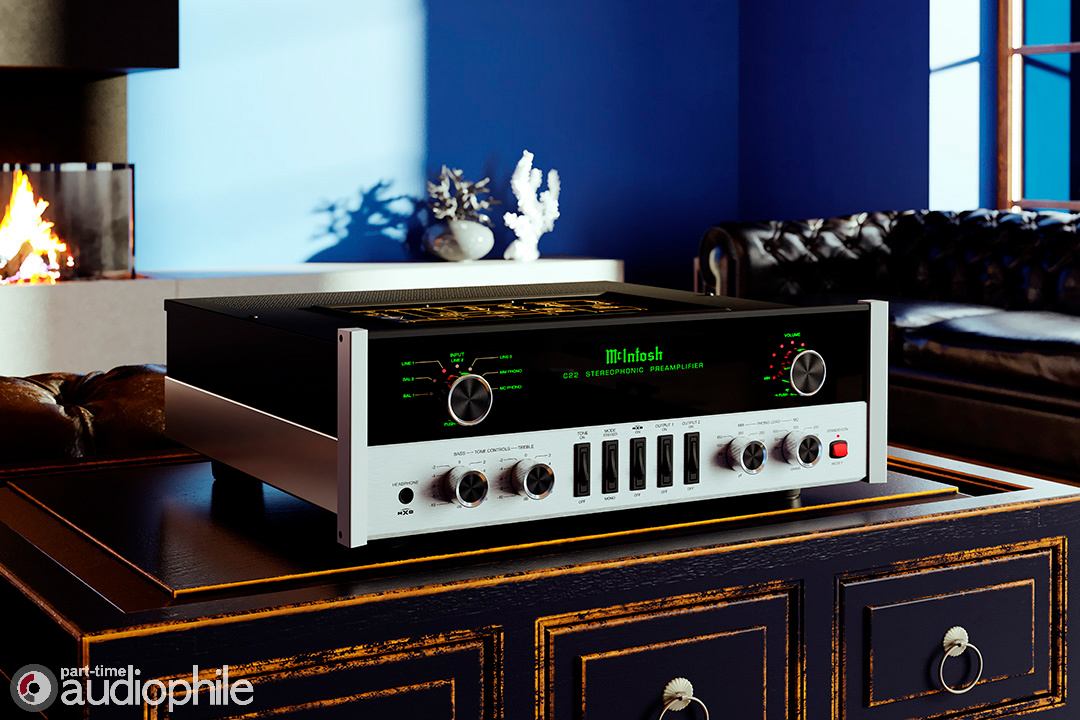 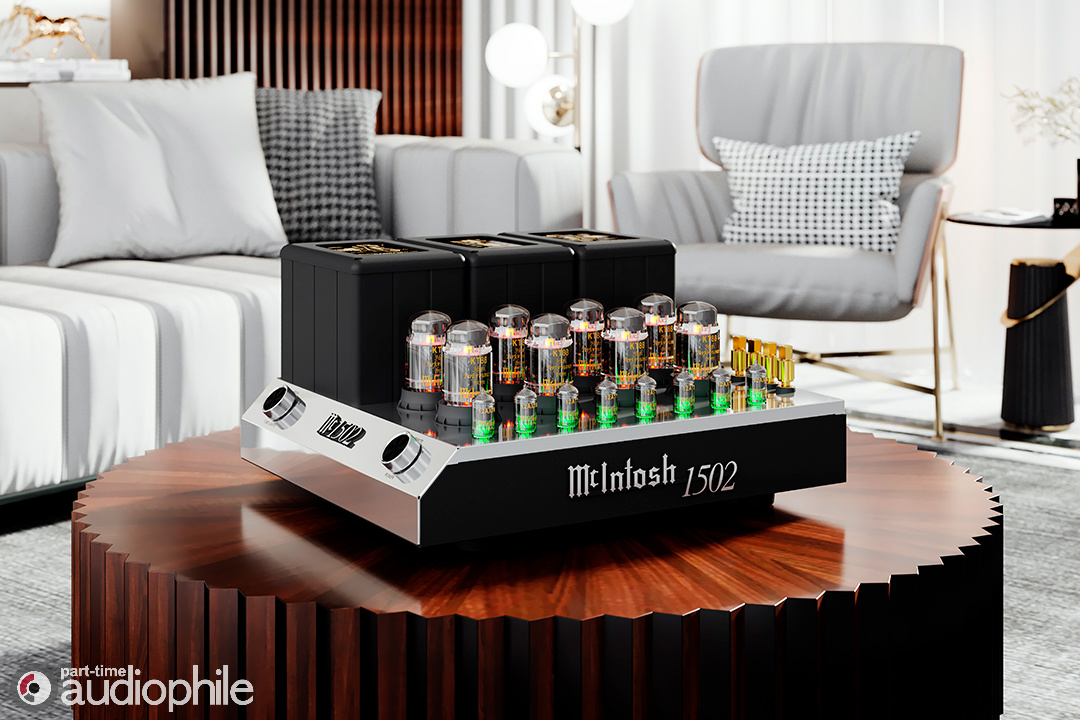 A Classic. Supersized. & The Newest Take on a Classic. 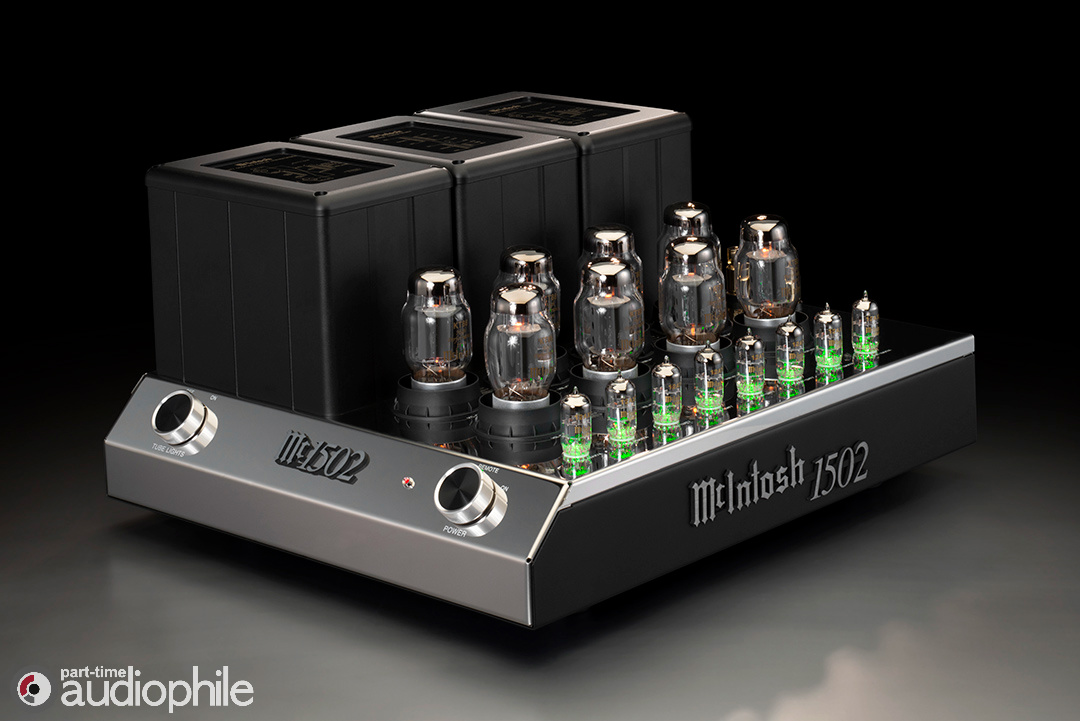 The new McIntosh MC1502 Vacuum Tube Amplifier is a stereo amplifier designed for home audio and home music systems that produces 150 Watts per channel. It is the direct replacement to McIntosh’s award winning MC2152 Limited Edition 70th Anniversary Vacuum Tube Amplifier, which had a limited production run in celebration of their 70th Anniversary that occurred in 2019. The new MC1502 has identical audio specifications and sound reproduction performance of the heralded MC2152 but in a more customary McIntosh design.

The MC1502 shares the timeless styling of their classic MC275 Vacuum Tube Amplifier. As the MC1502 has twice the stereo power rating of the MC275 (150 Watts vs. 75 Watts) and is physically larger, in many ways it can be considered the MC275’s big brother. And while a pair of MC275s can be run in mono to achieve the 150 Watts per channel output of the MC1502, the MC1502 boasts a better signal-to-noise ratio of 112dB vs. 105dB for the MC275 pairing – producing an even quieter performance than the already quiet MC275.

The KT88 vacuum tube sockets include Air-Pipe cooling at their bases to help facilitate long service life. The eight signal tube sockets have ceramic base construction with gold plated contacts, providing protection from atmospheric contamination. All the vacuum tubes sit atop the precision formed stainless steel chassis polished to a mirror finish. McIntosh’s Sentry Monitor™ technology monitors the output current and shuts the amplifier off if it ever exceeds safe limits; the signal tubes will flash red if Sentry Monitor is ever activated. 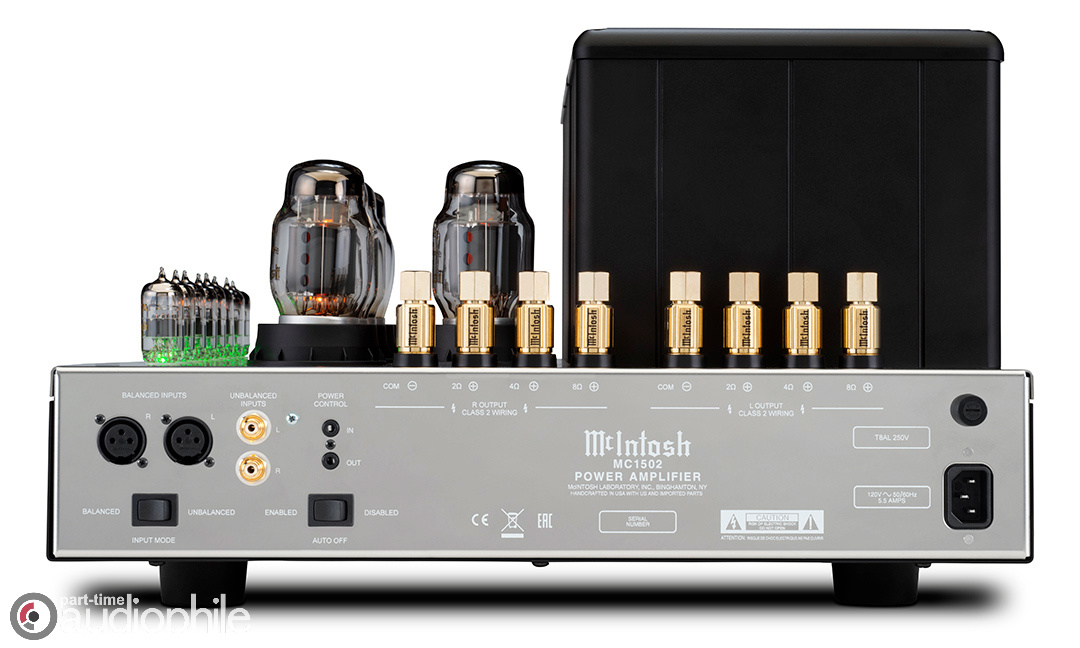 Unlike many other amplifiers, the MC1502’s full 150 Watts can be delivered to almost any pair of speakers regardless if they have 2, 4 or 8 Ohm impedance. This is thanks to McIntosh’s patented Unity Coupled Circuit output transformer technology – the same technology McIntosh was founded on in 1949. Two Unity Coupled Circuit output transformers flank the power transformer which is positioned between them. Each transformer is housed in a glass topped extruded enclosure that displays the wiring diagram for each transformer. Two fully spelled out vintage die cast aluminum name badges adorn two sides of the MC1502, while an abbreviated badge is centered between the Tube Lights and Power knobs.

Both balanced and unbalanced inputs are included to connect the MC1502 to your preamplifier and the rest of your home audio system. McIntosh’s patented Solid Cinch™ speaker binding posts will securely connect your speaker cables to your speakers. An input and output for McIntosh’s Power Control technology allows other connected McIntosh components, such as preamplifiers, CD players, turntables, or media steamers, to automatically turn on and off.

Orders for the MC1502 can now be placed with Authorized McIntosh dealers with shipping expected to begin in August 2020. Suggested retail price (VAT, shipping and any customs duties related to current standards of individual countries are excluded): $11,000 USD

This newest version of the McIntosh C22 Vacuum Tube Preamplifier – the Mk V – is the direct replacement to their highly regarded C70 Limited Edition 70th Anniversary Vacuum Tube Preamplifier, which had a limited production run to commemorate their 70th Anniversary that took place in 2019. The new C22 Mk V is the latest McIntosh vacuum tube preamplifier to carry the cherished C22 model number. It has all the performance of the acclaimed C70 but with the hallowed C22 moniker and its signature glass and aluminum front panel design.

The C22 Mk V uses one 12AT7 and five 12AX7A vacuum tubes which can be seen through a glass panel located on the top of the preamp. Knobs and rocker switches operate all control functions while modern LED lights indicate input selection and volume level. The C22 Mk V has two balanced inputs, three unbalanced inputs, one Moving Coil and one Moving Magnet phono inputs, for a total of seven inputs. There are two pairs each of balanced and unbalanced output connections; the two outputs allow sending signals to two separate power amplifiers.

Bypassable bass and treble tone controls are located on the front panel and can be adjusted in 2dB increments via rotary knobs. Impedance and capacitance for the phono inputs can also be adjusted via separate rotary knobs. In addition to setting the listening level, the volume knob can also be used to adjust the relative volume balance between the left and right audio channels. The ¼” headphone jack is powered by McIntosh’s High Drive headphone amplifier and features their Headphone Crossfeed Director (HXD®) technology. HXD improves the sound localization for headphone listening by restoring the directionality component of the sound stage that’s normally only heard from loudspeakers.

McIntosh’s Power Control technology is included with four ports that can automatically turn other connected McIntosh components such as amplifiers, CD players or turntables, on and off. Data ports are also present and can control basic functions of connected McIntosh source components via the included remote control.

The C22 Mk V sits atop a stunning polished stainless steel chassis and features the timeless McIntosh illuminated logo, control knobs, and aluminum end caps. With its retro black glass and aluminum front panel design, the C22 Mk V will fit right in with McIntosh home audio systems of any era – from the 1950s to current day.

Orders for the C22 Mk V can now be placed with Authorized McIntosh dealers with shipping expected to begin in August 2020. Suggested retail price (VAT, shipping and any customs duties related to current standards of individual countries are excluded): $6,000 USD

Founded in 1949, McIntosh Laboratory, Inc. is known for offering distinguished quality audio products, superior customer service and the ultimate experience in music and film. All McIntosh products are handcrafted at the Binghamton, NY factory by over 150 employees with a passion for music and the McIntosh heritage. McIntosh continues to define the ultimate home entertainment experience for discriminating consumers around the world, with the iconic “McIntosh Blue” Watt Meters globally recognized as a symbol of quality audio. Since its inception, McIntosh has been powering some of the most important moments in music history and pop culture. From President Lyndon Johnson’s inauguration speech to Woodstock to the famous Grateful Dead “Wall of Sound,” McIntosh has not only witnessed history, it has shaped it. With McIntosh, customers have the ability to create their own premium audio experience – and truly live their music. Visit www.mcintoshlabs.com to learn more.

Tubes going in, and tubes going out Honey, they’ve shrunk the MC275 (or recently reviewed MC1502) and made it for driving headphones. If that’s not exciting news, what is? The McIntosh MHA200 is an all […]

Big power comes to two new integrated amplifiers from McIntosh Labs. With expanded headroom thanks to increased filter capacity the new MA9500 and MA8950 build on the success of the award winning (and outgoing) MA9000 […]

Iconic blue meters. Warm, full, powerful sound. That’s what Mac means to me. This time out, we’re getting treated to an update/upgrade to the monoblock MC601 power amps. Want to hear what 600 watts can […]