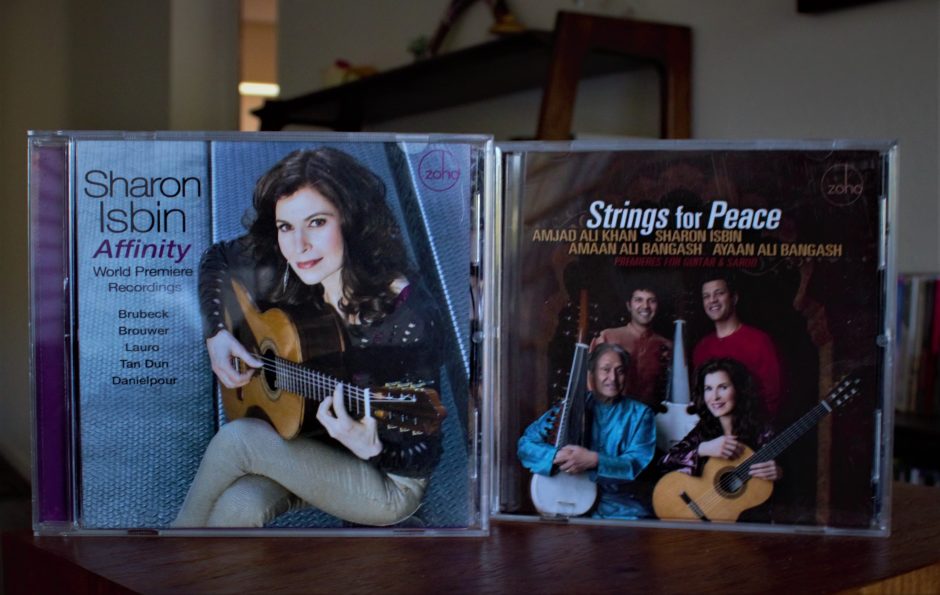 This isn’t the first time I’ve seen a performer release two or more albums simultaneously–I still have my LP copies of Ace Frehley, Peter Criss, Paul Stanley and Gene Simmons around here somewhere. It’s also not surprising when the two albums are very different from each other–otherwise, why not just release a double album? But it’s rare when I see two recordings featuring the same artist exploring very different genres, as is the case with guitarist and multiple Grammy winner Sharon Isbin. Affinity contains four original works written for Isbin by four different composers in a classical setting with the Maryland Symphony Orchestra and mezzo-soprano Isabel Leonard. Affinity features Isbin playing ragas with three sarod players and a tabla drummer, all from India.

Affinity is the more ambitious of the two releases, with each of the four compositions revolving around Sharon Isbin and her glorious guitar, supported by the orchestra, led by conductor Elizabeth Schulze and a revolving cast of guest stars such as guitarist Colin Davin and Isabel Leonard. These four pieces are globetrotters of sorts–Tan Dun‘s Seven Desires for Guitar harboring strong Chinese folk influences, Leo Brouwer‘s El Decameron Negro focuses on Afro-Cuban influences, Venezuelan composer Antonio Lauro’s Waltz No.3 Natalia shows why he is considered the “Gershwin of South America” and finally Richard Danielpour’s Of Love and Longing, which transports the listener to Persia. It’s a heady mix of cultures, something you might only experience through 2L Recordings…or, of course, Zoho Records.

For me, Strings for Peace is a true reference recording–I have a lot of raga recordings in my collection, and this is the most gratifying among these epic improvisations and probably the best I’ve heard since Ry Cooder and V.M. Bhatt’s Meeting By the River from 1993. Each of the five musicians are clearly spaced, and it’s incredibly easy to focus on what each performer is doing. You can even hear the difference in the style of the three sarod players–Amjad Ali Khan, Amaan Ali Bangash and Ayaan Ali Bangash–and if I had more time and info I could probably learn to memorize each man and his sarod.

I’ve championed Zoho Music for some time now–they always pair great musicians (usually from South America) with fascinating ideas, much in the same way that 2L Recordings does. I’m always surprised by the sound quality of most Zoho releases, and I wonder why audiophiles haven’t embraced this record label. These two new albums from Sharon Isbin should change that, especially Affinity. These are rare guitar pleasures that should introduce a stunning guitarist to a world of music lovers.

Samuel Leipold and his album Viscosity reminds me of the first few times I tried to play guitar. My best friend had learned how to play when he was young, piano too. Every time I’d […]

My love for the classical string quartet has been neglected for the last few years. It seems like the only new releases I receive are occasional titles from 2L Recordings–otherwise, I hear little […]