See if this takes you back. There’s a device you can buy that you can plug into any AC outlet in a room, and it transforms the sound of your hi-fi system. Sound familiar? There was a time, twenty or thirty years or go, when these types of products—tweaks, as they quickly became known—popped up, made such outrageous claims, and were promptly skewered by the press and skeptics and alleged science guys and anonymous internet doofuses. Said companies would usually fade into the background and disappear (remember the Tice Clock?), and something new would come along in a few months and receive the same rough treatment. The Furutech NCF Clear Line AC Power Supply Optimizer sounds like it would be one of these products. Even the word optimizer suggests it. But it’s not.

I’m not the tweakiest audiophile in the world. I’m somewhere on the middle of the spectrum between insisting on effective isolation devices under my components and getting up and changing the VTA for every single record I play. (I. Must. Resist.) I even have a clear plastic storage bin somewhere in the house that’s filled with all the tweaks I’ve tried and rejected over the years. (I should really have a yard sale one day.) You know what’s not in that box? Anything from Furutech of Japan.

Especially the Furutech NCF products, which I’ve been using happily for the last few years.

Furutech is a unique company in the high-end industry because it occasionally releases seemingly “controversial” audio products that seem to irritate those audio skeptics who are ultimately send them off with their tails between their legs because there’s always real science behind their approach. Remember Furutech’s vinyl LP demagnetizer? I got into all sorts of ugly arguments on the internet forums defending that product. We had a unit on hand for testing and review, and we performed countless A/B comparisons with a sizable amount of people and there was no doubt we were hearing big improvements in both bass and soundstage size. It was the clearest A/B comparison I’ve heard, and many audiophiles still don’t believe it can work years after it was introduced.

The latest addition to the Furutech NCF family of products, the Clear Line, also made huge changes to the sound of my system. Obvious changes. It’s the easiest product in the world for A/B comparisons because you can quickly compare by plugging it in and quickly unplugging it. I wish comparing phono cartridges, or anything else in audio, was this easy. 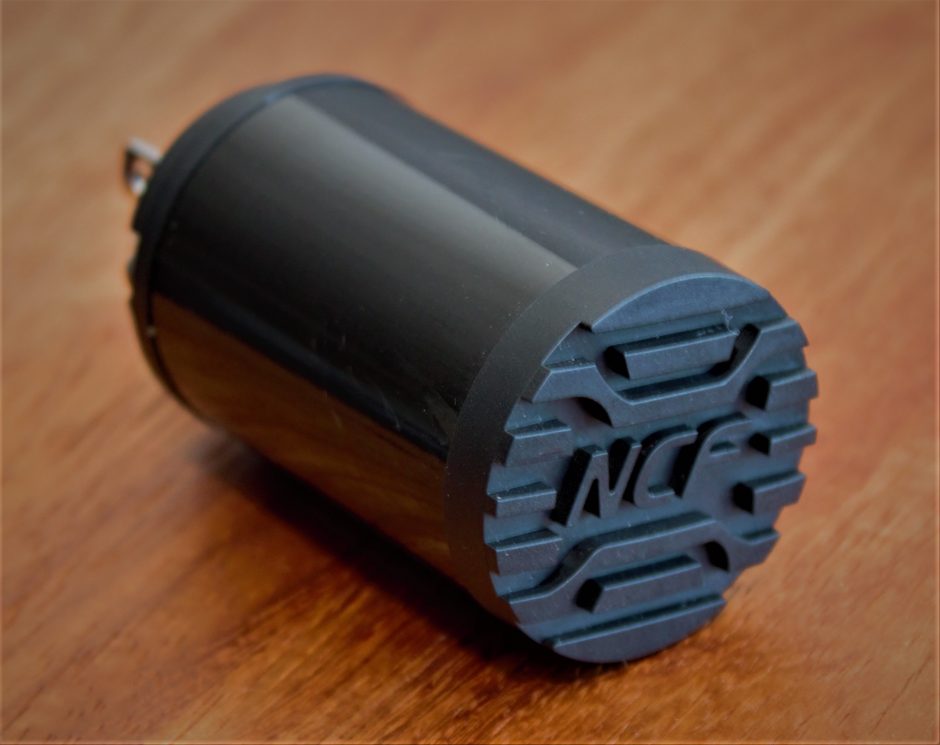 I can make the Furutech NCF line of products sound kind of nutty, one of those “we sprinkle a bit of fairy dust in there before we screw in the top plate of the chassis and that’s what makes us so unique” kind of nutty. When you start researching their new Nano Crystal² Formula (NCF), there’s a fairly simple and straightforward scientific explanation for why it works.

Furutech NCF combines nano-sized ceramic particles and carbon powder, cryogenically treated so that it crystallizes. This material was developed through extensive testing in the Furutech labs in Japan, with the results confirmed through both measurements and listening. NCF is remarkable because it has two active properties—it generates negative ions that eliminate static, and it converts thermal energy into far infrared. This results in “piezoelectric effect” damping properties.

Here’s a helpful summary from Furutech:

The treatment begins during the manufacturing process with a deep, conditioning cryogenic freeze of all metal parts. Using high-end refrigerants — liquid N2 or He — Furutech achieves temperatures of between -196 to -250°C. The treated parts change their molecular structure at these extremes of temperature, relieving internal stress. The molecules bond together more tightly and the overall structure becomes more stable. This improves electrical conductivity and therefore power and signal transfer.

This is not the first time I’ve reviewed a Furutech NCF product. I reviewed the Furutech NCF Boosters, the inaugural product from the NCF line, for Positive Feedback a couple of years ago.  I’ve kept them in the system ever since. As I’ve said before in numerous reviews, it’s not a matter noticing big differences as you add these types of products but removing them all at once after you’ve been listening for an extended amount of time. At this point, I really don’t want to listen without Furutech NCF Boosters.

Here’s the potential problem, where my audio skeptic emerges and thinks “Hey just a minute there, bub.” The Furutech NCF Clear Line is just too easy, too simple. You merely plug it into any AC outlet in the room, the house, wherever. The closer it is plugged into the mains for your system, the stronger the effect. Optimal placement, I discovered, was directly into an unused AC socket in any power conditioner.

Can sonic bliss really be this effortless? 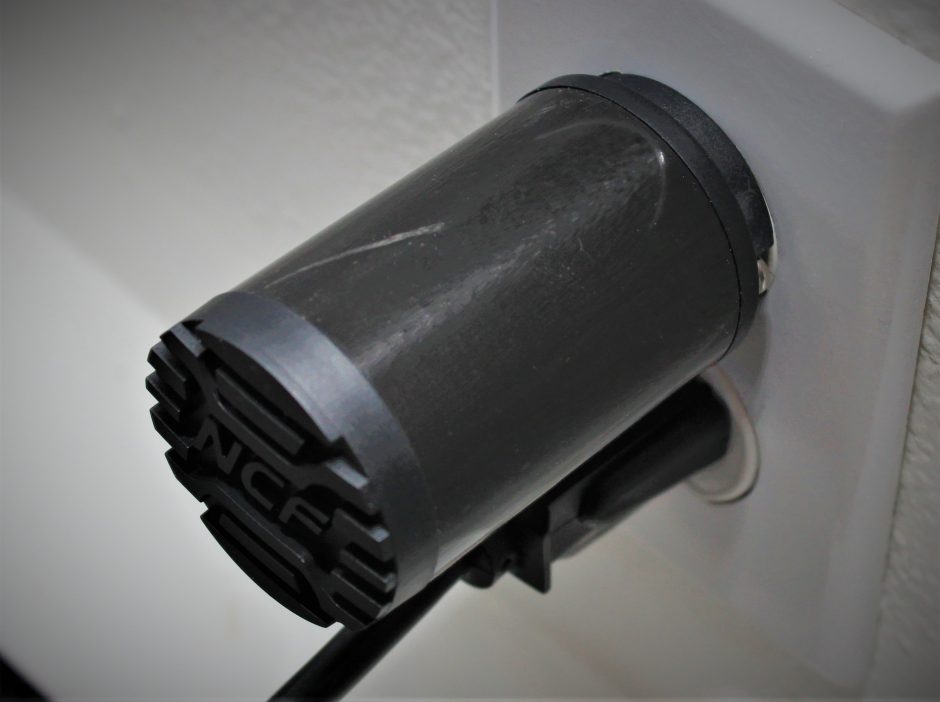 Well, it’s a little more complicated than that. When I first plugged the Furutech NCF Clear Line into the same AC power duplex as the Audioquest Niagara 3000 power conditioner, I heard big differences. Amazing differences. Everyone can hear these differences. My 87-year-old mother, who’s a little hard of hearing, would jump up and ask “What happened? What’s going on? What did you do?”

There was only one small problem. This was clearly a case—and it happens a lot in this hobby—when “different” doesn’t necessarily mean “better.” Everything sounded quieter, true, but I also noticed a slight diminishing of soundstage width. The NCF Boosters opened everything up when I first tried them, but the Clear Line seemed to sweep all that back into a smaller, neater pile. I kept going back and forth. I wanted the Clear Line to take me to new NCF heights, and it just wasn’t happening. I was kind of bummed—this was the first time I’ve been disappointed by a Furutech product.

I talked to Graeme Coley of Furutech in Japan, and he came up with a few suggestions. I started reconfiguring the cabling of the system, and soon I was able to figure out why the Furutech NCF Clear Line wasn’t dazzling me.

I often have a lot of Furutech products in my system—power cables, interconnects, speaker cables, USB cables, a filtered power strip and a wide variety of plug-in filter devices that are designed go between components and power supplies. I have a total of 19 NCF Boosters in the system at any given time. Much of this gear was extremely important for me when I was an exhibitor and I had to solve a variety of room issues before the show opened. It usually took a particular combination of Furutech products to work in a particular situation. Sometimes it worked one way, sometimes another way, never the same. This has also happened each time I have moved in the last few years.

At no time was the answer “throw everything we have in there.” Too many filters and too many unknown variables often led to a deadening of the overall sound, mixed with a truncated soundstage. It’s like that moment when you add hang one too many room treatment panels on the wall in your listening room and the sound just collapses. I suddenly remembered all that, and I removed every single Furutech filter and NCF Booster from the system, and just used the NCF Clear Line. That’s when I discovered the true potential of this fascinating little device.

Now we’re cooking with fire, I thought. The same improvements I heard with all those NCF Boosters—with these devices, the more you add the better the improvement—I heard with the Furutech NCF Clear Line, but perhaps on a slightly smaller scale. That’s only fair when you add up the cost of 19 NCF Boosters and compare it to one NCF Clear Line. (Don’t worry, I’ll get to that in a minute.)

What is the NCF Sound? As I mentioned, NCF products seem to have a noticeable effect on the size of the soundstage, especially in terms of creating a convincing 3D effect. But I also hear the damping qualities of the NCF crystals, and how they work to reduce the noise floor. One of the best ways to test this is with a fairly noisy system, the kind where you can place your ear against the speaker and hear all sorts of crazy things going on. Adding the Furutech NCF Clear Line wasn’t quite like turning the volume down on those frequencies as with the Boosters—there was a longer delay for the NCF to transform the sound. It takes a few moments for everything to settle in and start sounding its best even though you still feel that jolt of change when you compare.

Over time, I gradually added the NCF Boosters back in the system one by one and I was able to fine tune the NCF effect to my liking. It wasn’t all 19, but maybe half that amount, and no filters connected to the power cords.

Once I felt satisfied with the Furutech NCF Clear Line sound in my slightly pared-down reference system, I had an idea. I’ve just received two lifestyle products for review—the Andover Audio Model One Record Player and the Naim Mu-so 2nd Generation. Neither of these products represent a typical two-channel set-up, and both are about creating great sound in a small place. This is where the NCF effect really blossomed, which leads me to think that the Clear Line isn’t quite the comprehensive treatment that 19 NCF Boosters are—nor is it meant to be.

If you have a lifestyle system, something that was meant to make you happy in lieu of a dedicated and properly set-up listening room, it’s so easy to plug in the NCF Clear Line and immediately hear the improvements. If you’re still skeptical about NCF, I’m sure a Furutech dealer would be happy to come over to your house and perform those A/Bs for you. If you’re like me, you won’t be straining and squinting and pretending you hear a difference just so the dealer thinks you have golden ears. It will be obvious.

The Furutech NCF Clear Line Power Supply Optimizer is $249. (The Clear Line is brand new, so the price might not be set in stone yet.) It’s one of those products, like the $60 white belt from Rega and $85 The Cap body mod for the Denon 103, where you hold it in your hand and wonder why it costs as much as it does. Then you hear the effect such a product has on your system, and you say to yourself that this is the best $60/$85/$249 you’ve ever spent in audio.

If you’re still skeptical, it’s easy to ignore the sales pitches and the fawning over-the-top accolades and just try one. Real quick. Plug it in. Sit and listen. Unplug it. Listen again. I’m not going to argue with people who haven’t done the work, and I won’t approve any dismissive comments about crazy tweaks.

Just listen for yourself and decide. I’ve decided yes, and I’m keeping it. 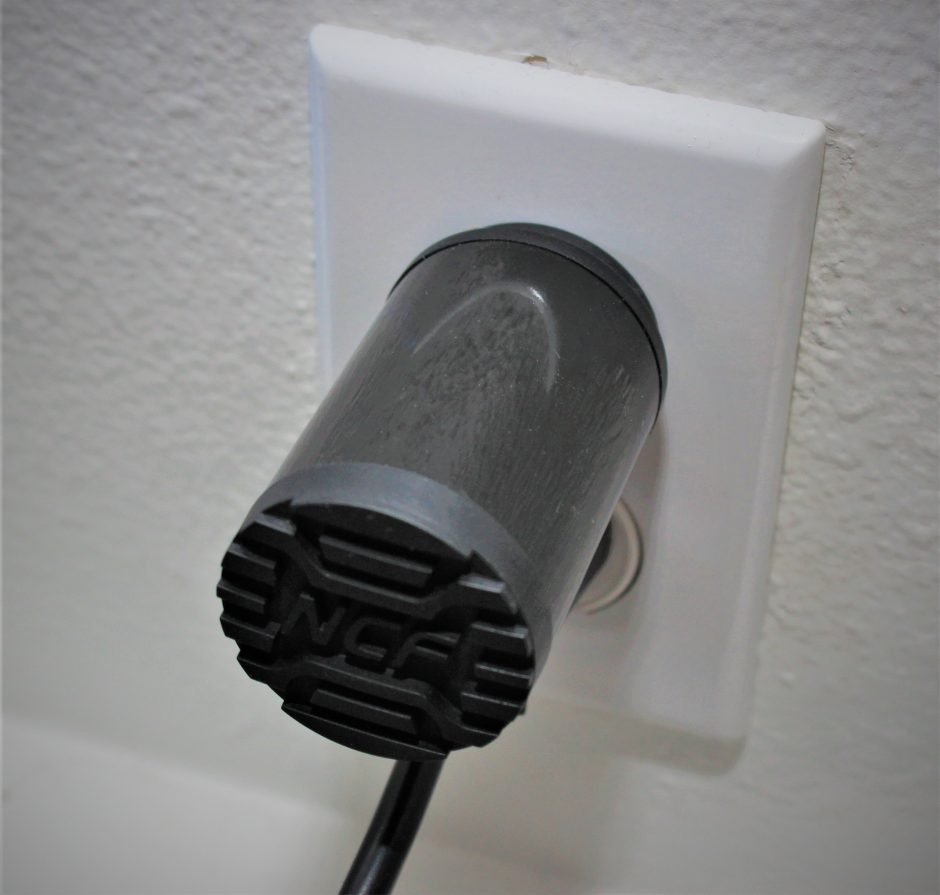 A funny thing happened on the way to finding the perfect 2-way bookshelf monitor. When I first had the opportunity to review the new Volti Audio Razz (announcement, website), I imagined this 3-way floorstanding horn […]

DVL Album of the Month for March: The Bee Gees

This is a monthly series of album reviews I will be doing for DVL Audio here in Canada. I’ll be heading out to a local record store in Vancouver, digging through the bins, and coming up […]