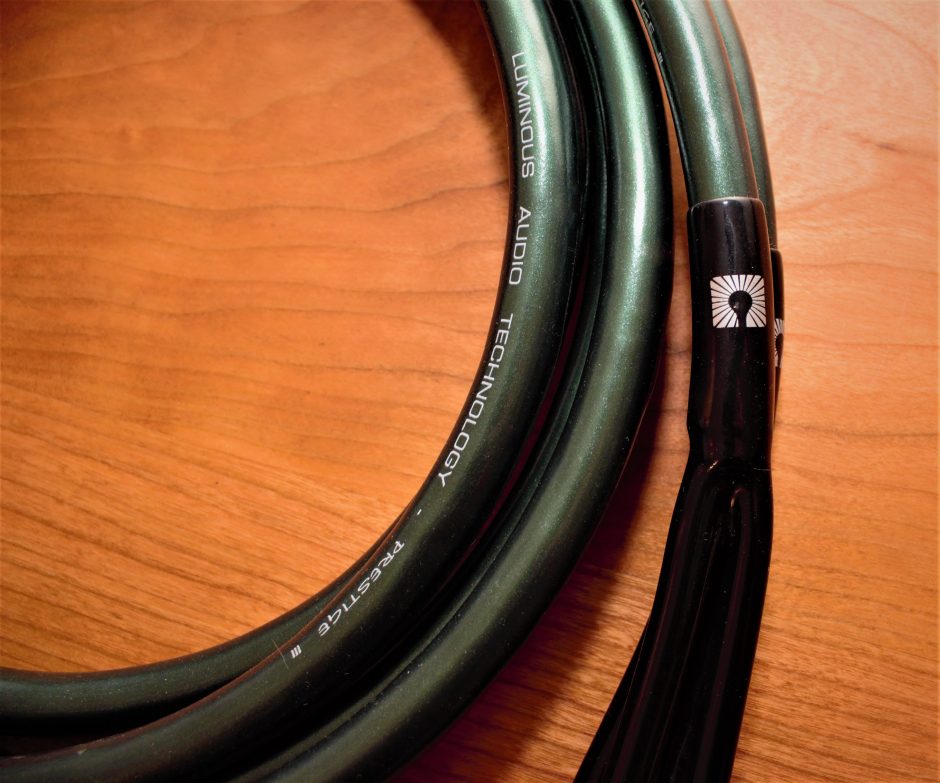 So I’m reviewing these Luminous Audio Technology Prestige III loudspeaker cables, ready to write down my impressions, and suddenly I remember that in my Raven Audio Soniquil cable review I spent all this time admonishing those who try to compare differences made by single cable swaps, as opposed to swapping out an entire loom.

I had to think long and hard about the answer. My instinct poked me in the shoulder and said, “You have heard differences, big differences between speaker cables in the past.” In the past I’d always tease those audiophiles who “put a $500 power cord in a $1500 system and then get mad when they can’t hear the difference.” It just doesn’t work that way.

But speaker cables? Yes, I’ve heard big differences while swapping out speaker cables. The first time happened back in college when I bought my first truly excellent pair of loudspeakers, the Snell Type J. This was back in the days when a hi-fi dealer would just throw in a set of speaker cables, usually unterminated, at no extra charge. I’d already made the decision to actually buy a set of quality speaker cables—a somewhat difficult task back in the early ‘80s when the very idea of such a product was considered frivolous. But I had heard things in the audio mags of the time, a slight and tentative buzzing in the background that suggested this was the next step in my audiophile apprenticeship.

The salesman knew the Snell Type J well—he said he owned a pair—and he had experimented with plenty of cables from the store. Since the Type Js were bi-wireable, the first speakers I owned that were, he recommended the original Monster Cable on the woofers and Kimber Kable 4TC on the tweeters. Since I didn’t know about the importance of keeping cable lengths short, I bought plenty of both and still probably spent less than a hundred bucks extra. Once I learned that long, uneven lengths of cable were a no-no, I chopped up the Monster and the Kimber into relatively short and even lengths. For some reason I decided to play around with different configurations and oh my god why does that sound so different? Let me switch back. Wow. I didn’t expect the obvious improvement when I switched to shorter runs of 4TC on all four drivers.

In other words, I had no expectations going in. I heard the differences clearly. Back then, it wasn’t a controversial idea. But a few short years later, it would be. At least I knew the truth going into the Cable Wars, right? 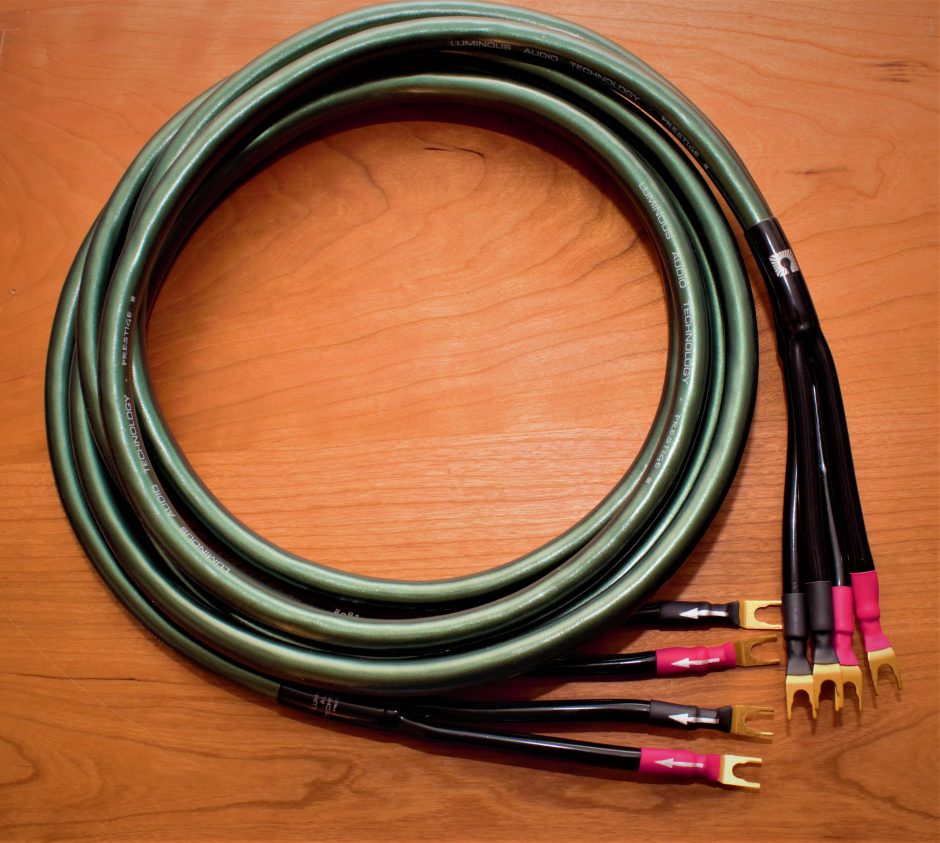 Many of you won’t agree, of course. We’re still having that “discussion” in 2020, that wire is wire and no one has been able to consistently tell differences in blind A/B comparisons. I can’t believe we’re still divided on this, especially since the high-end audio industry seems to be predicated on the idea that yea, cables make a difference. Then again, even the Raven Audio Soniquil review attracted some heated comments that never saw the light of day.

“For what I use to describe the topology would be a modified helical array. My design uses what I call an “isolated helical array” where in between each conductor is a “dummy” made of crushed polypropylene. This allows for even lower capacitance and reduced magnetic interaction between the conductors. The biggest difference in the new design is the use of polyurethane insulation on the conductors themselves. This took 20+ years of empirical design to realize. On paper it is better than PVC but not much else! However, ever since my Synchestra Signature ($40 per foot!), I keep going back to just how very well urethane works over everything else in copper speaker wire land.
“We have also been growing further and further away from these monster gauge cables. In the lengths we use 95% of the time, it simply is not necessary and the results are always more detail in the top and increased dynamics! Using multiples of 20g conductors to achieve an overall 14g is simply magic.”

In person, the Luminous Audio Prestige III loudspeaker cables have a nice fit and finish, one that reminds me of more expensive cables. I had Tim terminate an 8-foot pair with spades on both ends. Total cost for the pair: $188.

You read that correctly.

After reviewing the Raven Audio Soniquil cable loom, where no single set of interconnects, XLRs, USBs or speaker cables cost more than $200/pair, I’m starting to think there’s a revolution afoot in the world of cables based upon the scary idea that high-end audio cables don’t have to prompt sticker shock. “See that pair of speaker cables? They cost more than a BMW 3-Series!” Yeah, I don’t hear those types of comments as much as I did ten years ago. I think there’s a reason, like trickle-down tech or perhaps we’ve found a few shortcuts.

I’m sure the skeptics in the back in the room have an answer or two, something you’ve heard before, something that didn’t quite line up with your own experience. 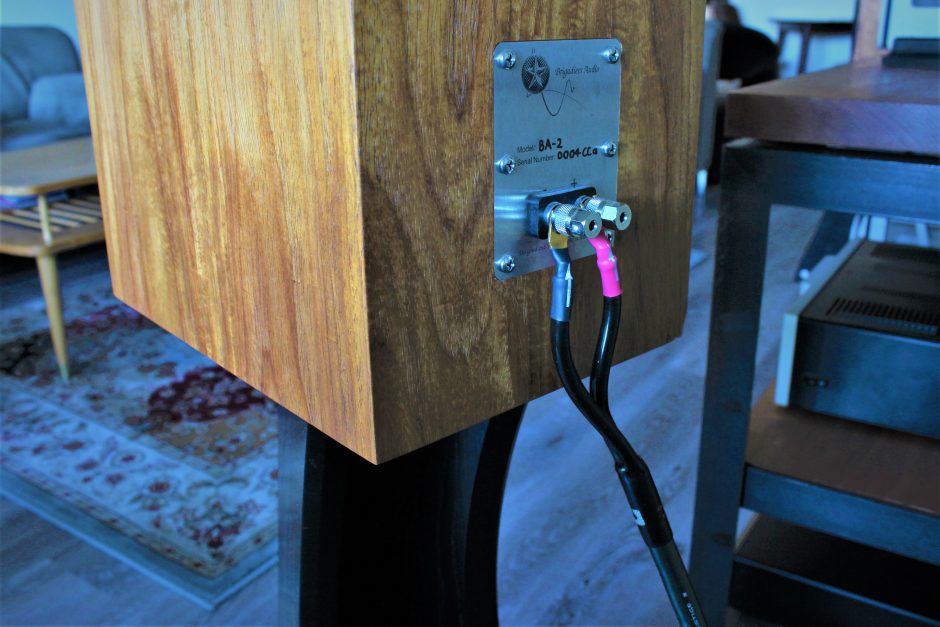 But in determining the sound quality of a single set of speaker cables like the Luminous Audio Prestige III, I’m going to have to introduce a modicum of rigor to the review process. We know how difficult it is to swap a new cable in and then try to observe any differences. It won’t work because the cables do have to break-in for some time. Not a lot, I’ve found, not like speakers, but still long enough to muddy the A/B waters.

I started by simply hooking up the Prestige III in my office system and letting the cables break in. At this point it’s not important to tell you the expensive cable that was replaced. I have several runs of speaker cables from multiple manufacturers, and my favorites are ten to twenty times the cost of the Luminous Audio cables. After I felt the Prestige III was fully burned in, I took a final listen to calibrate my ears, so to speak, to set a baseline. Since I always find the switchback—the point where you swap back to the old system configuration—to be far more obvious than the initial change, I relaxed and listened to the system and grew familiar with the small changes that the Luminous Cable brought to the system.

I did notice a change right off the bat, a slight shrinking of soundstage perimeters, and perhaps a little loss in detail. That seemed perfectly reasonable considering I was moving from a $3650 pair of speaker cables to, well…let’s just say that $188 doesn’t even cover the sales tax of my references. I then tried to forget about the more expensive cables and allowed my ears to adjust to the slightly altered sound.

After a few weeks, I stopped thinking about the Luminous Audio cable in my system. I had moved on. There wasn’t a single moment where I said, “If I only had my reference cables in the system right now, this would sound even better!” We’re actually talking about my own gear, my own system, the Brigadier Audio loudspeakers (or the Joseph Audio and Stenheims), Pureaudio amplification, Technics SL-1200G with ZYX cartridge…the stuff I’ve been listening to for several years in most cases. I know what this gear sounds like, especially when it’s all hooked up together. It is, after all, my sound.

During the review process there was no point where I recognized any shortcoming that could be laid at the feet of this $188/pair of cables.

When it was time for the switchback, an interesting thing happened. I heard the same differences the other way around. I heard more detail, and the soundstage expanded in all directions. Not a lot, but some. But the magnitude of that change was simply less when I removed the Luminous Audio Prestige III cables. I thought it was going to be a big A-ha! moment where the heavens parted and all was right in the world again, and yes, of course a $188 pair of speaker cables aren’t going to sound better or equal to something that costs as much as a middle-of-the-range Koetsu. 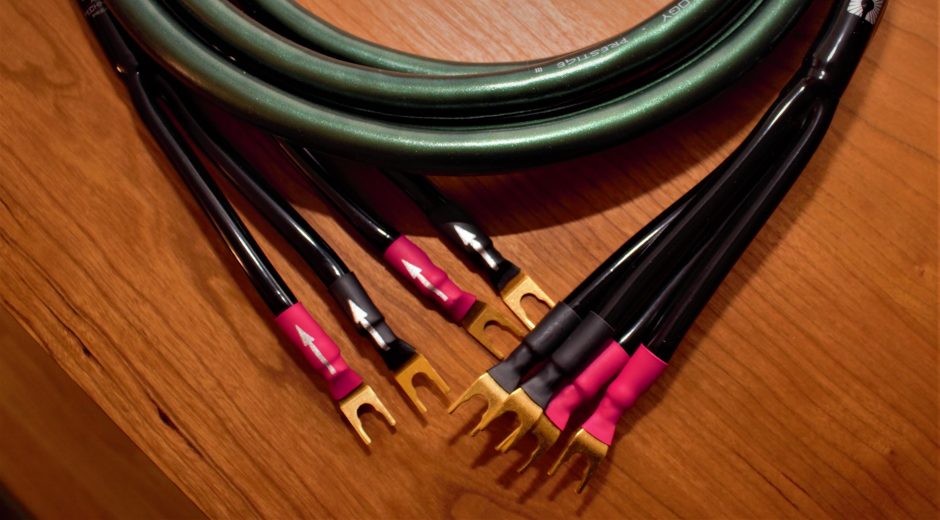 I’m not sure what my reference system told me about the Luminous Audio cable. It’s an incredible value? Sure. Should you use it in your six-figure system so you can save a few bucks and buy more records? Of course not.

That prompted the re-birth of my office system, the one I assembled to test and break-in review pieces and evaluate more modest components, like the Prestige III in the right context. At this point the second system is a mish-mash of components left over from my days as a distributor, and the components I used before that, mostly Unison Research amps and turntable and Opera speakers with Cardas Audio cabling. This office system is where the Luminous Audio cables really impressed me—they seemed right at home in a system that was still in the four-figure range.

This is where the comparisons fell away, as they should, and I was able to concentrate on what the Luminous Cable Prestige III contributed to the sound. I noticed one trait right away, a superb rendering of deep bass. During my time with the Prestige III cables, in both systems, I noticed a consistent and visceral presence at the bottom. In music reviews during this period I kept focusing on the bass and mentioning it. I often felt a sensation of the lowest octaves in music rolling out of the speakers, along the floor, and rising up to meet me smack in the middle of my chest.

Outside of that mesmerizing retrieval of low frequencies, I struggled to find a specific character in this smaller system. It occurred to me, after a while, that the Luminous Audio Prestige III cables are unusually neutral. That’s a heck of a compliment to pay a high-end audio product at this price point. 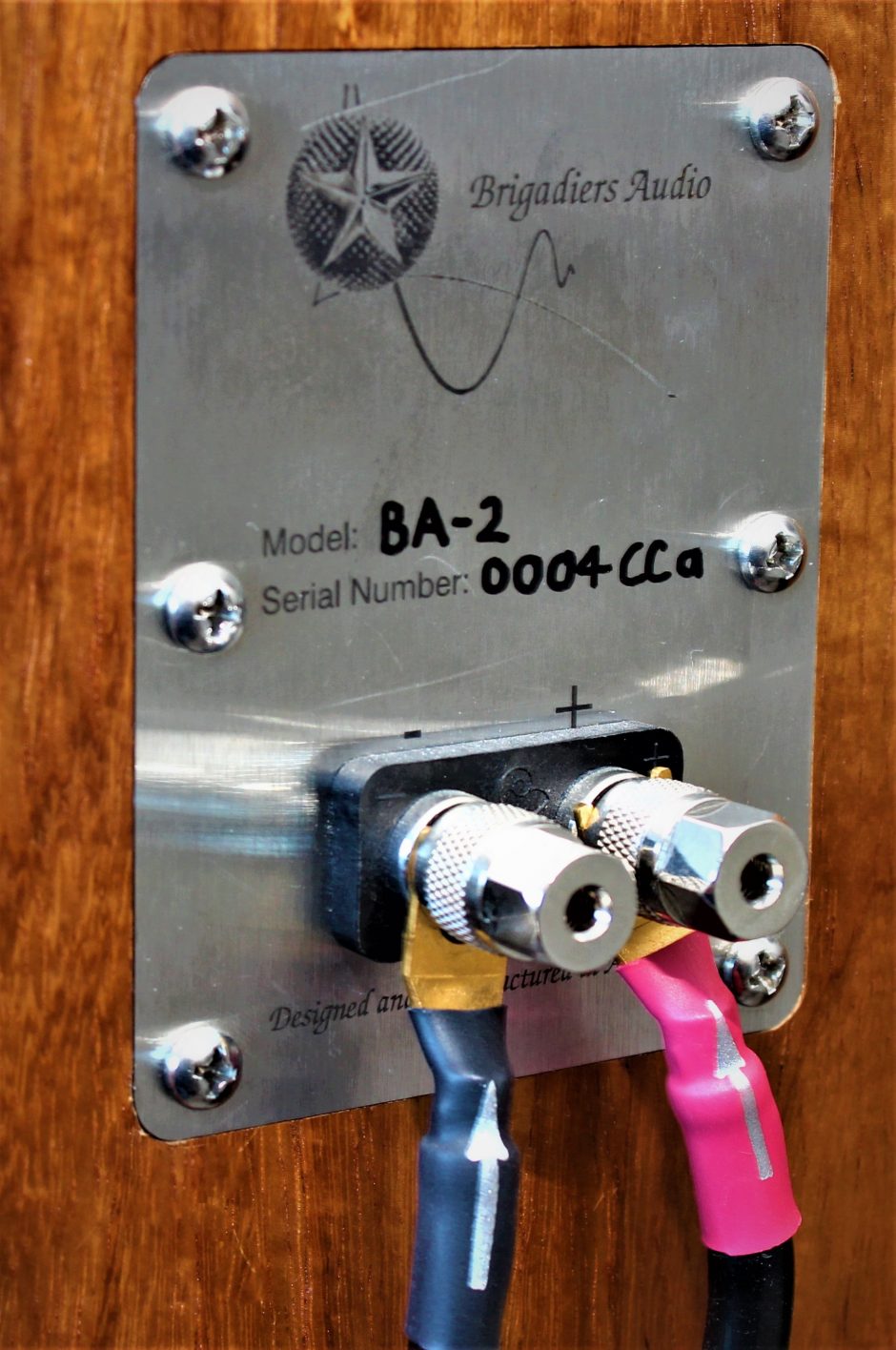 If you’re a “serious” audiophile, do you have a need for something like the Luminous Audio Prestige III speaker cables? Maybe not, at least in your system.

But I’m always looking for great budget components, as are you. Over the last twenty years in this hobby, there were times when I would have appreciated a pair of speaker cables that retailed for this amount. Before I started in this industry, back when I was just another crazy audiophile, I often found myself short on good speaker cables for one reason or another. I’d search for affordable choices that were still good enough to elevate the sound quality. I’d poke my nose into Audiogon, looking for a deal, or I’d make a trade with an audiophile buddy.

This would have gone smoother if I’d known about Luminous Audio. This was the affordable speaker cable I hoped to find back then. Now, with all of this expensive cable at my disposal (okay, sounded like I was bragging that time), I still have a need for good-sounding $188 pair of speaker cables. It might be for break-in, or a second system in the bedroom and office or just something to recommend to a pal who’s just starting out in the hobby. The Luminous Audio Prestige III can do all of that for you, maybe even more. 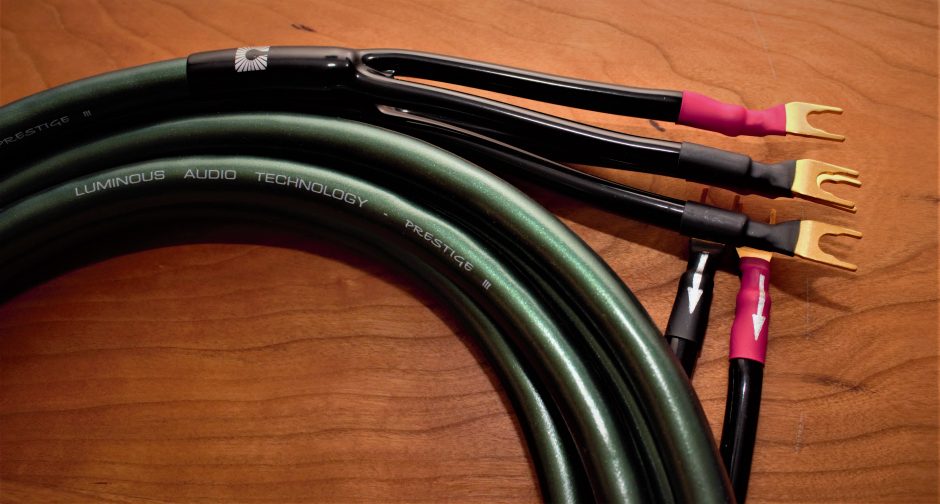 by John Richardson I come from a do-it-yourself type family. To the best of my knowledge, this handy trait started out with both of my grandfathers and got handed down from there. One was a […]

by Brian Hunter At first look, the Callas bookshelf-style speakers ($5,000/pair) by Italian-based Opera Loudspeakers should grab your attention. Grill on or off, black leather can be seen covering the front faceplate and a fine […]

Before I get to the Final Touch Audio cables, I have to confess. Or maybe just explain how and why this happened, and caveat the whole thing with this: “Sometimes in life, good things just […]