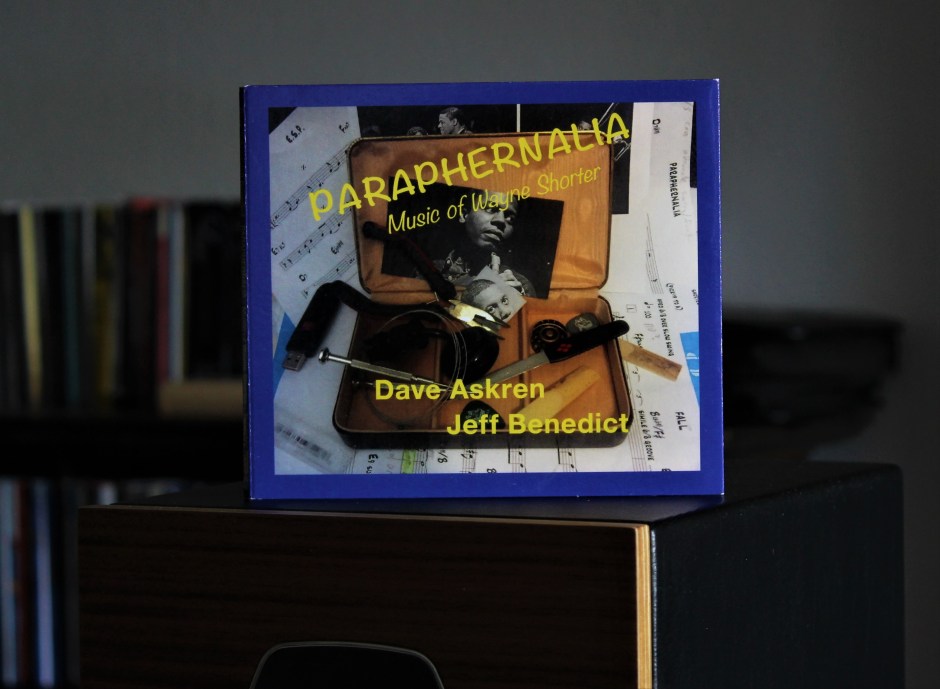 Paraphernalia: Music of Wayne Shorter from guitar player Dave Askren and sax player Jeff Benedict was released back in May–it’s another one of those wonderful releases that almost slipped through my fingers during my recent cross-country move. I remember being very impressed with it on first listen and putting it at the top of the review pile, but those piles were shuffled around and packed up and driven 3100 miles. I’m lucky I found it again. I’m lucky that I listened once more to find out why I originally felt it was so special. I feel like this is a tale I’ve told before, maybe just a few days ago.

First of all, the sound quality on this CD is nothing short of oh yeah, baby. I’m talking reference quality, the kind of CD I’d bring to a high-end audio show back in the day. Lots of contemporary jazz releases have excellent sound quality, possibly because there is a huge overlap between audiophiles and jazz lovers. This is better than that. Jeff Benedict and Dave Askren are joined by bassist Jonathan Pintoff and drummer Chris Garcia, and they play deep into their instruments, coaxing precise sounds that don’t necessarily rely on the past.

Second of all, I know that this is a Dave Askren and Jeff Benedict album. It says so on the cover. But for me, Paraphernalia is about Garcia and his fabulous drums. I haven’t traveled so far into a drum kit since Gergo Borlai’s stunning work in Somesh Mathur’s Time Stood Still. I thought Mathur had to be the drummer on that album as well–fortunately, I’m familiar with both Askren and Benedict.

Chris Garcia’s performance is certainly special in every way. It’s inventive, introspective and detailed in its approach. Dave Askren produced this album, using engineer Nolan Shaheed, and somehow they did a beautiful job of recording Garcia’s moves. You’re inside the kit, almost inside Garcia’s mind. You can almost hear his thoughts along the way, and the difference between his improvisation skills, his intuition and his experience.

Finally, Dave Askren and Jeff Benedict’s Paraphernalia is about Wayne Shorter. Shorter’s a jazz legend, certainly, but I’m late to the party and only started collecting his album a couple of years ago. So much jazz, so little time. Askren and Benedict decided to focus on Shorter’s output during the ’60s and his years with Weather Report. What makes this special is that Askren and Benedict, who have been playing together for 25 years, aren’t trying to sound like Shorter. As Dave Askren explains, “you can just do your own thing and make music your own way.” They do, and it’s the rare tribute album that’s as original as it is classic.

Many jazz fans have never heard of pianist Lennie Tristano. I would imagine a great many jazz musicians, however, would immediately recognize the name. Tristano was known more as a teacher than a performer, and […]

I’ve been going on and on about the wonderful and daring Swiss and Russian jazz albums I’ve been receiving, and how their distinctly European takes on simple trios and quartets has re-energized my enthusiasm for […]

Benjamin Schnake Ensemble, The Joy of Playing | The Vinyl Anachronist

Today is officially the last day of summer, and the cooler and possibly rainy weather here in the Pacific Northwest today almost feels celebratory. We’re talking about a summer where on the hottest day here […]