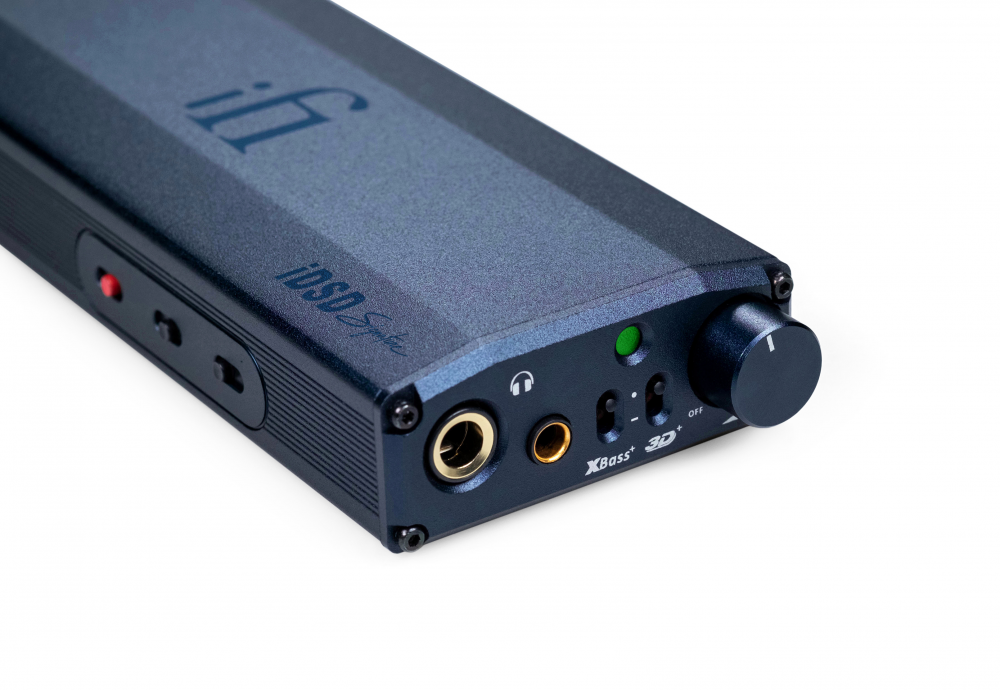 SOUTHPORT, ENGLAND (PTA) — I’ve been a fan of iFi Audio electronics for some time now. iFi always has a great presence at audio shows, and their booths do more than impress. Currently I have an iFi Zen Blue in for review, and my experience with it is revelatory. But I won’t give away too much there.

Recently Nan Pincus and myself have been going strong down the head-fi rabbit hole and have developed a lust for new and exciting headphone related gear. iFi’s iDSD products have been on our radar for some time now, and this new Micro iDSD Signature surely tantalizes.

Do check out the detailed breakdown of ports, inputs, and outputs on the iFi Micro iDSD Signature at the bottom of the press release. 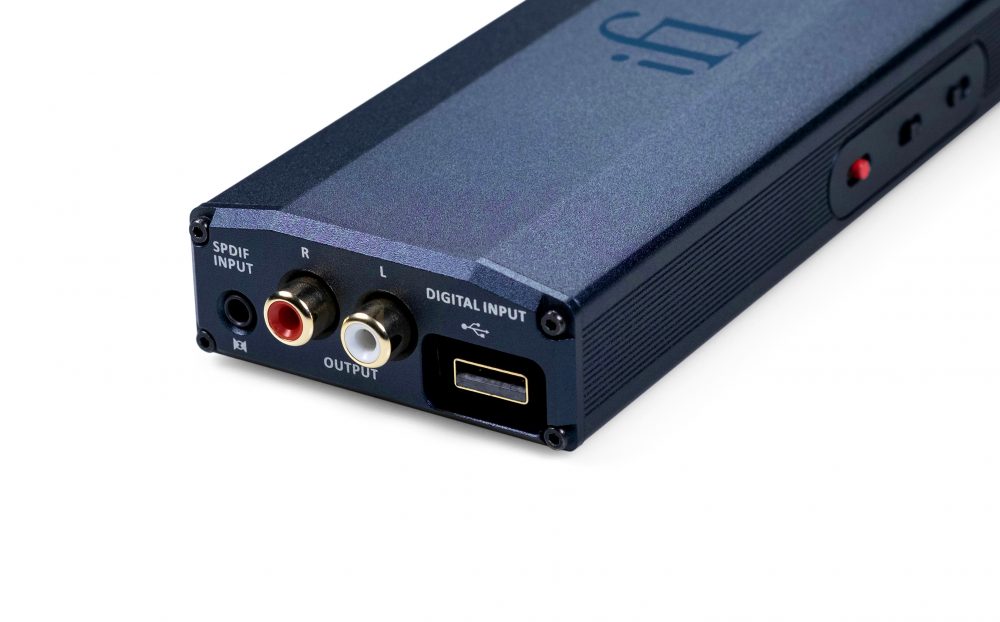 Sporting a host of enhancements both inside and out, one of the most highly acclaimed hi-res DAC/headphone amps on the planet just got even better – meet the micro iDSD Signature

iFi audio, the acclaimed maker of audio devices for home and portable use, has redesigned one of its most popular products to create the micro iDSD Signature, delivering a host of improvements to enhance performance and usability.

Since launching in 2017 as an upgraded version of the original micro iDSD, the micro iDSD Black Label has been iFi’s top-of-the-range battery-powered DAC/headphone amp. The new Signature edition builds on its predecessor’s reputation for exceptional sound quality and versatility with enhanced circuitry in critical areas and a new 4.4mm Pentaconn headphone output, among other upgrades.

The new model is housed in the same 177x67x28mm extruded aluminium enclosure as the Black Label version, as all products in iFi’s longstanding ‘micro’ range have been. But, rather than black, the micro iDSD Signature sports a Space Blue finish – a new colour reserved for ‘Signature’ versions of some of iFi’s most popular products, of which there will be more in the months to come.

Although powered by a built-in rechargeable battery, the micro iDSD Signature is more of a desktop-sized device than pocket-sized one – a transportable DAC/headphone amp that can easily be moved around without requiring a mains socket. Being battery-powered gives it a performance advantage over mains-powered products, too – ultra-clean and stable DC power, negating the issues that can be introduced by AC mains electricity with its dips, spikes and noise-inducing RFI/EMI pollution.

The battery delivers 6-12 hours of playing time, depending on the type of headphones connected and the performance mode engaged. If the battery runs low whilst in use, it can be plugged into a power source to charge and play at the same time. 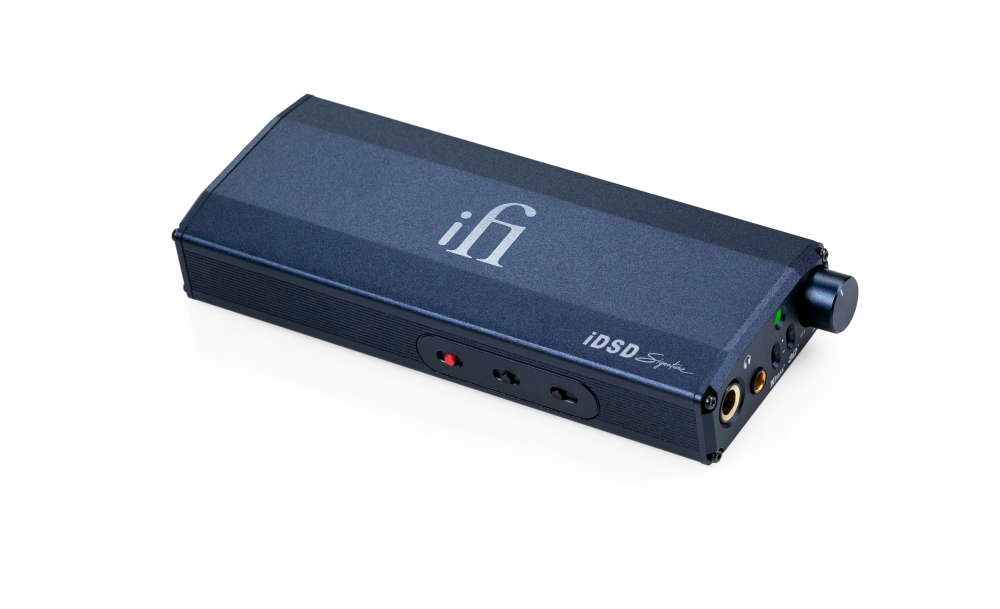 The micro iDSD Signature’s ‘digital engine’ is based around a Burr-Brown DAC chip that iFi uses extensively, selected for its natural-sounding ‘musicality’ and True Native architecture. Here, as with the previous Black Label version, two of these DAC chips are installed in a custom ‘interleaved’ configuration. This enables four pairs of differential signals – two pairs per channel – which lowers the noise floor, improves channel separation and enhances the DAC’s ability to resolve fine musical detail and micro-dynamics.

Hi-res audio support is state-of-the-art, handling PCM data to 32-bit/768kHz, all levels of DSD up to DSD512, and single- and double-speed DXD. MQA ­– the hi-res streaming codec, as used by Tidal’s ‘Masters’ tier – is also supported. Thanks to the Burr-Brown chip’s True Native design, PCM and DSD take separate pathways – this enables DSD, as well as PCM, to remain ‘bit-perfect’ in its native form right through to analogue conversion. This is often not the case with DAC devices from other brands. 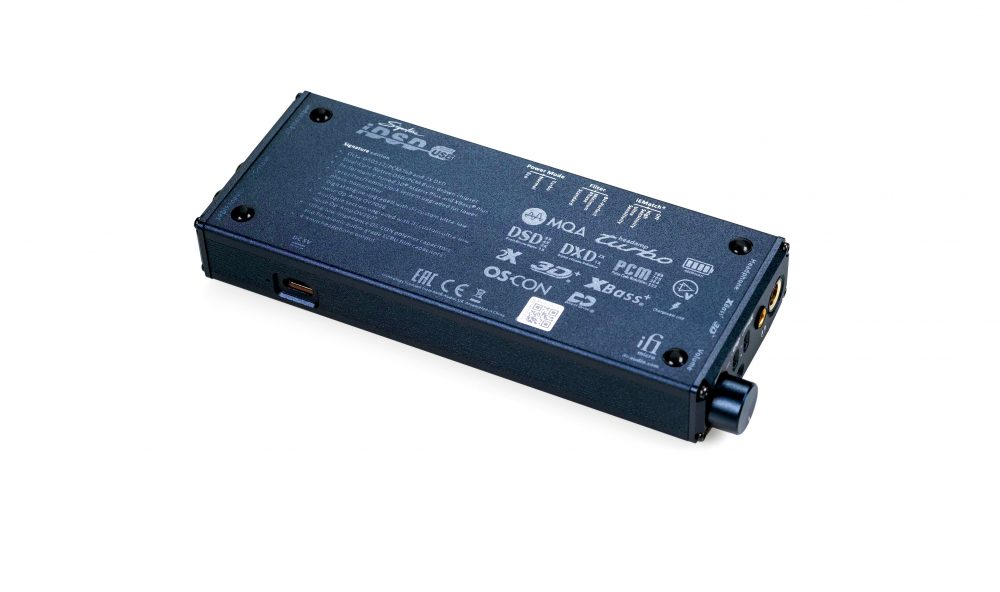 The outgoing micro iDSD Black Label’s amp stage remains widely recognised as the finest available in any battery-powered portable DAC/headphone amp, able to drive all manner of headphones with aplomb, from highly sensitive in-ear monitors to current-hungry planar headphones. For the new Signature version, the circuitry has been fine-tuned – it still delivers the same prodigious power (up to 4100mW) and dynamic ability, but the signal path has been refined to maximise sonic texture and detail.

These are all more costly then components, but class-leading qualities such as low ESR (Equivalent Series Resistance), high stability and low distortion pay great dividends in terms of sound quality. Many hours of listening tests, alongside rigorous analysis in the lab, has determined the optimum circuit design to deliver maximum musical enjoyment.

An important aspect of the circuit design is its direct-coupled nature – no coupling capacitor is present. This is achieved without a conventionally applied DC servo; iFi calls this design Direct Drive Servoless. 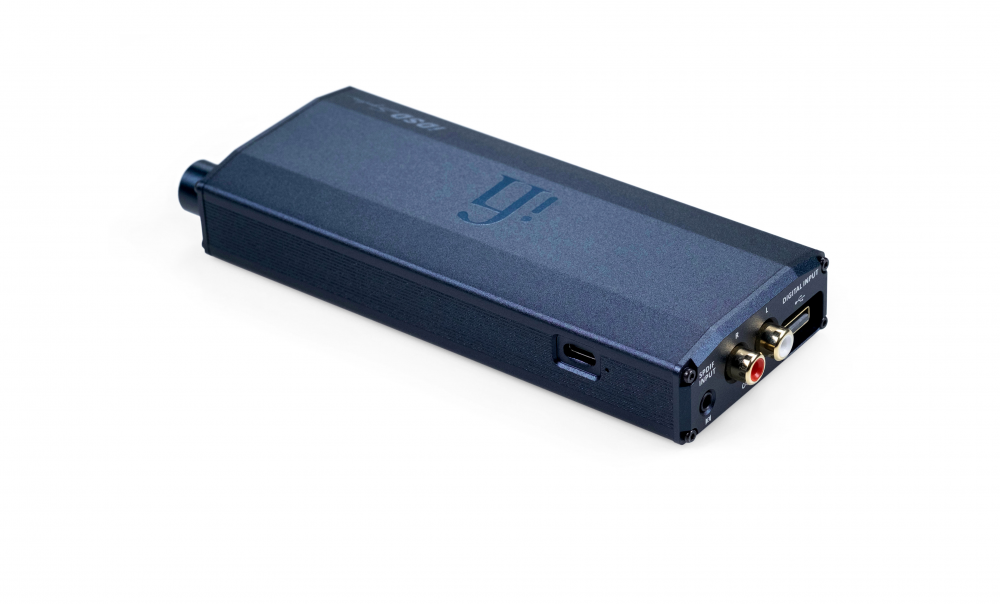 With the huge variety of headphones and digital music platforms available, all with different technical characteristics, the ‘one size fits all’ approach offered by many DAC/headphone amp manufacturers fails to deliver the versatility many users require to make the most of their music. iFi designs its products to be more flexible, delivering precision sonic tailoring via switchable settings to match any headphone set-up, the variation in quality of digital audio files and, of course, personal taste – the micro iDSD Signature offers this versatility in spades.

The digital stage benefits from a variety of filter settings: ‘Standard’, ‘Minimum Phase’ and ‘Bit-Perfect’ for PCM files, and ‘Standard Bandwidth’, ‘Extended Bandwidth’ and ‘Extreme Bandwidth’ for DSD. The amp stage also has three settings to adjust power and gain: ‘Normal’, ‘Turbo’ (ramps up the level of drive for current-hungry headphones) and ‘Eco’ (dials down the power to suit high-sensitivity in-ear monitors and/or extend battery life).

Further optimisation for sensitive in-ear monitors – an area of weakness for many DAC/amps – is supplied via iFi’s IEMatch technology, which adjusts the output level to suit. Once engaged, two levels of IEMatch are available ­– ‘High Sensitivity’ and ‘Ultra Sensitivity’.

Those familiar with iFi headphone amps will recognise the company’s XBass+ and 3D+ settings. These proprietary circuits have been performance-tuned for the micro iDSD Signature and may be switched in or out according taste, fine-tuning the sound in the analogue domain to maintain sonic purity. XBass+ adjusts frequency response to enhance low frequencies – useful with ‘bass-light’ headphones, such as some open-back designs. 3D+ compensates for the ‘in-head localisation’ effect that often occurs when using headphones to listen to music that was mixed using a pair of speakers, effectively widening the headphone soundstage to deliver a more speaker-like experience.

At the back of the chassis lie two digital audio inputs: USB Type A and an S/PDIF socket that accepts both electrical and optical signals, the former via a 3.5mm connector and the latter via a supplied adapter.

Unusually, the Type A USB input features a ‘male’ connector, rather than a typical ‘female’ port. This arrangement provides greater mechanical integrity than the USB/Micro USB ports commonly found on DAC/headphone amps from other manufacturers. It also offers an advantage to users of iPhones and iPads with Lightning ports, because it accepts Apple’s Lightning to USB Camera Adapter directly without requiring an additional female-to-male USB adaptor.

Between the digital inputs reside a pair of RCA analogue outputs – the micro iDSD Signature can be connected to a pair of powered speakers, or a power amp and passive speakers, to act as a DAC and preamplifier. When used in this mode, a different version of iFi’s 3D+ analogue signal processing may be engaged if desired, specifically designed to create a more spacious soundstage with speakers rather than headphones. Whether in preamp mode or driving a pair of headphones, volume is controlled by a precision analogue potentiometer delivering the quality expected of full-size hi-fi equipment.

On the front panel, beside the volume knob and XBass+ and 3D+ switches, are a pair of headphone outputs – a 6.3mm output for headphones that have a standard single-ended connector (headphones with a 3.5mm jack can be connected using an adapter) and a 4.4mm Pentaconn output for headphones offering balanced connection. An increasing number of high-quality headphones and in-ear monitors either come so equipped or give the option of detaching the cable and upgrading to a 4.4mm Pentaconn connector – this output makes the most of them.

Both headphone outputs utilise iFi’s ‘S-Balanced’ output circuitry, delivering the sonic benefits associated with balanced connections with all headphone/earphone types – even those with single-ended connectors – cutting crosstalk and associated distortion in half.

While the most obvious changes from the previous Black Label version of the micro iDSD are the fine-tuned audio circuitry, the 4.4mm Pentaconn headphone output and the new Space Blue finish, numerous other enhancements have been applied to the new Signature edition.

The faceplates at the front and rear have been trimmed for a sleeker look, with a redesigned volume knob and new switches for XBass+/3D+. A multi-coloured LED to indicate the sampling frequency of the music being played is now also sited on the front panel, while the IEMatch control has been moved from underneath the unit to the side.

A USB-C charging port now resides on the right-hand side, next to a new battery status indicator. Damping feet now adorn the underside of the unit, too – it all adds up to a range of improvements that make this the best-ever version of iFi’s much-lauded micro iDSD.

The iFi micro iDSD Signature is available later this month from selected retailers, at an RRP of £649, (€699, US$649). Only a limited number will be made, so those wishing to get hold of the Signature edition of iFi’s landmark transportable DAC/headphone amp should act fast to avoid disappointment. 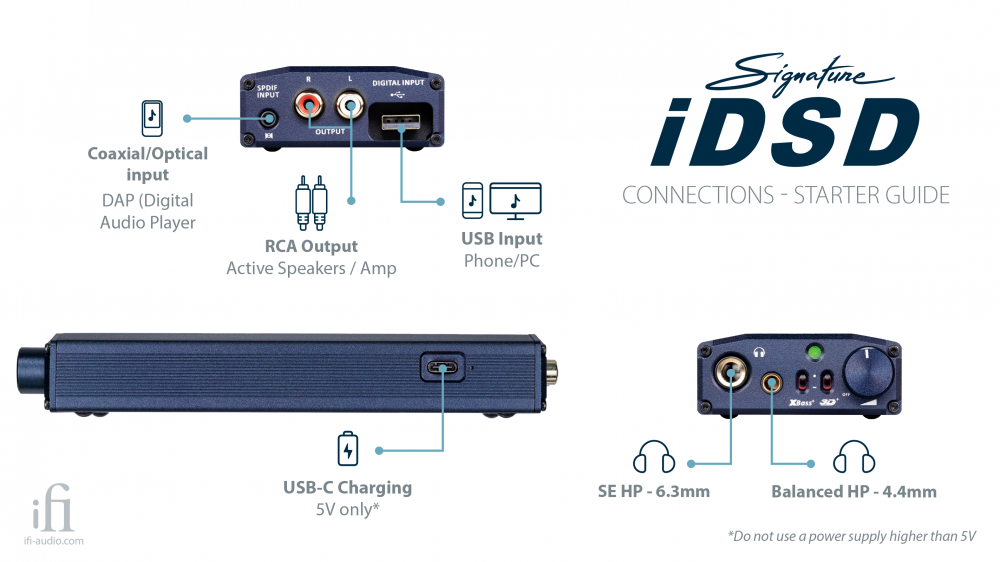 Headamp always has their great Blue Hawaii and GS-X amplifiers sounding excellent at RMAF but this year was an introduction of the much more affordable Gilmore Lite 2 at $499 USD.  Shipping in a few […]

There’s no denying that Sonus Faber, and McIntosh Labs make beautiful-looking gear. The craftsmanship, attention to detail, and handmade nature of their speakers, and amplification components scream bespoke. But the reason these two marques of […]