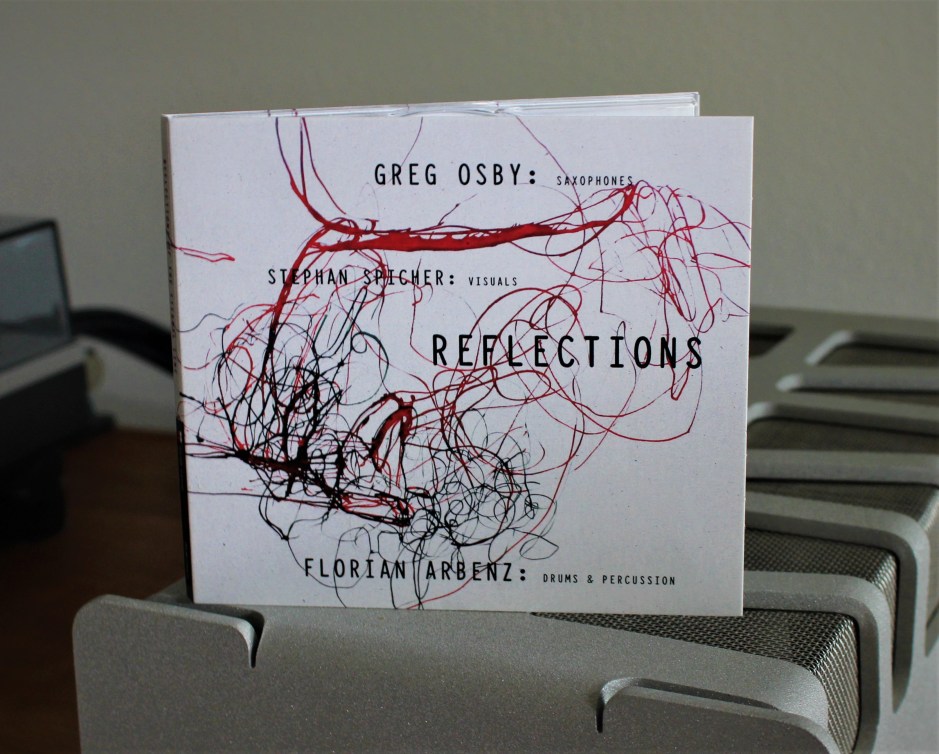 I’ve mentioned that I love getting review requests directly from performers, usually because I see the passion in their appeal. It’s direct and unfiltered. This isn’t a swipe at record label PR or publicists–those people work incessantly and hard to get their clients noticed, something that’s unusually tough in the world of contemporary jazz. But getting a personalized handwritten note in the shipping envelope? Of course I’ll take a listen. This was the case with drummer/composer/producer Florian Arbenz, who approached me in that modest and humble manner that turns me into mush every time.

Reflections of the Eternal Line is the new album from Florian Arbenz, who teamed up with saxophone player Greg Osby and visual artist Stephan Spicher to produce a mad duo recording of saxes and drums. It sounds novel, and it is, but it’s Florian Arbenz’s crazy, inventive drumming that captures my attention right outta the gate. Sure he’s fast, and he can improvise with the best, but Arbenz is one of those percussionists who take things literally–they are not chained to their traditional drum set. While Osby’s sax is equally untethered, creating a sound that’s awfully close to free jazz when it builds momentum, it’s Arbenz’s choice in struck objects that define the mood and structure of each song.

Florian Arbenz doesn’t provide detailed notes on what he’s playing and when–I had to take educated guesses most of the way. Is he futzing around with a soundboard of a piano or is it a cajon? Is that a hurdy gurdy, a marimba or a kalimba? When he does sit behind his kit, which amounts to more than half the time of these seven original compositions (two are from Osby), he flies at low altitude, getting stuff under the radar and making a lot of sounds. It’s fluid and effortless, my two favorite drumming approaches, the kind of performance that says “I’m just hinting at what I can really do.” It reminds me of Jim Kelly of the Buffalo Bills–he claimed that he could throw the football from one end zone to the other, and while I never saw proof I believed him. Arbenz has that same sense of quiet bravado that inspires confidence.

Reflections of the Eternal Line may be a harbinger of things to come. Just yesterday I noticed that I had a lot of recordings on deck that focused on drums and percussion. I like drums and percussion. In many cases, it’s the first thing I latch onto when listening to a record for the first time. So I’m a little excited to proceed with the reviewing chores. With Florian Arbenz, it’s hard to think of anything else while he’s playing. This is just fantastic drumming, period. This is the week for driving neighbors crazy, I guess.

UK guitarist Chris Standring and his new album Wonderful World have helped me to confront my secret, unspoken love for a certain kind of music, a nebulous genre known by various names such as exotica, […]

Saxophone player Kenny Shanker and his new album, Beautiful Things, act as quite the polar opposite to the Swiss and Russian jazz that has dominated my review schedule over the last few weeks. These international […]

The arrival of Now from jazz pianist Lafayette Gilchrist (bandcamp page) coincided with a young person asking me, “What’s your favorite type of jazz?” The answer may change slightly here and there, depending on my […]