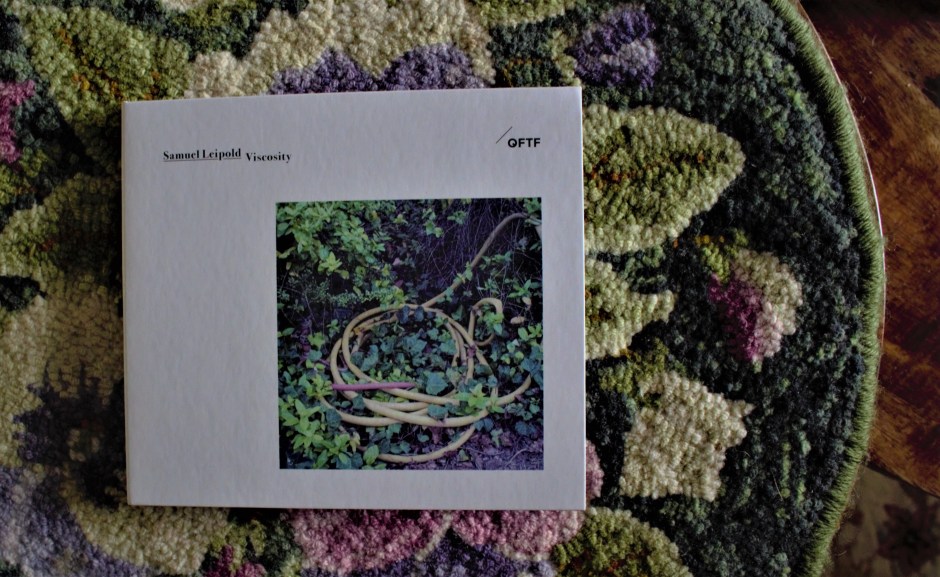 Samuel Leipold and his album Viscosity reminds me of the first few times I tried to play guitar. My best friend had learned how to play when he was young, piano too. Every time I’d go to his house I’d pick up one of his guitars and make various sounds with the body and strings, all without any concept of how to extract a chord or even a single tolerable note. I can even remember getting in the zone, coming up with something that sort of resembled music–just not normal guitar music. It was probably still unlistenable, but I learned a lot about guitars before Lesson One.

When I actually learned how to play the guitar many years later, all those exotic, weird and atonal noises disappeared forever. I learned chords. I played notes. I left all that fooling around behind, but at the same time I always remembered the type of music all that fumbling produced. Samuel Leipold, an exquisite and adventurous guitar player, seems to have brushed up against those memories. Remember when that interviewer asked Jackson Pollock if he knew when he was finished with a piece, and how Pollock replied “How do you know when you’re finished making love?” If you listen to Samuel Leipold for the first time after a lifetime diet of pretty acoustic guitar music, you might ask him something similar.

Does this sound like I’m messing with you? Have I stumbled upon a wardrobe full of the Emperor’s New Clothes? No, I haven’t. I mentioned just yesterday that I love it when artists contact me about their latest releases. Samuel Leipold, who’s based in Switzerland, sent me Viscosity in the mail because he knew I would dig it and understand its hidden complexities. He was inspired by plenty of guitar music, everything from contemporary classical pieces from Toru Takemitsu and Tristan Murail to electronica to “drone-heavy Touareg rock music from Agadez.” (I hear Harry Hosono in places as well.) That’s a mighty palette.

To truly understand the solo guitar music of Samuel Leipold, you have to be patient. As Leipold explains, “It became difficult to impose the structures, forms and harmonies I developed into the common musical language understood by fellow musicians.” This is throwing down a gauntlet of sorts, of daring the listener to press forward, deep into the frontier. Like the film Mulholland Drive, however, it’s all about whether you connect to this music by identifying what you have in common with it, by discovering its secrets before anyone else. I remember those early days, thumping and poking and slapping that 12-string Washburn and I feel those connections.

There was only one difference. I wasn’t playing music. Samuel Leipold is, beautiful and haunting and persistent music, music that is indeed viscous and full of thrilling sounds and ideas.

It’s happened a couple of times so far, where I publish a Vinyl Anachronist music review and our own Dave McNair messages me and says “oh, I worked on that one.” I felt kind of […]

This Could Go Boom! and The OSYX | The Vinyl Anachronist

“This Could Go Boom! believes in the potency of unheard, under-promoted musical narratives and their potential to spark action and cultural change.” It’s certainly a noble idea, starting your own record label when you’re sick […]