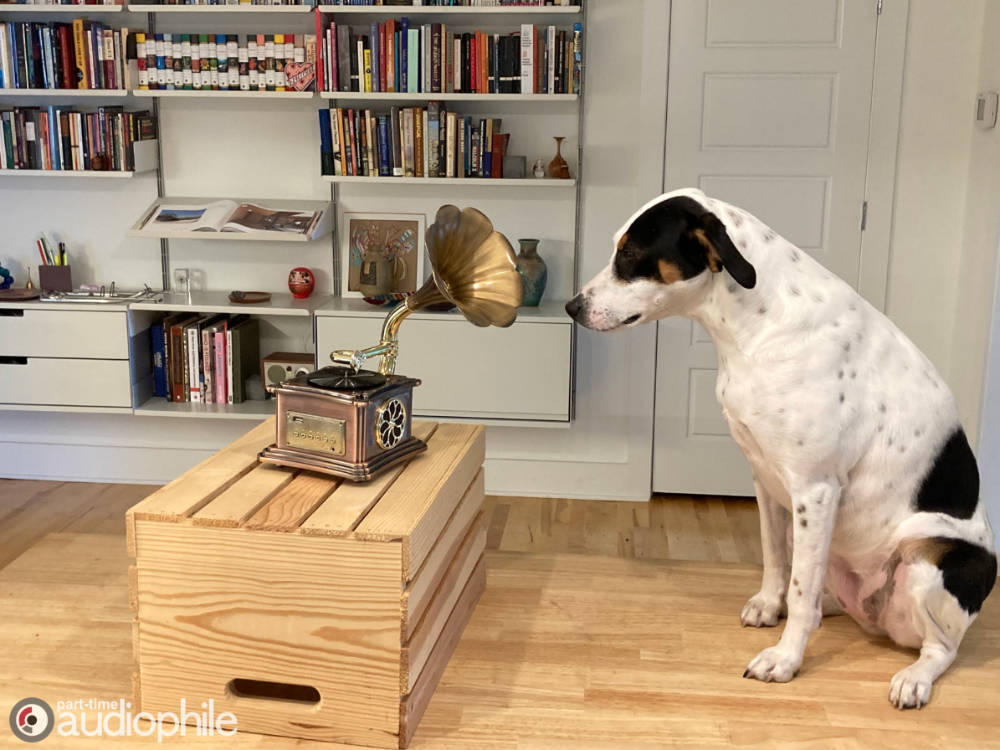 When it became clear that I wasn’t going to be hitting the Halloween parties this year, I was still eager to participate somehow in the ritual. I decided to let a season of quiet isolation at home intersect with fulfilling a longtime ambition: posing my dog, Winter, as Nipper, the RCA dog made famous in the Francis Barraud painting “His Master’s Voice,” which was used promotionally first by the Victor Talking Machine Company, and then by its acquirer Radio Corporation of America.

Words and Photos by Nan Pincus

Let me give a little background on Winter first. When I finished graduate school in 2016, I felt like a grown up who was ready to adopt a dog from a shelter or rescue and give her a loving home in exchange for the steady companionship, knowing looks, and forced stability of habits that a dog requires. I ended up adopting Winter when she was four months old and fairly quickly I realized that despite not having any fox terrier ancestry, she had a great resemblance to Nipper.

Winter is a fairly typical dog, partial to chamber music, squirrel watching, and rambling through the woods with me, her foolhardy human. She prefers her music reproduction to be Hi-Fi grade, but when I started searching the net for a vintage horn gramophone, she proved herself flexible, finally agreeing with me that for her first foray into this new role, a modern reproduction would be fine. 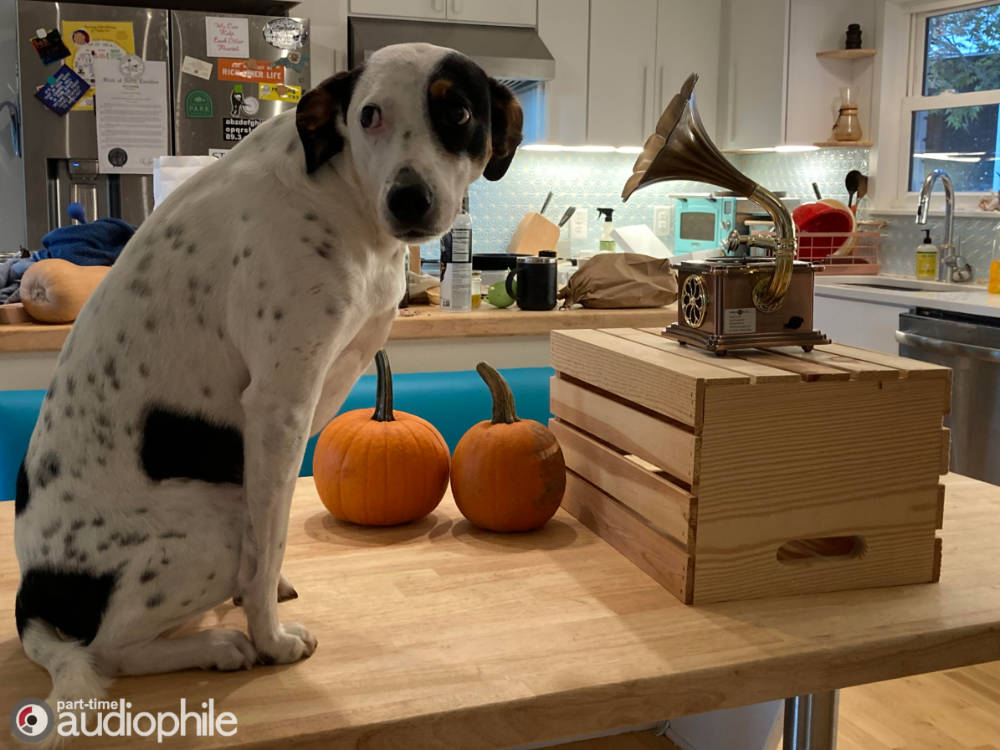 I had no use for a novelty turntable that would insult any record unfortunate enough to meet its needle, so I selected a little Bluetooth speaker with a brass sound horn for the purposes of our photo shoot. While not a product I’d review for a Hi-Fi publication, I will mention this wasn’t a bad little speaker for its category with more usable volume and color than you’d expect.

Immediately with this purchase, I made a conceit that the scale wasn’t going to be quite right, but also not disturbingly off because the horn of the Edison-Bell cylinder phonograph in “His Master’s Voice” is not actually that large in comparison to Nipper. Another conceit I made was that Winter was not going to be powerfully intrigued by a reproduction of my voice. She hears my disembodied voice regularly on the phone or the radio and has never been impressed. It’s interesting the philosophy of animal minds on what animals are able to make sense of in our consumer technological landscape. There are people that share videos of their cat watching fish on television suggesting that the cat is able to grasp that the representation in front of them has some connection to the splishy-splashy scaled creature that they might want to snatch out of the water. But, I’ve never been close to an animal like that. As far as I can tell, Winter has visceral intuitive reactions to the living things in her world, but their analogous forms reproduced technologically are just tulpa to her. 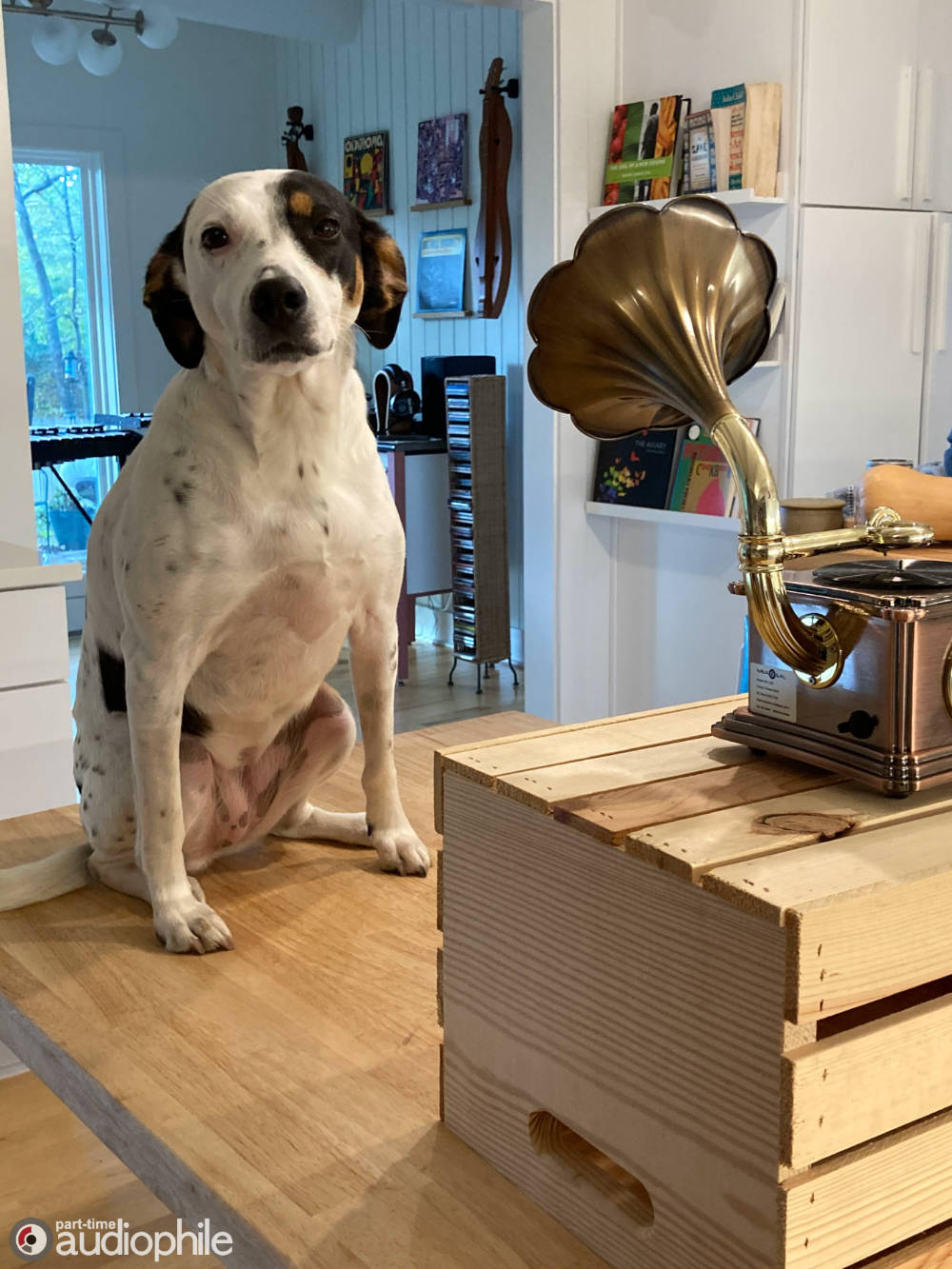 All this is to say that while I played a recording of my voice through the horn speaker as a confirmation that the indifference I predicted was correct, Winter’s interest in the speaker was not going to come from any playback source. Instead, after taking a few photos where she seemed a bit indifferent, I put a favorite dog treat, dehydrated cod, in the horn. That brought her interest way up and she started to engage with curiosity, enthusiasm, and elan that allowed her to be a photographic doppelganger for a 19th century terrier who may very well have actually been immersed in the reproduction of his owner’s voice.

From the pictures included, you will have to be the judge of whether I was successful in capturing the likeness and spirit of Nipper. But rest assured, faithful PTA reader, that there are more Halloween iterations of Winter to come. Perhaps she will blast off with “Chipper” the puppy companion added to RCA ads in 1990. I hope for the day when she will be interested in joining me for close listening and two-channel comparisons and will look at the horn with genuine curiosity. But for now, the horn will function with a dual purpose: a speaker and a treat dispenser to shamelessly bribe her interest. 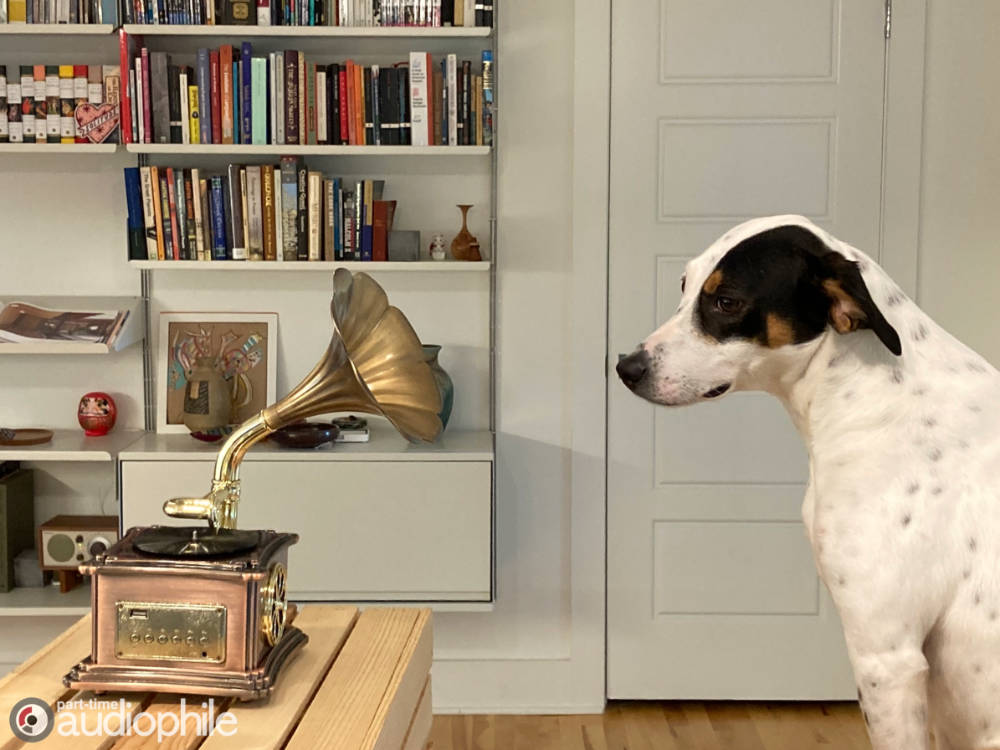 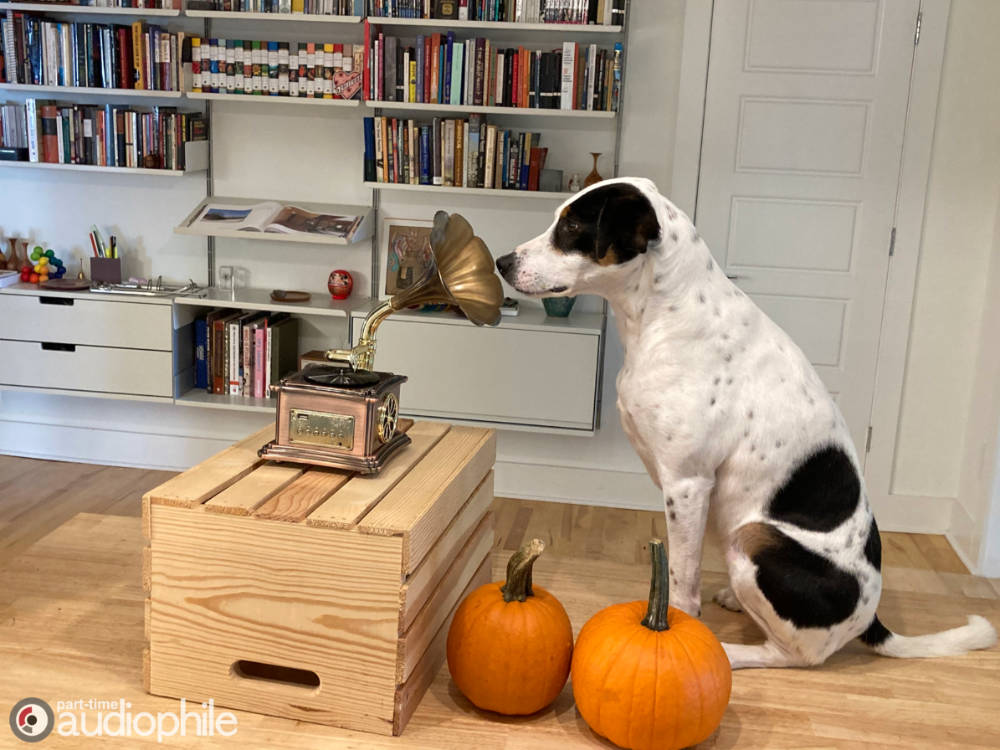 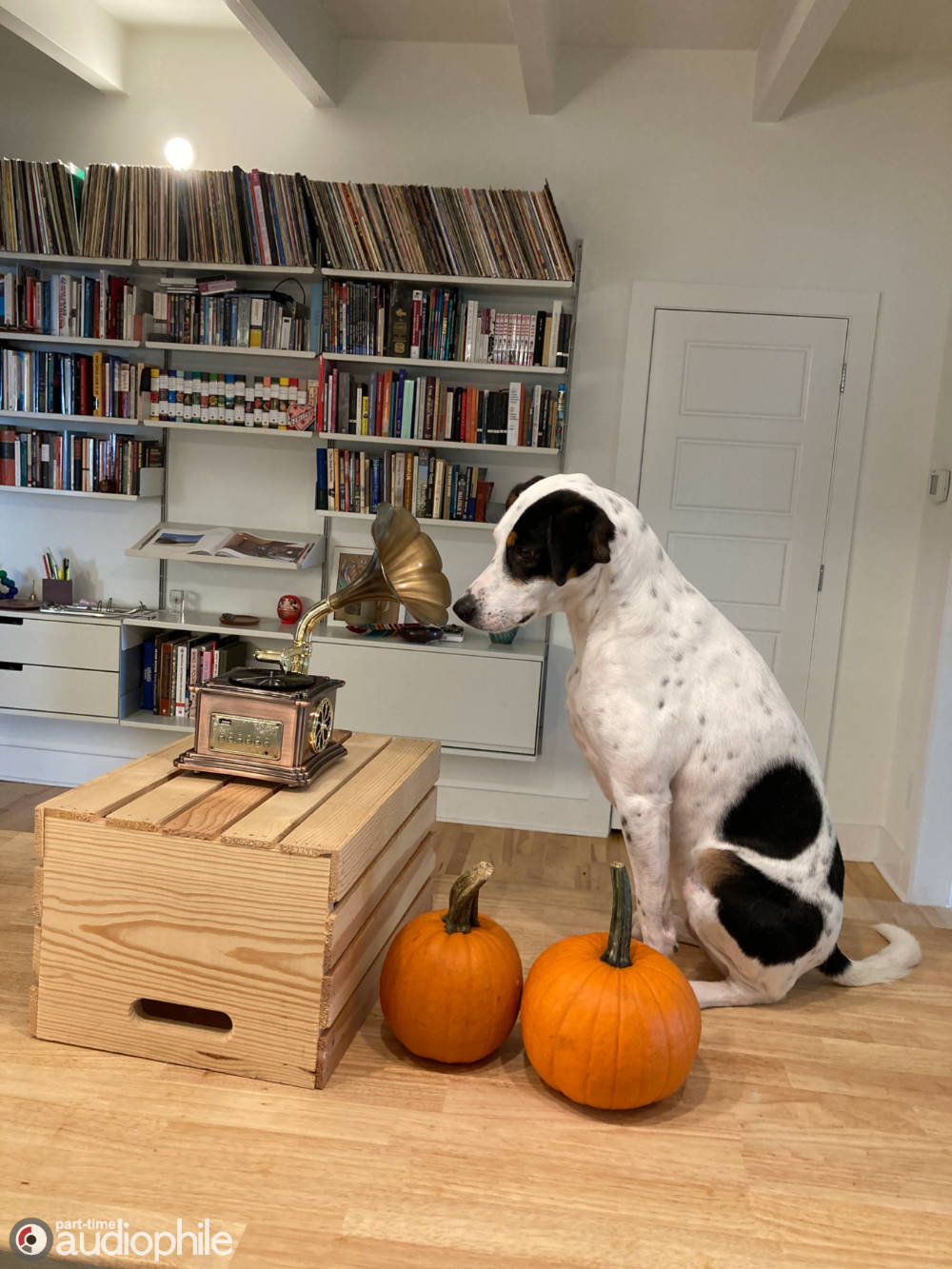 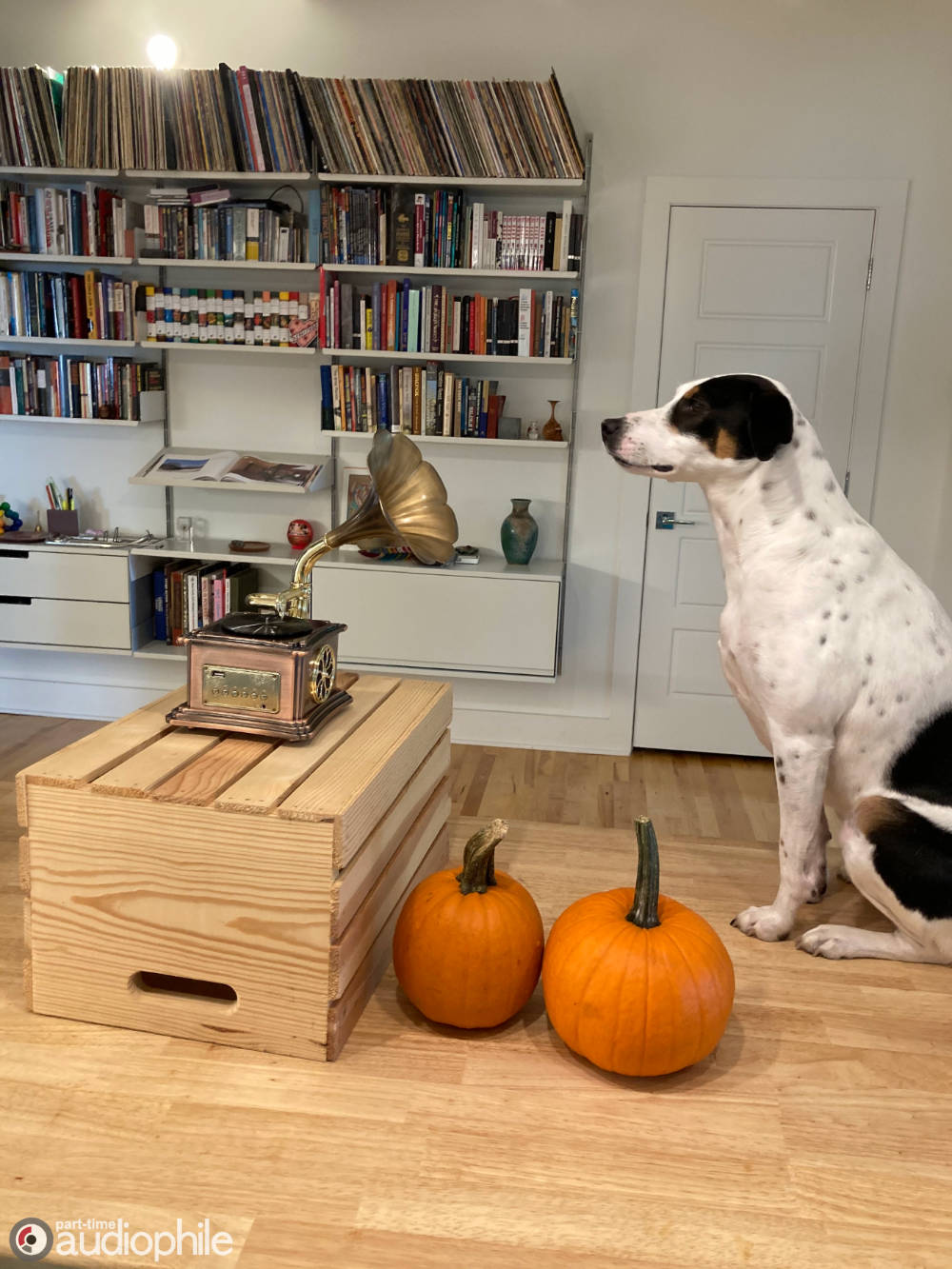 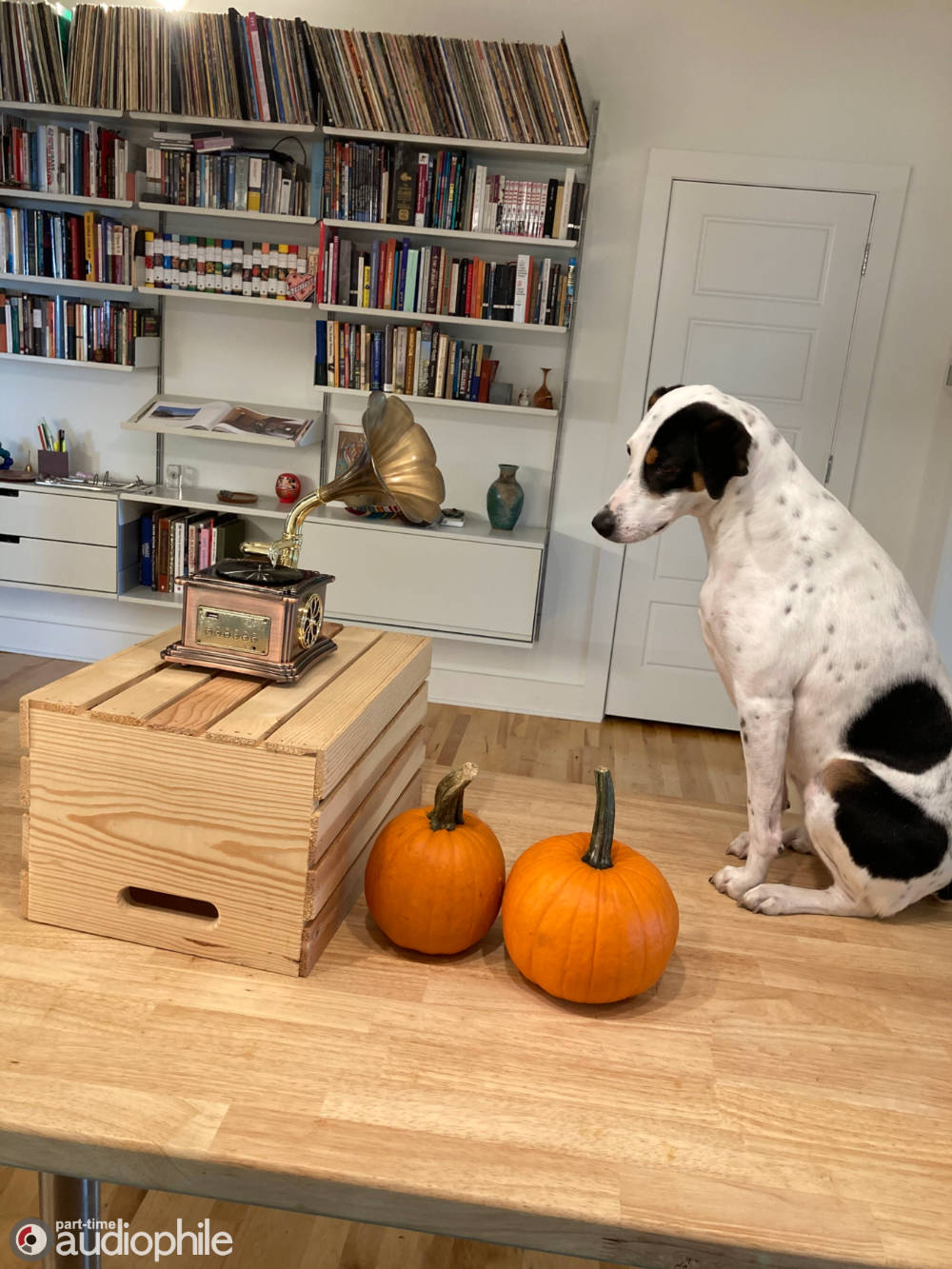 The audiophile world is filled with manufacturers who cater to specific avenues of the hobby. These companies work hard to deliver the goods on their particular vision of what the ultimate sound in recorded playback […]

Reporting by Nan Pincus Your hat and coat You know the one thing that is guaranteed to hold a room? Hospitality. Walking around the exhibit space housing Joseph Audio Pearl 20/20 Graphene speakers at Now […]

LOS ANGELES (PTA) — Audioengine launched their A1 Home Music System with aptX Bluetooth this week, and I feel compelled to alert you of its existence. The all new A1 powered speaker system at just […]