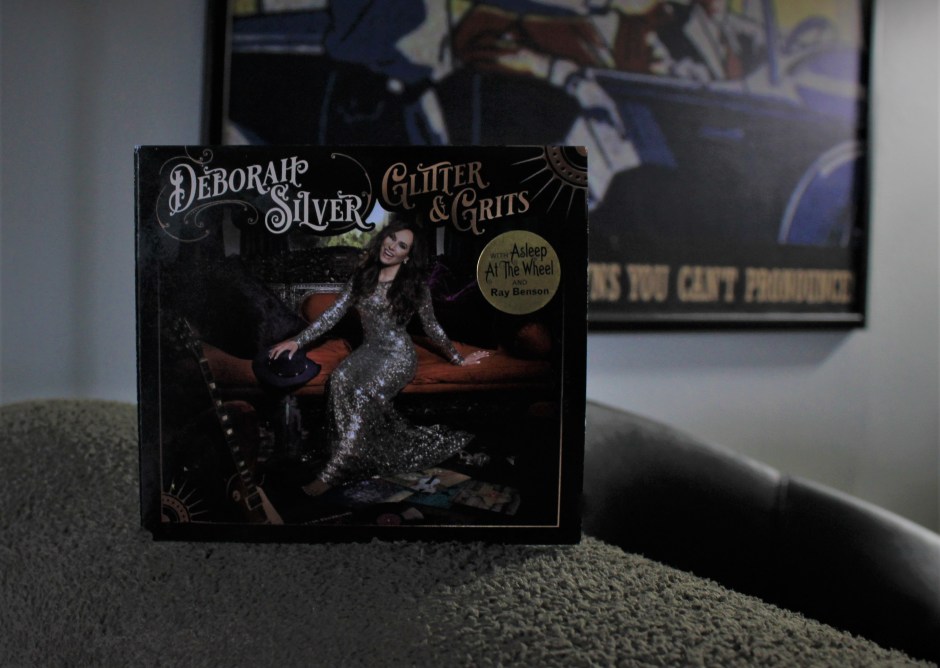 When I first moved to Texas back in 2009, I was more than a little concerned about the music situation there. I know, I lived outside of Austin and shouldn’t have worried one bit–but this Southern California boy just didn’t trust the hype. Once there, I quickly discovered the difference between garden-variety C&W and the Texas version, which was more honest and intelligent and, quite frankly, more rooted in rock and roll. I relaxed and soaked it all in. We’re talking Townes Van Zandt. We’re talking Guy Clark. We’re talking Ray Wylie Hubbard. We’re talking WILLIE. We’re also talking about Texas swing, which Deborah Silver sings on her new album Glitter & Grits.

Uh oh, I thought, when I found a CD with that title in my mailbox. “Are you lost, little CD?” I asked. But I took a listen and said oh, this is Texas swing! Everything’s gonna be okay.

Texas swing, if you don’t know, is closer to big band jazz than country music–although the influences are both obvious. Deborah Silver borrows liberally from both genres, and then throws in a little hot Parisian jazz just to take advantage of her alluring, utterly charming vocals skills (which are immense). She even employs the king of Texas swing bands, Asleep at the Wheel, to join her on stage, while legend Ray Benson produces. So she has all the ingredients for success, and Glitter & Grits is the kind of crossover album that gets all sorts of music lovers all fired up and ready to dance on rough wooden floors in big clunky boots.

I find it almost impossible to resist the charms of Deborah Silver and her fellow musicians. She’s actually from Mississippi, but it’s clear she understands the complexities of this kind of music, how there’s both a purity to the emotions of these songs (it’s about celebrating and being with others, which might trigger a lonesome note or two in days like these). She also understands how there’s more to Texas swing than having a good time out on the town. There’s a strength to this music that flows between songs as diverse as “I’ve Got Rhythm,” “Get Happy,” Fly Me to the Moon” and, of course, “Deep in the Heart of Texas.” I can even tolerate “Ballin’ the Jack,” which I’ve always considered odd and annoying.

There’s a serious story behind the fun, as Deborah Silver and her daughter run a charity called SLAM ALS after Deborah’s sister was diagnosed with the disease. In the past she’s donated the proceeds from her album sales to various charities, which is a great reason to check out Glitter & Grits–as well as the rest of this very talented woman’s catalog.

Journey To Ixtland When I first started writing for Part-Time Audiophile, Scot Hull and Marc Phillips asked me if I wanted to do some cable reviews. I replied something like, “I’m not a believer. Since […]

As you might imagine, reviewing all this high-end audio equipment in the context of maintaining a certain sound of the system can be difficult. This week has been a big period of changes, with a […]

With a name like Jazz Worms, it has to be good. Right? I didn’t know what to think when I first saw this name, and this album title, after I opened the shipping envelope. There’s […]