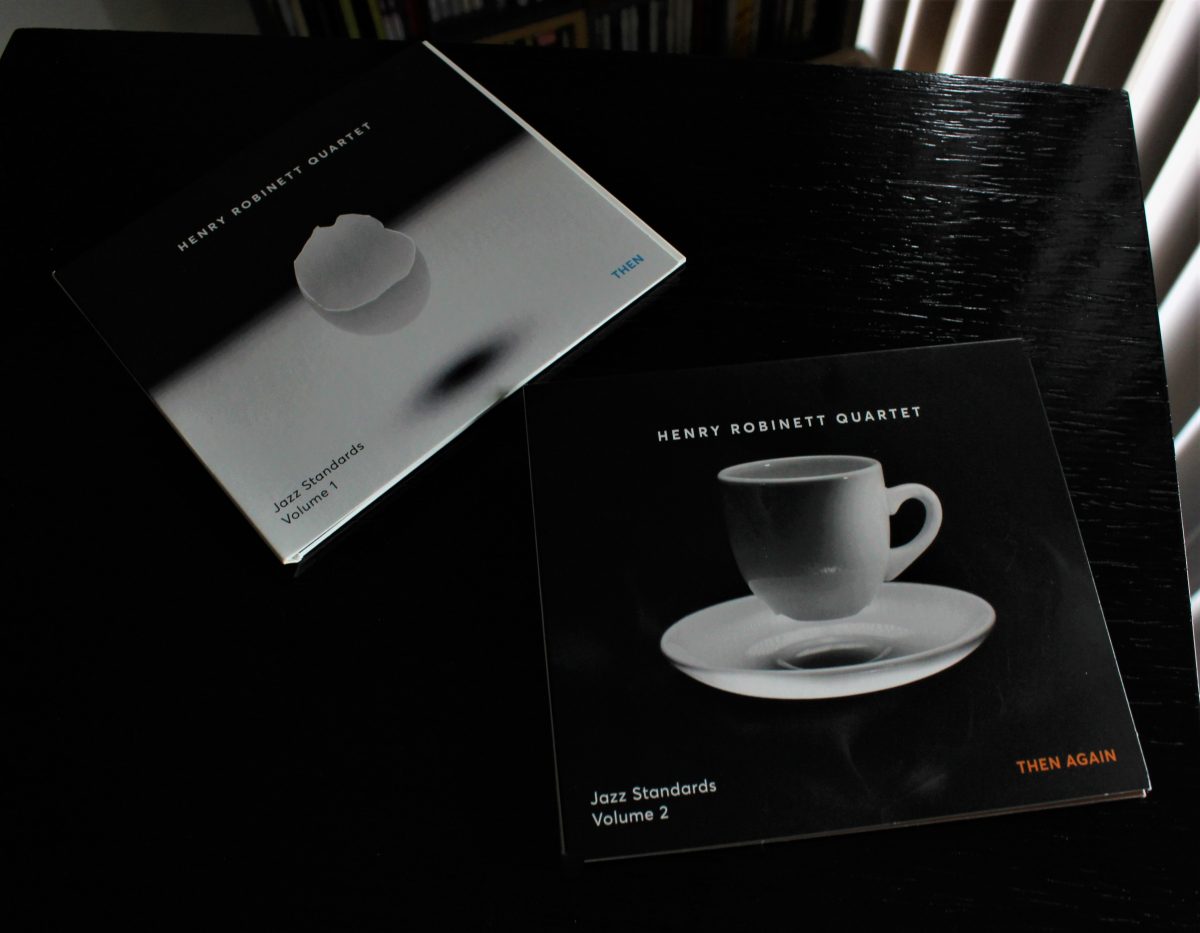 This might be a case of everything old being new again, but I waited so long to review Then: Jazz Standards Vol.1 from the Henry Robinett Quartet (website) that Then Again: Jazz Standards Vol. 2 arrived in my mail box. At first I thought the publicist sent me the same album twice–that has happened on quite a few occasions–but then I noticed the slight differences in the cover. The first volume, which had receded deep into the review pile, was so good, and I kept trying to share that but a lot of things got in the way, such as getting this year’s Buyers Guide out to the world.

So if it’s not too late to save face with the Henry Robinett Quartet, I’d like to go back and state that Vol. 1 is a winner, a masterful outing from a very talented jazz guitarist. Vol. 2 is equally intriguing and is consistent enough with the first volume that this could have been released as a double album, which has been the trend this season. But that wouldn’t be telling you the real story behind Then and Then Again, which is that both albums were recorded twenty years ago.

“Honestly, I don’t know why I left it on the shelf for so long,” Robinett explains. At the time he was between bands and albums, so he assembled a few top musicians who could help him complete this project, one that was distinctly different than anything else he had done. The Henry Robinett Quartet–with pianist Joe Gilman, bassist Chris Symer and drummer Michael Stephans–was born. While Robinett was previously known for a more electric guitar style based in world music, these two releases are based in tradition (“jazz standards,” of course) and the old-fashioned art of jazz improvisation. All four of these gentleman know how to do that very well. That’s why they showed up.

The focus of the Henry Robinett Quartet, of course, is Henry Robinett himself. The liner notes describe his style as “swinging and very accessible. He approaches a tune not unlike a vocalist, emphasizing the melody while adding colors through his phrasing and his harmonic choices.” That’s a great description–Robinett’s guitar is so clear and concise, it almost seems academic. This is how you should do this. But oh, you can try this way, too.

This is not the end of the Henry Robinett Quartet–Robinett is already raiding the vault and preparing the next two volumes for release. Should I have waited until all four were released to tell you about them? Heck no. After you hear these two volumes, you’ll be anxious for the rest, just like me.

It’s been a few months since I’ve heard from my friends in the Swiss jazz world, so I was quite pleased to receive the latest LP from drummer Florian Arbenz. The last time I reviewed […]

I toyed with the idea of resting and relaxing until after the first of the year, but then there’s this, Ronny Whyte‘s latest album, and it’s the perfect New Year’s Eve album. Ronny Whyte is […]

I hate being one of those high-end reviewers who hold onto gear forever, stretching the process out over months and months, waiting for other products to show up, working out whatever issues come up, and […]