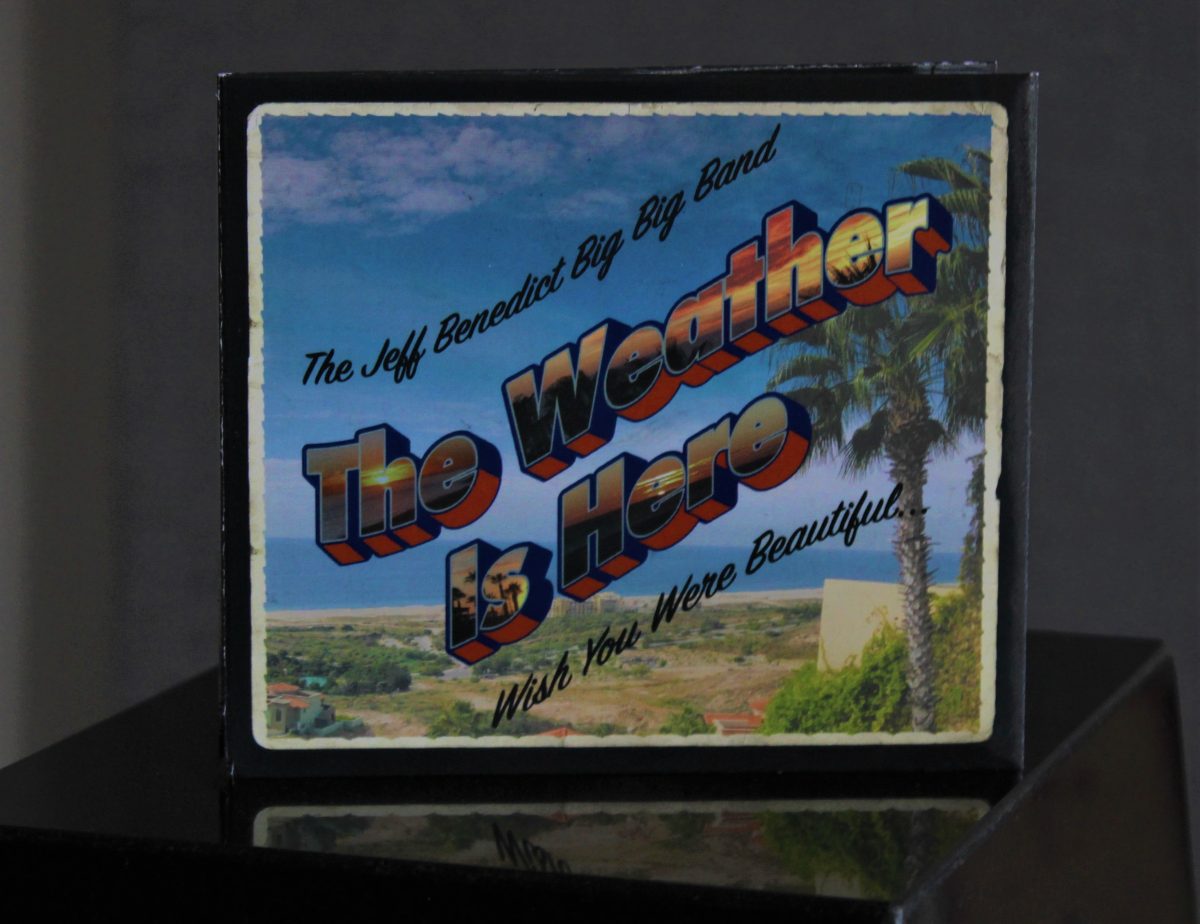 This new album from the Jeff Benedict Big Big Band (website) turned me into a mess for a few hours. That’s mostly because of the title: The Weather Is Here, Wish You Were Beautiful.

I’m not a Jimmy Buffett fan, so I took this title rather literally and questioned whether it was a bit tone deaf. I wrote up about a paragraph and a half, and I stopped at mid-sentence. This isn’t turning out the way I thought. Sax player Jeff Benedict is a talented performer as well as bandleader, and I enjoyed the last release with guitarist Dave Askren. Maybe I’m tired. It’s been a long day. I should just go to sleep. So I saved the draft and planned on re-attacking this album in the morning.

Funny thing is, the Jeff Benedict review was accidentally published in the morning. As is. I even hated my photo of the album cover and I was totally going to retake one. By that time, I was told by a friend that the title was a reference to Buffett, and Benedict’s peeps had sent an email telling me the irony of the album title and that the whole concept was big band jazz with a distinctly rock-tinged ’70s sound. I took it down immediately, but 81 of you read it. It’s for this group I offer this explanation–otherwise I would have pretended it never happened.

Let me say this as honestly and bluntly as possible: the Jeff Benedict Big Big Band’s TWIHWYWB (ha!) is a ton of fun. Big band jazz in a ’70s Lalo Schifrin-esque vein, complete with bad-ass electric guitar solo every once in a while from Dave Askren? Count me in. Benedict’s talent as a bandleader is his ability to take his original compositions, along with standards from Miles Davis and Quincy Jones and Irving Berlin, and he infuses the same fire and passion and brightness so that the album flows seamlessly.

I use that word brightness, which is usually employed as a pejorative in high-end audio. In this case I’m talking about a vividness to the sound. I’m not sure if I want to equate any type of jazz with bright sunshine-y days, but Jeff Benedict has an optimistic and refreshing energy–through both his leadership and his dominating, soaring sax performances.

And to those 81 people–could y’all look right into this flashy thing for a second?

I’ve noticed a minor trend in contemporary jazz over the last year or so, and that involves a concerted effort to separate the great Billy Strayhorn from Duke Ellington, to bring him out into the […]

The Linear Tube Audio/Spatial Audio Lab/Anticables room is usually a highlight at audio shows. Here’s the breakdown: put together a system, including a DAC (from either LampizatOr or, in this case, Holo Audio), and offer […]