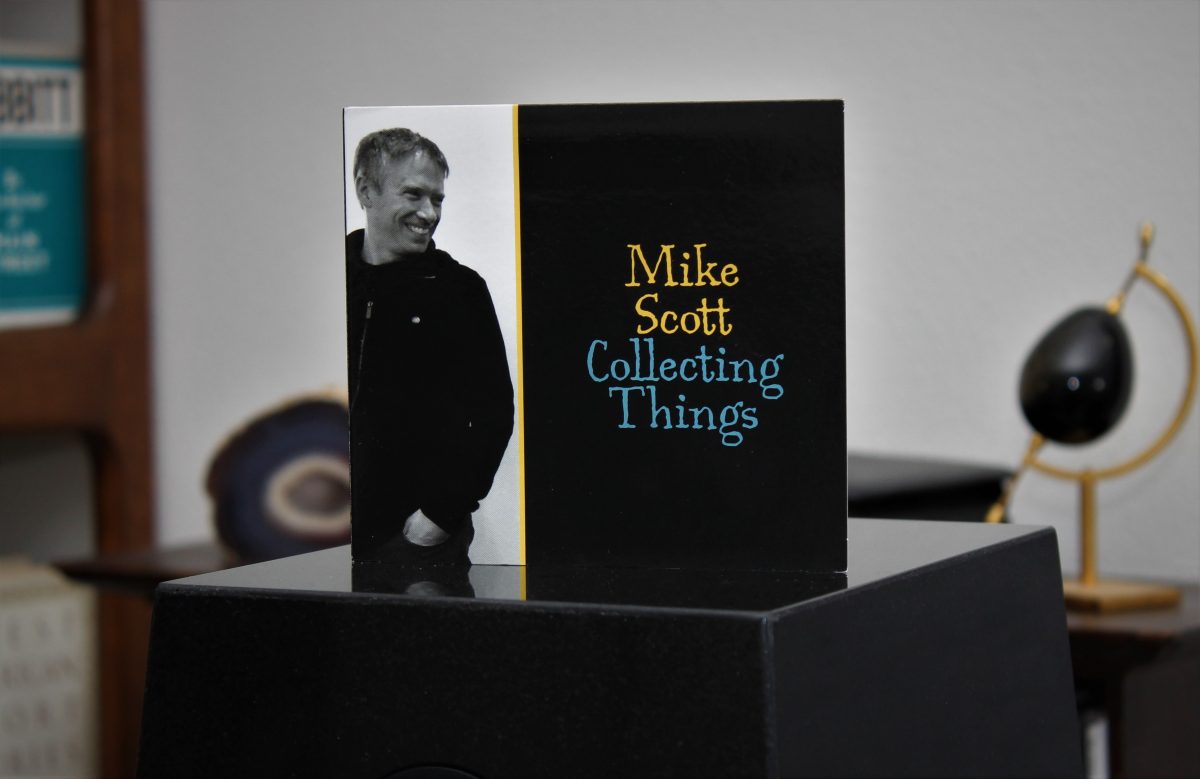 “Collecting Things, the newest recording by guitarist and composer Mike Scott, is a pastiche of music styles mostly penned by Scott and performed by some of the top jazz musicians in Southern California.”

That opening sentence from the press materials seems, on the surface, to accurately describe these ten tracks from Mike Scott (website). Each of the songs is profoundly different in tone. The first track, “Sol Minor Prelude,” is a soft solo on the acoustic guitar, reminiscent of Segovia at his most gentle. The second track, “Sol Minor,” doesn’t seem at all related. It’s sinister and dark, just like the splendidly textured Dimitri Howald from last week, and totally swinging.

From there, Mike Scott and the rest of his quartet–keyboard player Joe Bagg, bassist Darek Oles and drummer Jake Reed–give you a sampler of a great guitar jazz ensemble or, more specifically, an ensemble who started off in jazz and can play hopscotch all through a variety of genres–blues, rock, organ trio, Americana, whatever. (All four members of the quintet have taken their turns as leaders in their own careers.) On the final track, “49,” I swear the foursome is channeling Meat Puppets during the Up on the Sun period, all lean and grizzled and rolling on down the road.

If we circle back to the Southern California reference, yeah, it’s there. Mike Scott is described as having a “calm and sunny demeanor,” and as a SoCal kid I can feel those vibes, the relaxed approach to the notes that bow equally between Metheny and David Gilmour. This feeling is enhanced, to a certain extent, by the excellent sound quality, a warmth and fullness that reminds me of my first years listening to jazz.

That’s one of the strengths, a first among equals, in Collecting Things–Scott has a wonderful tone and attitude throughout this album, providing a melodious core to all those different types of songs. Can he do it all? This album thinks so.

Yimba Rudo is an exciting and unique jazz trio, one that immediately stands out from the crowd due to its instrumentation. Vibraphonist/percussionist Kevin Norton, drummer/percussionist Jim Pugliese and bassist Steve LaSpina offer a minimalist approach […]

At every high-end audio show, there should be something that’s a complete surprise to you. At AXPONA 2022, that came in the form of a small pair of Swiss loudspeakers in the AudioShield room. We’ve […]