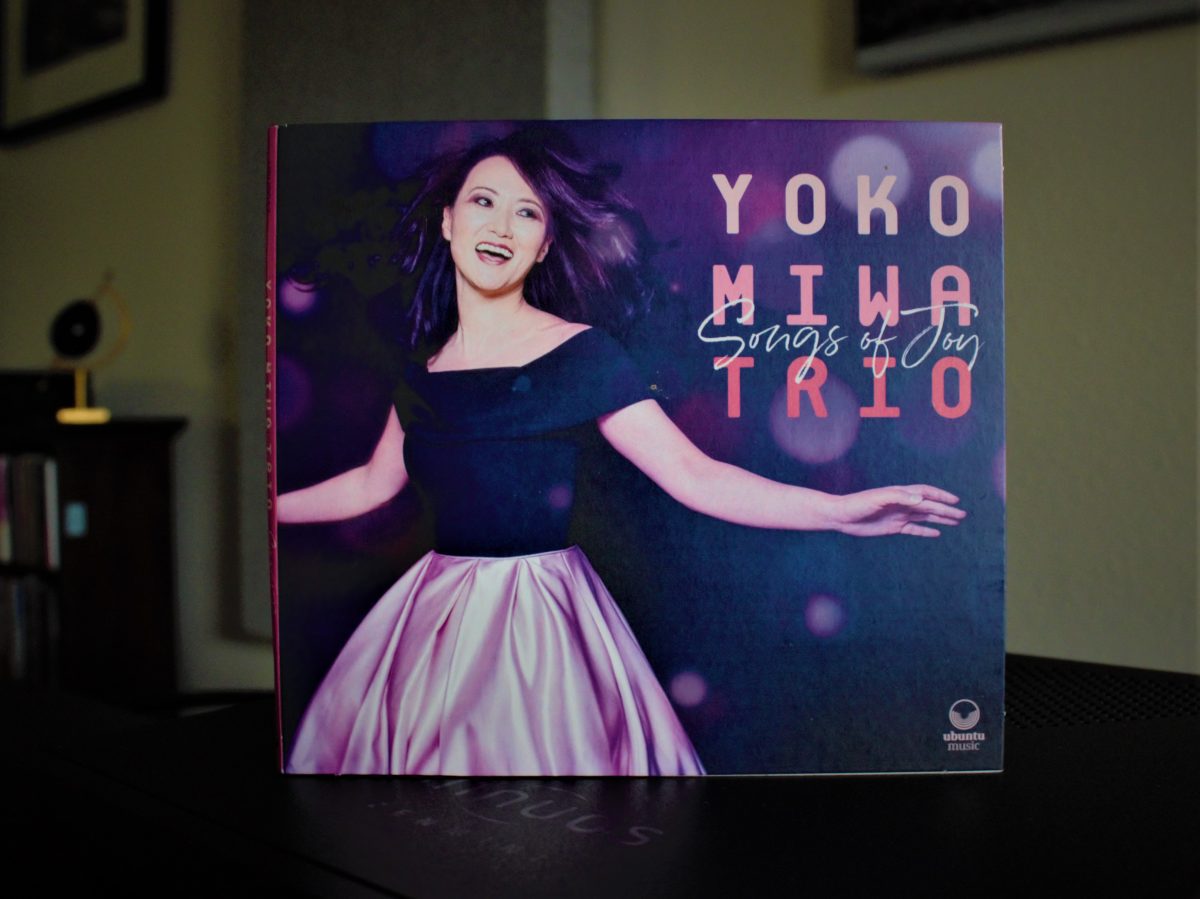 It’s curious that the new album from the Yoko Miwa Trio (website) is titled Songs of Joy. For example, would you consider the Zeppelin classic “Babe I’m Gonna Leave You” particularly joyful?

In addition, pianist Yoko Miwa injects a lot of drama into her playing by creating sheer power, by rolling and tumbling and sounding larger than life. I’ve said that jazz piano trios often needs to sound much bigger than they are to fill in all those spaces on stage, but Miwa starts drifting into force majeure territory and filling up the empty spaces by herself. This trio, which also includes bassist Will Slater and drummer Scott Goulding, plays larger even when they’re being quiet. Not louder, but bigger. That means each musician makes a strong effort in creating a more expansive sound, and they get their energy from each other. (Brad Barrett also guests on bass on the Zep track.)

This doesn’t mean that the Yoko Miwa Trio can’t convey joy. Instead, that joy is supported by so many other life experiences and you can often see them watching from the side of the stage. A Miwa original such as “Small Talk” is certainly upbeat and can swing accordingly, but you get fleeting glimpses of price that was paid to compose these sentiments. That’s when you start thinking about the motivation behind Songs of Joy.

Yoko Miwa had a beautiful live gig in Boston a year ago, and suddenly she didn’t. As I’ve mentioned before, contemporary jazz artists depend entirely upon live gigs to make a living. Recording new albums can be expensive, and sales can look small in comparison to what’s going on in the Top 40. The pandemic really hobbled this community, and those fears and concerns are starting to emerge as a creative force in 2021. I’ve been hearing some fantastic jazz over the last few weeks, and it’s coming straight out of these difficult times.

Yoko Miwa wanted to create something deliberately optimistic with Songs of Joy. She didn’t miss her mark by creating “an uncharacteristically somber set of music,” and there’s plenty of excitement in this album. But I also think there’s something subliminal at work here, something I feel deep in my bones. Things aren’t going to be the same, and nostalgia probably won’t be the cure for our ills. But the Yoko Miwa Trio provides a feeling that’s much more complex than an earnest attempt at cheering us all up. It’s a reminder that we need to stay connected–not just through music, but through the unspoken relationship between performers and their audience.

Oh, and that Zep cover? One of the best thing I’ve heard in months.

Deciding the Best Value of the Year Award for 2021 As we finish out our year-end award season, I noticed that many of the same products that were considered for Product of the Year for […]

The Music List: Is It Really Necessary? | The Vinyl Anachronist

A few weeks ago, I found myself editing an equipment review and I got to that section. You know the section, the one where the reviewer gathers up copious notes on the music used during […]

I’ve been reporting on the Acoustique Quality, Amped and Music Hall partnership over the last few years, especially since I was able to meet everyone involved in Munich in 2019. (Note to self–quit referring to […]