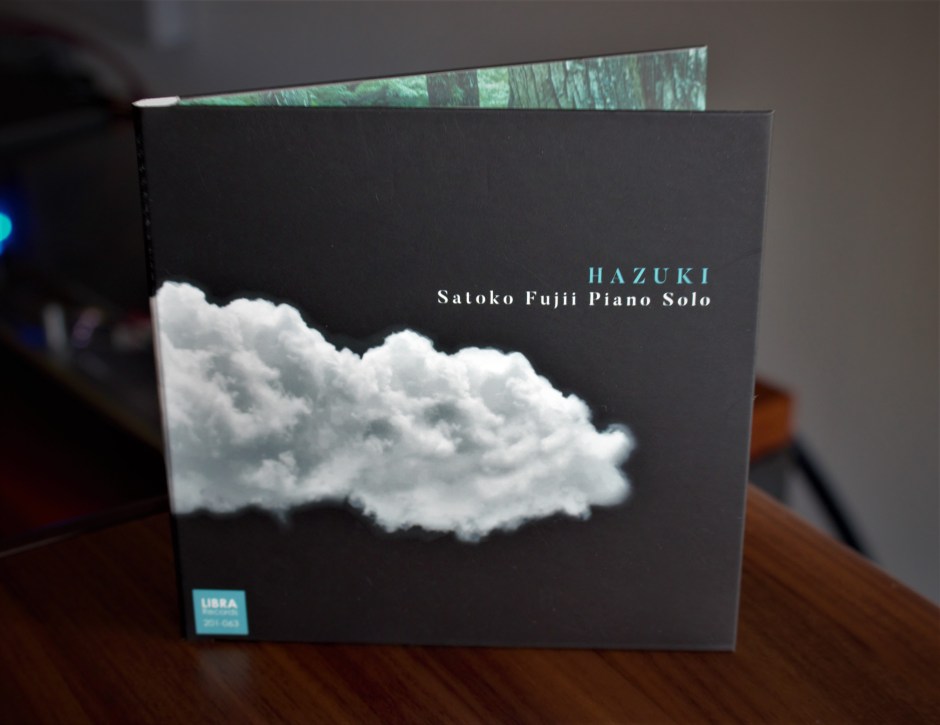 Satoko Fujii’s Hazuki is here, and I’ve suddenly realized this Japanese pianist puts out a lot of recordings. Just in the last few months I’ve reviewed four: Prickly Pear Cactus, Pentas, Futari’s Beyond and now this, a solo piano album that was captured last August in Fujii’s home. Just yesterday, a fifth arrived with Fujii performing a duet with her husband, a trumpet player. All have been released by Libra Records, and all have featured simply beautiful sound quality, although many of these performances can be called avantgarde and might be considered too far out for the average American audiophile.

Once you dig into the story behind Satoko Fujii’s Hazuki, you start to understand why this is such a prolific period for her. She’s usually on the road a lot, performing her original and daring compositions for her fans all over the world. I probably don’t have to tell you the rest–suffice it to say that many of these recordings are duets and trios and are recorded remotely, with lots of digital files being shared. In the case of Hazuki, this is Satoko Fujii alone, in her home, recording during a hot spell in August (which is what hazuki means). Since she didn’t want to bother her neighbors, she kept all of her doors and windows closed despite not having an air conditioner. “I was sweating,” she explains. “I put an ice pad on my neck and that helped a bit.”

Satoko Fujii’s Hazuki, however, is a chance to hear what this astonishing and original pianist/composer is all about. She’s a precise, fluid player, but she also resides in the shadows of her instrument and stretches her music into new shapes. She’s not afraid to drift away from the keyboard and stick a curious hand into the box to manipulate the strings–this is a step beyond so-called prepared pianos because she can create her own duets through counterpoints and solos. One hand plays piano, the other drifts through the air and gets tangled in sound.

Once again this is a reference-quality recording. Fujii also explains that while she’s on the road she’s usually playing a different piano every day. Sometimes the piano is good, and sometimes it is not. This is Satoko Fujii at home, with her piano–the one that she “knows.” The result is music that is intense, strange and sometimes disjointed, but always a feast of odd sounds and magnificent ideas.

Lyn Stanley and I first started chatting through email and social media right after I reviewed The Moonlight Sessions: Volume One on my blog back in August 2017. She’s the type of performer–and there are […]

Thankfully, Hit It from the BK Trio sounds quite different from the seemingly countless jazz trio recordings coming out this spring. Much of that comes from guitarist Brian Kooken, the BK in BK Trio, […]

Deline Briscoe‘s tremendously original Wawu reminds me of the first time I listened to Somesh Mathur’s Time Stood Still. Both times I was headed down south to visit with Scot Hull in Maryland, and I […]